Kayaking With Ray, Seasick and a Bald Headed Eagle

Ray and I kayak Jenner

I met Ray at the Jenner boat ramp this morning to go for a yak. We put our boats in the water and headed down towards the open river’s mouth area. It was high tide and the river was muddy from the recent rains. It looked to be a nice day and it was. 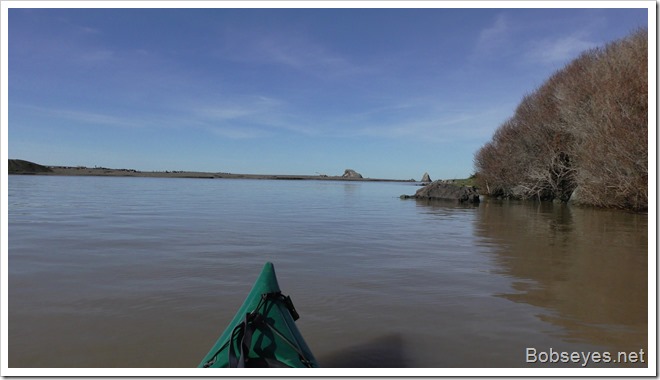 Lots of stuff comes down the river when the water comes up. Here’s someone’s dock that got away and floated down the river. It seems to have a rope snagged on the river’s bottom here that’s why it’s still here and not out in the ocean someplace. 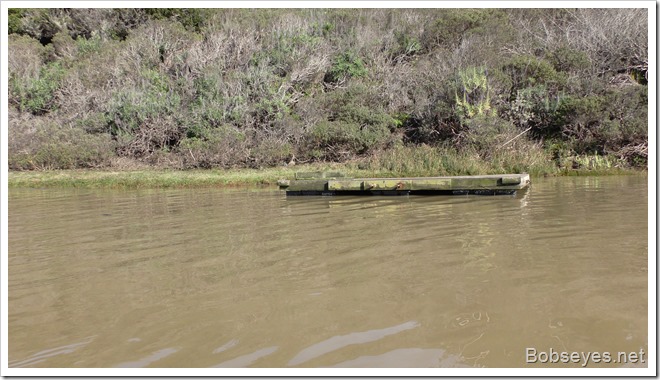 We are headed down to the river’s mouth where the river goes into the ocean.. See that swell just in front of me. Not good for a person who gets seasick easily like me, especially looking through the camera. 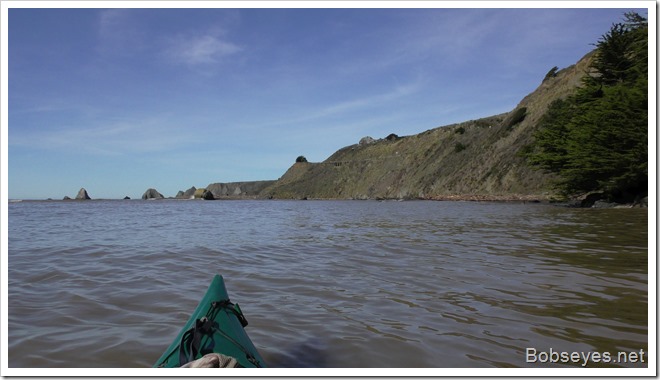 The mouth is wide open and with the high tide the oceans waves are coming into the river making the swells. That’s the mouth out there and I’m not getting too close as I’m getting sick instead. 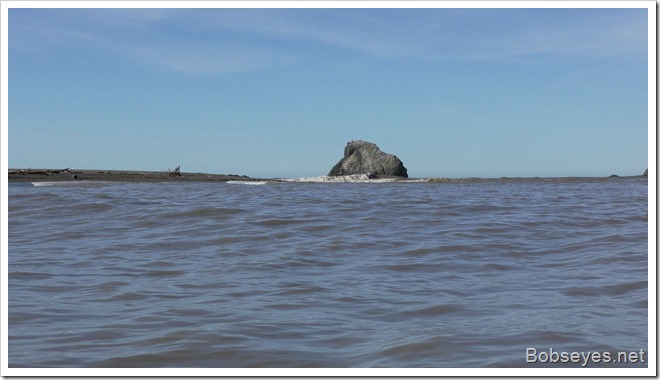 We didn’t stay long and headed across and up along this side passing by this little table that got away from someone up river. 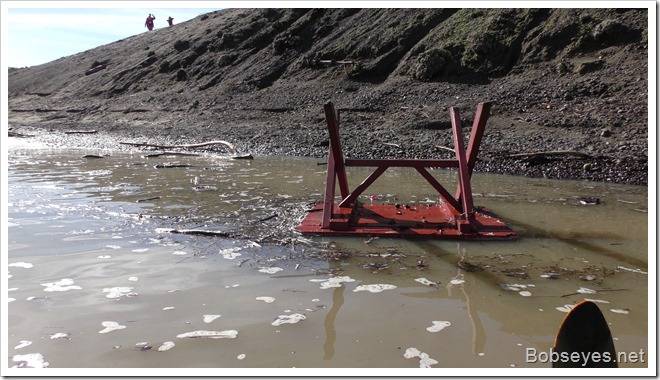 Anything coming down the river is open for salvage if one wants it, but we didn’t.  I was starting to feel a bit better but once it hits it stays for quite some time but not as bad.

Ray and I sat over in this area for a bit which is the lower end of Penny Island where we mostly got out of the swells but even here there were still some. 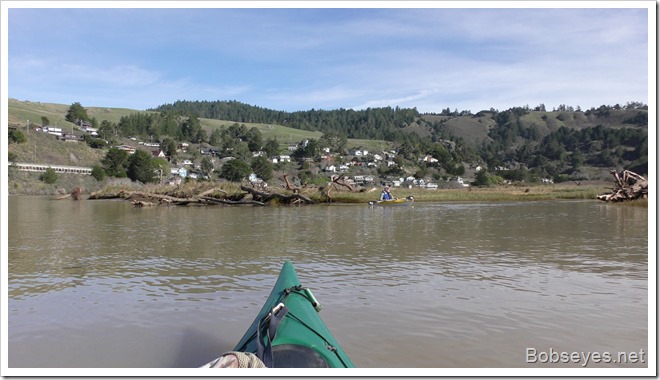 We paddled up the back channel of the island and saw this thing up ahead which turned out to be someone’s old zodiac. The river is also a dump for people’s junk that is old and worn out that they want to get rid of. 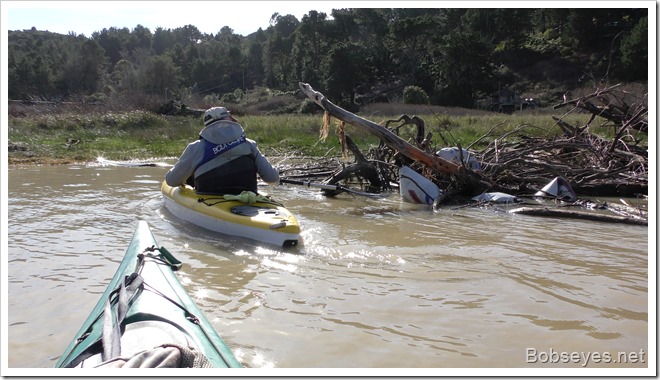 We continued on up the river along it’s south side and saw an eagle land in the big trees here but it took off as we approached. 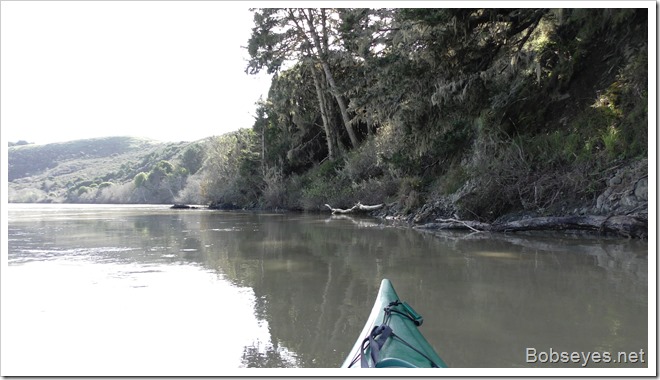 Ray is looking up into the big a trees to see if he can spot any more birds but he didn’t. 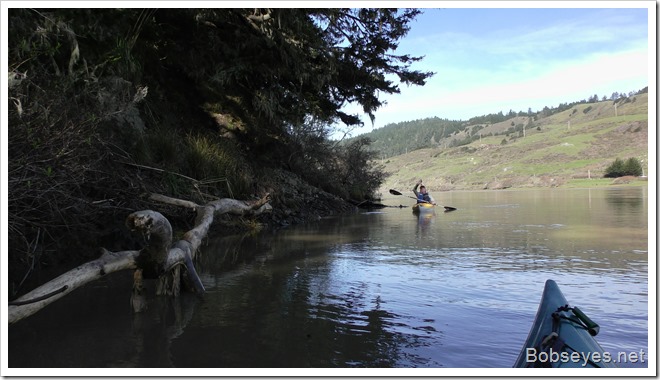 We continued working our way up to this spot I call Muskrat where these mallard ducks where resting. They took off and we rested there instead. 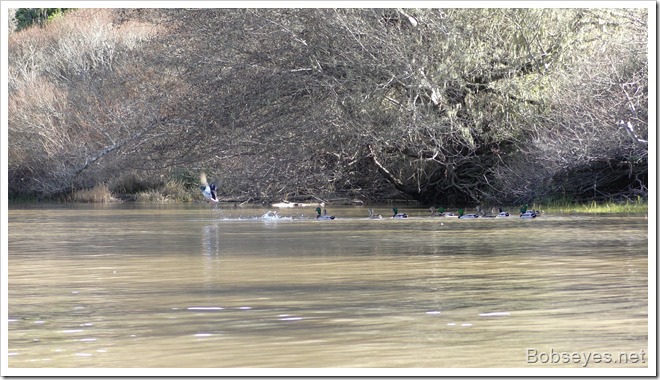 From there we crossed over the river to the other side to see what we could see. The river’s current was enough we didn’t have to paddle much as we were now gong down the river.

There were some geese along the way. 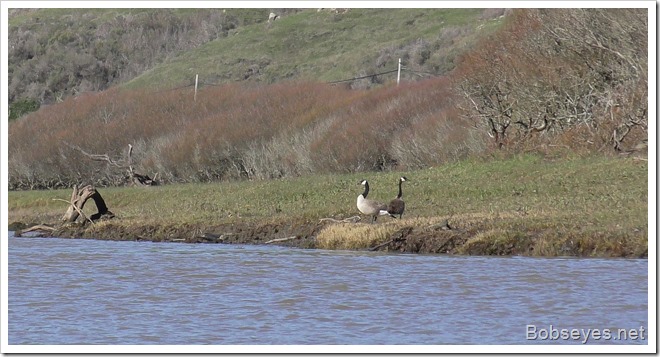 Is that an eagle

This is the view of Jenner from the area of Paddy’s rock. Is that an eagle up ahead in the water? 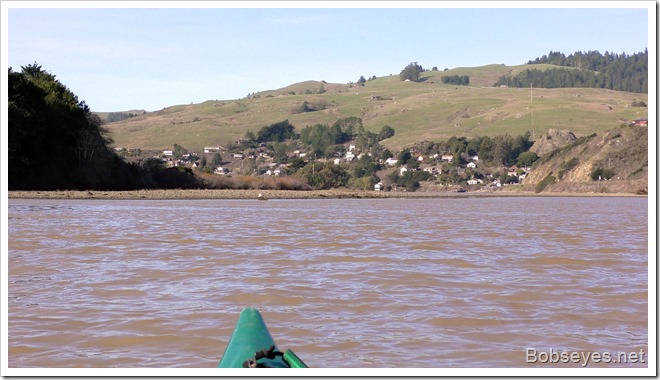 Sure was and it stayed put as we approached. It seemed to be taking a bath. 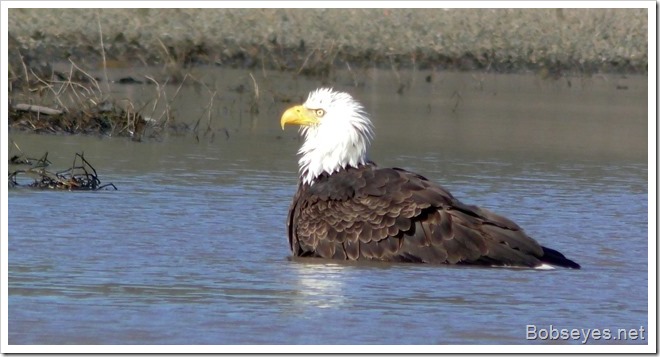 The wind came up a bit about this time and it was blowing my boat around making it hard to get pics of the eagle, but I kept trying anyway. 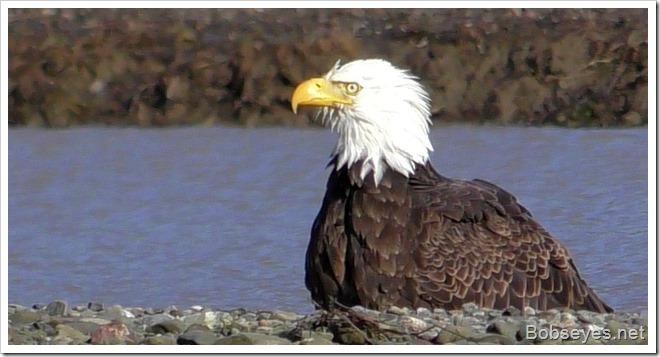 We continued down along the side of the river. This time of the year the male merganser ducks show up to mate. They are gone someplace else most other times of the year and only the females are here. One female and four male ducks. 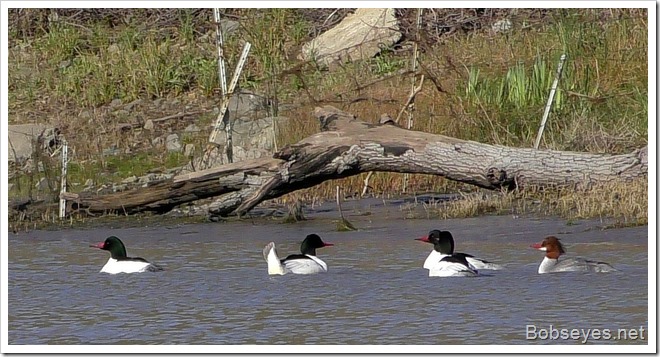 We headed on in to the boat ramp and pulled our boats out and went on home for the day.

This is the second day I used my new Panasonic video camera. I use it to take stills. I like some things about it and something’s I don’t. It seems to take pretty good pictures but is a lot slower than my other cameras. Its seems to have a better automatic focus then the other cameras. Cameras have a hard time focusing on black so the ducks above came out pretty good with the new camera. I guess I’ll keep it.

When I got home I went to the mail box as my new Wi-Fi extender was supposed to arrive and it was in the box so I looked at that a bit and set it up which was fairly easy and I’m now trying it out on my chicken camera. The extender seems to be doing the job but I want to try it in some other modes to see what works out best.

That was  my day for a good one.

1 Response to Kayaking With Ray, Seasick and a Bald Headed Eagle