Got rid of some junk

This morning my brother Tom had the junk man here to get rid of some of my junk and his junk. I was still in bed when I heard them out in the yard loading stuff onto the guys trailer with Tom’s tractor. I got rid of a bunch of stuff including my old van engine that I replaced last summer and about six small engines that were no good and a bunch of other no good stuff.

Once I got it going, I drove down to Monte Rio to Charlie’s house. He had a problem with his old tractor. He couldn’t get it started. He was messing with the alternator regulator and had a wire off. I told him he didn’t need that to start his diesel tractor and had a look at what he was doing. It would click, but not turn over. I looked at his battery terminals and could see they were too old and wouldn’t tighten up, so told him he needed to buy new battery cables. He was also using a cheap jumper cable which meant the wires were too small to pass enough current to start a tractor.

The end result was I told him to buy new battery cables that had good connectors on them to the battery and if that didn’t fix it, the battery was no good.

Charlie’s pointing to the battery cables. 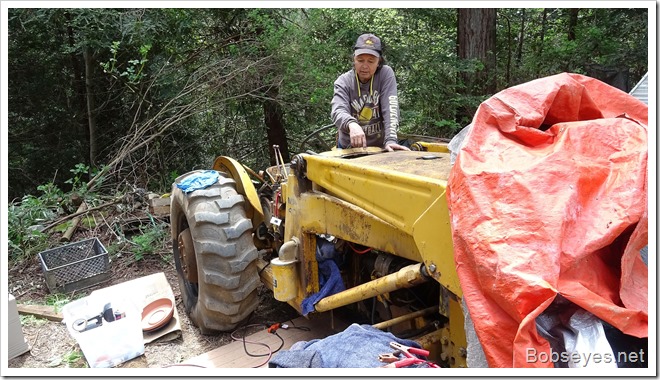 Mud at the boat ramp

I shot the bull with Charlie for a bit, then took my boat down to the Monte Rio boat ramp. The water had dropped since I was last down there and exposed more mud. I considered not going kayaking here and go down to Jenner because of the mud, but figured it was likely windy down at Jenner, so decided to work my way around the mud. Most of the mud was sand and had hardened up enough to walk on it, so I put my boat in the water. 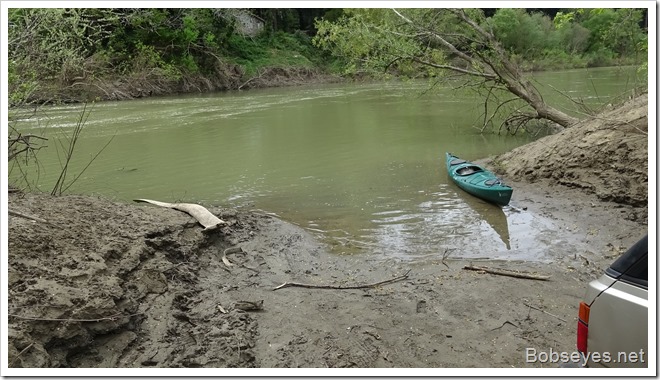 This male mallard duck swam up to me just after I got in my boat. 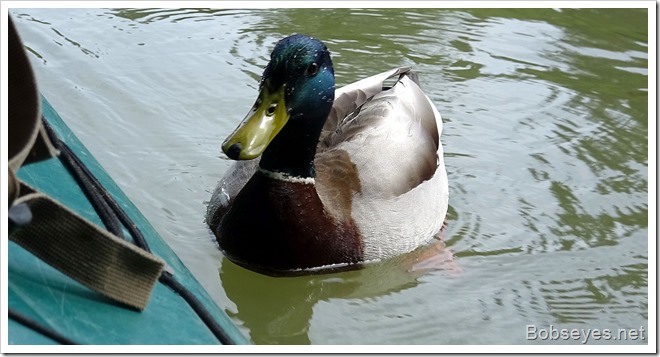 I put the boat into a drift down stream which looked like this. 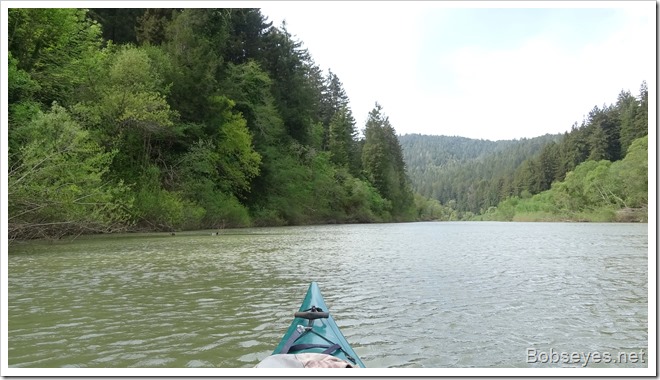 I paddled by this pair of mallards feeding in the shallows. 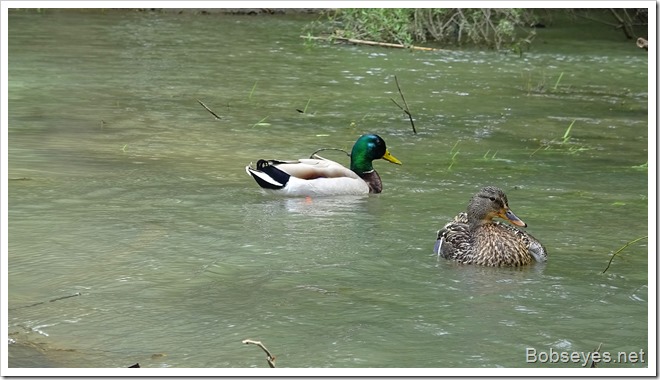 Not sure what this guy was doing

Across the river from those ducks this guy was setting up this equipment. I didn’t talk with him, but it seemed he was leveling off an area for a dock or something? 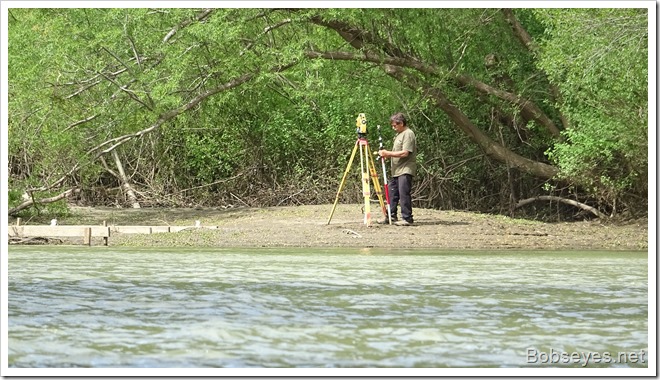 Sitting at the Villa hole

I continued drifting down river to the Villa Grande hole just up ahead where I sat in my boat and watched. 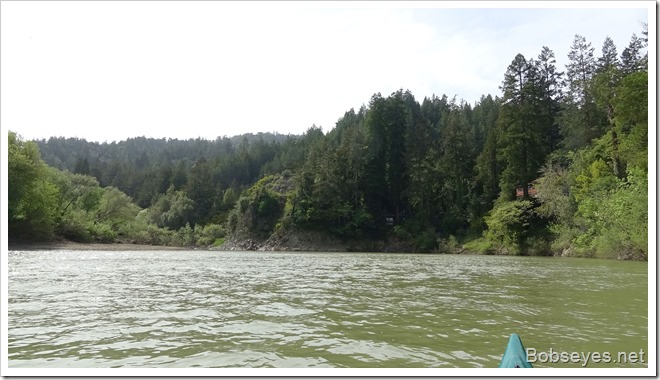 While I was sitting there anther mallard duck swam up to me, swam around me and paddled away. 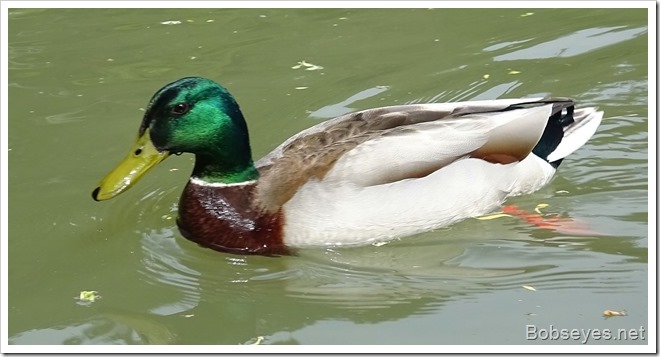 I sat at the Villa Grande Hole for about an hour and then started back up the river, heading back to Monte Rio. 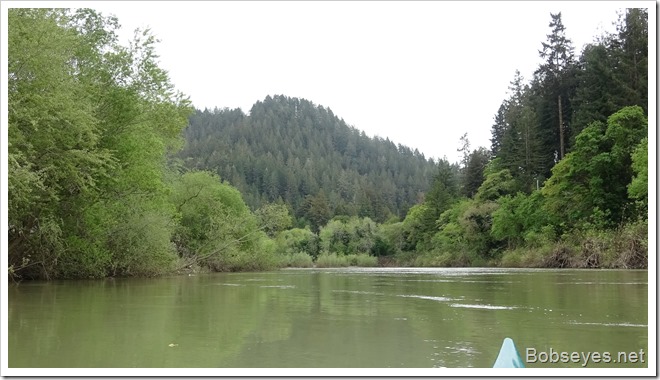 I heard a crow cawing and spotted it in a redwood tree. 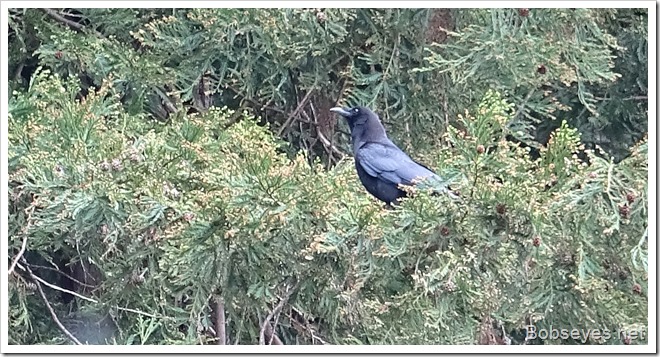 Within about a half hour, I was back at Monte Rio headed over to the boat ramp to the left of the bridge. 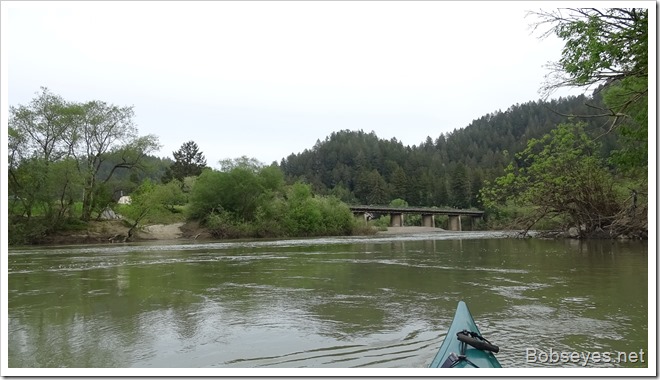 I put my boat on the car and went on home for the day.

It wasn’t out of gas

After a break, I went outside and put gas in the weed mower and tried to start it up, but it would not start up.

Yesterday I thought the weed mower had run out of gas when the motor quit, but I was wrong, something else was wrong with it and it wouldn’t run.

I pulled the spark plug and looked for a spark and there was none. I took the flywheel off and cleaned the magnets and still no spark. I monkeyed around with the wires looking for the problem, but still no spark at the plug. After I checked all the spark making stuff out with no luck, I finally tried another spark plug and that worked. I hadn’t checked the spark plug before as it was fairly new and looked ok, but the plug just didn’t fire. I looked through my junk and found a new auto plug that worked and it fixed the problem, so I put it all back together.

And finally I can mow

After a short break I mowed the rest of my yard which took about an hour. I’ll likely have to mow it two more times before it all dries out and stops growing.