While reading my email once I got it going this morning Ray said he’d be down at Jenner kayaking today.

So off I went. His truck was in the parking lot, but he wasn’t around. I figured he’d paddled down to the mouth area. I put my boat in the water and headed down that way along here. 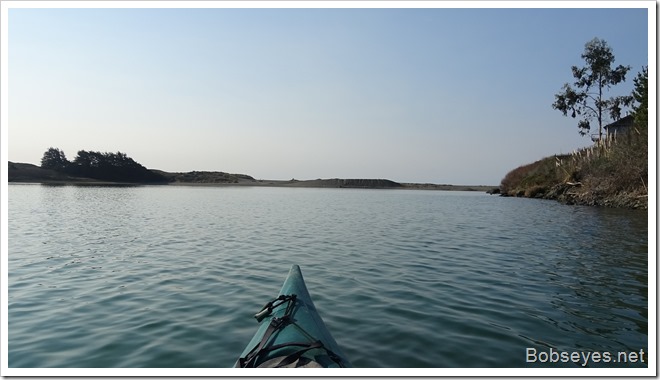 Stuck  tight on a rock

I was paddling along at a pretty good clip when my boat ran up on a rock that was just below the water surface and was stuck on it. Now I had to get off the rock without tipping over and getting my camera wet. I was really stuck good on the rock and couldn’t back off. The only thing to do in a case like this is to use the paddle and push on the rock to cause the boat to rotate around the rock and hopefully slide off it without turning the boat over. I had to work at it, but the boat finally moved a bit and I was able to get off the rock without getting wet.

Headed down to find Ray

Here I am headed to the mouth area where the white is which are ocean waves breaking over the jetty rocks. 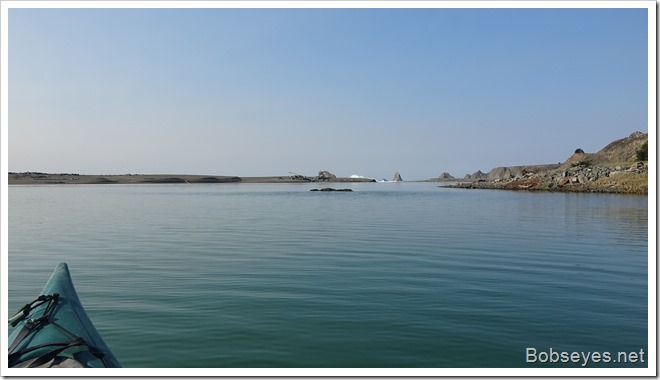 That must be Ray

There was a guy down there on the sand. Since I didn’t see Ray’s boat on the water I figured that was him and it was. 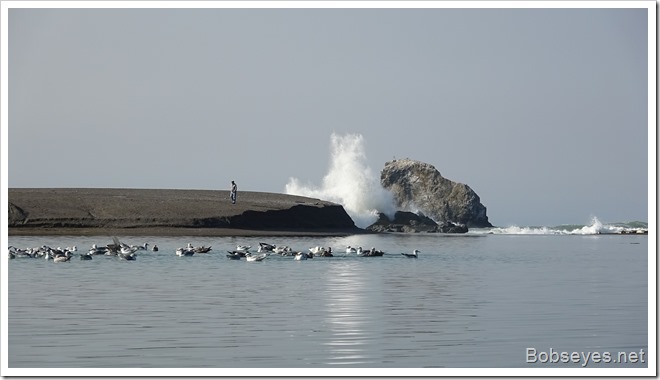 He got back in his boat and we hung out in front of the open river’s mouth for some time watching things. It was a nice day. 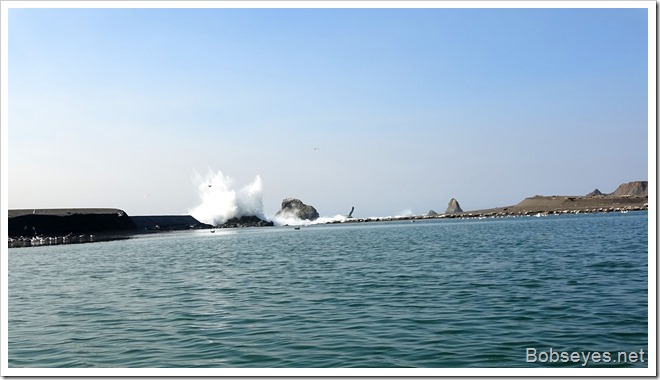 The harbor seals looked content, here’s a few of them resting on the sand. 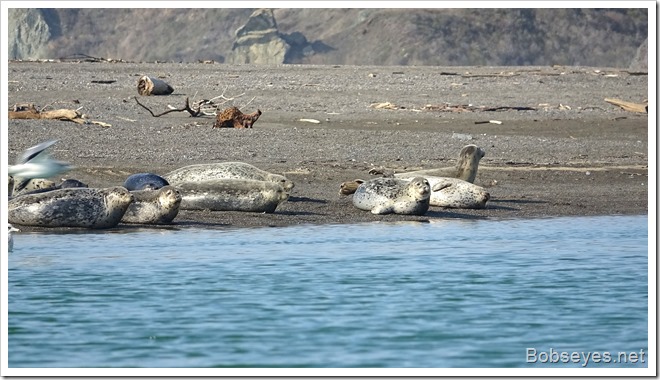 Ray and I watching things

Here’s Ray and I sitting in front of the open mouth watching things and just enjoying the day. 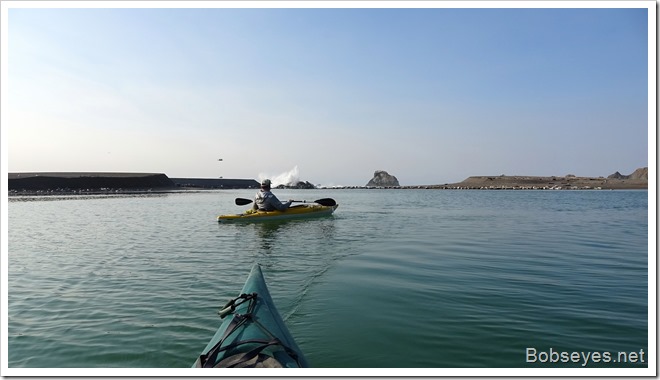 Eventually we headed on up the river going up the island’s back channel. Just as we were entering the channel, Ray says there’s an eagle which just landed on the lower end of Penny Island. It was eating something. 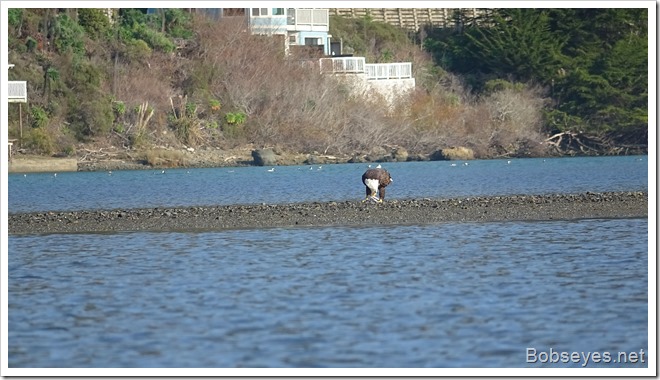 I’m not sure what exactly it was eating, but I’d guess the head of a big fish which was likely left over from the seals. 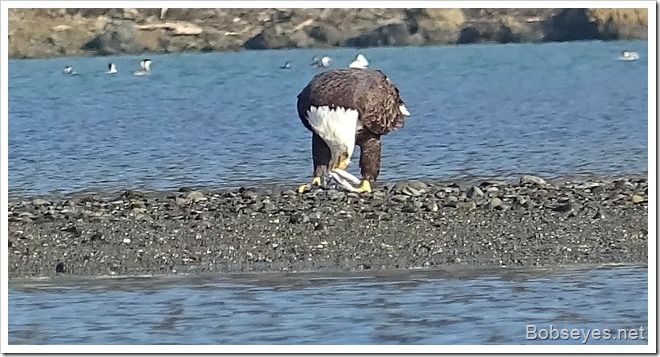 We continued up the back channel at a leisurely pace going by these mallard ducks. 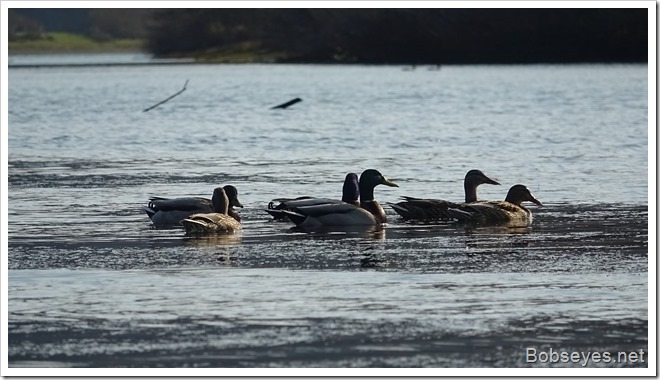 Guys in the poison oak

We paddled up to Eagle’s Landing where we were sitting in our boats when we heard some Spanish speaking guys on the hill behind us. 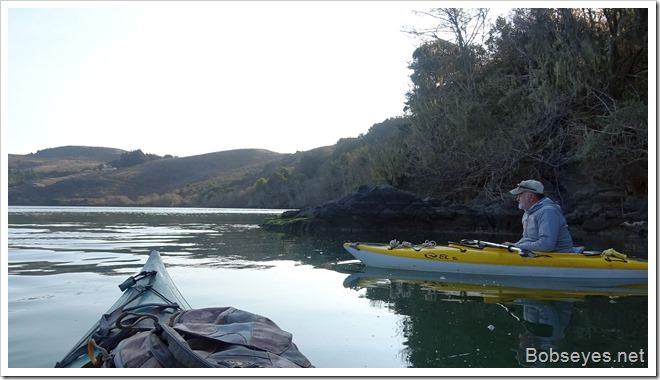 That area is full of poison oak and no one goes there except me and my friends. But once a few years ago I found some Mexican guys working for the state spraying non native plants, the white things there. At that time they had on full white suits, but not this time. 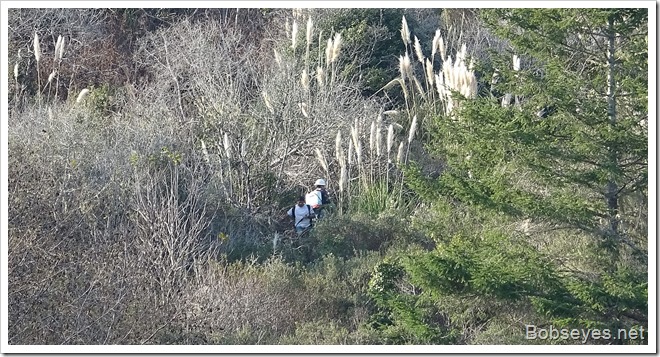 I hope they don’t catch poison oak as they were in it up to their ears and it sounded like they were cutting it with their machetes too. It’s actually useless to spray the non native plants, a waste of money as there are so  many seeds in the ground that you could never eradicate it.

Not many birds around today

We had to go out in the middle of the river to see the guys which put us over by Paddy’s rock, so we continued on down that side where there are usually a lot of birds along the shoreline, but not today. Could be the eagles scared all the birds out of this area?

Ray is pointing to a red tailed hawk which might also be part of the no bird thing. 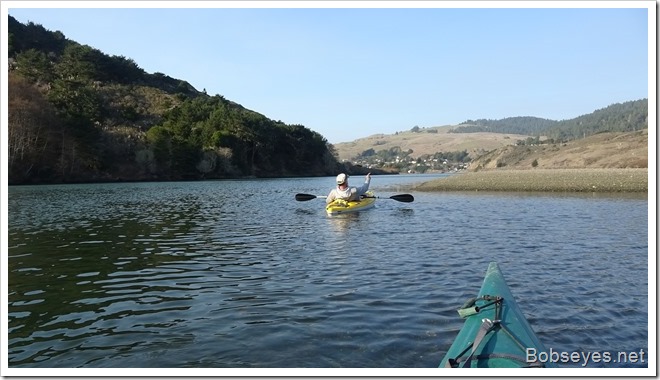 We did find this group of ducks down the shoreline. they were all together and grouped, so I think the eagles scared them. 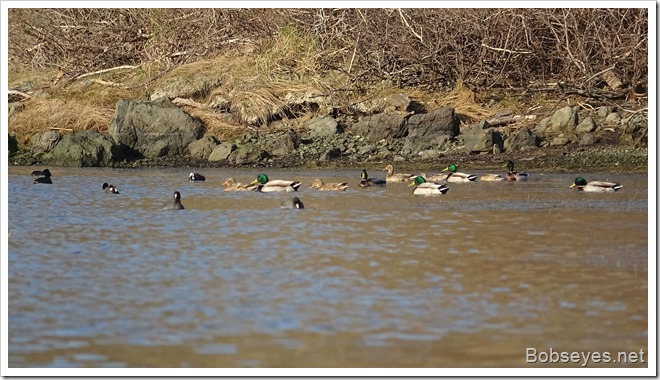 We were slowly paddling along here when a sea lion surfaced by us fairly close and didn’t seem to mind being close to us which was unusual. 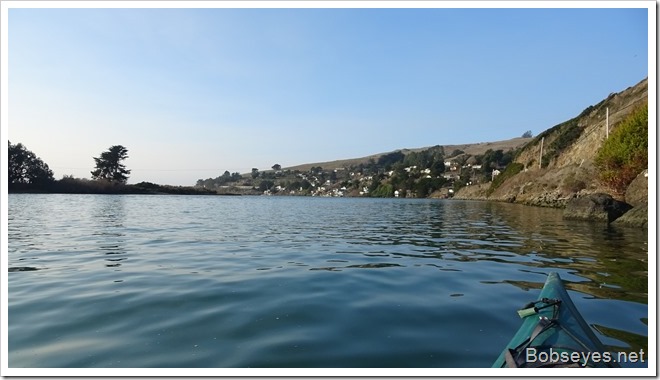 Here’s the sea lion fishing near us and headed towards the boat ramp in the direction we were going. 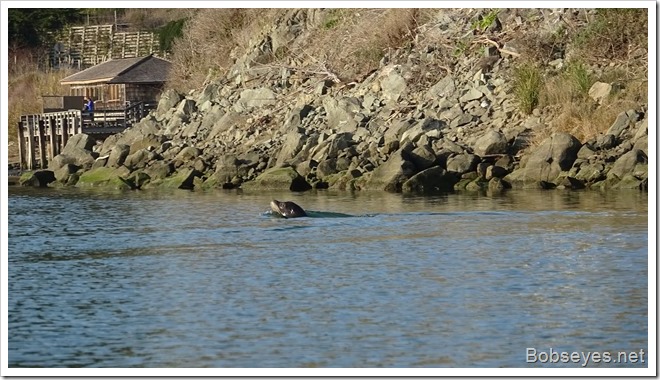 When we got to the rental kayaks we found the sea lion here in the boats which is odd. 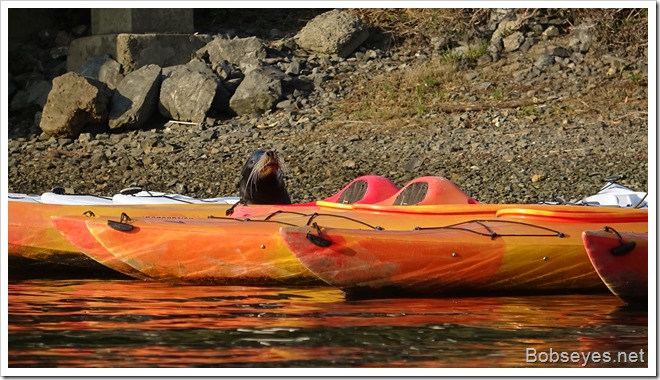 I got this close and was looking at the sea lion which appeared to be mostly skin and bones, a young one only a year or two old. 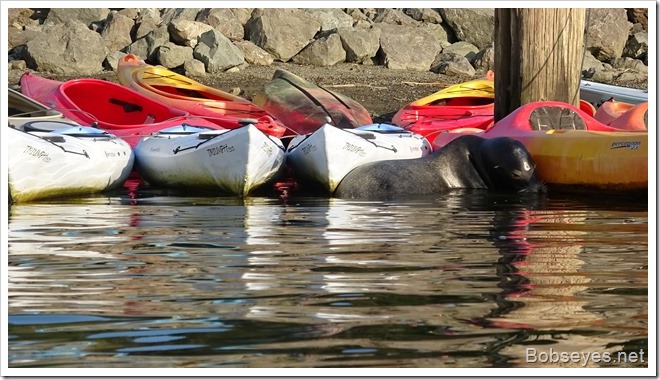 It actually climbed into one of the boats and was resting there until someone came down to the boat so it left.

We thought it must be one of those see lions from the bay area which rest on the docks by the people down there, that’s why it wasn’t too afraid of us. I thought it was looking poorly.

We pulled onto the boat ramp and went on home for the day.

When I got home the sun was already behind the mountains so I didn’t get anything done in the yard today and went in the house where it was warm.

An email from Salmon Creek Ranch

She sent me an email on what citric acid is made from saying it was made form citrus fruit, but she failed to read down.

The top part said it was made form citrus fruit, but reading down, it said it was now grown on corn which she and the meat processors missed.

And you will see in that article citric acid now comes from corn since 1917.

It’s much cheaper to make it from corn than citrus fruit.

In 1917, American food chemist James Currie discovered certain strains of the mold Aspergillus niger could be efficient citric acid producers, and the pharmaceutical company Pfizer began industrial-level production using this technique two years later, followed by Citrique Belge in 1929. In this production technique, which is still the major industrial route to citric acid used today, cultures of A. niger are fed on a sucrose or glucose-containing medium to produce citric acid. The source of sugar is corn steep liquor, molasses, hydrolyzed corn starch or other inexpensive sugary solutions.[10] After the mold is filtered out of the resulting solution, citric acid is isolated by precipitating it with calcium hydroxide to yield calcium citrate salt, from which citric acid is regenerated by treatment with sulfuric acid, as in the direct extraction from citrus fruit juice.

And white vinegar is used in many, many things like mayonnaise, most of the salad dressings, most condiments and it goes on and on.

So eventually I’ll get these people trained and  maybe be able to get some good beef.

It’s a real battle to get away from.