I Was Having a Nice Paddle When It Started to Rain

I headed on down to Jenner to kayak for the day. It was overcast, but the wind was down as I put my boat in the water and paddled across the river to Penny Island to decide which way to go today.

Since it was coming up on high tide I decided to head down to the river’s mouth area to have a look, so I’m paddling down along Penny Island here headed to it’s bottom end. 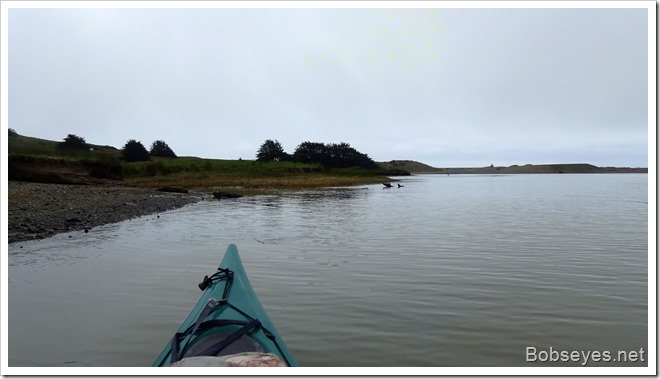 I paddled on down to the mouth area and went past these cormorants resting on a submerged rock. 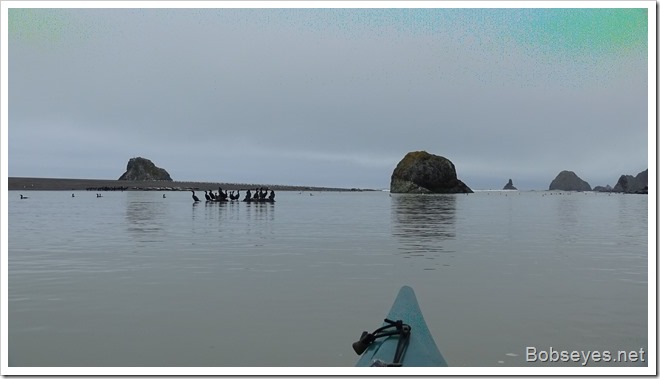 I paddled around the cormorants as I wanted to paddle into the area in back of them which is closer to the open mouth. 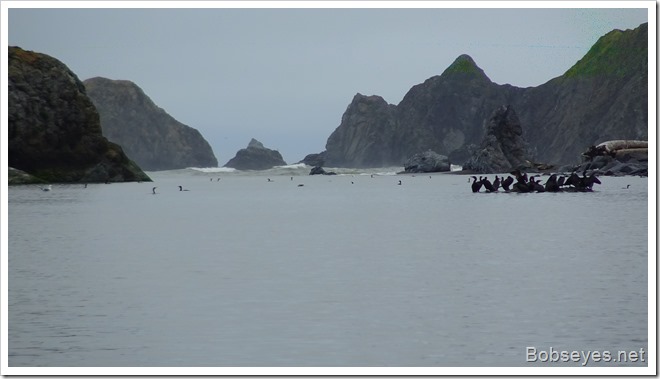 There were lots of birds and seals in the open mouth area. 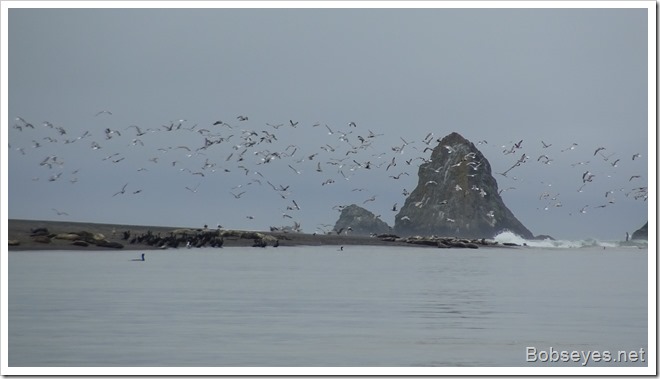 I wanted to go just a little further past this other group of cormorants, so I paddled in behind them and they took off. This is looking out into the Pacific ocean through the open river’s mouth. 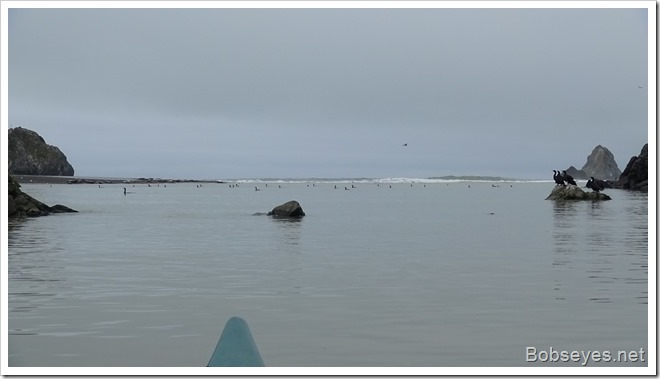 Cormorants fishing where the water is clear

I hung around the area for awhile checking things out. The cormorants are down here near the ocean fishing as the water is clear enough to fish while up stream the river is still fairly muddy. 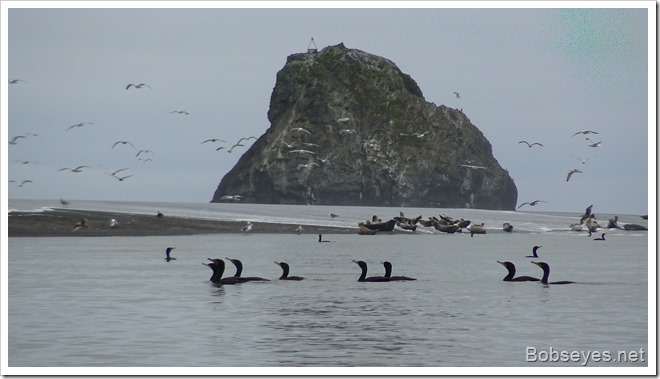 Eventually I started to head back up the river. It looked like some rain clouds were coming in and I might get wet. 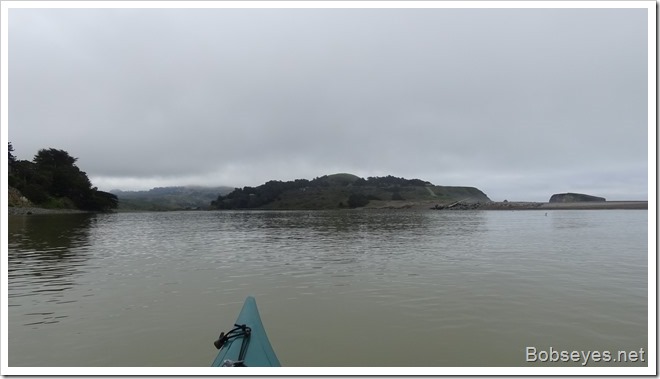 It started to sprinkle lightly, but they were big cold drops that looked like snow melting as the drops landed.

I was crossing cover here near the bottom end of the island when I saw a bunch of splashing off to the right. I could see the harbor seals were doing something over there. 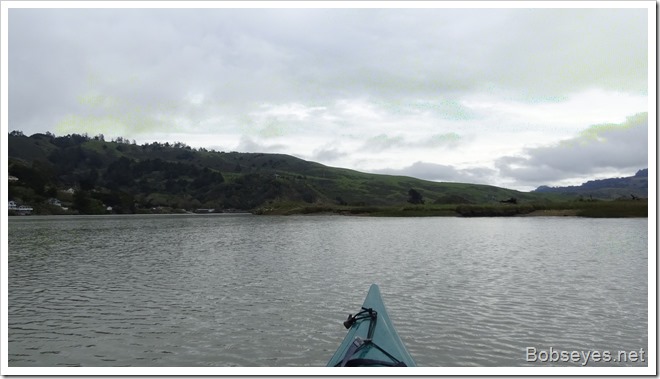 I thought maybe they had some big fish they were eating, but it appeared they were just frolicking in the water. 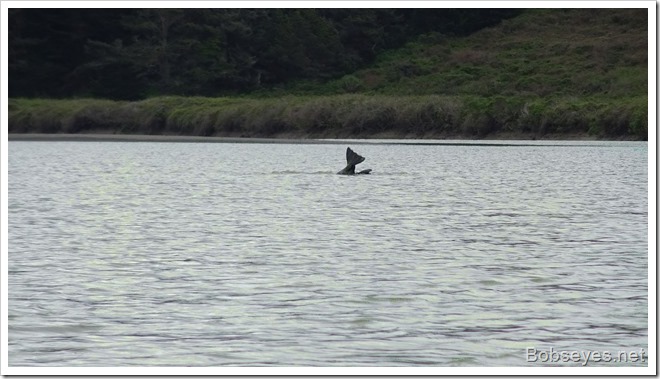 I was still getting hit by some big rain drops as I paddled up along Penny Island so decided to turn in towards the boat ramp from here. 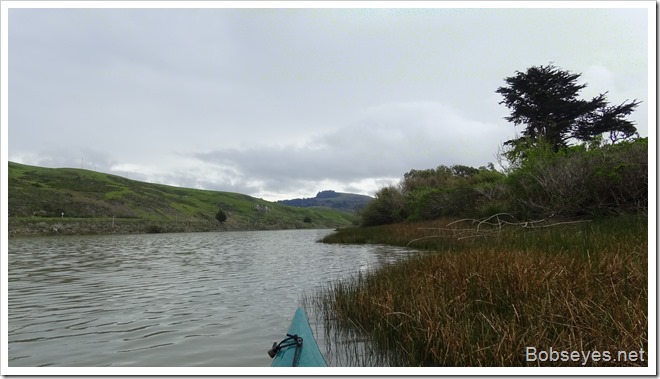 The rain drops stopped and the little wind there was died and the river went flat for a bit. 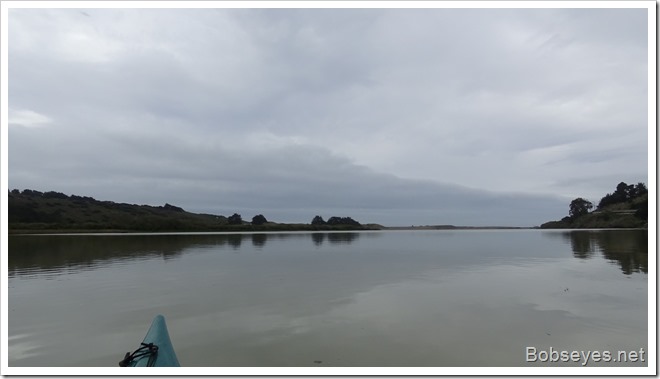 I could see it was going to drop some more rain, so I paddled on over to the boat ramp and went on home for the day. The rain drops picked up as I was driving away from Jenner.

It was just barely raining when I got home so I went in the house for a break. Eventually I went outside where the rain had stopped.

Worked on the garden enclosure too

I worked on the garden enclosure until just before dark and now have all the side frames constructed. I started the roof part. I’m making a support beam out of the rebar to help hold the roof wire up.

I was working on that when it started to get dark, so I put my stuff away, covering up the welder in case it rains some more and that was my day.