I Thought the Hermit Was Dead When I Visited Today

I hadn’t been up to see how the Hermit was doing in quite some time so I thought I’d drive on up through the state park to visit him today.

The park is closed because of the recent forest fire but lucky me the gate was open this morning so I didn’t have to use my key to get though it. 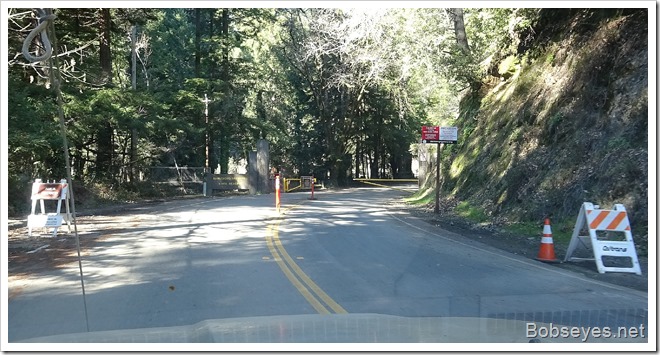 People recognize me because of my kayak

Since I carry my kayak on top of my car they all  know me by now and I got several waves from park employees as I drove on through.

The picnic grounds are full of fir trees they cut down during and after the fire went through so now they are trying to get all the logs cut up into firewood. 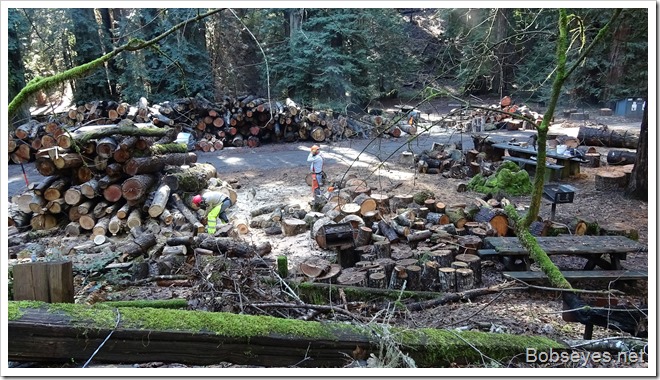 Just above the log area I ran into a neighbor, Laura P. coming down the steep hill road so we stopped in the road and  shot the bull until another car came down the hill and we had to move.

I ran into these park guys taking out a small road slide and shot the bull with them for a bit. 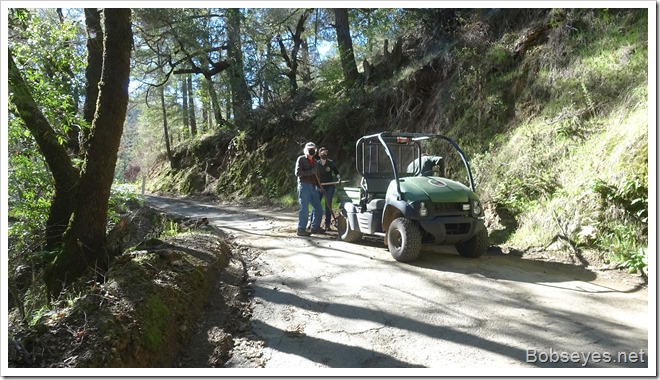 When I got to Nathan’s place I noticed someone was doing some work on his driveway but no one was around so I drove on in.

The Hermit  has a little bell with a pull rope up under the eves in this picture and I always like ringing it to rise the Hermit. 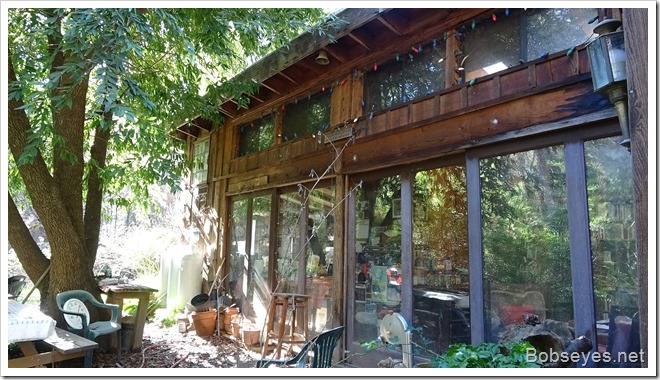 Well I ran that bell and there was no response. The TV was going and loud but no one seemed to be around so I walked around his yard for a bit checking it out. I thought he might be out shopping as Wednesday is the day he usually does that but then the TV shouldn’t be on load.

He’s in there but is he alive

Well, I thought maybe he is home and just didn’t hear me so I went back to  his house and looked in by the TV and saw him looking asleep in a chair there. Oh, oh, was he dead?

I went in the house and shouted at him but no response, he didn’t move but I could see he was breathing. 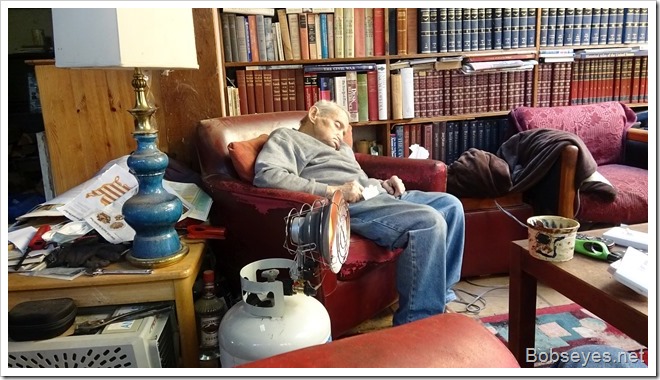 What to do, could I call someone. I went over by his phone to see if there where any emergency phone numbers written on the wall but there was none. Hummmmmmmmmmmmm, now what.

I finally decided to give him a good shake. At first there was no response but after several times doing that he started to move and eventually woke up. Good he’s still alive.

Now that Nathan was awake we had a good talk and he told me he had been in the hospital with no energy but they found out he was retaining too much water and gave him some meds to improve things which seemed to be working as I’d say he was much better than when I saw him last.

He said Tim a guy that’s been helping him out was working on putting some rock on his driveway and should be back soon with another load of rock which was good as I wanted to talk with him.

We chat with Tim, his helper

We heard him coming up the road in his truck so we walked down the hill to the driveway to chat with him. Nathan was getting around much better than last time. 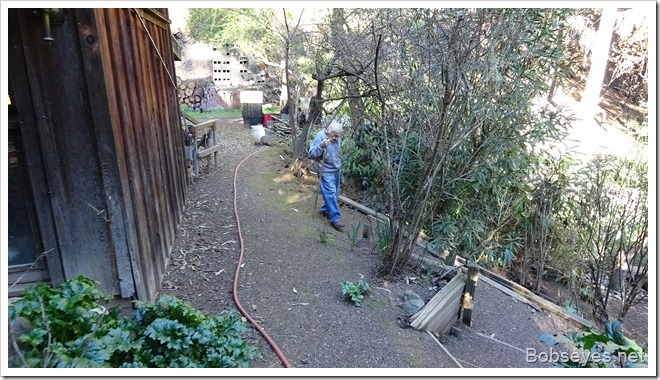 Here’s Tim unloading the rock from his truck while Nathan checks out his work. 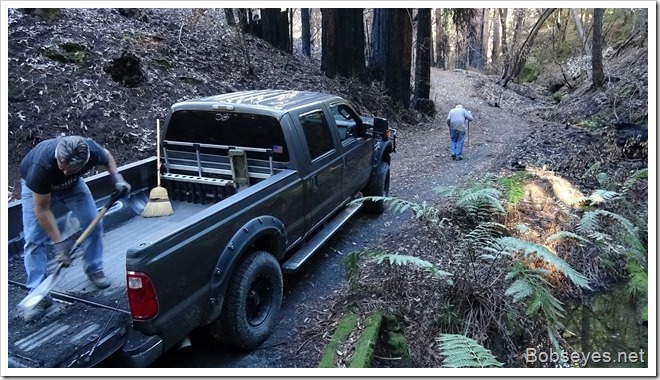 Tim is in line to get Nathan’s place when he goes and is real excited about it. We had a good chat about some stuff.

Eventually it was nap time for Nathan so I said my good byes and headed down the road.

The forest fire burned through this area last summer. It’s looking good now with all that new spring grass. 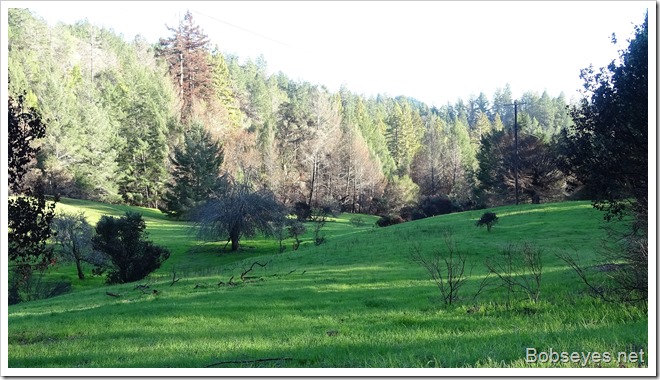 I continued down the road headed through the park to my house. 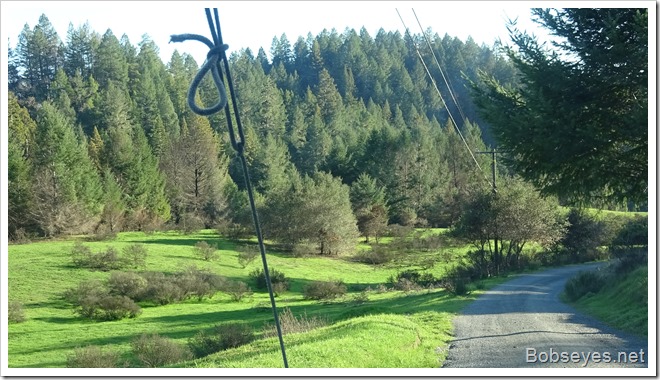 On the way down I ran into Laura P. again just above where I ran into her last time on the way up, so we shot the bull again until another car came down the hill and we had to move.

Back down through the park and I was home for a nap.

Tom comments: You mention your great grandfather. Mine bought our place behind Berry’s mill in 1876. He left us a lot of roads too. I wonder if they knew each other.

-Tom, the fisherman at the Monte Rio ramp who wasn’t as interested in your chickens.

Hey Tom, it’s very likely they knew each other as my great grand father was a Teamster and did a lot of work for people around the area. In those days a teamster was a person that had work animals and wagons and stuff to do work for people as no one had tractors or trucks in those days so when you needed something done you called the teamster and he brought the animals and equipment needed to do what ever job needed done. He had a hauling contract with the mine on East Austin creek before the train went in from Cazadaro to Red slide up along East Austin Creek.

By the time I got home the day was almost gone so a bit of chair hopping and the day was done.