Two posts today. The one below this one is first. Posted from Hawthorne Nevada.

Once I got it going this morning I headed on up highway 395,  north towards Mono Lake. 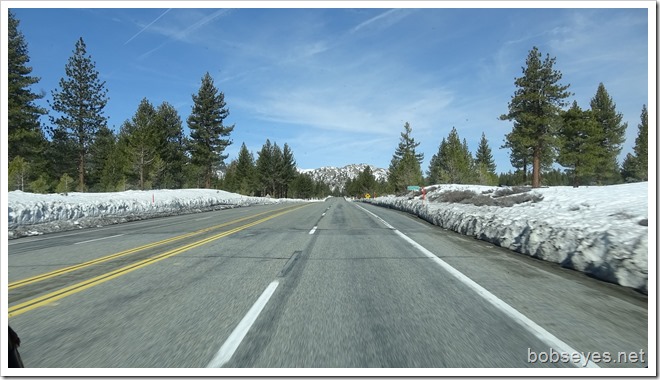 This was the road I took down to Mono Lake. You can see it up ahead, even the island I paddled to. I’m looking for Navy Beach where it’s easiest to launch my boat. 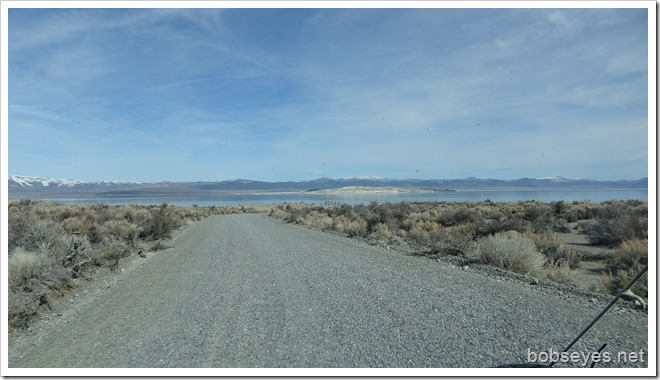 Cautions about the winds

I arrived at Mono Lake about 11AM. There where signs all over warning about the wind coming up on the lake and it advised being off the lake by noon. There was just a breeze right then so I decided to have a look around and wait an hour or two to see what the wind might do.

Here’s what Mono Lake is mostly all about. These things are called tufa’s. It tells you how they are created in the photo so click the photo to enlarge it so you can read it. 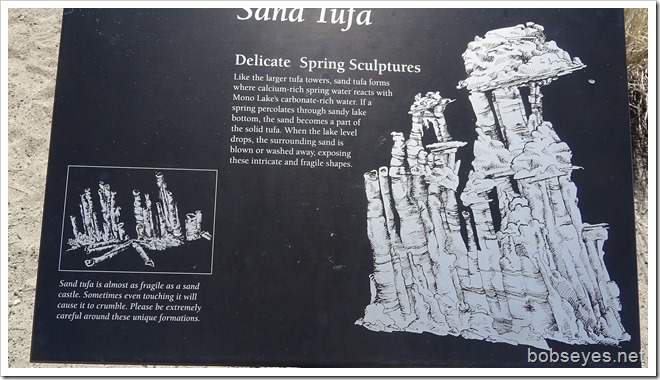 I took a little walk around where the van was parked and ran into these tufa’s about six feet tall which was how high the water level of the lake used to be when they were formed. 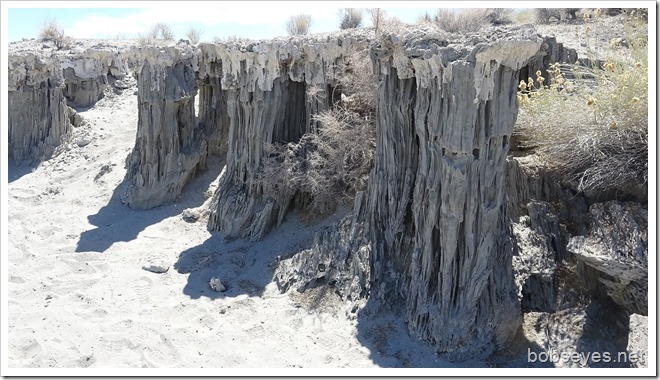 The lake was looking inviting with only a light breeze blowing. I waited until 1PM and decided to put the boat in the water. Better do it while I can as it might be windy tomorrow, who knows.

My plan was to paddle over to the island and maybe around the back of it. The island looked like it was a mile or so away, but that can fool you.

Map of my paddle

Here’s a map of the paddle I did. The  yellow dotted box is more or less where I went. I headed for what looked like the right side of the island to me from the water which turned out to be about 3.67 miles a bit more than I expected.

Here’s the map with my route marked on it. I started at the bottom right, paddled to the right side of the island then down along the front edge of the island and back across the lake to what they call South Tufa where there’s lots of Tufa’s and then back to the starting point of the bottom right. Looks like I went about 8.32 miles total in 3  and a half hours. 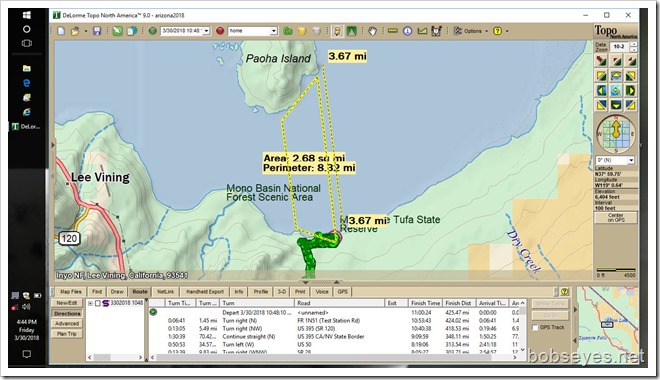 Paddling across to the island

It’s 1PM and I’m getting my stuff and the boat into the water and going to head to that Island you can see, sorta. 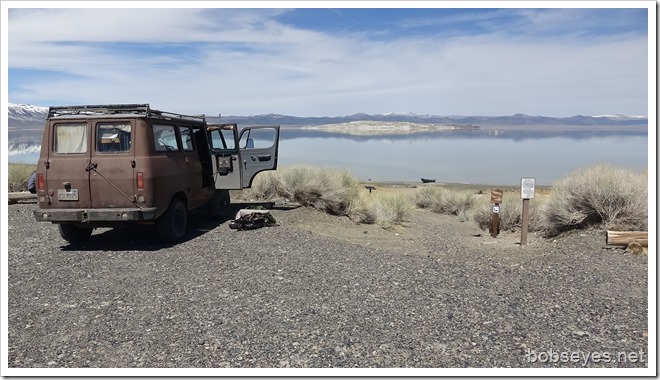 I’m set to go and the wind is down, headed for that white looking island. 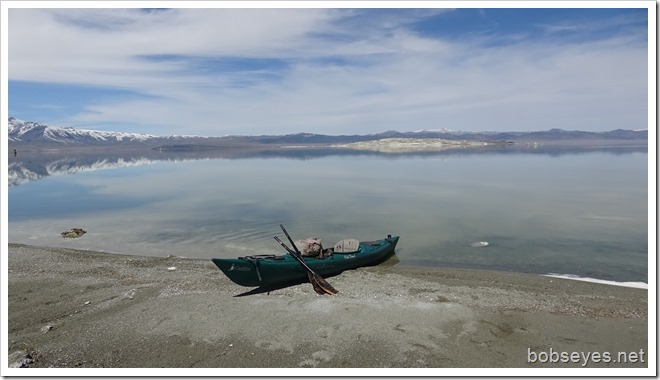 These were the first tufa’s I ran into. They were about 8 feet high. That’s the level the lake used to be at before LA starting diverting it’s waters. 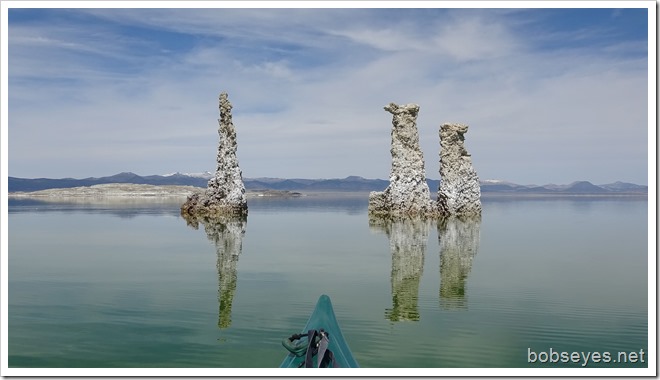 Reflections were messing me up

This is what I had to paddle through. The reflections from the mountains are running into the island which is making me sick, motion type as it seemed to be messing with my mind. So I had to head more to the right side of the island so I wasn’t looking into that snow in the water. 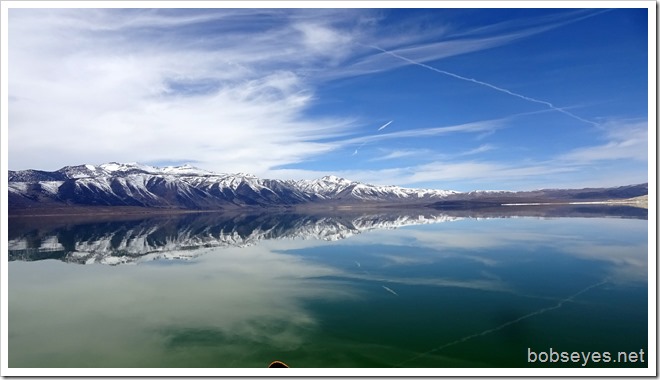 I went by this ball out there and I thought it might have been the mile to the island marker but I was wrong as I paddled much more than a mile to the island after seeing it. I’m paddling to the right side of that island and it’s still a long way off. 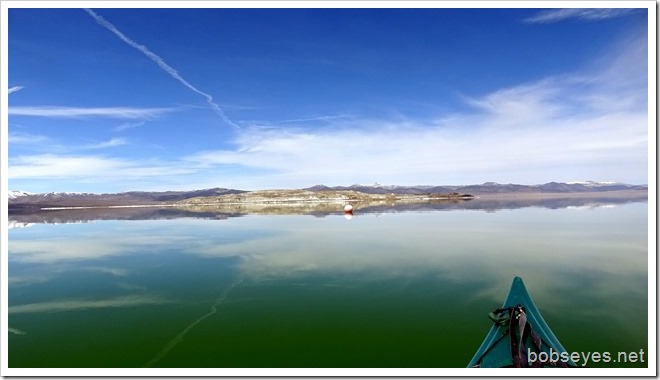 It seems a long way across

It seems like I’ll never get there and I thought of turning back a couple times as I wasn’t sure if the no wind would hold up. If the wind came up, I’d have a hard paddle back across the lake. It looks like it’s just up ahead, but it’s further than it looks. 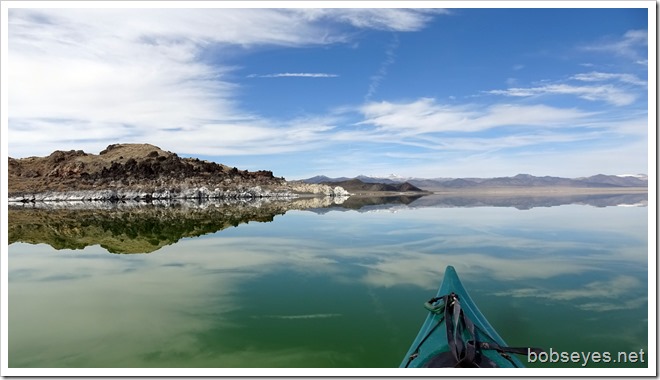 After about an hour and a half of fairly hard paddling I made it to the right looking end of the island and it looked like this. 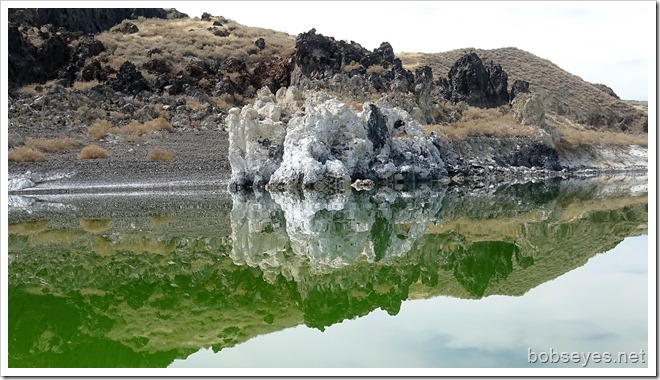 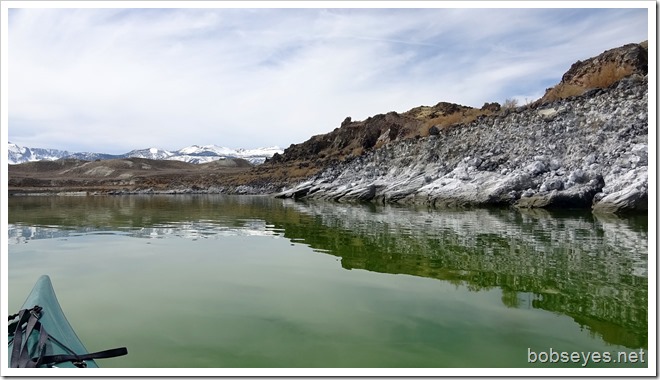 I paddled by this lone grebe. I also saw a few ducks take off by the island. 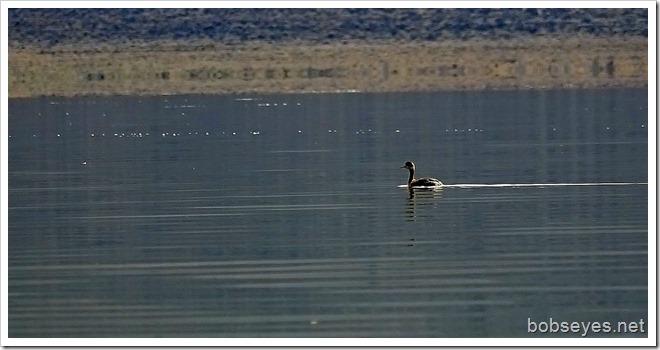 I’m paddling along here up to the end of the island there where I’ll start back across the lake to the other side. 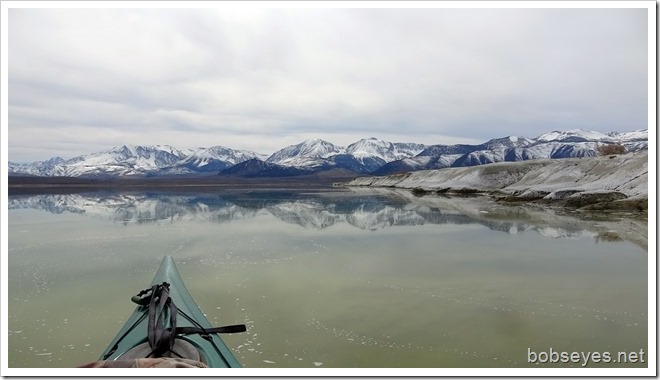 Paddling back across the lake

This was one of my views as I paddled back across the lake. 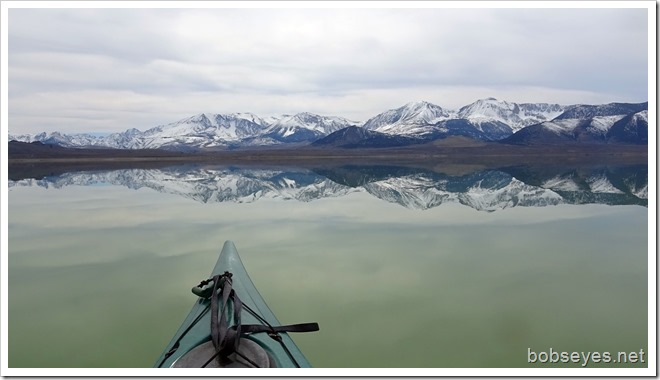 I’m headed towards that white mountain just left of center where I can barely see a dirt road that comes down to the lake that goes to the South Tufa day use area. 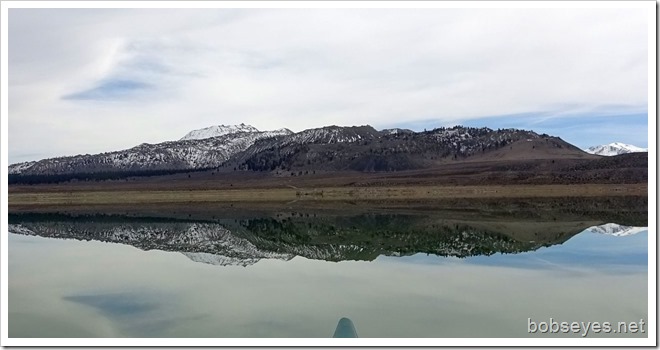 As I approach the Tufa area these tufa’s come into sight as I head over to them. 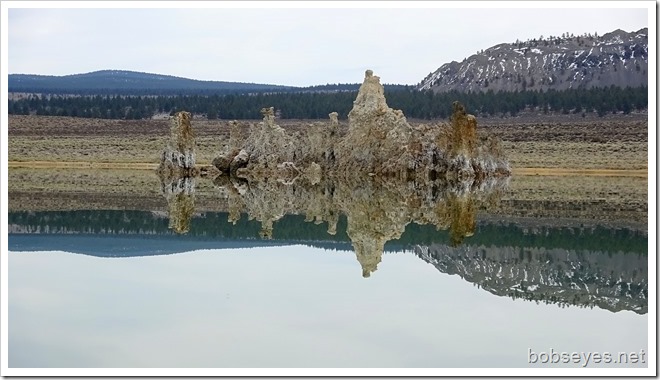 I paddle around the tufa’s and check some of them out. They all have big time reflections from this angle. 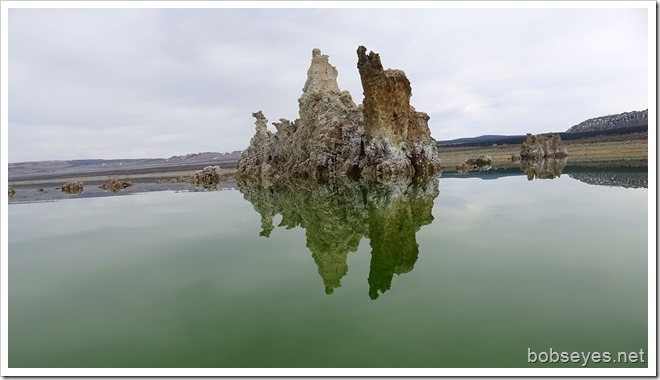 I paddled on by this one headed over to where the van was parked and where I launched earlier. 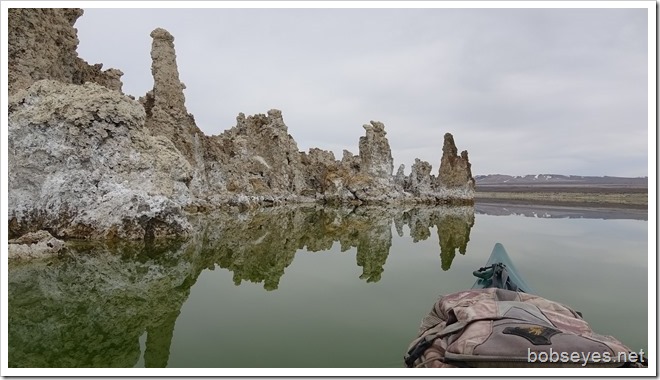 This is Navy Beach boat launch area. No fee here, but there is one  over at the South Tufa area. 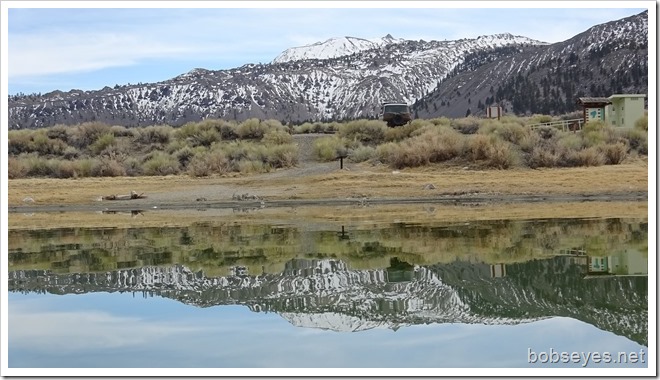 I took my boat out of the water and washed off some of the white stuff it picked up from the water. My arms hurt so bad from all the paddling I could barely left them to do things, especially my left arm. I had to use my right arm to help lift my left arm to do things and it hurt.

If I was to do it again, I wouldn’t go across to the island but I’d go left up along the shoreline towards the South Tufa area where there are plenty of tufa’s to see without so much paddling and having to be so concerned with the wind. Plenty to see and much safer from any high winds that might pick up.

I got all the stuff loaded and needed to find a camp spot as there was no camping here.

I saw some four wheel drive roads on the way in not far so I took the first one to the left which is out of the lake restricted area so I can camp.

I drove about a mile down this dirt road before I found this place to camp. I overlook the lake with is off to the left. 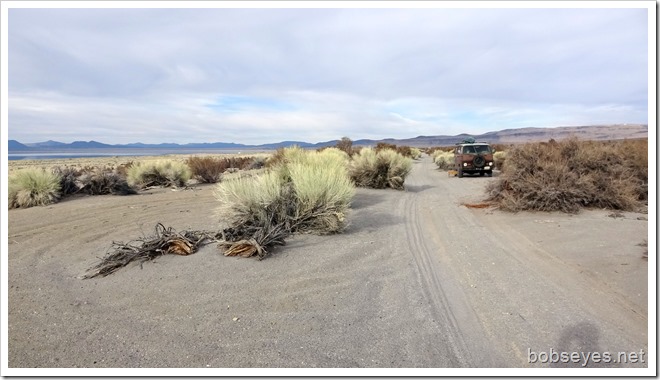 My arms are feeling much better now after a good rest.

Tomorrow I’m going to head north on 395, headed towards home. Not sure what the day will bring, which way or how far I will get. I’ll post this blog when I find some internet access somewhere.

When I got on highway 395 today shortly a sign said the road was closed ahead which actually turned out good as my day went from long day driving to a short day driving and much slower.

So the new plan is to go to Fallon Nevada where there is a place Marty and I once visited called Stillwater Wild Life Refuge so I plan to check out the area and camp somewhere there tonight and maybe tomorrow head on home or not?