Minding my own business when

My plan today was to start making some chicken roosts in the runs. I was sitting out there getting the tools and materials I’d need together for the job. I sit and think about what I need and go get it and sit some more and eventually I have what I need and can get started.

Heard a commotion next door

I was almost ready to get started when I heard a commotion next door at my neighbors place and then I hear get some water. I looked up and saw some smoke showing me we had a forest fire in the  making.

I ran to the house to call 911. The 911 lady had a hard time understanding me as I seemed to have beat myself heading for the house and my back started to spasm which made me harder to understand. Once I was over that enough I asked if she had any other calls for fires. Yes, Sweetwater Springs Road. I said good, that’s it and said I was going out to see what I could do about the fire.

Forest fire in the making

The fire was only about fifty feet up the hill and one of the neighbor guys was trying to move fuel away form it with a rake at the top. They had a hose but it only made it to the bottom which was useless. I started to organize the people there as most didn’t know what to do. I shouted someone get another hose. Shortly I saw a lady packing a hose over so helped her hook it to the other one and took it up the hill to the top of the fire to head it off as if it gets going any more there would be no stopping it without air support. The guy up there raking moved off to the side as it was getting too hot and he was tired out and I started to wet things down and put some water on the fire in between times I was wetting things down. I knew I didn’t’ t have enough water to stop the fire cold, but if I could at least slow it down until the fire guys could get on the line it would be good.

Fortunately for me I’m an older guy with lots of experience doing things. I’ve got some experience with Cal Fire running a bull dozer on a ranch on so called controlled burns that got out of control and lucky they had a bull dozer standing by. That was back about 1982. I’ve got more but that will give you the idea, so I knew what to do.

A sheriff got there first and insisted we come down off the hill or the fire guys couldn’t work, but they weren’t quite there yet, but I could hear their trucks coming through the apple orchard. I told him I’d come down when the fire guys got on the fire as I didn’t want it to get away now. He kept insisting, but I stood firm and kept spraying my water and it looked like I was winning.

Just after the sheriff was done with me a small bush flared up in front of me. They give off intense heat when they get too hot and burst into flame. I had a plan already as that’s what you do if you want to survive, have an escape route planned and ready to go. My out was a 5 foot diameter fir three at the top of the fire where I was working. I ducked behind it and sprayed water around the side of the big tree to tone the flare up down and  from spreading up the hill and yes I was thanking the big tree for being there, not that it cared one way or the other, ……………but I sure did.

I still  smelled some smoke in the evening so I went back over to have a look and didn’t see any smoke.

There’s the five foot fir tree I took protection behind when that bush on the left started to flash off. Thanks again tree. 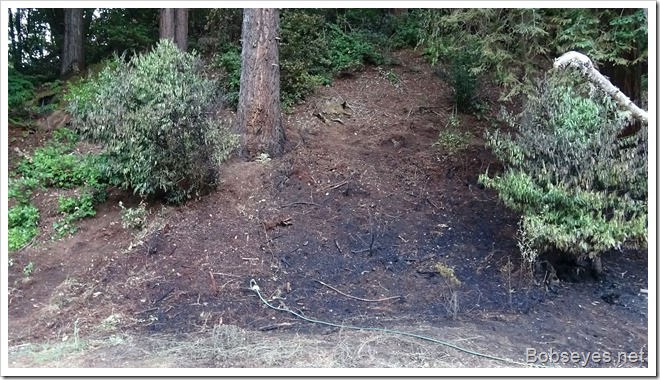 oh and the yellow jackets have found their nest hole and are doing well. And no they did not attack me. :O) I suspect they’ve had enough trouble for one day.

Trucks started to arrive and the fire guys got their hoses out. This is shortly after they arrived as I had no camera while I was fighting the fire. 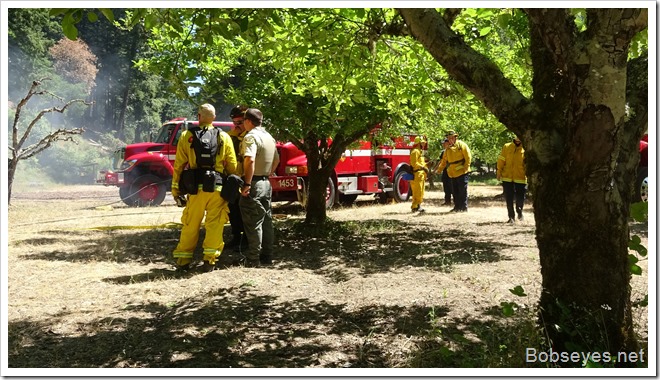 They get on the fire

Here’s the fire guys just starting to get into the fire and have put out most of the flames at this point. 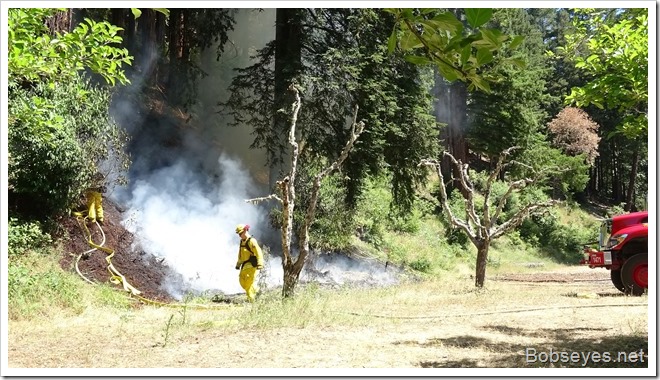 They’ve almost got it out, but the forest mulch is deep so they have to tear it up and spray a lot of water on it to get anything that might be deep and would restart. 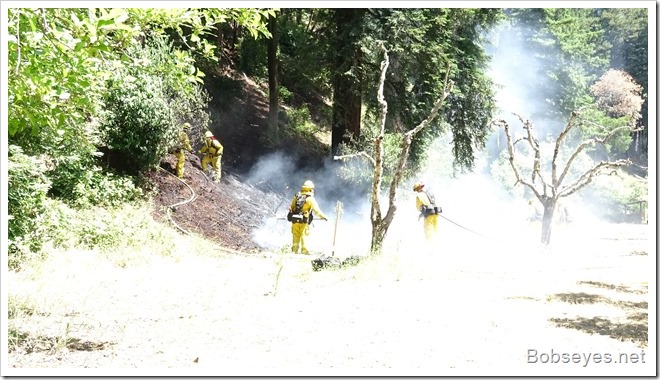 Things are under control

The fire is mostly out and they are doing the clean up trying to make sure all the hot embers are out. 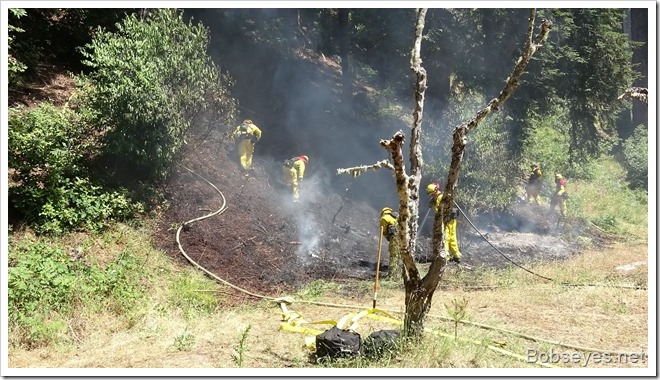 In the mean time the fire inspector guy found  me and I filled out a report of what I knew about the fire. I did complain there was no spell checker. 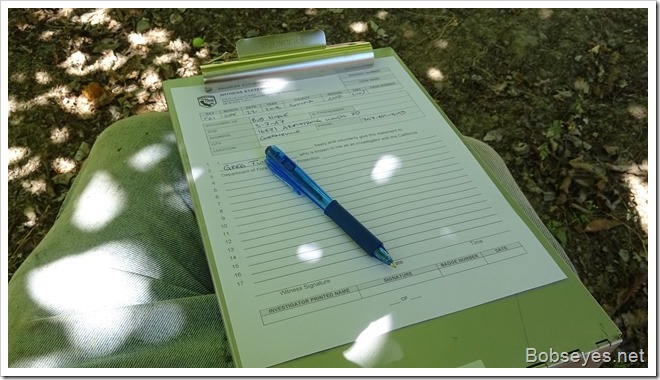 Pretty much out, but they spent another hour or so on it making sure. 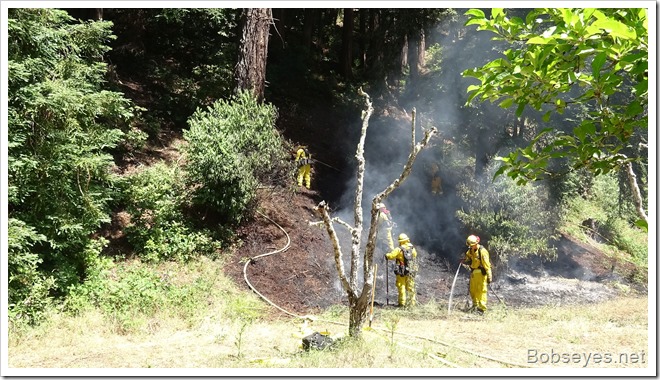 What my neighbor said started the fire

I saw my neighbor and asked him what happened? Kids? No he said he had done a burn pile a couple days before by permit and put it out, but it had started again after a couple days.

Looking good but watch out for the yellow jacket nest

Later I found that there was a yellow jacket nest right where they are spraying. I think the smoke may have saved us from them. The guys covered up the yellow jacket hole so after the fire bees were trying to find there nest, but the fire guys may have jetted their nest with water while putting out the fire. Anyway, without a nest they aren’t real mean. 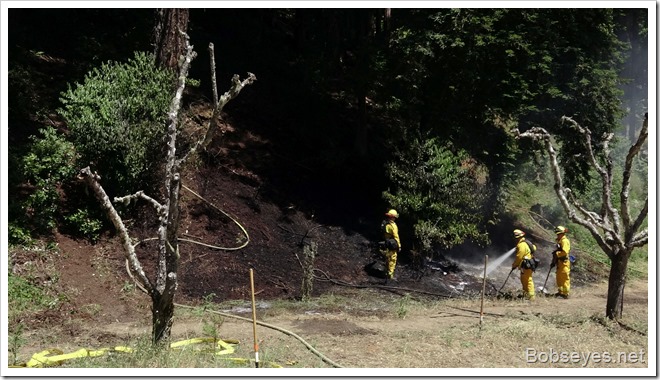 My brother Tom wanted to move his chicks that were mixed in with mine so we got a box and I caught all of his. Sixteen of them were his, one more than they thought I had of their chicks. But I still had 15 of my New Hampshire chicks so all was well. I now have 31 peeps.

Needless to say my adrenaline was really peaking and still is, so I went back home to rest up a bit, then I thought I better go check my automatic gate and see if it was closed to keep the deer out of the yard.
They had to come though my gate to get to the fire as they couldn’t get across the creek from my neighbors place.

Well, my gate was a casualty of the fire. Who ever opened it just pushed it open instead of using the button which I sorta expected might be the case.

The broken gate mount all bent up. 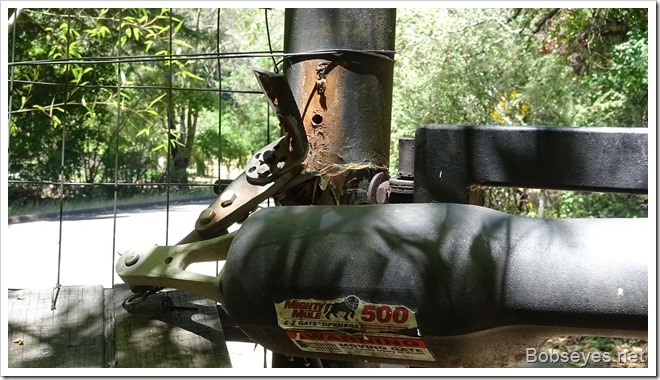 I removed the bent parts and was going to go to the garage and bend them back when I remembered I think I have some new parts somewhere. So I looked in the gate parts box, but lots of gate stuff but not those parts.

Hummm, I remember seeing some more gate parts somewhere, maybe on the junk on the porch.

Sure enough I found two sets of what I needed and they were a bit more heavy duty than the bent parts.

The bent parts and the new parts. 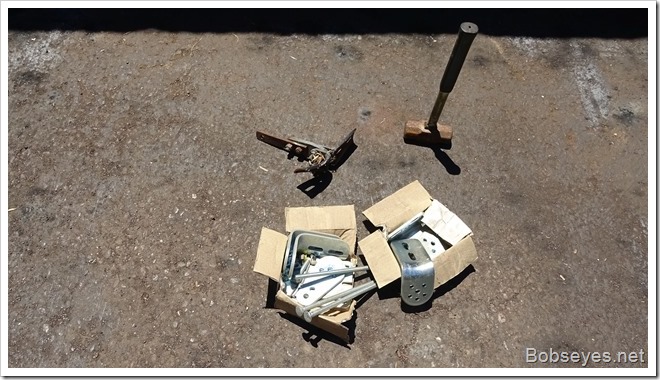 I need to settle down some before I can fix that gate up that’s why I decided to write this blog up. I’m still up so it’s going to take a bit so not much work is going to get done today, but I will try to tackle the gate thing after I do enough chair hopping.

Maybe I’ll get back to the  roost building and maybe not. I still have a half day left, but it’s warm out there so maybe I won’t.

Quite an interesting way to start off one’s day. Good to get it out as fires that start here  in Guerneville have been known to burn all the way to the ocean burning our neighbors to the west out.

That’s my report, back outside for me.