I Have a Revelation While Paddling Down Below Monte Rio

The revelation is about leaky gut

The weather guys said it might rain today, but the clouds seemed a bit high for that so I though I’d take my chances and go kayak Monte Rio today.

Was it going to rain on me

It was nice when I put in so I didn’t put on my rain pants, but my wind breaker is a rain jacket so I had that.

Here’s the river as I put in at Monte Rio today. One guy fishing there below the bridge. 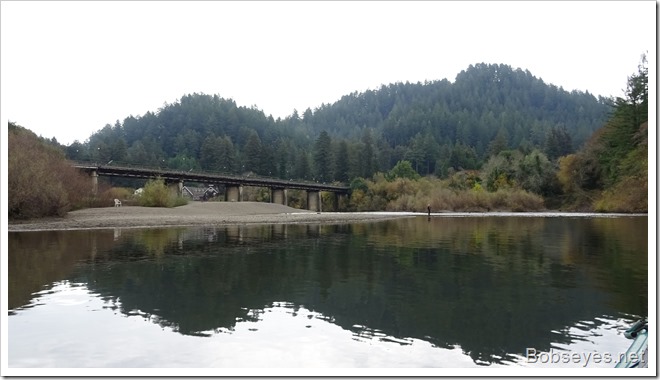 Just after I put the boat in the water I noticed some rain drops hitting the water around me, very light. Maybe I shoulda went back to get my pants, but I didn’t. Instead  I started down stream, figuring if I got soaked I wasn’t too far from the car and I could just go on home to a nice warm fire.

Shot the bull with these guys

I stopped and talked with these fishermen for a bit. They hadn’t caught anything but were enjoying the river. 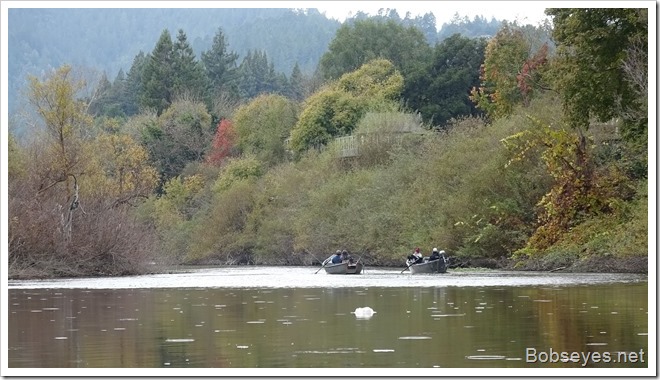 I left them at it and continued on down the river at a slow pace. 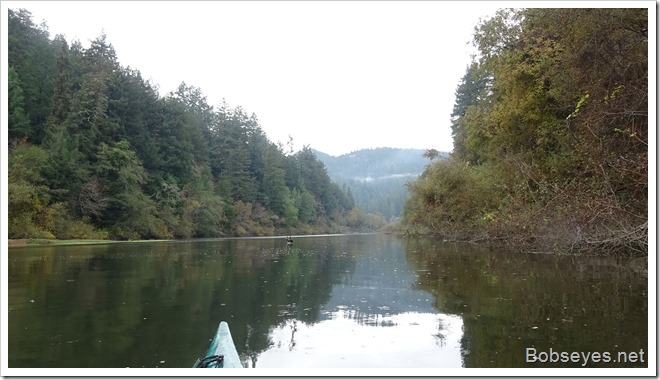 I paddled by these cormorants as I went. 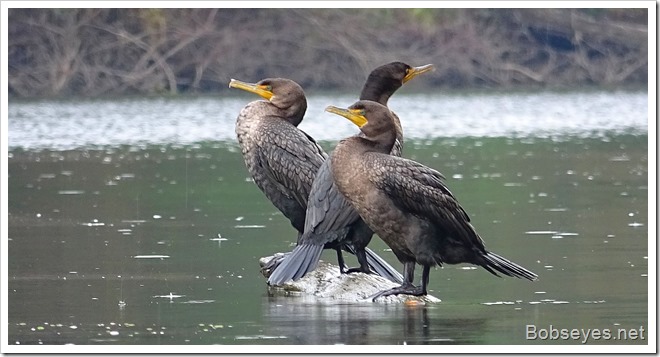 Well those rain drops picked up some so I pulled under these trees to give the shower time to pass. I sat in this spot for about a half hour when I noticed the rain had stopped. 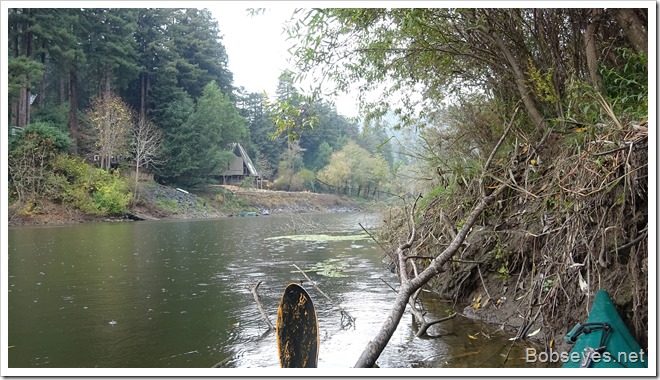 I do a lot of thinking while sitting around the river and while I was sitting in this spot waiting for the rain to pass, I had a revelation.

About four weeks ago, I finally got all the corn out of my system. My crotch itch and bright red rash in that area cleared up. But the rest of my body didn’t clear up and still was turning red and itched some, but not as bad as my crotch did, so what was up with that. I thought it should clear up soon, but it did not, although I think it might be slowly getting better.

The revelation was this. The corn stuff was punching more holes in my gut as time passed and eventually caused the rest of my body to react as the leaky gut was letting more types of food into my blood stream which caused my body to react and get red and itch in other places besides my crotch. In other words the corn was causing one place to itch and other food was causing other parts of my body to itch as I got more holes in my gut.

So I finally get the corn out after about ten years, but I still  have a problem, but a bit different, so what’s up.

The corn stuff caused my gut to get leakier so that is what is causing the body itch now that I have the corn out, and now I have to heal up the leaky gut and the rest of my body should stop itching and the rash should stop if I am right which I think I am as it fits.

Western doctors have little clue about leaky gut, but chiropractors seem to understand it some. So the western docs need to get educated. All they can do right now is treat the symptoms with drugs, but they don’t get to the root of the problem so can’t cure anything leaving the patient with potent drugs that have bad side effects which eventually rear their nasty head and make the patients worse eventually. Not good.

So it seems I’m in a good position to educate some of them as I have an appointment with the head of dermatology at the Veterans hospital soon as he said he has a special interest in  my case. As far as I know there is supposed to be some hot shot docs from the Stanford medical facility there too. They said they were especially interested in my case and wanted to check me out more.

I don’t think they can do anything for me, but I do think I can educate them a bit to help some other people with this kind of problem out. Actually if I am right it’s not just a few people but lots of people that have chronic problems that may be able to benefit from knowing what I know.

As it turns out, I think this leaky gut thing may be the cause of a lot of unexplained chronic problems people in our society are having, so it’s important to get the western docs on board.

Where I learned a lot about this

Here is where I learned a lot about this and suggest you check this out. If you or someone you know has an unexplained chronic disease fixing the leaky gut might be the cure and there are no shots or drugs that need to be taken to cure it. It’s just a matter of what you eat and you are the only one that can cure it, not the docs.

I suggest you watch this video on You Tube. I’ve learned a lot from Doctor Bergman and others. You tube serves up more videos of things they think you are interested from what you watch, in the right column so click on some of them and learn more. Dr. Bergman has hundreds of videos out and he tries to put things out there so anyone can understand them.

Just across the river from that spot was this house that had all the river banks washed out last winter and they’d been repairing it to get ready for this winter. 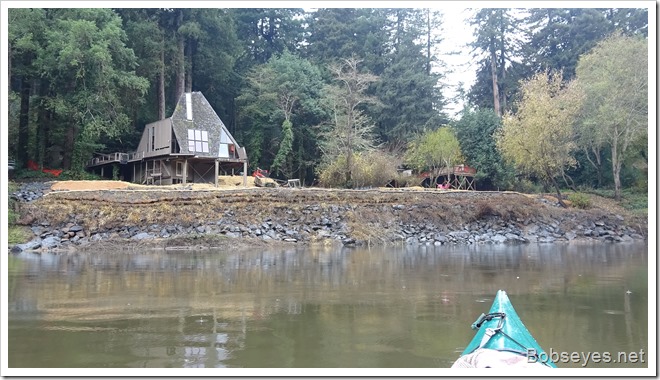 I noticed that all the repairs were  using burlap or jute and no plastic which I was glad to see. 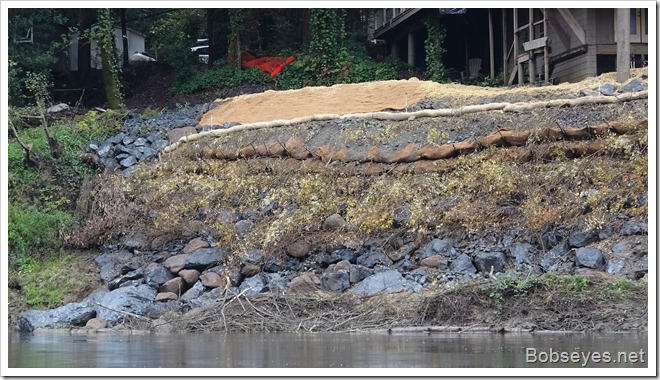 About ten years ago, I started to bitch at any state or biologist about all the plastic netting the state was requiring on water shed jobs was going to pollute the river as they put thousands of what they call waddles out each year and they don’t degrade very fast so they just build up in our water systems. The waddles are the long tube things and you will notice that this one is all jute or burlap with no plastic which should decay were the plastic stuff didn’t and this stuff shouldn’t be a trap for wild life like the plastic netting was. 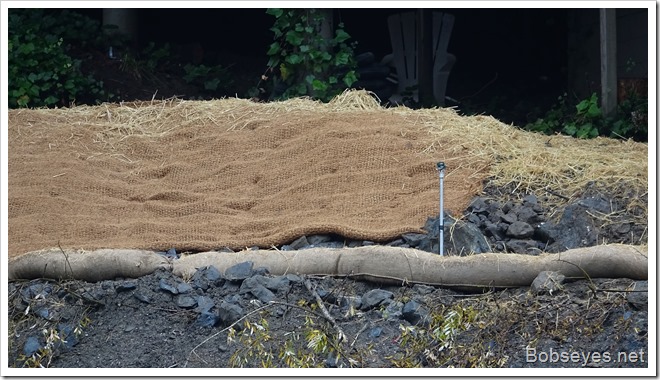 Nice to know they listened to what I had to say. Now if all the other states would just follow suit along with the rest of California too.

With the rain showers stopped I continued on my way down the river.

I paddled by this egret. 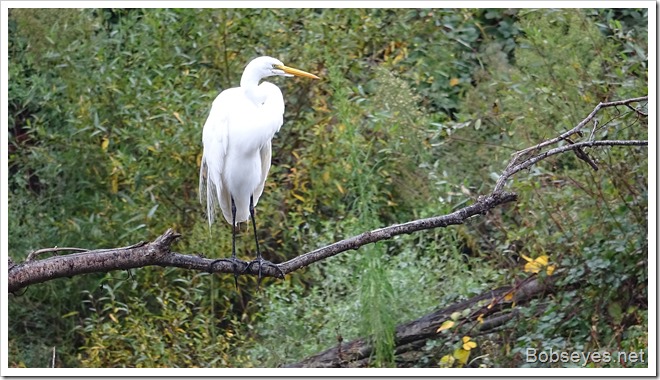 I was headed to the spot up ahead called Villa Grande hole where I was planning to set for a bit before heading back up the river. 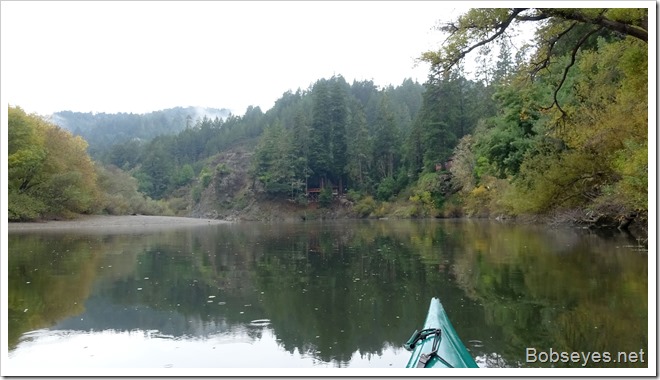 Here I am sitting in the Villa Grande hole looking down river. 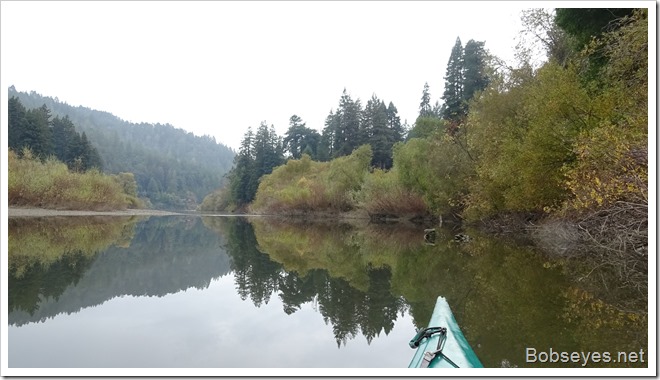 I  hung at the Villa Grande Hole for about an hour then started back up the river which  looked like this. 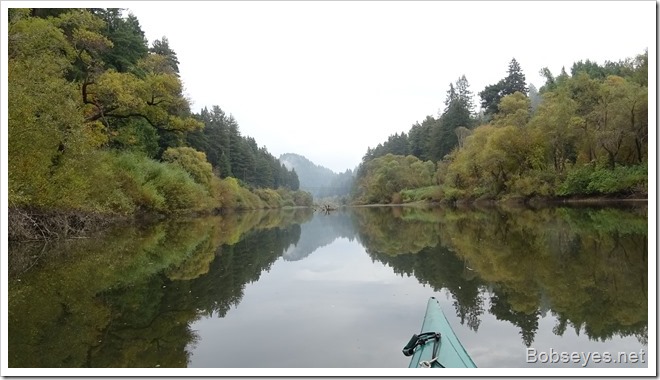 I made it back to Monte Rio without getting rained on. I see Bill at the ramp fishing so I talked with him for a bit. Not much action in the fishing department today. 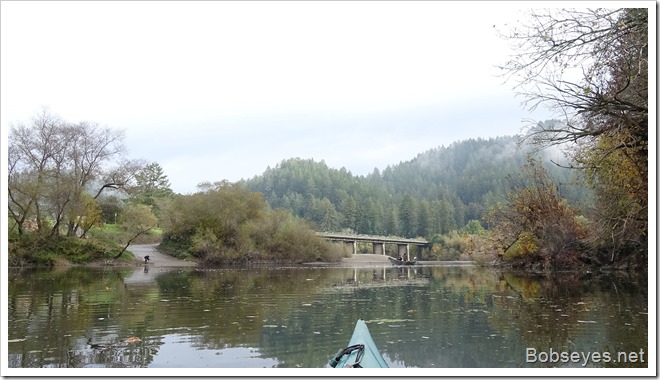 So I loaded my boat on the car and went on home for the day. I needed a nap so that’s what I did. After that, it was almost dark so that was my day for a nice one.