Getting a paddle in while I can

With more rain predicted to come in tonight and last for a few days or so, I headed on down to Jenner to get in a yak while I could.

It was a bit overcast and cool, but at least the wind was down. I dressed warm and put my rain pants on to help keep warm mostly and just in case there were some rain showers.

No one else on the river

I put the boat in the water and as far as I know, no one else put their boats in the water today which is just fine with me.

I paddled across to Penny Island and decided to head on up the river a ways, maybe to the highway one bridge.

I went by this great white egret on the upper end of Penny Island. It was fishing along the shore catching some small fish and doing rather well at it. 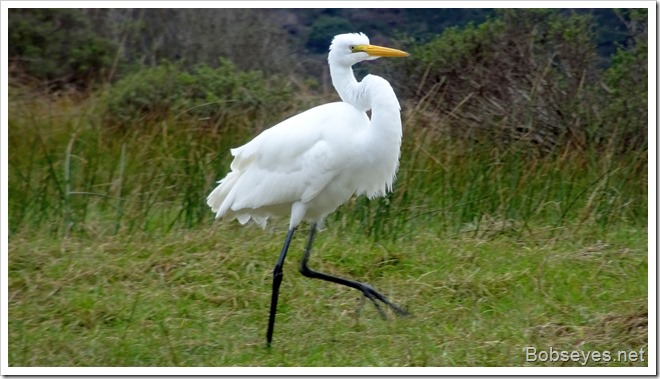 I stopped here at Eagle’s Landing and sat for a bit. 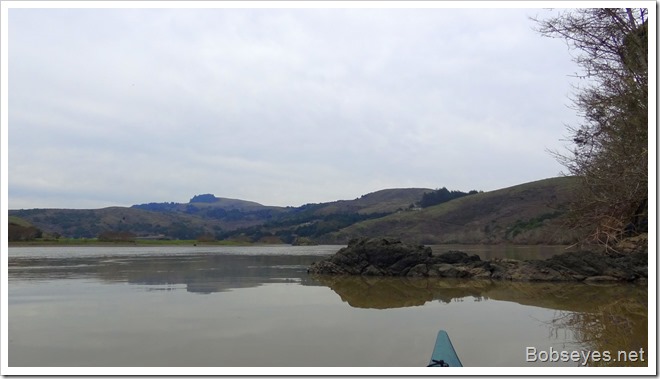 This seal joined me for a nap. 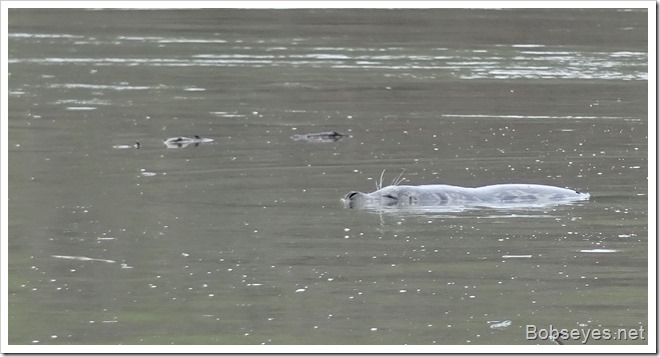 After a bit, I continued on up the river going past these mallard ducks which were just sitting around taking it easy. 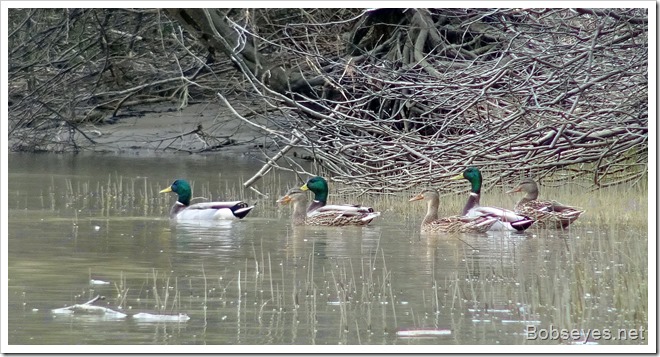 Hadn’t seen these big clams before

Just above the ducks, I spotted two of these big clam shells, about four inches long. I hadn’t seen any of this type that large before and didn’t know they got that big in the river.

Something has eaten them and discarded the shells, most likely muskrats as they are known to eat clams without breaking the shells during the process. I’ve also seen where the muskrats have dug up smaller ones just below this spot. Most other critters just break them open to get to the clam. These shells are fairly soft, so it’s surprising they get them open without breaking them up. 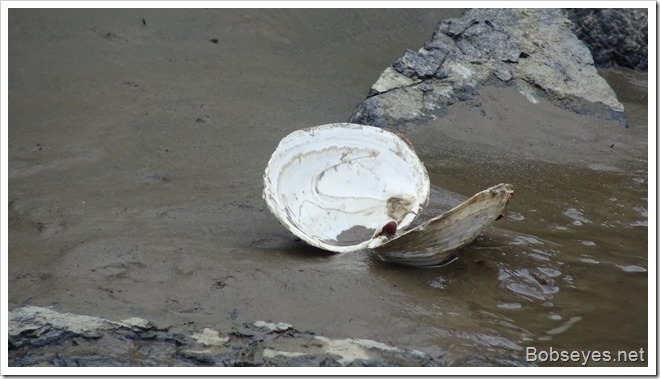 Made it up to Willow Creek

I paddled on up to the highway one bridge which was as far as I was going today, but once there after a short break I decided to continue up the river a ways further and before I knew it I was at Willow Creek, so I paddled on in.

Near the end of the open water where I could paddle I saw something up ahead so I approached and found these river otters feeding in the creek. 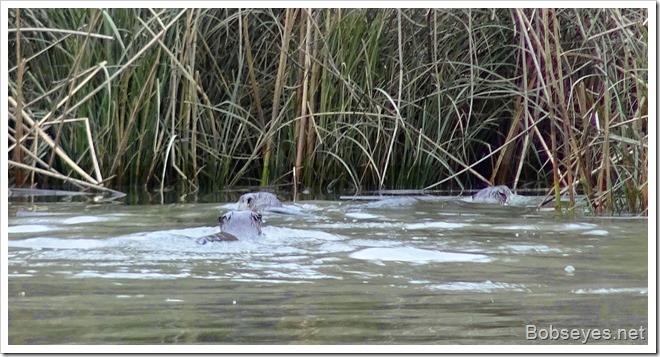 The otters moved into the grasses. I sat for a bit to see if they would come back out but they didn’t so I headed back out the creek which looked like this. 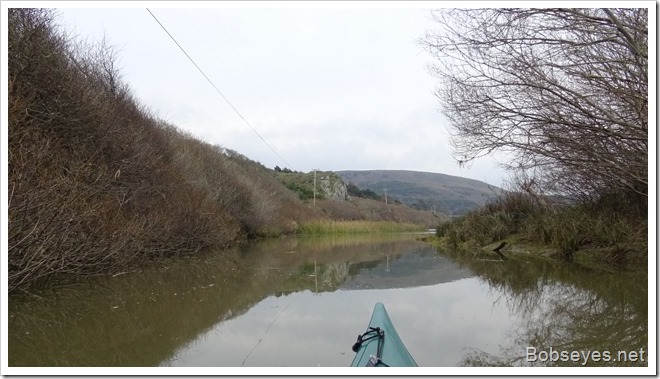 Once back out on the river, I crossed on over to the north bank and paddled down along it looking for critters.

I went by these geese. 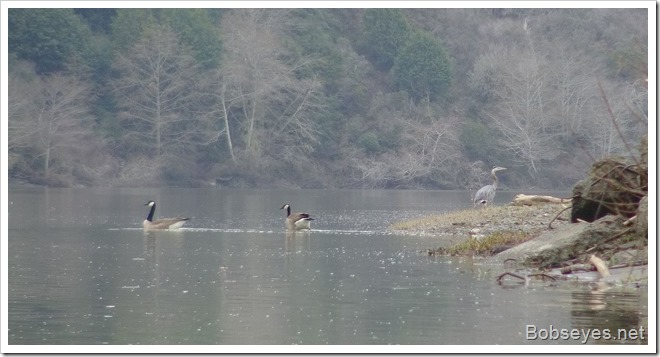 By Paddy’s rock there were some harbor seals doing what looked like hunting big fish that come up the river to spawn. They stopped to check me out. 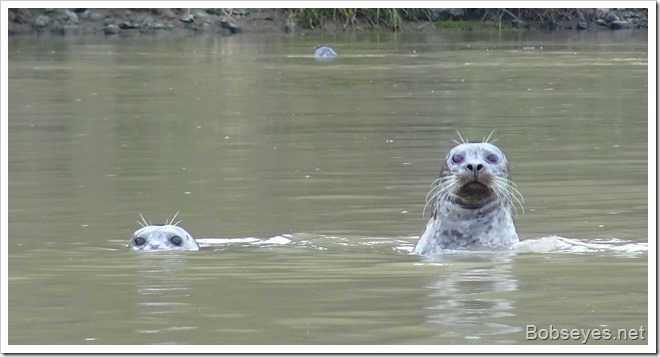 About that time I noticed little rain drops hitting the water, but they were so light they didn’t get me wet, but I was thinking they might get heavier soon, so I continued on down the river towards the boat ramp going by these golden eye ducks. 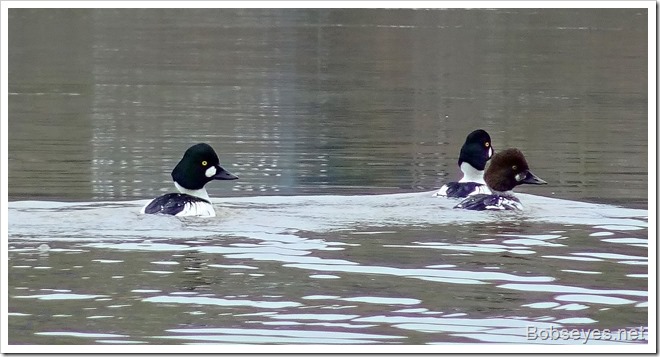 And another river otter

Just past the ducks, I saw something moving in the water that looked like it might be another otter so I waited and watched and sure enough this otter popped up. It was fishing away headed up stream as it did. 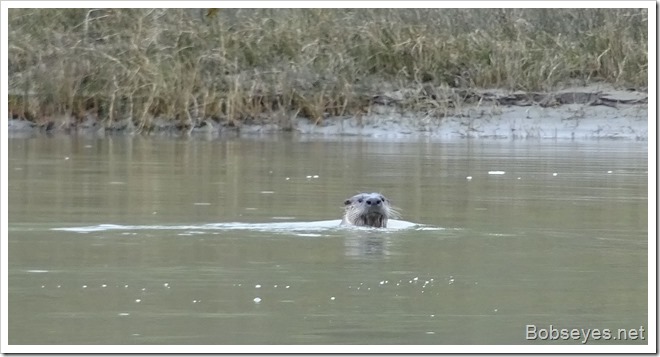 River otters or what

I was almost to the boat ramp when I saw some sort of activity across the river by some reeds which I thought were likely more otters, so I veered on over that way.

They weren’t otters as their wake was just too big. 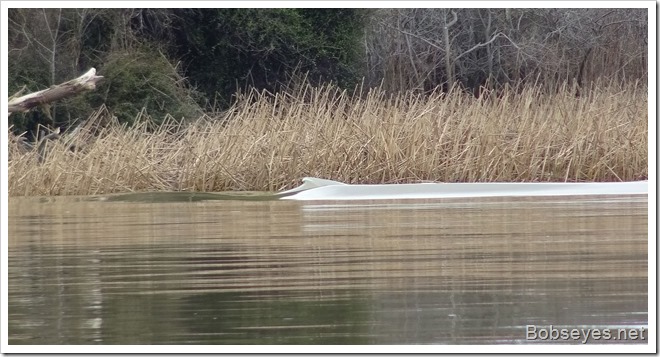 Nope, a pack of hunting seals

It turned out to be a pack of harbor seals hunting away. That’s not rain in the pic, but one of them came up too close behind me and spooked making a big splash. Good thing I had my rain gear on. 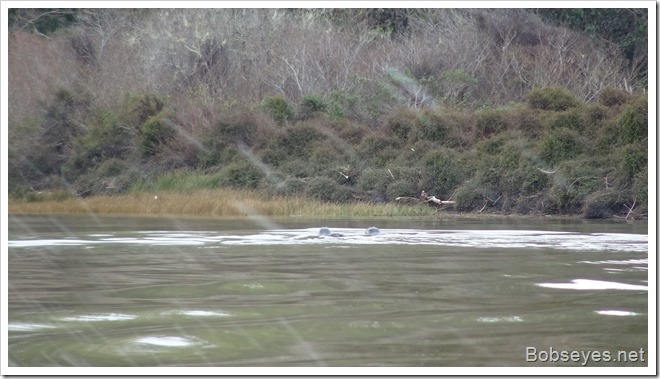 With all the harbor seals out hunting today it indicates big spawning fish are coming up the river most of them likely being steelhead.

The sprinkles had stopped, but I headed on in to the boat ramp anyway and went on home.

After a rest at home I was getting a hankering for some fresh carrots like the ones I got out of my brother’s garden the other day. There aren’t many left, but I knew if I took a shovel with me I could likely find a few of them if I dug around a bit.

My bother has been having a serious problem with voles eating them. Voles are little mouse like animals that become big pests as they multiply fast in the summer and like carrots real well. I dug around and did better than I thought I would.

This time of year any carrots are real sweat and crunchy.

Here’s the bounty for my troubles. 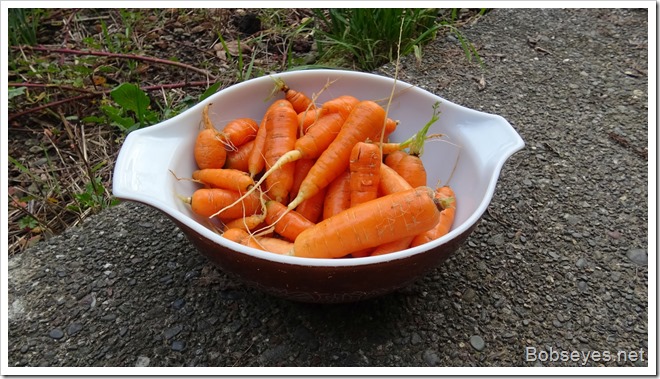 That pretty much finished off the day for another nice one.