Yesterday I paid a visit to Adel who is building a home in Rainbow Acres. We shot the bull for a bit and I transferred some pictures I took of her leaky skylights the other day. 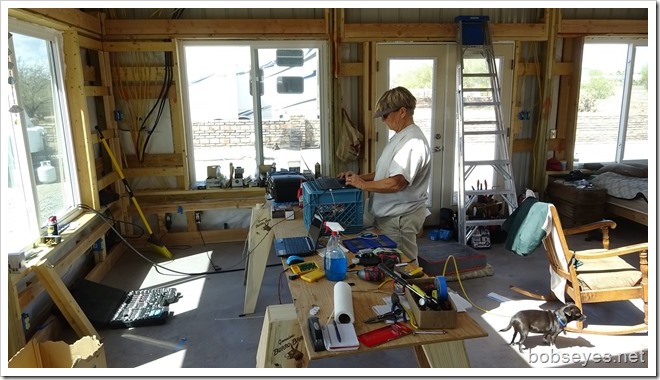 Headed out for the Kofa

In the evening around six I headed out towards the Kofa NWR headed back to Queen Canyon where I was a week or so ago.

Here I’m entering the Kofa. I’m headed just to the left of the big mountain where the shadow in the picture points too. I hope to hike the trail to the top among other things. 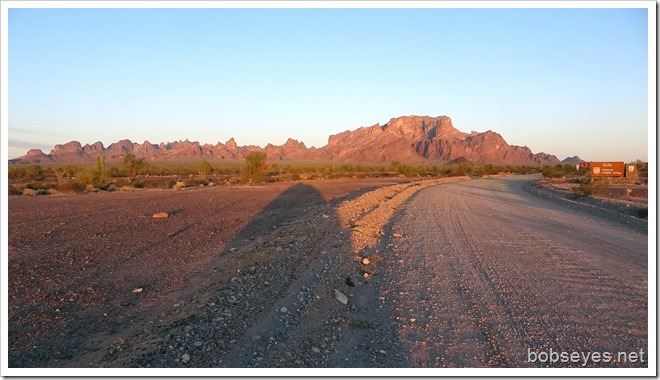 Check out this map

I took the road to the queen canyon. It got dark on me before I was able to get to my camp area which I’ve marked on this map. Also note the Cereus tank which I hiked to today from my camp spot. Also note Tunnel mine spring which I looked for but didn’t find. 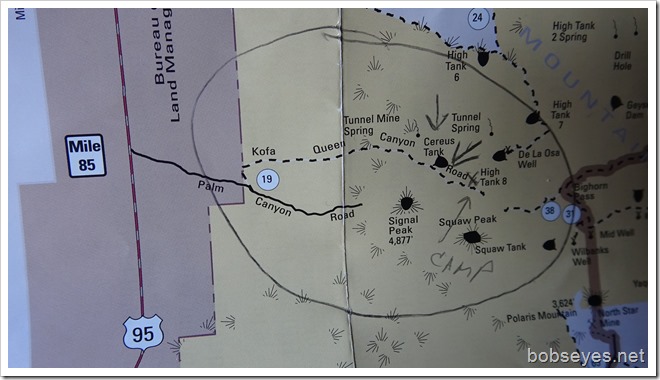 I made it to my camp spot just after dark and having been here a bit ago I knew where to park in the dark, which was where I parked last time. Up on the side of the wash which is just barely out of the wash as the wash could flow if it rained enough, so I tried to park as high as I could.

I camped and had a good night.

The next day, today Hiking to Cereus Tank

Today I sleep in and got it going around noon. My plan was to walk back down the main road and try to find the Cereus tank. It is shown on the map, but it is pretty vague just exactly were it was.

I started back down the main road I came in on as it appeared the Cereus tank was back down the road a mile or so. Remember I’m looking for a well used game trail that takes off to the right and  I have no idea where it might be. 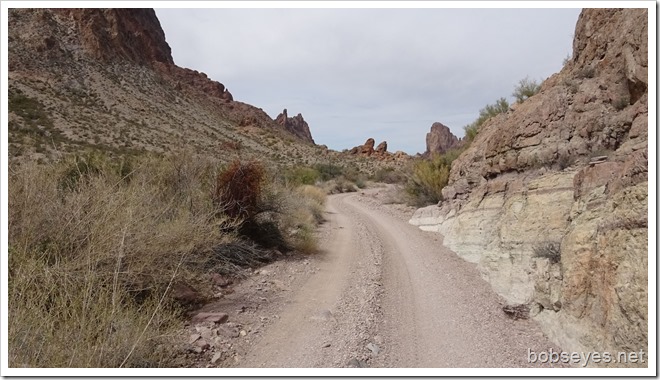 When I found any game trails going off to the right I followed them a ways to see if they might go to the tank. I had several false leads.

I checked out this area. 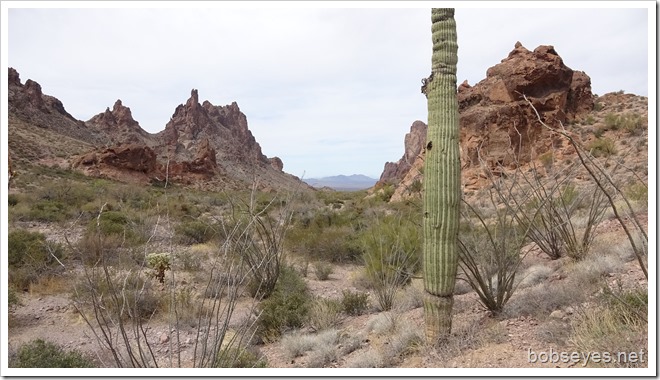 And walked along here. 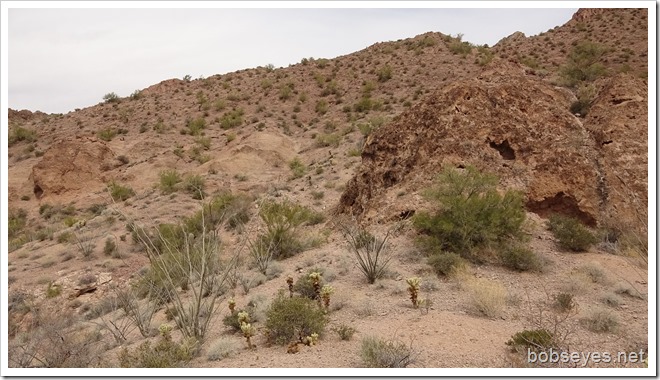 And walked along here looking for a trail to the tank. 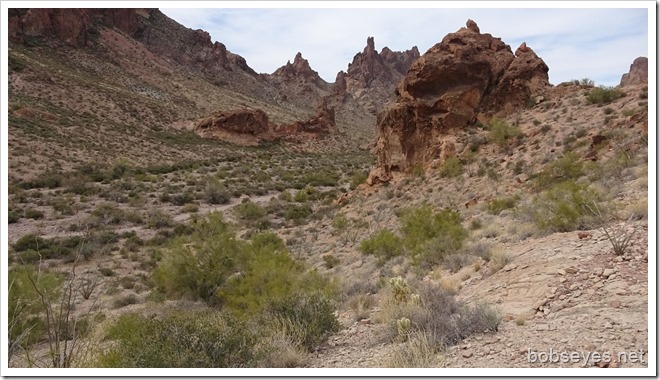 I spotted this bird nest in the cactus. Not much is gong to get into that nest unless it’s a bird. 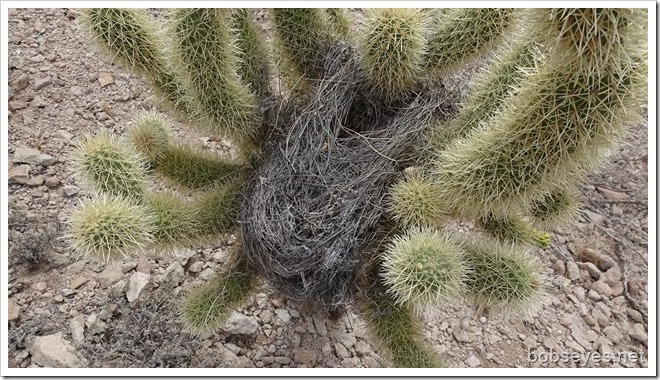 Picked up a game trail past the skull

After a bit of hiking I made it down to the skull cave. I continued on by it and picked up a good game trail going up the wash just around the corner from the skull cave which I followed. 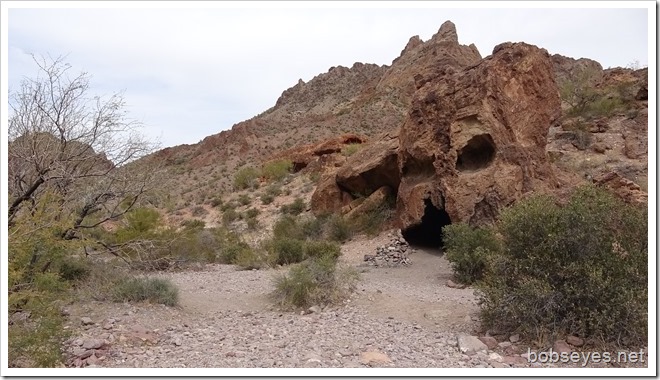 Now this was a well used game trail for the desert so I followed it up the raven not really knowing if there might be a tank up there or not. No way to tell except to hike on up there. 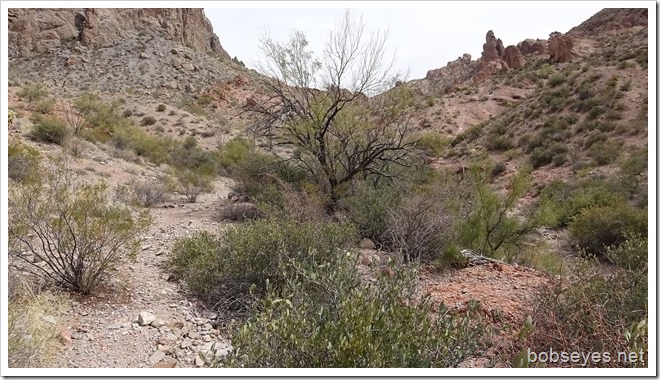 I walked through here on the trail more or less. 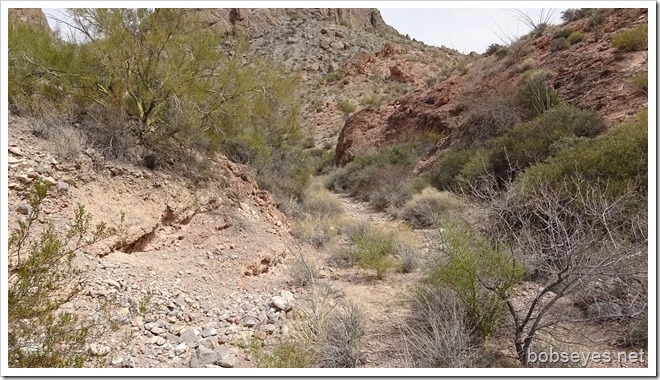 It appeared like I was going to  hike up this canyon so I continued on up as the game trail started to peter out. 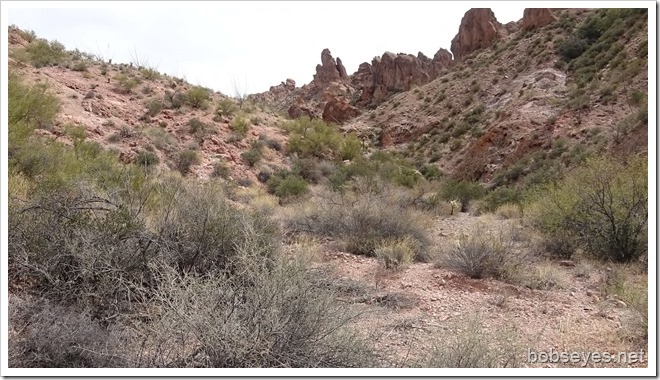 This I saw this which I knew to be a dam for a tank which I could see on the lower right. 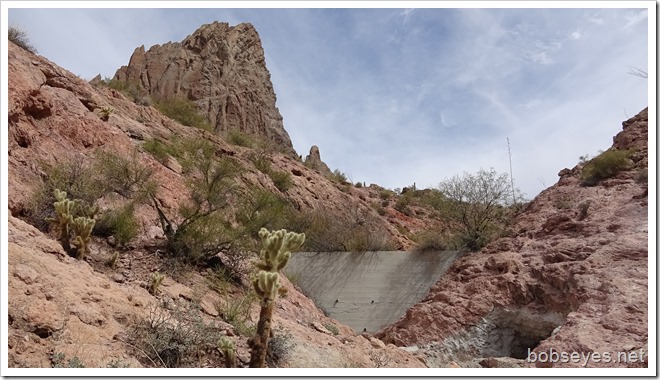 It was a tank alright, but I didn’t know which one. The water may not look too good, but if you are thirsty, I bet it’s delicious. 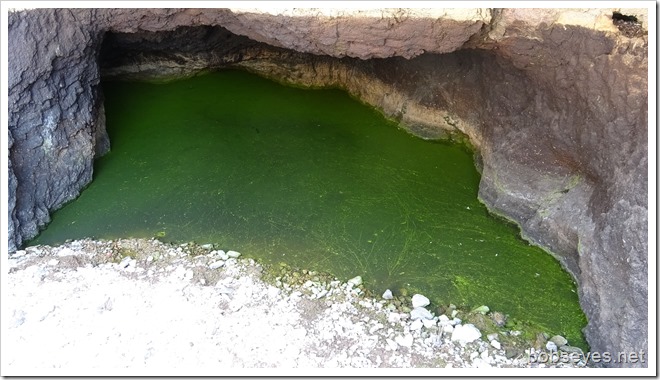 I found these in the rock there, so it’s the Cereus tank. 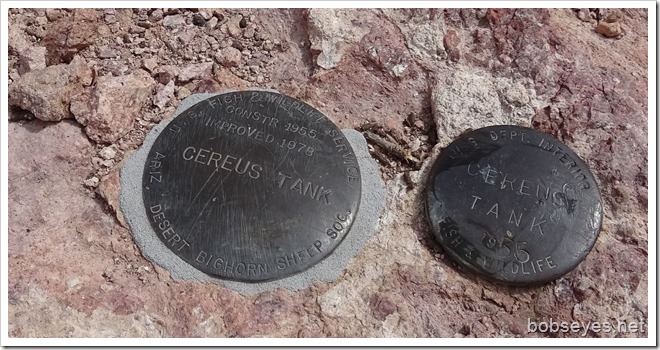 I looked around a bit and spotted this blind up on the hill. 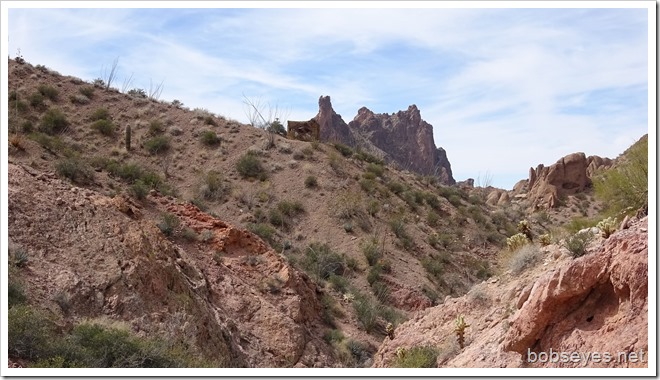 Here’s the blind. Hunters are allowed to hunt the tanks but I think the blinds are used mostly by wildlife studiers. 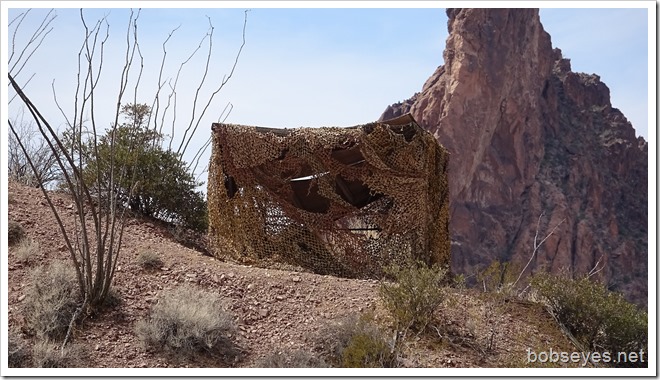 Chatted up a storm

After a bit  I left the tank and went back to the skull cave where I found these two people resting there, a lady and her brother. They were hikers so we talked for a good long while shooting the bull. 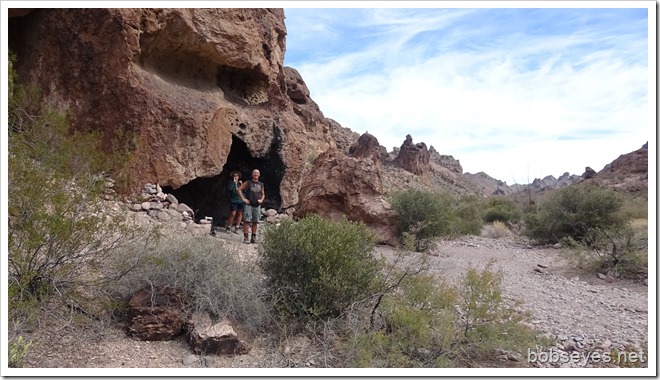 Couldn’t find the Mine Tunnel Spring

But I did find this

On the way just before I passed by the skull cave I spotted this little guy, about three inches across, very small. 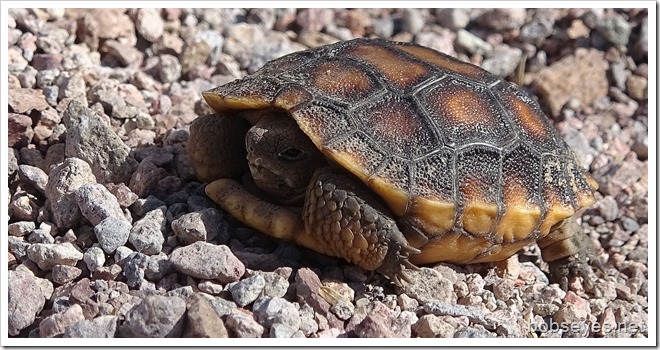 I left it and made my way back to the van about 4 where I was very tired so had a nap before getting something to eat.

That was my day for a good hike.

Today I’d planned to  hike up the trail to the top of the hills here. But when I went outside to get started a cold gusty wind was blowing so I decided not to go up the trail as it would be cold. 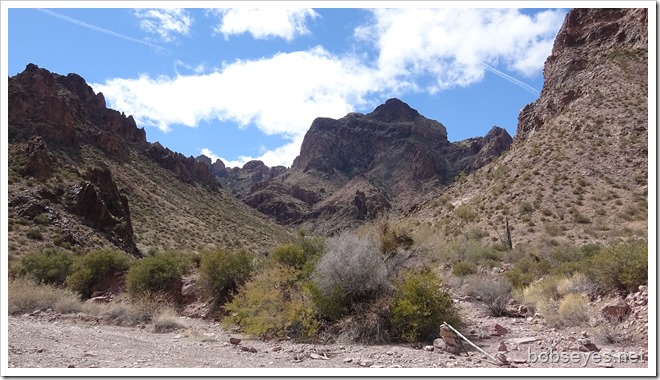 Looking for Mine Tunnel Spring

After sitting around a bit I decided I might as well go look for the other water hole here called Mine tunnel spring. As far as I could tell it was close to the Cereus tank so today was mostly a repeat of yesterday as I went in the same area.

I climber over the hill here. 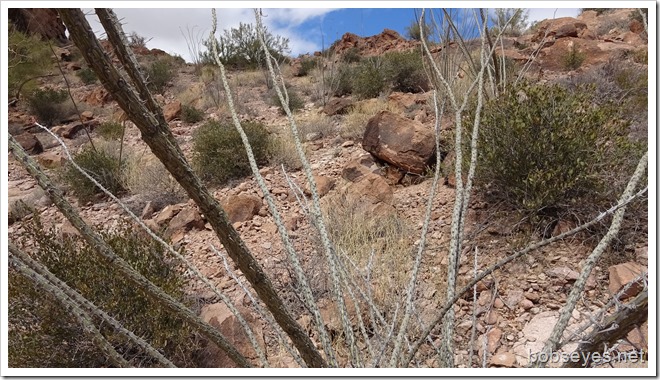 And looked around this area for the spring, but I didn’t find it. 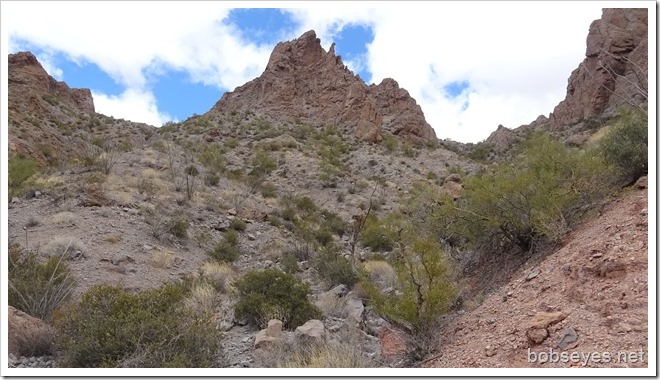 I did notice this cave near the Cereus tank that looked like it might have been used a long time ago, but I failed to check it out as I got side tracked. 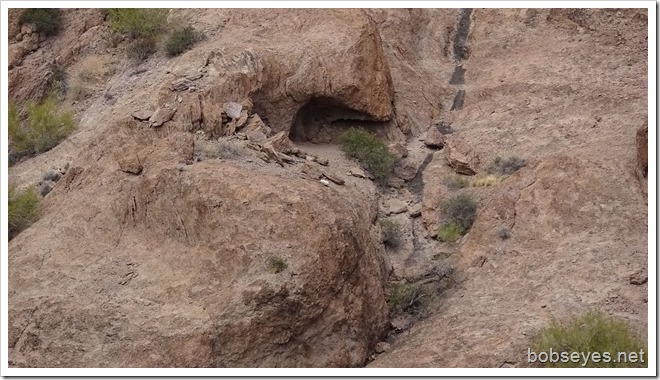 This was the only critter I saw today. 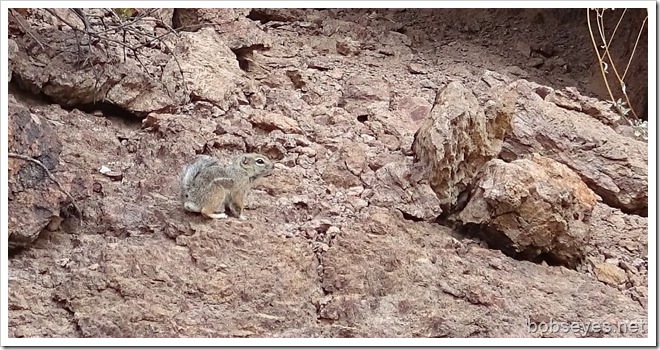 I was back at the van by 3 and was beat so that was my day.