Three posts today starting with Second Failed Try to Find the Ridge Top Trail. You can find them all on the Recent Posts in the right side column.

To the top on the Signal Peak Trail

I’ve failed to get to the top twice now, but today I felt there was a good chance I’d make it.

Once I got it going I got my stuff together and headed out. I took  my camera, a flashlight and a walking stick. I felt I’d not need water as I tank up good most of the time.

I was off on the trail just after 11. I made it to this part before my first break. The trail goes somewhere to the right of center. 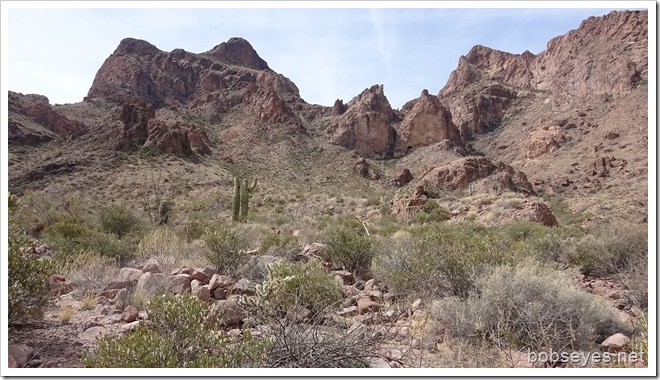 I’m on a part of the trail I’d  been on a couple days ago through here. 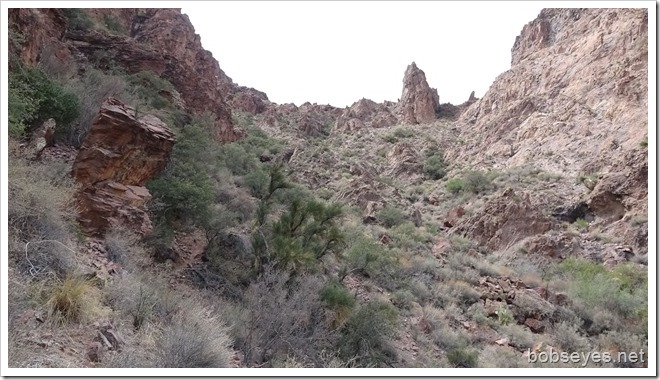 I found the way through this part the last time I was here a couple days ago, but didn’t have the energy to go up it then.

The trail goes right up the rock by my walking stick. 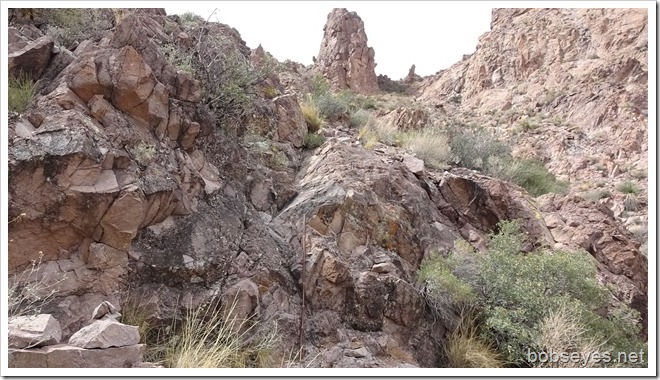 Later coming down I found a better way through which I thought was likely the old way. If I’d continued all the way up into the little ravine and gone into the brush, it would have been easier. I think the brush just needs trimming. Lucky there were no thorns in those bushes as I went that way coming down.

I continued on up through here not knowing where the trail would go. I watched closely for the little piles of rock that marked the trail. Where they were is where I went. 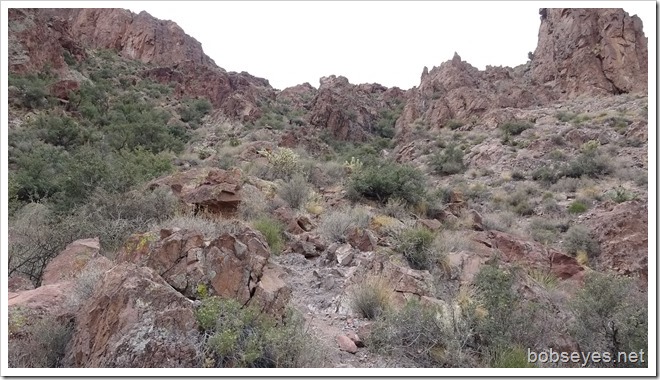 Eventually I made it to a ridge top, but the trail kept on going so I did too. Although I was having to push on a bit as I had to fight the feeling of just turning back every once in awhile.

This was the first ridge top I hit. 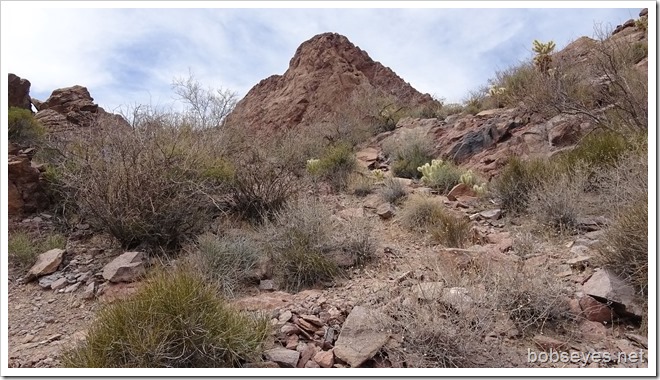 From that ridge top, the trail continued on up to one of the peaks. I had to think about it and I kept going. The wind was picking up. It was cool and not hot. The temperature was good for hiking. 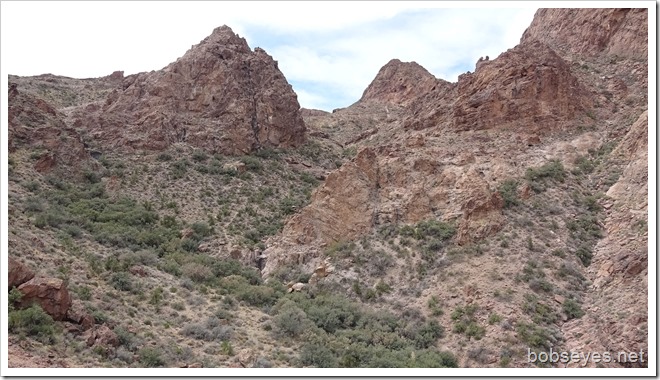 There’s the trail, bottom left and it seems to be going to the canyon right of center. 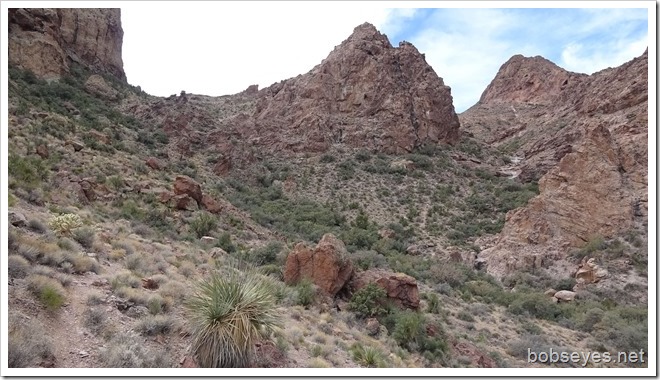 I’m on the trail gong though these rocks not too far from the top. 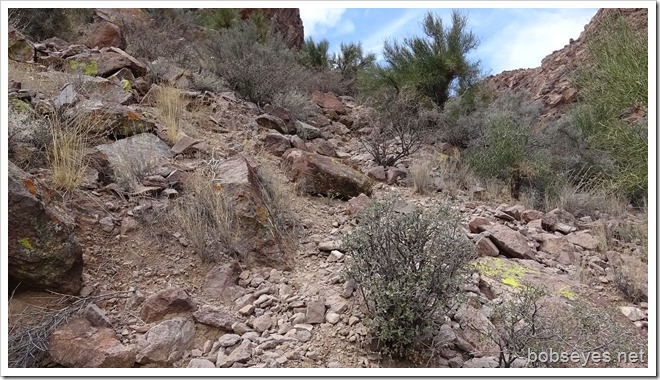 but I still l have a ways to go right up this rock wash. I think I might be heading for that peak up there to the right. 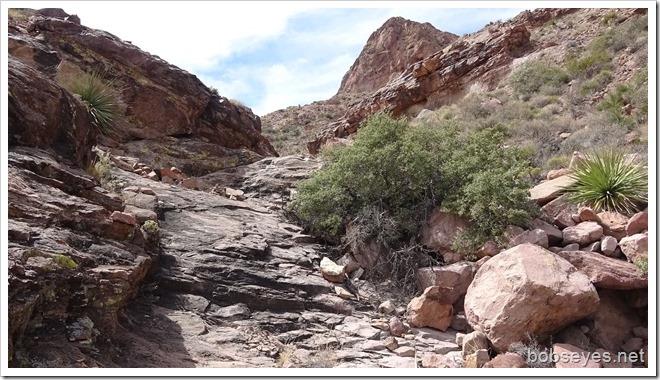 When I saw these piles of rocks on the trail, it made it sorta royal and I figured I wasn’t too far from the top, but it was a ways yet. 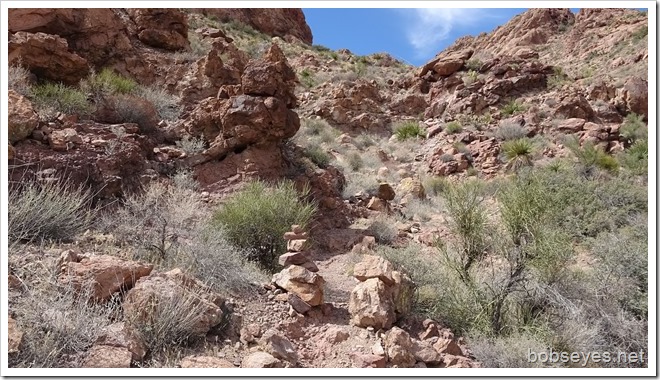 I had to search around a bit to find the trail through here and on up. The trail went right on up  pretty much though  center. 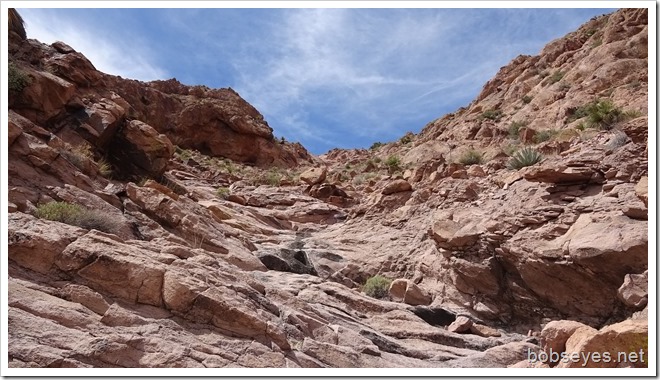 While I was looking for where the trail went I ran into this big cave. I could see some modern camping stuff in it. I think it is too high up for anyone to have ever lived in it for more than a short time as there’s not much water around. 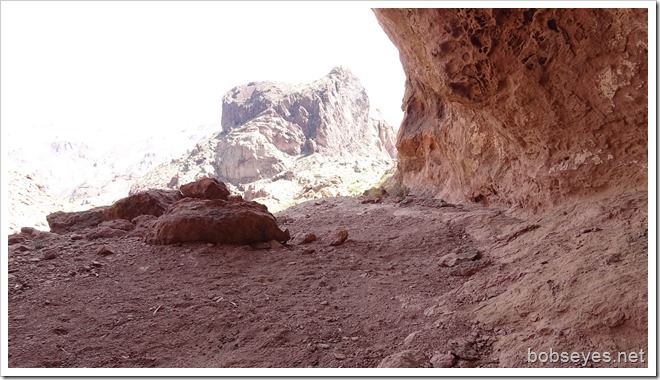 I thought this might be the  top, but it wasn’t although it was a ridge top and near the top. 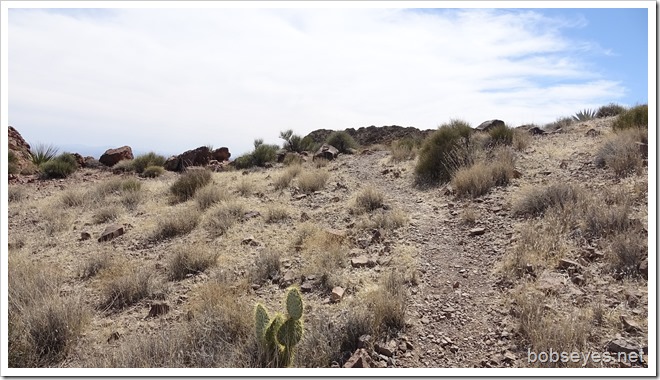 This was my view as I looked over the ridge top. Palm canyon is down there somewhere right below. 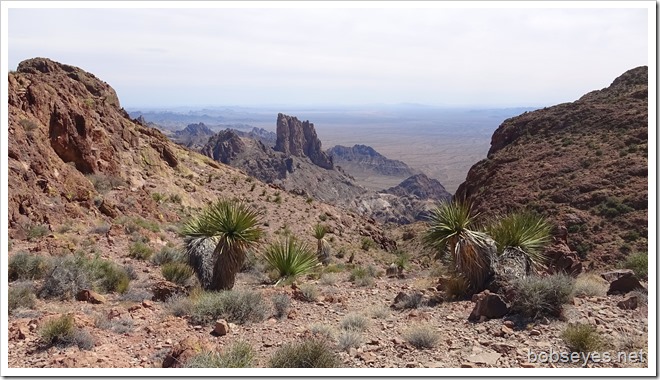 The winds are strong and gusty and I’m not feeling comfortable up here, partly as I no longer like heights much in my older age.

But I see this trail that looks like it goes to the top and I think no I won’t but then I give a bit more thought and I do it because I’m here. 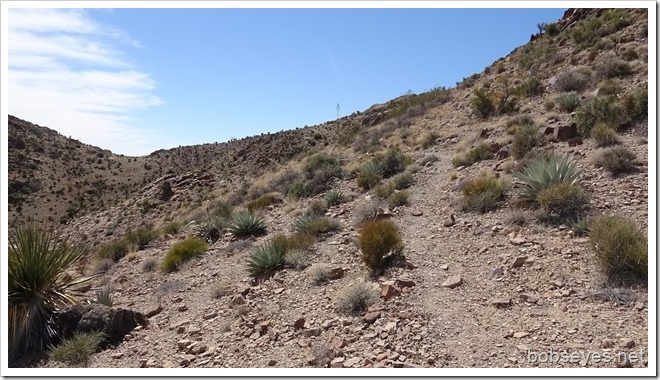 But that trail just goes to another part of the ridge top. Note someone once had a campfire there, maybe back packers? 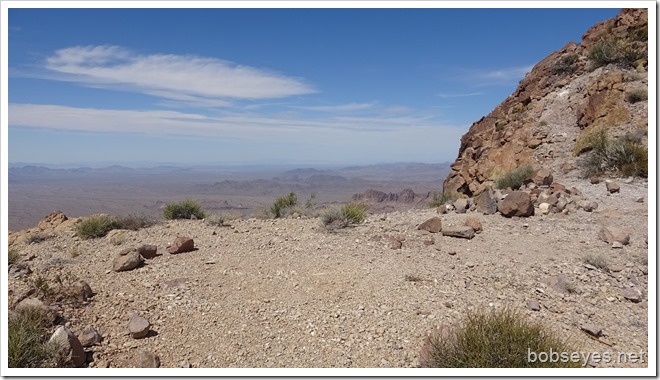 There was another trail still going up so I gave it the same thought I gave the last one. Remember I’m not feeling like I like it up here, but I push on with the wind gusting pretty good. 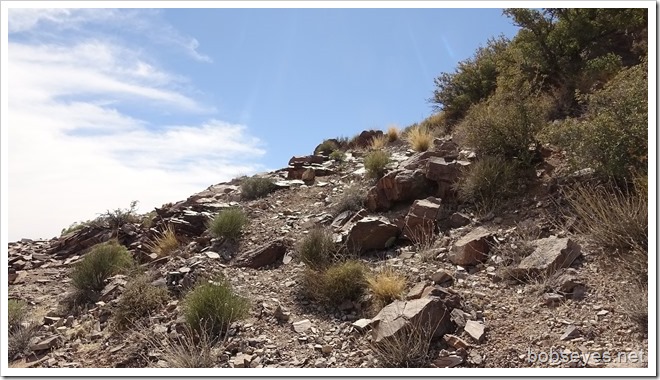 But before I do I take a picture from this point. 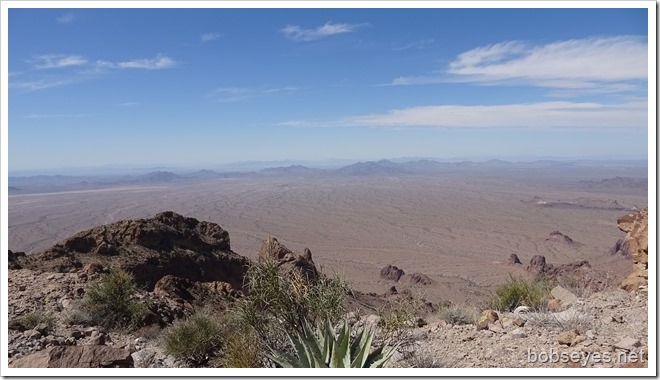 I follow the trail to the top of the peak. I’m not sure which peak, maybe Signal Peak?

This is the top of the peak as I approach it. I take some photos and don’t stay long. The wind is really blowing. 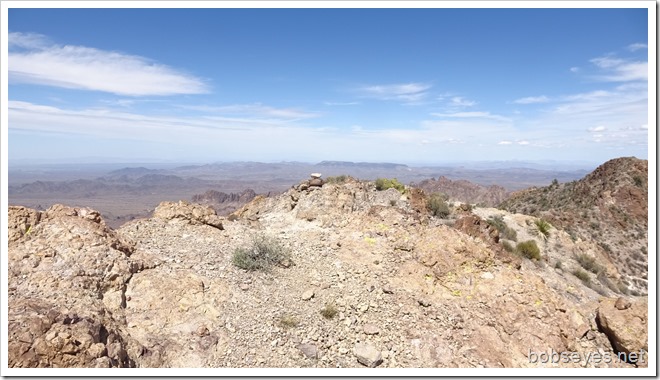 A photo from the peak top looking sorta west toward the Palm Canyon area. 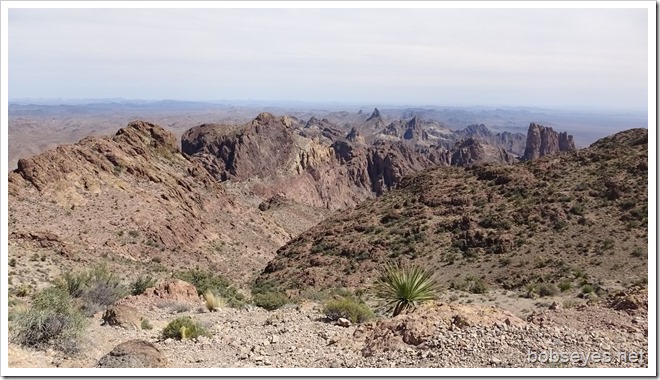 I didn’t stay at the top long as I was uneasy and I still had a lot of trail to do to get back down. I left at 11 and it was  now 2. I’d taken three hours to get to the top. It should take less to get back to the van if I didn’t screw up and loose the trail. I was also out of sight of the canyon where the van was parked and that also didn’t give me any good feelings.

So off I went headed back down the trail keeping a close watch out for the piles of rock. I did get off the trail once but looked around for the rock piles and finally spotted one.

This was my first real good feeling spot. The trail goes right by the sharp rocks and over the other side to where I could see the canyon my van was parked in. I think that is about the halfway point. I’d say the total trail to the top is about two miles or so. 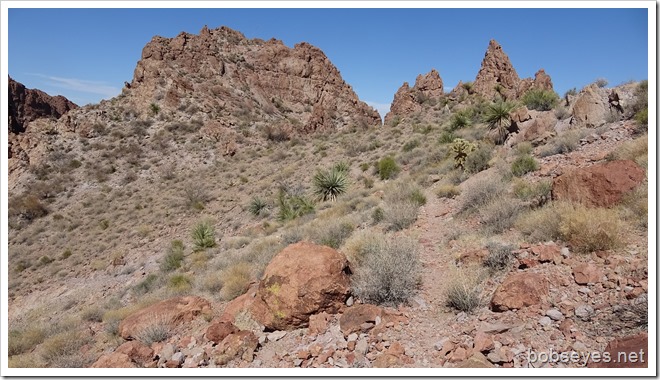 I did a short break on the ridge top, then continued on down the trail feeling better about getting back to the van which is down at the bottom of this left center,not far. I did a break here by a big rock. 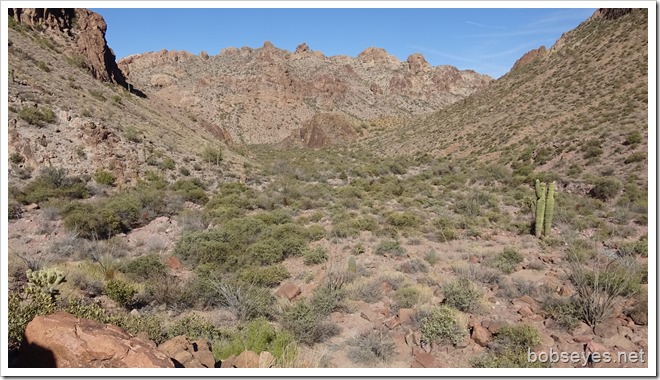 I made it back to camp totally beat. Three hours up and two hours back. Now I know what’s up there. :O)

At this moment a hiker walks by my van and I stick my head out and say hi. Turns out he’s been up the trail before and he tells me it’s Signal Peak so now I know.

My legs and feet are saying they’ve had enough so I’ll take the rest of the day off.

Tomorrow I plan to move on down to the the Palm Canyon parking lot which I’ll do in the afternoon after most of the tourists leave. The plan is to check out what I see on the map that is called Old Palm Canyon.

So anyway I finally made it to the top of the Signal Peak Trail. Of course I’m glad I did it, but in truth, I need to access whether a person my age of 71 should be doing such things or not?

Had a nice invigorating day.