It’s always nicer when the wind is down

I met Ray at the boat ramp at Jenner this morning for a day of kayaking the estuary.

The sun was out and the wind was down as we headed down along Penny Island’s edge towards the river’s mouth at the ocean. 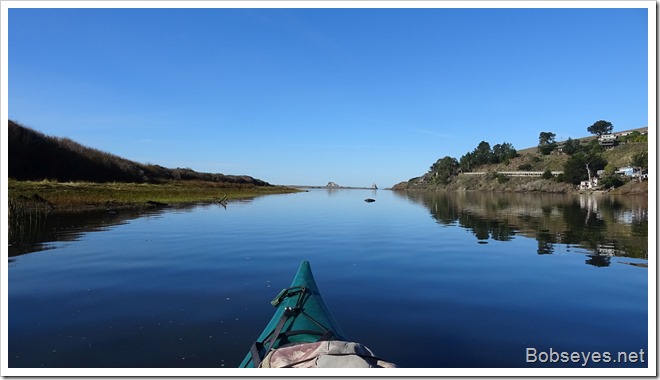 Ray spotted this hawk up ahead. I couldn’t tell what kind it was. It looks like it might be molting. 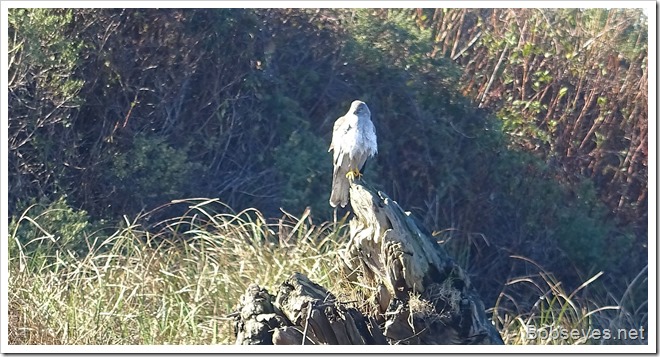 Just past the hawk we paddled on by three turkey vultures. Here’s two of them. The other one is down in the grass likely eating something dead as that’s what they do. 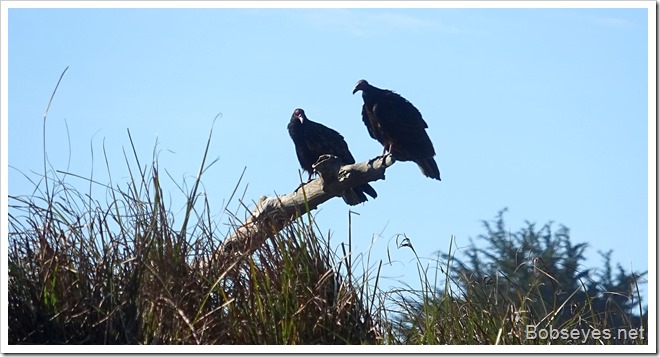 We paddled off the lower end of Penny Island and crossed over towards the river’s mouth. There were a bunch of seagulls resting in the water that took off as we approached. 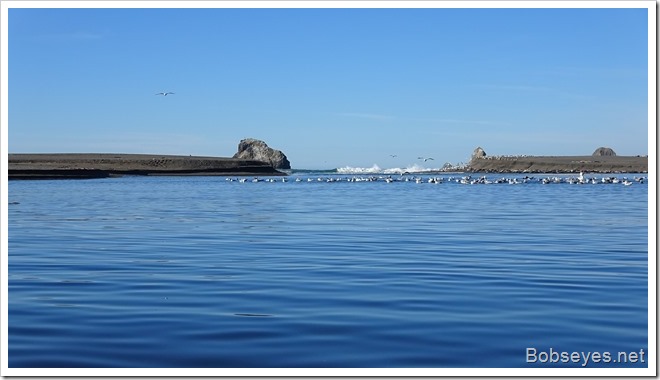 The ocean was fairly rough with big waves splashing up on the jetty. 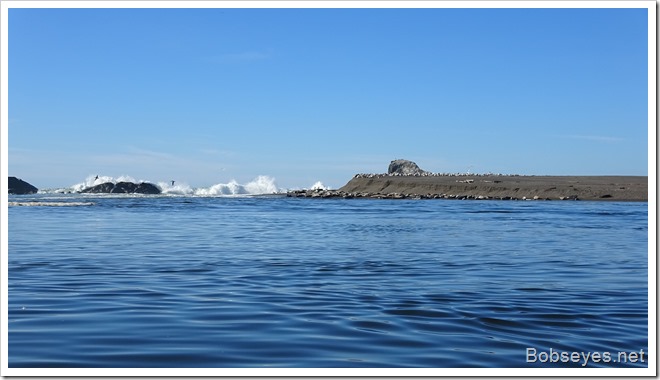 Lots of birds and seals resting in the area as the waves crashed in.

We sat in the mouth for a bit then paddled on down to the end of the river here and sat for a bit just looking around and enjoying the day.

Here’s the view looking back up the river from the end of the river. 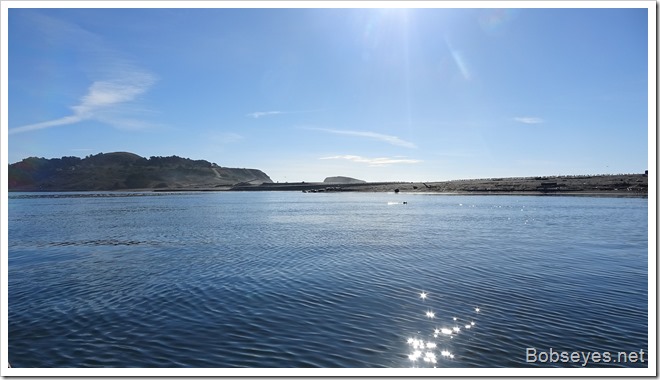 Slow pace up the river

Eventually we made our way back by the open river’s mouth and headed for the island’s back channel as we headed up the river at a rather slow pace. 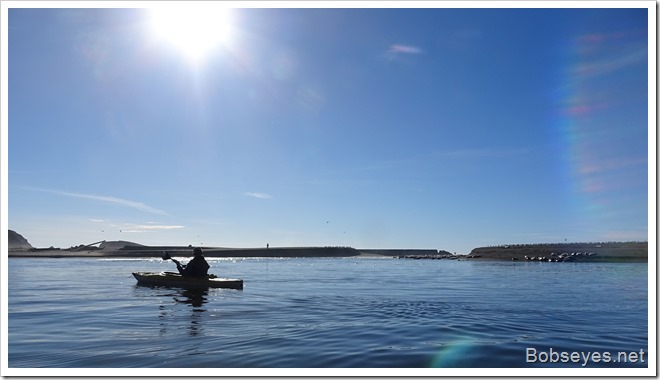 When we got up near Swamp Rock trailhead we decided we should go to shore for a walk and maybe try going up to swamp rock if the swamp wasn’t too wet so we went to shore here. 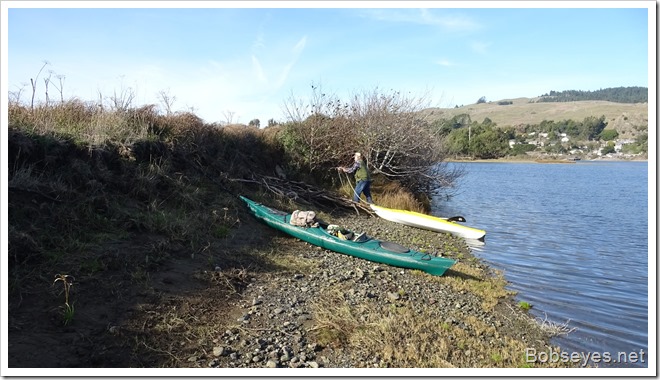 We tried to walk over to swamp rock but the swamp had water in it so we didn’t make it to the rock.

We turned and walked up the trail along the river which is called Poison Oak Alley Trail for good reason.

Some kind of horse grass

Here Ray is checking out this horse tail type grass which was growing along the trail. You can’t see it as it’s lost it leaves right now, but the place is also full of poison oak growing in among the grass. It’s dormant right now but still dangerous to people that get it. Ray and I’ve lived with it for years and don’t get it so we are good with it. 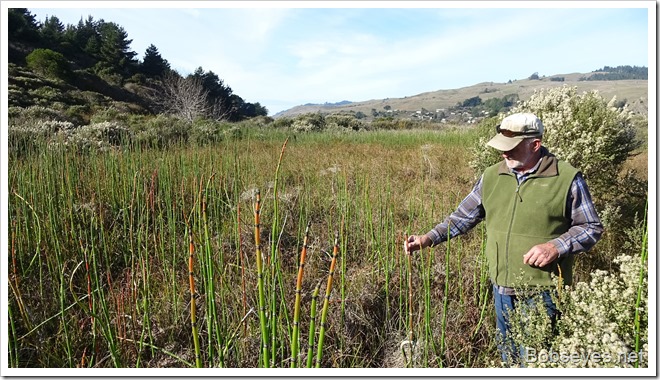 We walked up the  trail about half mile before stopping for a break under a tree.

Once rested up we headed back dropping back down into the river bed here near our boats. 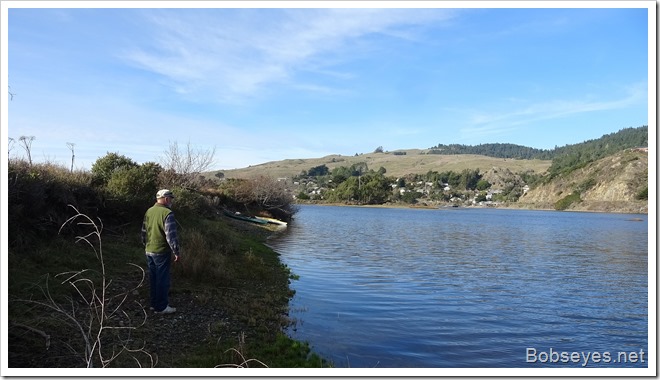 The wind came up a little, mostly a breeze as we headed back to the boat ramp at Jenner up ahead. 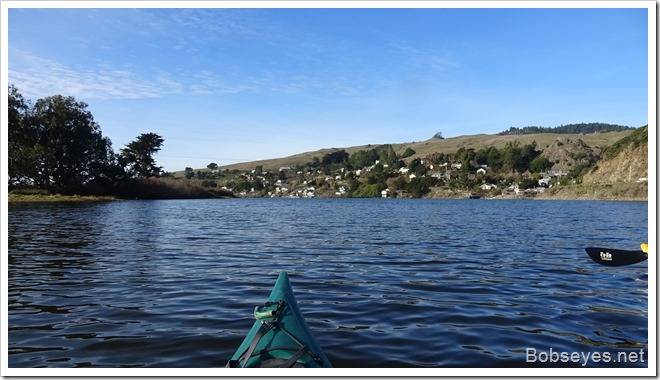 Once home I put a chicken in the pressure cooker and started it cooking while I got something to eat.

By now it was time to let the chickens out into the yard to graze so that’s what I did. While they were grazing I did some more pruning on some of my fruit trees until it was time for the chickens to go to roost when I went in the house after getting some firewood in for my woodstove.