Since I never made it up to the Hermit’s place the other day I thought today would be a good day to go up for a visit.

I entered the state park and stopped here to get a pic of the equipment they’ve been bringing in the last couple days. One of the guys doing the work was standing there so I started chatting with him and we shot the bull for a bit before I took off into the big trees. I learned a lot about what’s going on from him. 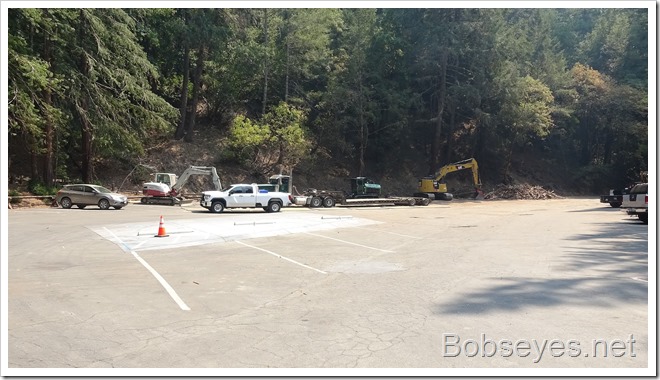 Once I was in the hills I was driving on this dirt road when I saw this building in the trees which relates a bit to my Great Grand Father the teamster. 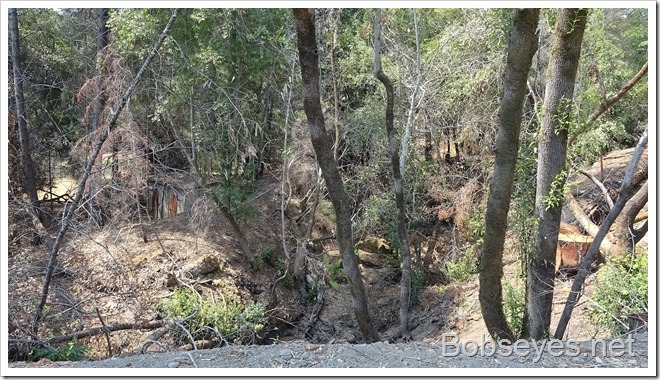 It’s concrete and has big steel doors that’s why it’s still there. 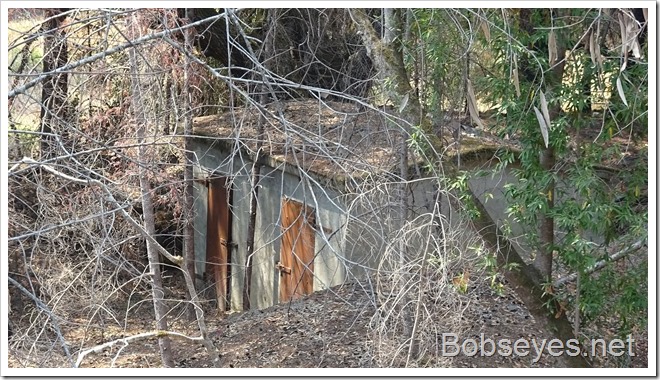 It’s a dynamite storage bunker that he would of used to feed dynamite to the mine as it’s on the way to the mine he was hauling stuff to. I don’t think the people living down in the valley would of wanted that much dynamite stored in their area,. This was likely a transport station. There’s another smaller one nearby that would have been for the blasting caps as you never store both in the  same place for safety reasons.

Nathan’s place was just above that

I parked and went up to his house and rang the bell hard but no one answered but I saw him in the house in his living room so I opened the door and gave him a shout. He was eating and had a very painful shoulder that seemed to be out from a recent fall so wasn’t doing real good. 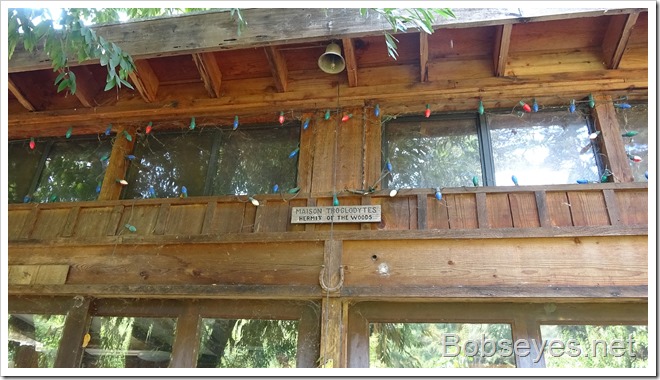 I said I’d go up and check out the trail a guy was working on to his spring area as the forest fire destroyed all the trails up there from heat which surprised me. That gave him enough time to finish eating.

On the way I went by the rehab work that was done on his rental house that burned up which looked like this. 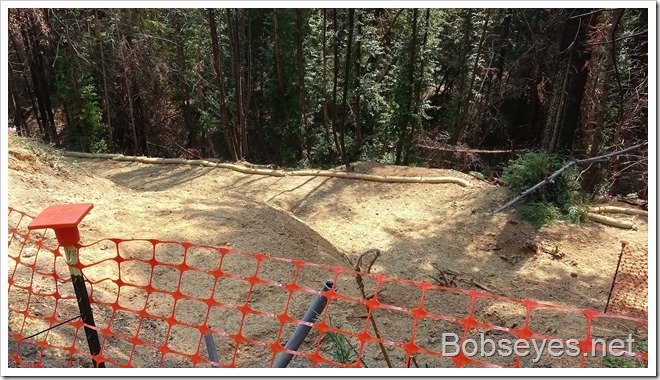 Here’s the start of the trail the guy is rebuilding, much easer going than before he put the wood in. 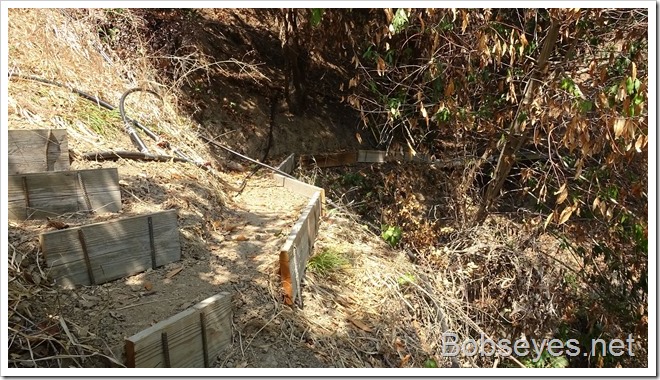 It didn’t go very far yet so I went up to the end and sat. Very peaceful area for sure. 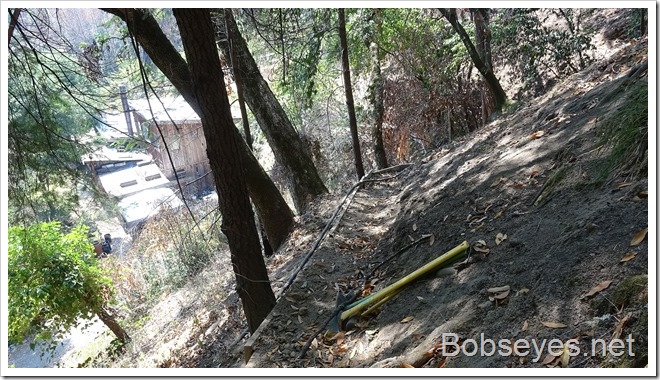 I came on down and we sat here and had a nice chat.

I don’t really like to take front-on pictures of people, I like more candid but since he had a big hole in his shirt I asked him to put the cup over it. :O) He was a good sport and obliged. 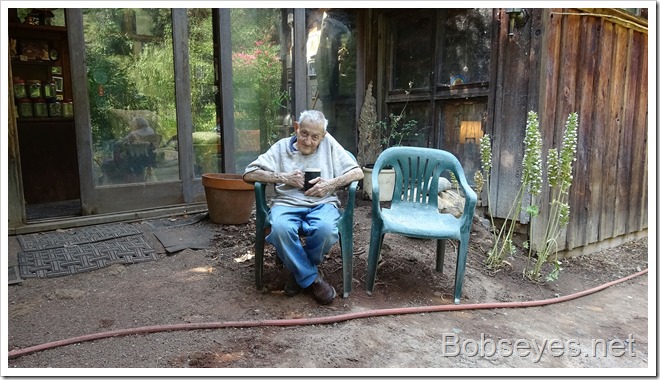 His shoulder was paining him quite a bit as we talked and eventually it got bad enough I thought it was a good idea to get on my way so I left and headed to  my car down below his house.

More rehab on the road to the burned up house. It looks like they are about done here. 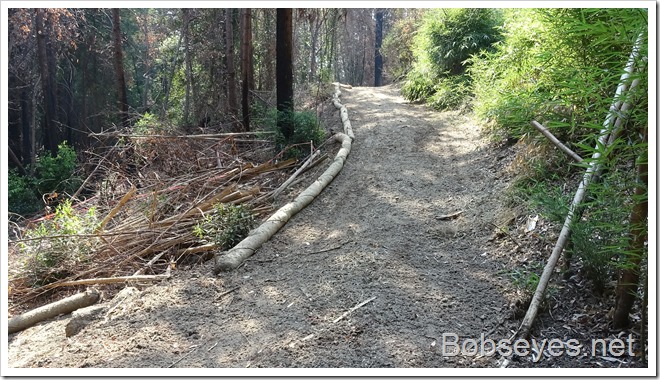 I headed on down the hill and on through the big redwoods and stopped at the parking lot where I came in and took a picture from another angle. I found out they are trucking this stuff to a place far away that has a big chip mill so at least it’s going to some use. They likely aren’t making much money on the deal as their main concern is getting rid of it and they have to haul it a very long ways. 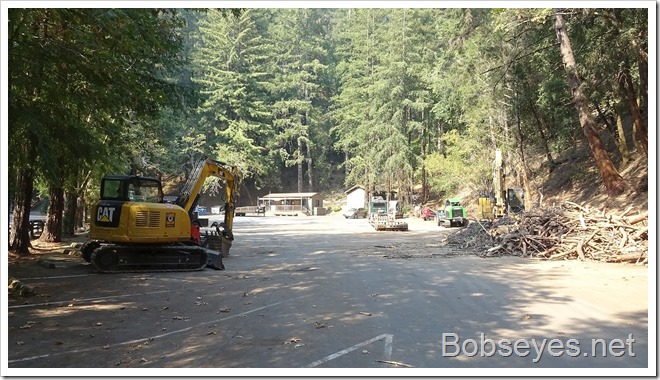 Back home I needed a  nap then did some chair hopping around the yard.

I gave my citrus trees some water as I’ve been trying to get them to grow more especially the one on the left which just started to grow more. 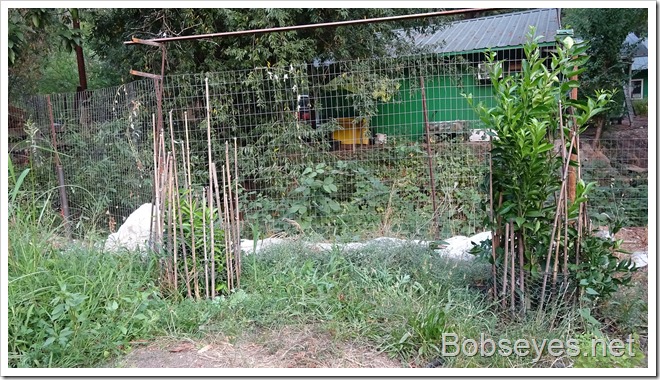 1 Response to Hermit Visit and an Old Dynamite Bunker