I’d planned to help my brother Tom get started repairing his steel roof that was leaking badly. I was only going to help him get started but it didn’t’ work out that way. :O)

So we got started around noon and I was there until 4.

Not much pitch, meaning slope.

Here’s the roof where we were working. Part of the problem is the roof doesn’t have much pitch, but it is what it is. 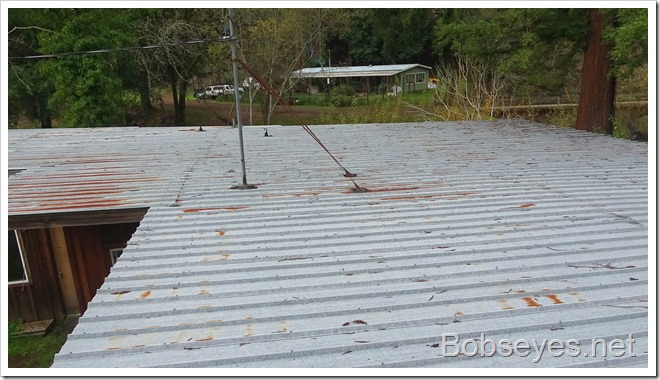 Started with this section

The first part we  needed to get fixed was this part with the bricks on it. The metal is going the wrong way and running under the overhang and causing leaking problems. 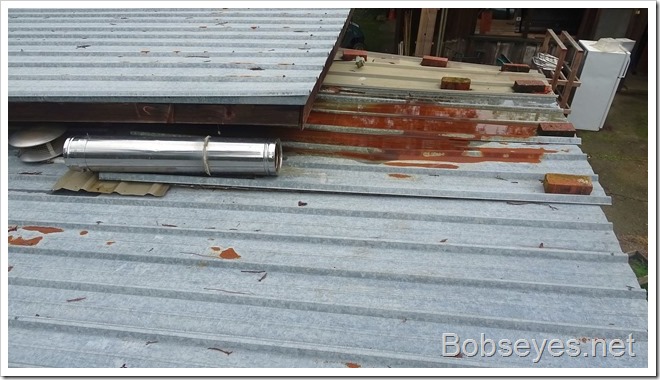 So to fix that problem we needed to turn the metal so it drains this way. This is just temporary until he gets some more new roofing to repair this area then it will get screwed down. 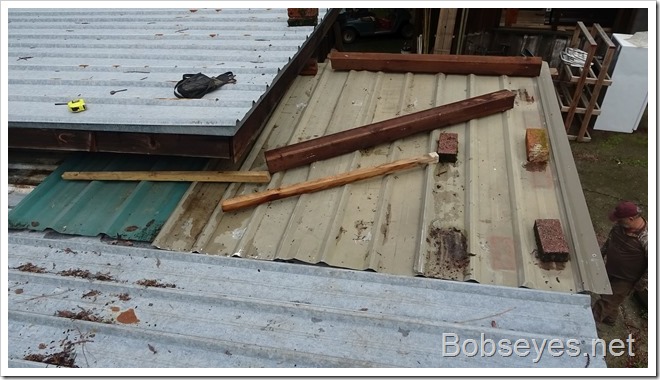 I said I’d help him repair this mess. Someone put the screws in too close to the edge. The screws have rubber washers to seal the screw on the top sheet but were the screw goes through the bottom sheet there is no seal and with the screws being close to the end of the sheet water gets under there and things leak. 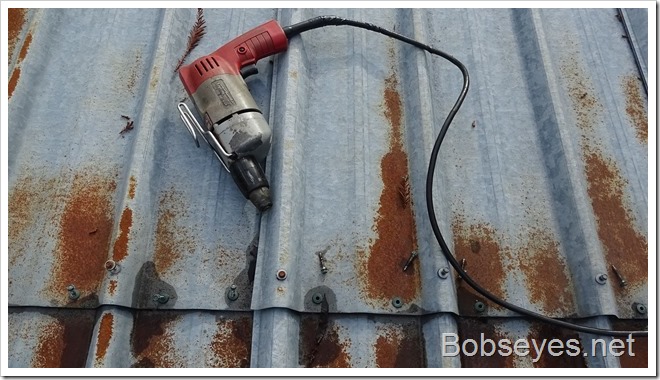 I needed to remove the screws so I could seal up the ones in the valleys with silicone to repair this problem. 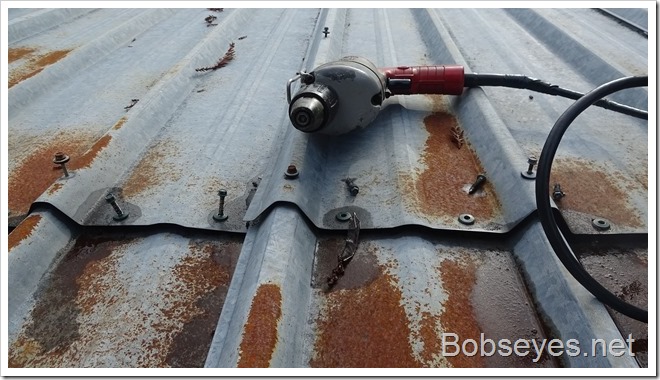 While I was working on that Tom was cutting the metal sheets so he could remove that hole and put a new piece of metal in there as that hole is not needed for a vent pipe anymore and it was leaking. 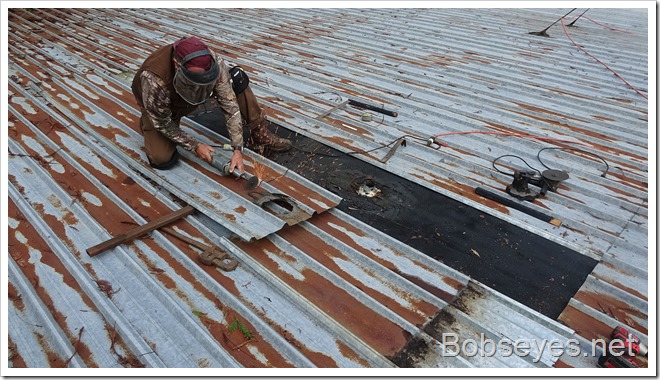 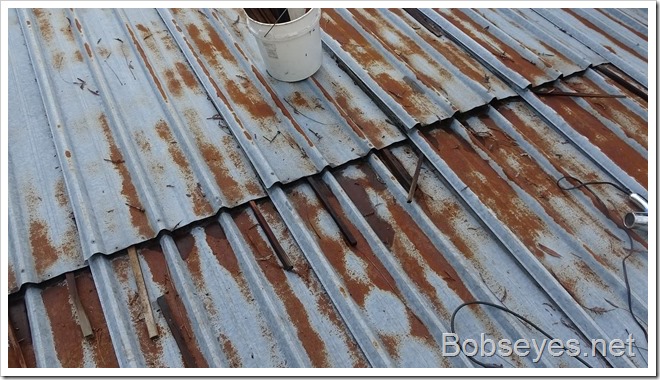 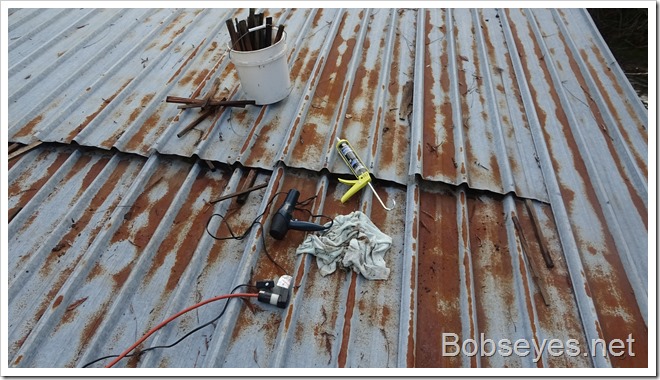 More than I thought

Before I started I thought there was only one row of screws like this, but after checking things out I found most of the roof was done like this so it looks like I might be at this for a couple days or so.

We have to repair all the places pipes go through the roof which means we have to get all the old tar off to check things out and repair them with new sealer. I like to use GE silicone on steel roofs when I can as it’s the only thing that seems to last a long time and not leak.

Tom is using one of those oscillating tools to remove the old tar. It’s tedious but seems t be working. Once he gets it all off we will reseal it using silicone if possible. He worked on cleaning those the rest of the day. 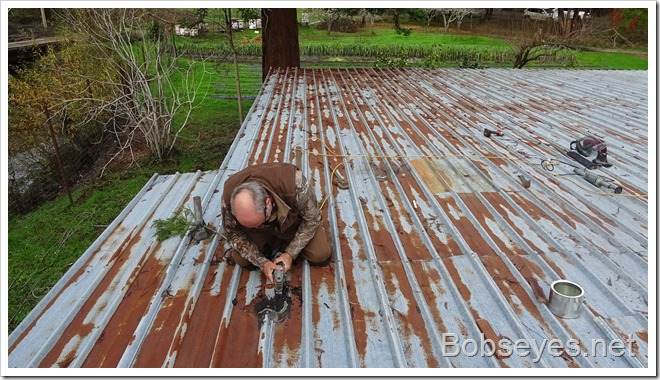 I c0ntinued working on removing screws and sealing up screw holes with silicone.

It was about 4 when we quit for the day. 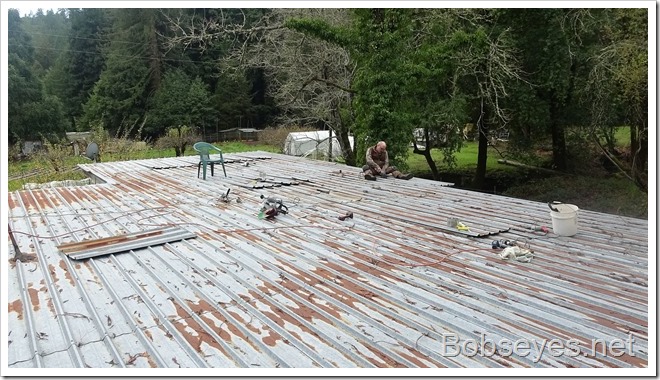 Sun would be nice

The sun is supposed to shine for the next couple of days so we will continue to work on this.

We got a good start.

In comments Terry asks about all the small redwoods and have they been clear cut? These redwoods have grown from the old redwood stumps as redwoods are a hard tree to kill.

Well yes, all the trees around here including in the Guerneville, Monte Rio and Occidental areas were all pretty much clear cut by 1900.

Here’s an old photo of Monte Rio showing that the hills were all clear cut. 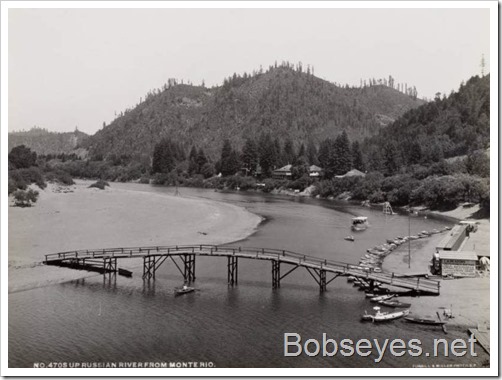 These were where the largest trees grew and the area used to be called
Big Bottom because the redwood trees were so huge at the bottoms.

Here’s an example of an old photo of what I’m talking about. The trees left in the Armstrong park are not this large but they are big. The park trees that aren’t as big where spared as they have a lot of rot in them which might be because beaver had the park all dammed up which might have caused the rot in the trees, not that the trees care much about the rot, but it did save them from being cut down.

All Armstrong Valley was full of this size tree and Guerneville too. I think their height was around 350 feet tall. 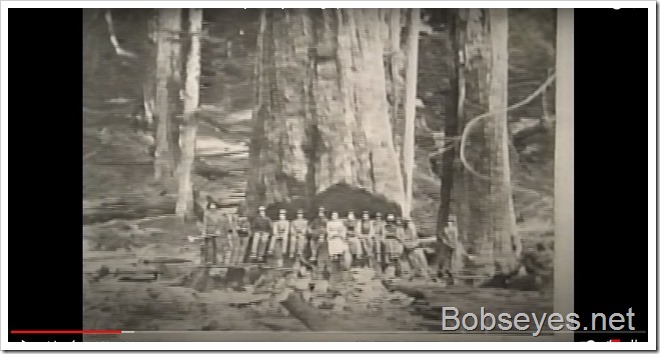