Helping the Hermit Get His Spring Water Lines Working

I fed the chickens and got something to eat this morning and then sat around the yard chair hopping for a couple hours as the day was so nice.

I had something to do but I wasn’t looking forward to it expecting the worst.

Headed up to the Hermit’s place

Around 1:30 I got in my car and drove up to the closed state park where the gate was closed but I had a key so I got in. 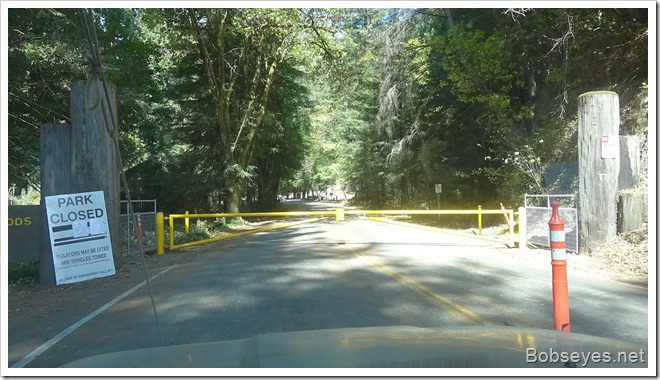 Since the park is closed there was no one in it just like when I was a kid and it wasn’t so popular like it is today.

I drove up through these big trees. 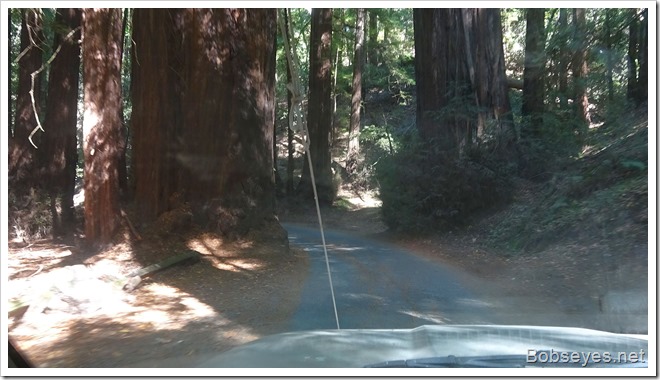 And on up the road liking the park’s emptiness. 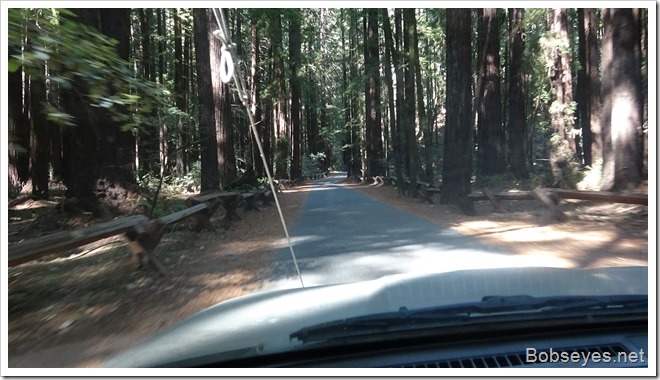 I found Nathan the Hermit feeding his wild birds. He likes the little chickadees the best. He just about ignored me until his bird feeding was done. 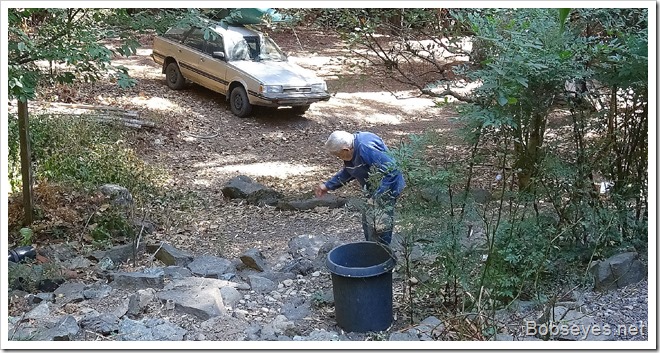 So I went up to see what the guys had done on hooking up his water spring with new pipe as the old pipe burned up in the recent forest fire.

I was surprised to find the area under the house water filter wet and the new pipe hooked up. Hummm, I think the Hermit is losing his mind as he said he didn’t have any water and the guys had quit on him. 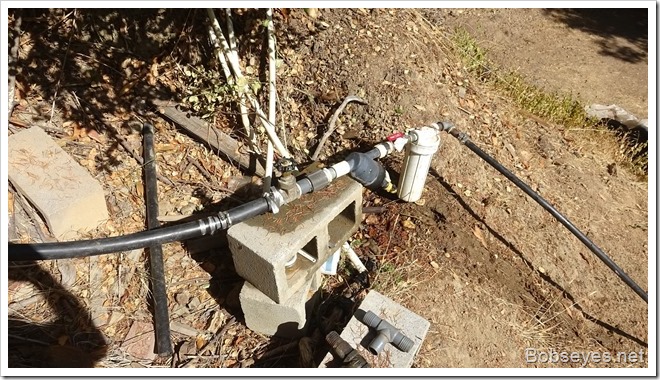 I opened the water outlet on the filter and lots of water came out so what the hey. 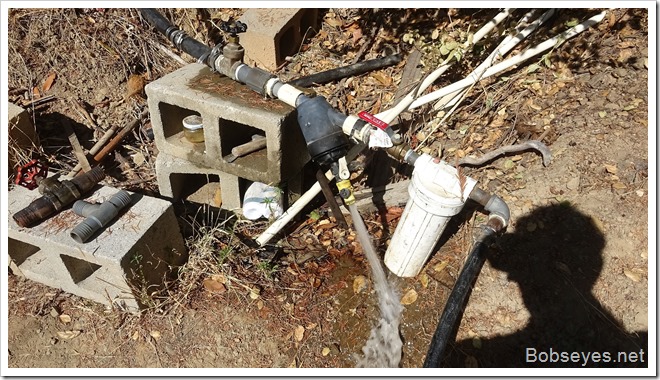 Didn’t do what they were told but ok

So I walked out the water line trail to see if they did the job right as I advised before going on my desert trip. I was disappointed to see they didn’t do what they were told and didn’t follow the trail with the pipe and now it will be  hard to maintain but hey, they did get the water to the house so ok.

A bad kink in the line

The only big problem I found was they had put a big kink in the plastic water line and it was in a shear cliff area so not easy to fix so I decided it’d have to be ok for now as long as some water made it through the kinked line which it seemed to be doing.

I went back to the house and waited for the Hermit to finish his bird feeding ritual. :O)

I caught him sitting down and he noticed the camera so a little smile leaked out. 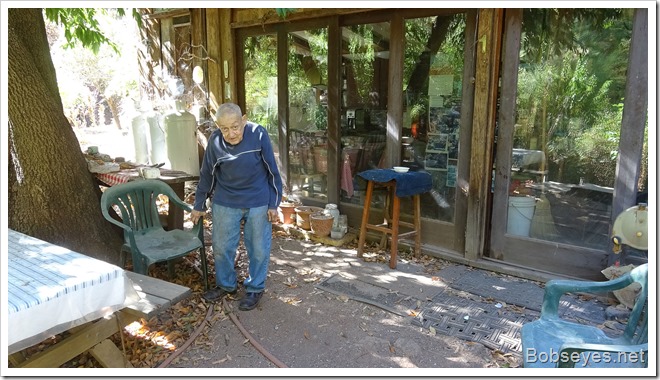 Well we had a talk and I told him I think his house has water and he didn’t believe me so we went in his kitchen and he turned on the sink water and was surprised to find there was water there.

But he still wasn’t happy. He kept saying they didn’t hook up the garden water pipe and I said he didn’t need it as he could use the water from the house and the pipe I thought he wanted hooked up had all burned up.

It turned out he was talking about another pipe once I was able to work it out of him so I took a look at it and needed a tee to hook it into the line but first I checked the pipe out and found it had burned in this one small place which needed to be repaired with a coupler spliced in after cutting the bad part out.

Burned up piece of water pipe I replaced. 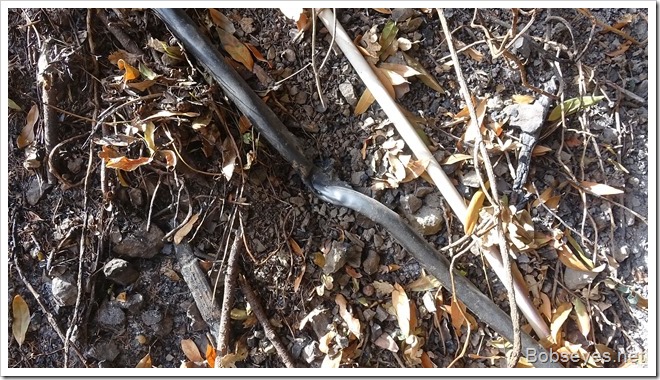 I got that part fixed and installed the tee in the main water line but there was a small hole in the plastic tee so I cut that one out and found another one to install.

After I got the water lines all fixed up I had him test out the water and he was finally happy. 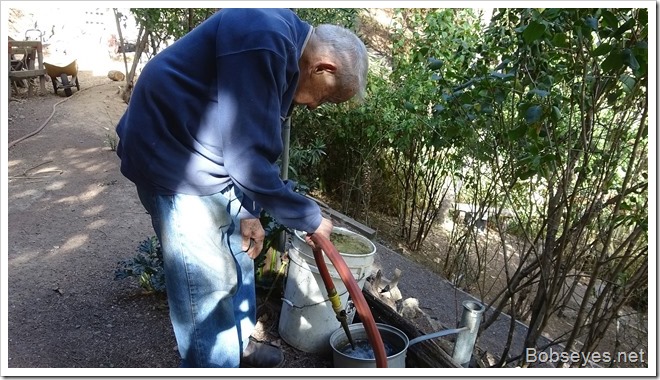 Just a note to commenters about springs in our area. In the old days if you wanted to build a cabin or a house you looked for a spring or some kind of water to build it by as there wasn’t any water pipes or much in the way of water storage tanks so you needed a water supply close by. People in town have a water supply of some kind but people living in the country need some kind of their own water supply.

So out in the hills there are a lot of small water springs so people in the country are fortunate enough to have an old spring on their place which usually has better water than a well. Springs on a hill have a big advantage if one’s cabin is below the spring as there’s no power needed to get the water to the house for use so one always has water even in a power outage. Water flows down hill nicely.

And one’s spring water is much better than what they sell to the city people, another plus. :O)

The only draw back to a spring is they can take a bit more maintenance but that maintenance is a lot less costly then installing a new water pump.

The biggest problem with springs today is modern people don’t know how to take care of a spring so when something goes wrong with the spring instead of cleaning it out they hire a well driller and install all the expensive pump stuff.

Anyway I’m happy to be on our own springs and not be on government controlled water sources that serves up water that isn’t so good in the first place. If that water was so good people wouldn’t be  buying all the bottled water to drink.

Never know but don’t need to

Ok, I had Nathan the Hermit all fixed up at least for now and he was happy his water was working. I’ll not likely ever know the story of why his helpers quit. He did say they took a lot of his water pipe parts and they appeared to have taken my nice new shovel as I couldn’t find it.

I drove on back down through the park and home for a nap. That pretty much wore me out walking around on the steep hills so the rest of the day was chair hopping and puttering around in the yard with my chickens.