Flume 2 and a new tablet

My brother Mike asked me to help him set up his new water meter as the city he lives in has some real strict water rationing. He can use 72 gallons a day. He has a lot of citrus in his yard so to keep them alive and not get a big fine he needs to know how much water he’s using as he using it.

So the city will give him a rebate on this water monitoring system, called a Flume 2 and he just received it. To monitor it he also needs some kind of device like a cell phone but he doesn’t have one of those that goes on the internet, so we ordered up a new tablet to do the job.

Neither one of us knows how to use the tablet, although it’s like my cell phone that I rarely use.

So today I drove on over to Healdsburg to check on a feed store as my old feed store went out of business. Well, that feed store didn’t work out as they don’t carry seeds which I feed my chickens to stay away from corn.

I knew the owner, many years ago and met him at the door. I was amazed he still remembered me and we had a good bull session.

I’ll have to try some other place for my chicken seeds.

Getting the tablet to work

Anyway back to our project. First we needed to get the new tablet recognized by Google. Like most people my brothers password book was pretty screwed up. Google said this is a new device and not recognized and we couldn’t get signed in to his account to get the tablet to work so we could get the Flume app at the Google store.

So we tried and tried different things and finally Google let us in so now the tablet would function as it should and we could get to installing the Fume 2 unit.

So here’s the new tablet and the Flume 2 water sensing units on the right. 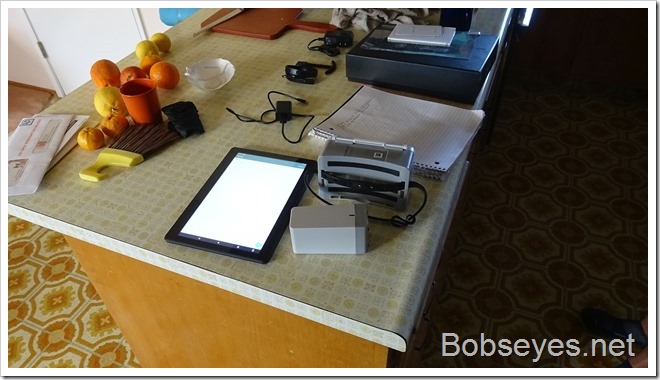 The Flume 2 app also wanted me to take some pictures of the barcodes on each of their boxes so I had to figure out how to do that with the tablet. Of course I took the wrong box then the one they asked for first as I didn’t read carefully so I messed up and was stuck as I couldn’t correct the mistake, so I set up another account and did it right and we were going again.

So after installing their app and signing up with their web page where the water info will be stored it was time to go out and mount the water sensor on his water  main gauge in this hole. I brought out the tablet to take a picture of the meter for them. 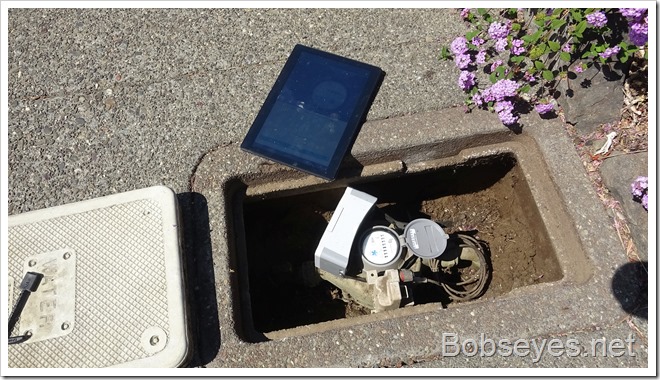 Here is the Flume sensor unit mounted on the water gauge meter. It just straps onto the meter. 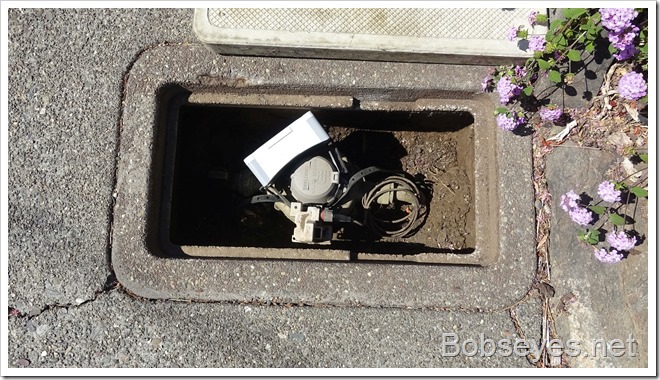 Now taking a picture of this meter with the tablet wasn’t as easy as it should be as it was very hard to hold the tablet still enough to get a good focus so the numbers could be read, but after much fussing I got one good enough. 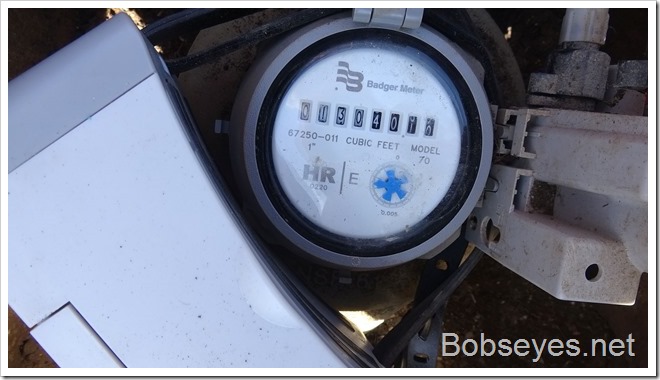 Time to calibrate the unit

So now it was calibration time. Turn on some water and let it run while in calibrate mode. We turned  on the water at the kitchen sink. But it said it wouldn’t calibrate so I sent them a message on their chat. The lady said open up some more water so he went outside and opened a hose faucet and we got a success on the calibration.

So now I had to teach my brother how to use the tablet so he could monitor his water usage so I worked at that. It’s a bit harder as he has some Parkinson’s disease so this kind of stuff is a bit tough on him, but we got it by going over and over, even once more before I left.

I was worn out when I went home after five so I pretty much crashed for the rest of the day.

Too many broody hens

Just before dark when I went out to chick on my chickens there were eight broody hens in the nest boxes. What to do as I don’t need anymore chicks.

My bottom nest boxes, I can just fold up the perch and it closes the nest boxes, but what to do about the top nests that don’t have this feature, maybe a board will do it, so I found a board and it fix just right.

I kicked all the chickens out of the nests and closed them up. They weren’t liking this and wanted back in but it worked and they eventually had to go up onto the roost with the rest of the chickens. 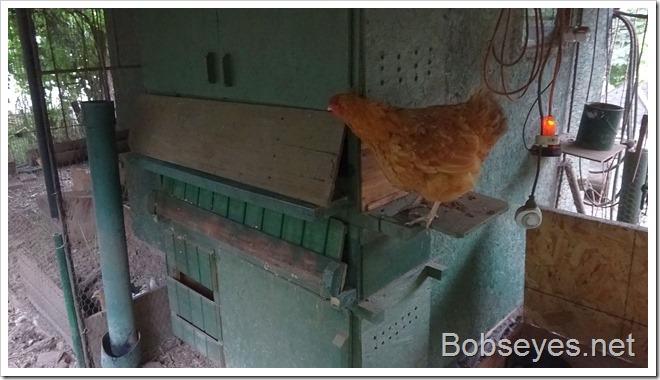 Even though it was a hassle we did get my brother’s stuff done.