It was supposed to rain a little today but when I got up it hadn’t  happened yet.

I went out and fed and watered the chickens and was sitting around figuring out what I wanted to do today when my brother Barry came walking in the yard.

The new electric furnace for our family’s rental unit had come in and he had some questions on installing it and wanted some advice so I walked over to the unit to have a look.

The people renting the unit from us use a wood stove and don’t use the electric unit, but we wanted to get it fixed up so it could be used it need be. So that took the pressure off of us as far as getting it done which was good as we didn’t get er done.

Out with the air conditioner

He asked if the input wires where hot or not as he thought the inside circuit breakers where turned off. I measured the wires and found them still hot so apparently the breakers where not off. The people renting the unit weren’t home so we were limited what we could do to get it installed.

We checked things out reviewed what needed to be done to complete the  job.

Here’s Barry checking out the thermostat wires. We have some extra wires from the air conditioner that needed to be identified so we can remove them and hook up the heater unit to the right wires. We decided we really need to get inside to the thermostat to figure that out and get it hooked up so that had to wait. 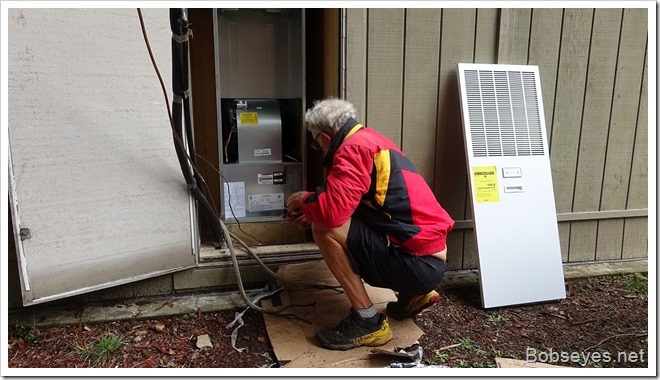 Barry gets under the house

Barry decided to pull some of the copper pipes out from under the unit that will no longer be needed so he pulled some of the back panels off so he could get under the house while I checked out the installation manual until I was satisfied  I knew what needed to be done to make the new unit work.

Here’s Barry nosing around getting under the house and the old furnace unit laying there ready for the dump. That big fan unit will go as it’s part of the air conditioning unit we are taking out. 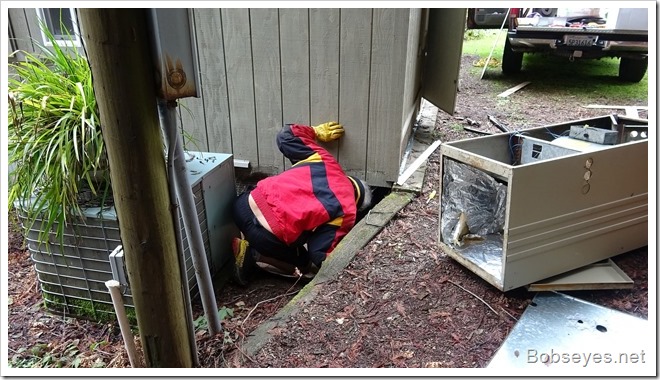 Eventually I left Barry at it and went on home to do some stuff but it was starting to rain lightly so there wasn’t a lot I could do or wanted to do for that matter.

I cleaned up around the new roof on the chicken coop enough to get the smoker unit under the new roof. I had to try a couple different ways until I got something I thought would work out with the smoker. 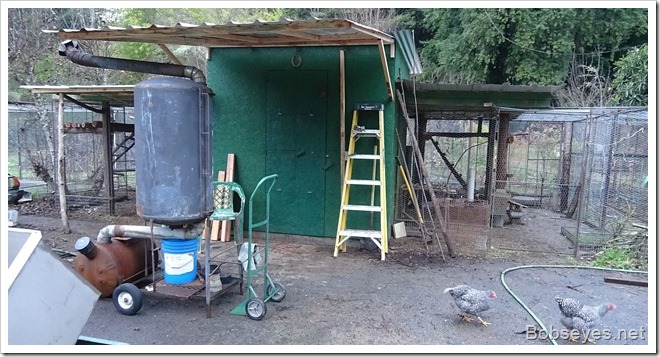 Being one of the shortest days of the year the day went fast and it was time to let the chickens out to graze so I did.

After an hour they came back to roost for the night and I shut them in and went on in myself.