Last night it poured pretty much all night starting around six PM. I had over five inches of rain which was nice.

The creek that went by my house was ripping when I got it going this morning. First thing I did was go across the road where I ran into my brother Tom and a neighbor. I asked them about damage as they get up a lot sooner than I do, but all seemed to be mostly well in that department.

Decided to drive on down to Jenner but never made it

I got my camera and was headed down to towards Jenner, not to yak, but to just check things out for something to do, but I didn’t get very far before I ran into a closed road down by the school about two miles from my house. Ray lives there so I drove over to see how he was doing. Apparently the water came up about six inches around his house, but he had it all under control and it was down by now.

However all his neighbors where out in front of his house looking at this undercut wash from the same creek that goes by my house. It doesn’t look too bad from here, but it’s undercut the road a few feet. You can see the shadow on the asphalt where there is no road base under it.  It’s a bit dangerous for unsuspecting cars and trucks that where going by. 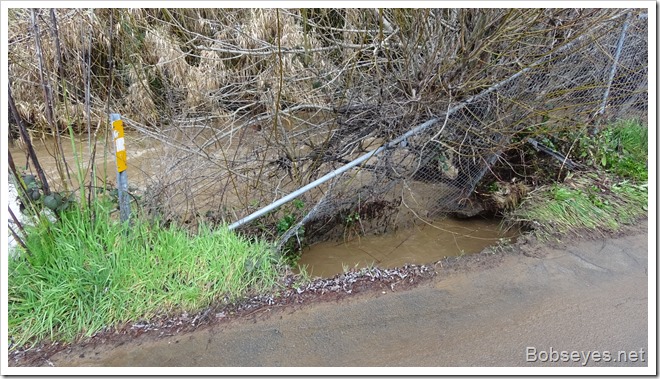 Road to town flooded a bit

I shot the bull with Ray and some of his neighbors for a bit, then drove the short distance to where the creek went over the road by the elementary school here. 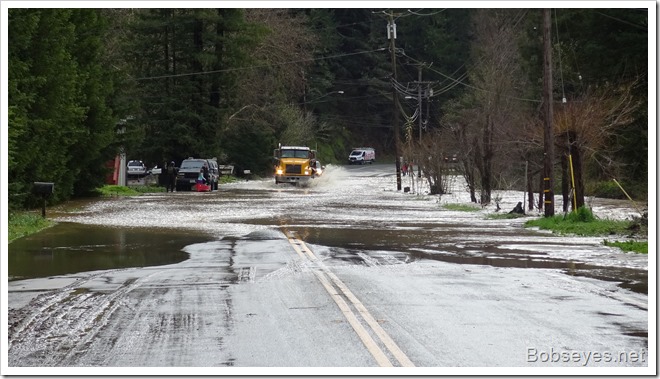 That’s a county road department truck coming through as the county maintenance yard is just up ahead on this road. I could of driven through it too, but it’s not worth getting muddy water and  sand in one’s car’s bearings and brakes, so I didn’t attempt it. In younger days, I would likely have done so, but in my older age, I’ve learned a thing or two.

I did stop the truck and informed them about the under cut road by Ray’s house and advised them that they could use a couple signs there which they said they’d take care of.

Good time to ride up the hill to check things out

From there I drove on back to my  house and decided to take my quad runner up into the hills on our family property to see how things were doing. I got my brother’s small chain saw and a shovel and drove across the road to inform my neighbor which I had been talking to this morning that the road was still flooded by the school as he had told me his wife was getting off work this afternoon and needed to know. I advised him to tell his wife not to drive trough it as it’s hard on the car and advised she take the Rio Nido road instead which is a narrow little road over the hill to his road.

From there I continued on, stopping to check the only culvert we have on the property where I had lost a shovel trying to clear it during an earlier storm. I removed one small branch in the opening and continued on. 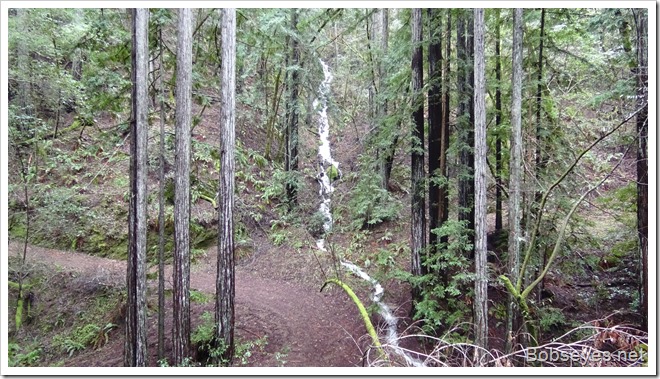 No culvert so I could pass

This is one of the little creeks that come out of the hills here. Note that there is no culvert here or there would have been a big wash out and I wouldn’t have been able to cross. There is only one culvert on the property and that is where I lost my shovel earlier. 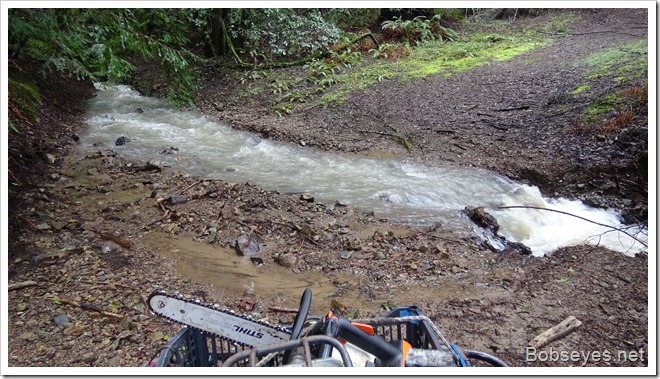 Headed for the Guerneville overlook up top

I worked my way up the hill as I wanted to check things and have a look at the overlook of the small town of Guerneville. Just below the top, I ran into these down trees and used the chainsaw to cut enough out to get by. 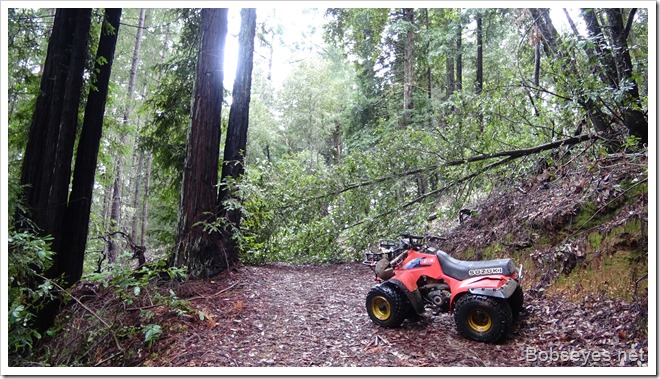 I made it to the ridge to the overlook here and had a look. 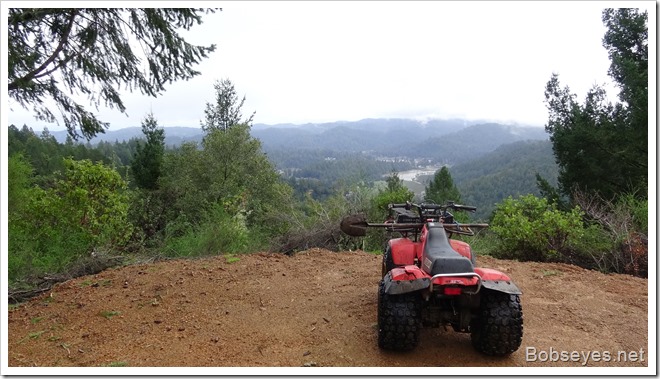 View of the little town of Guerneville

Here’s the town of Guerneville from the overlook. The water spelling into Korbel’s vineyard is from the same creek that goes by my house and the same one that has flooded the road by the school which would be on the other side of that small hill to the left. The school would be just out of the picture on the center left. 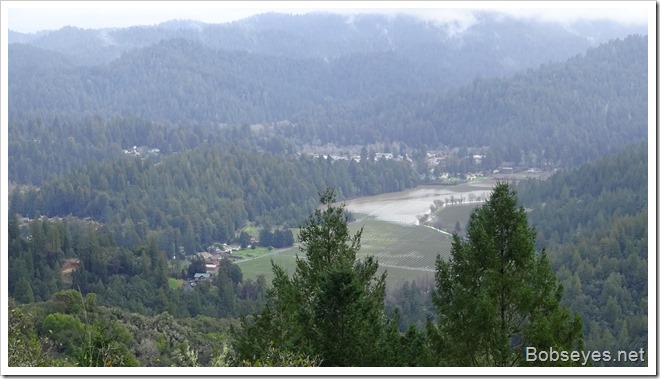 A couple small slides blocked me

I left that spot and started driving around the roads to check for damage. I didn’t find any wash out’s because there aren’t any culvert’s up there to get washed out. I did find two or three small slides.

Here’s the largest one I found and had to turn around and take another road. 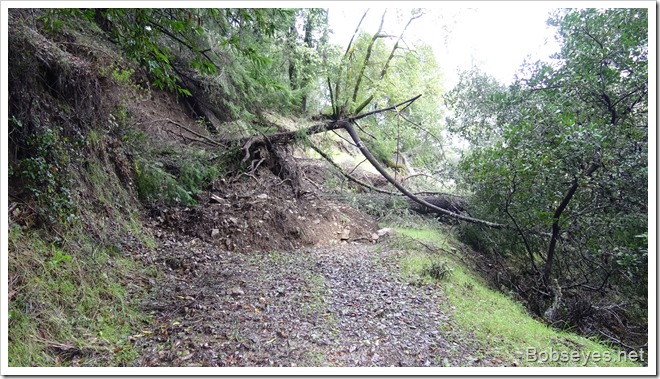 So, I turned around and took this road to get past the slide. 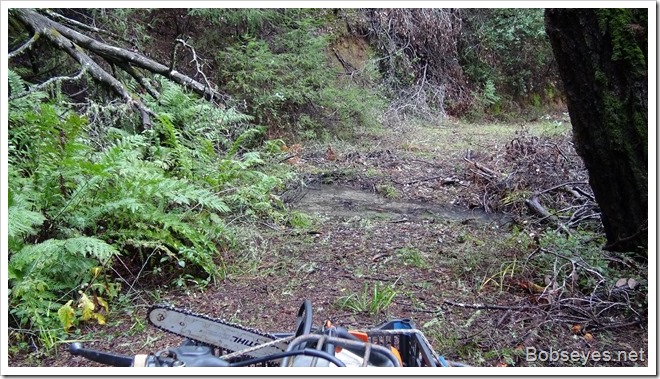 Other than a lot of small branches on the roads from the winds, I didn’t find too  much damage.

Headed to an area we call Evergreen Pass

Here’s one of the roads I drove down headed for Evergreen pass. 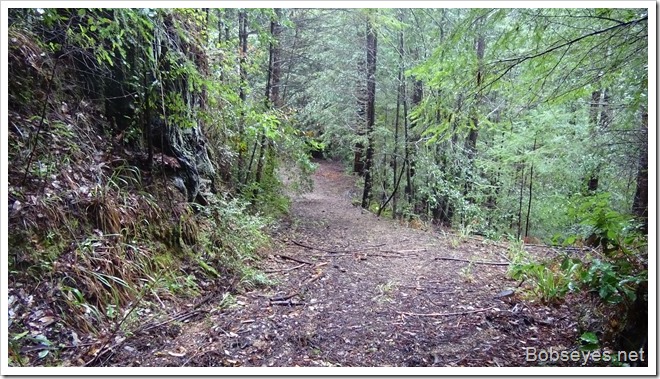 I stopped here to move the wood debrie off the road. The roads not washed out although it may look like it as the road goes around that tree and is intact. I used the logs to build a dam in the ditch to catch any more debrie coming down the hill on the next storm and continued on to the Evergreen Pass area. 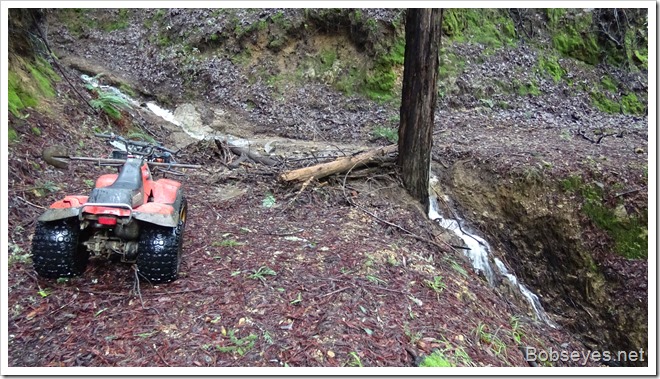 Evergreen pass is on that little knoll there in the background for the two Mikes and David that used to camp up there. I turned around at this down fir tree as I only had a small chain saw and didn’t want to use up all the gas in it in case I needed to cut some more smaller trees out of my way. 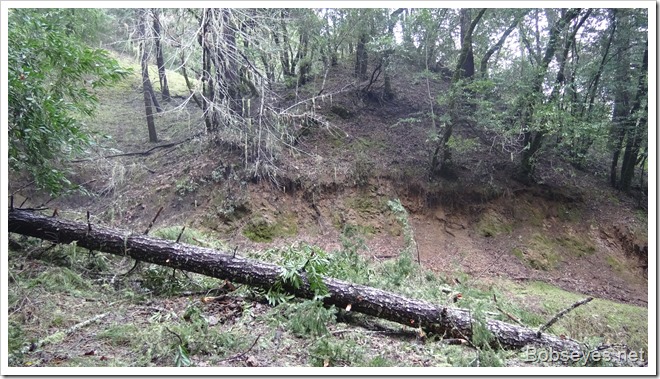 I turned around and went back the way I came. The road looked like this going back from the downed fir tree. 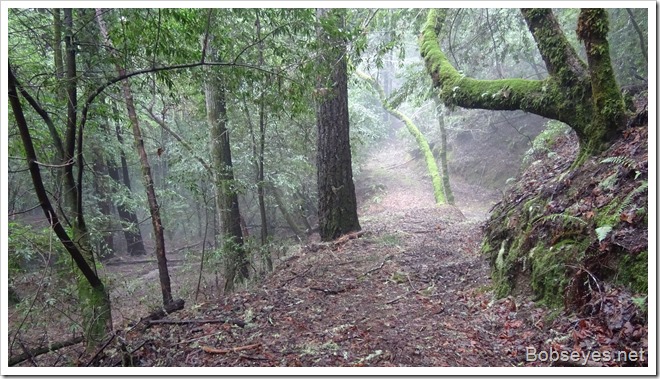 I continued on home stopping in a couple places to divert water back into ditches in several places, but all in all things looked pretty good.

Time for a little break

I returned home where I went in the house for a short break.

I still had some gas in the chain saw and there was still a couple hours left in the day, so I went out in the yard and cut up all the big redwood limbs that had fallen out of the trees during the storms.

Then I moved some of the olive tree brush to what I call my habitat piles that  I use to stack up brush I cut up in my yard. I only had a little steam left in me, so I moved about three piles of it to the big habitat pile and I was pretty warn out by now, ,but I did get some exercise moving it. I  pushed hard enough to get some elevated heart rate to keep my doctors happy as they always ask if I push a little extra to get my heart going. I always say, you  mean elevated heart rate just to show them I’m not so dumb. :O)

And last, but not least spring is springing

I did notice the daffodils are starting to bloom which means spring is springing so the weather should start to improve a bit. 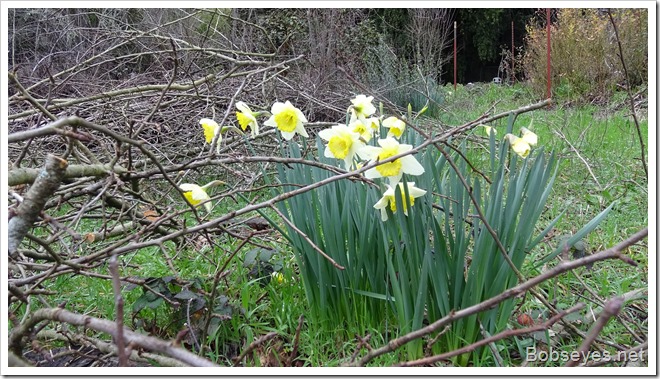 I sat around the yard a bit just before dark as it was a nice day and that was my day for a  nice one.