I have a nice camp spot

We’ve got a  couple days or so of rain, so I’m hanging out at my cap spot here. It’s a road rock yard just above highway 101 overlooking the Pacific ocean. This is last night as the sun was going down. 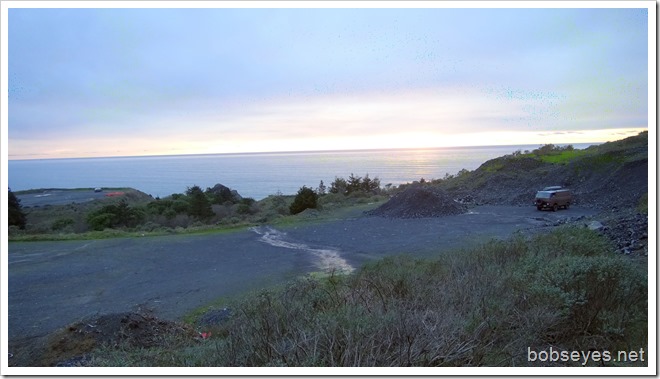 It’s raining lightly and I expect it to continue.

A couple nights ago I went over to Steve’s camp at Elk River RV Resort which is on the elk river. We’d  been crabbing most of the day at Port Orford Harbor and we had some crab to eat.

Here’s Steve’s camp. He seems to have it set up to be cozy in all the rain. He’s got an electric hookup so is nice and toasty. 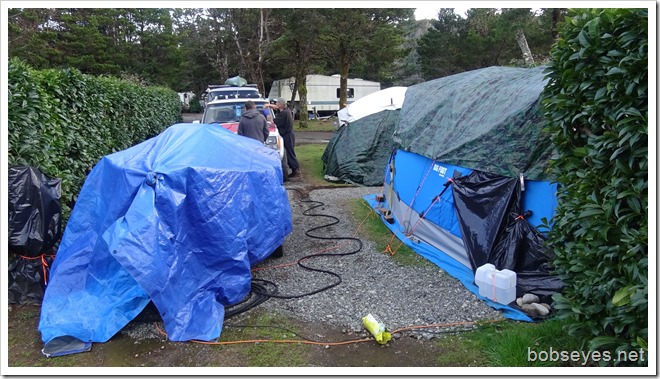 I was thinking of staying here too, but it’s too close together for me and besides I don’t really need any of the hookup stuff, so I elected not to camp here, although the guy was going to give me a very fair price.

The cooked up the crab and we ate a couple apiece inside his tent which looks like this. 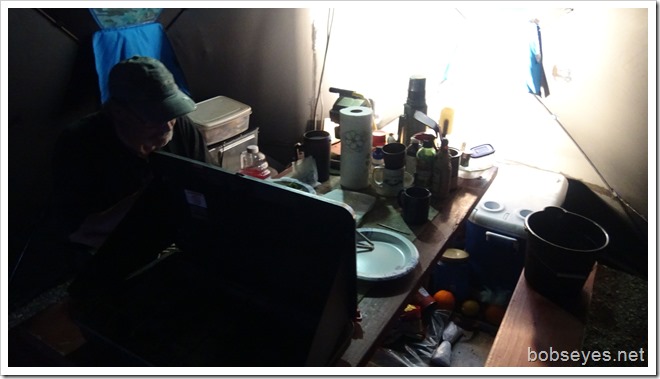 The next day I decided to kayak Garrison Lake in Port Orford. I thought I better get a yak in before the rains came the next day.

Here’s where I put my boat in the water around two PM. 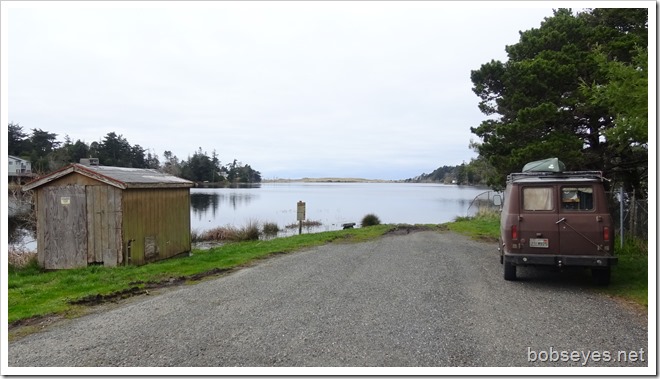 I arrived earlier than that and was just taking it easy in my van doing some reading and finally decided I better get out there before the day was over.

It’s not a very big lake, one could paddle across it in about ten minute, but if one just paddles around the edge of it, it has a lot of inlets, so then the lake is fairly big, so that’s what I did, paddled all around it’s edges to make a big loop. 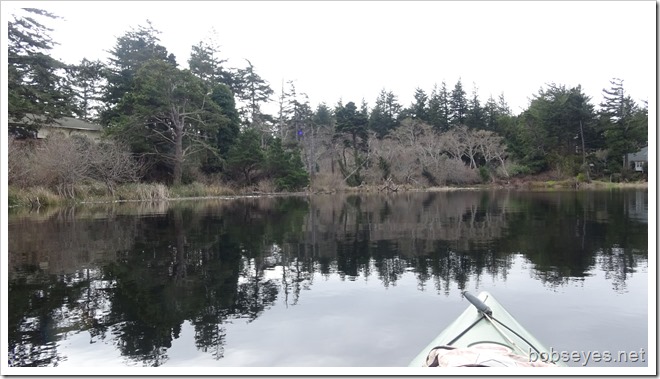 It was cool out and a bit overcast, so there wasn’t a lot of bird life out a about.

I passed by this great blue heron a couple times. 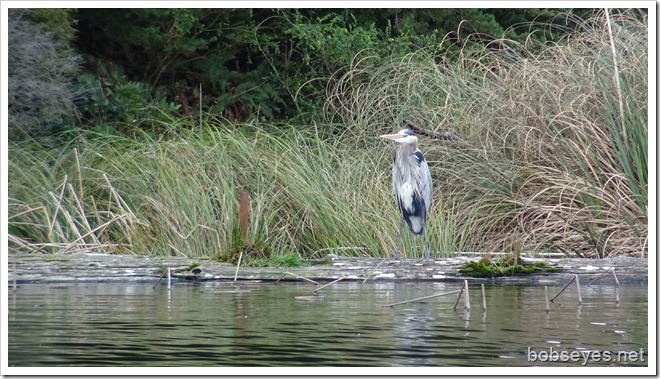 I’m continuing around the lake going counter clockwise. The ocean is on the other side of that sand duns in the middle and I could hear the ocean beating on the beach. 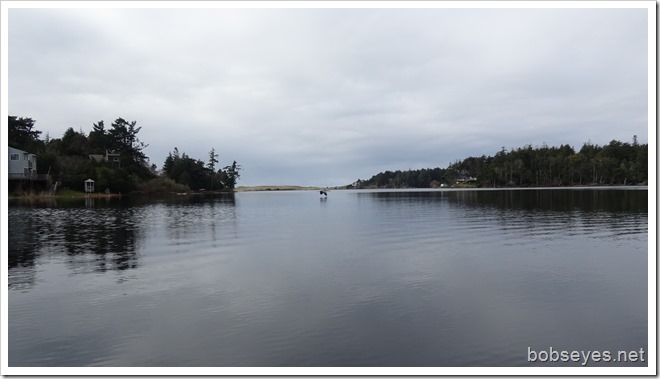 This was a place I stopped in the reeds about half way around the lake. 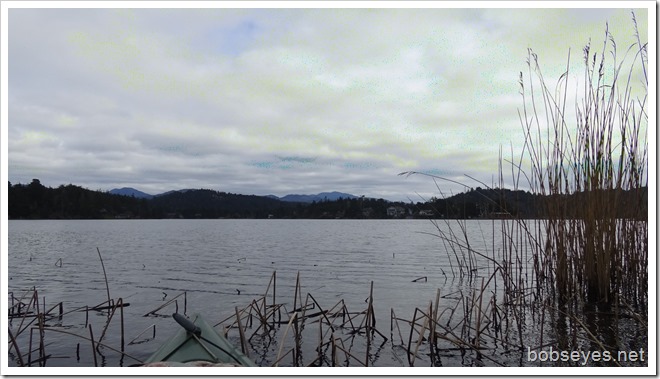 I paddled into this inlet to the end and back out. 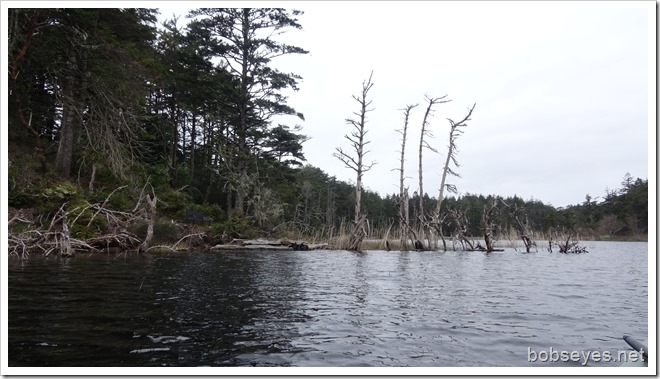 This egret was fishing but not doing too good as I watched. 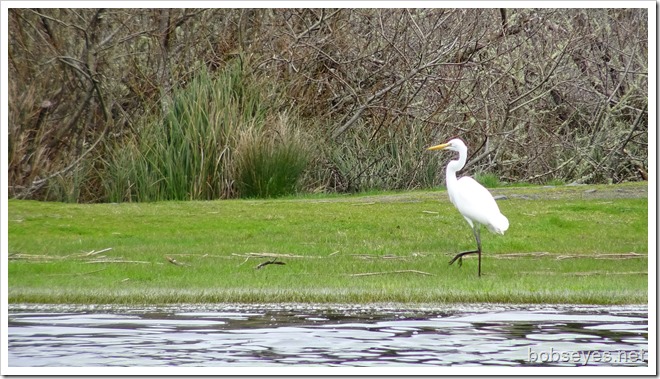 I spied this critter up in a tree I went past. Some kind of stick bird or a big insect of some kind. 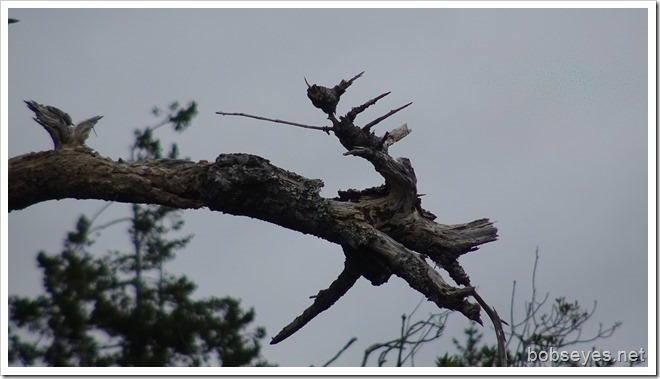 Hanging at the harbor

When I left there I went over to the library to do internet stuff, then I drove on down to the Port Orford Harbor and parked here until almost dark. 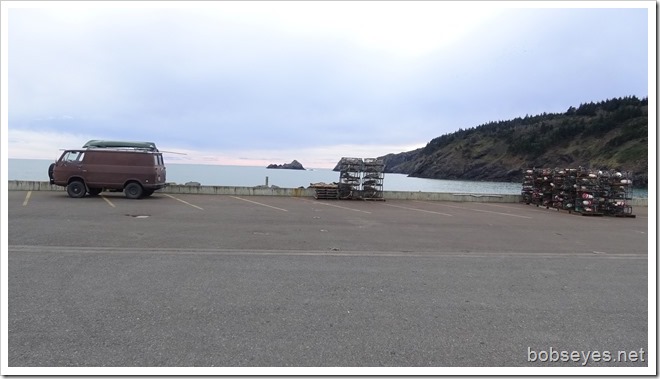 I heard this guy making I’m excited type noises. It appears he caught his first crab. He was fishing off the end of the pier with a ring net they use for crabbing. 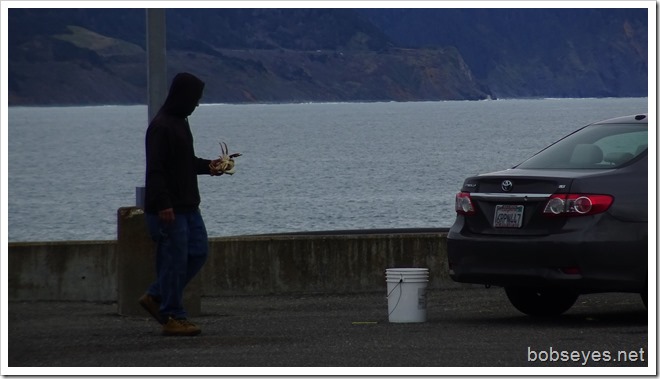 Hauling out the boats

I walked around a bit checking things out. They pull all the boats out of the water and put them on these trailers. 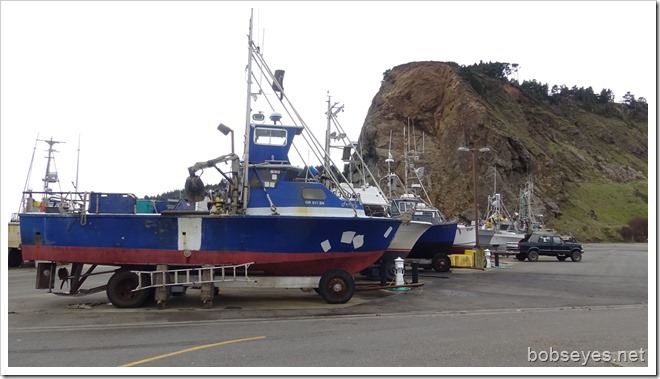 I watched them pull this one up and put it on a trailer. It’s maybe a little expensive to do it this way, but the boats not being stored in the water likely saves a lot of money on maintenance. 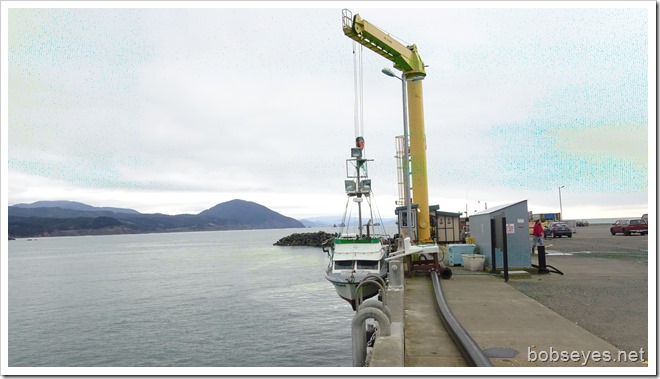 I stopped and shot the bull with Tony an older guy that buys commercial fish and crab  off the boats and has been doing this for a long time. He’s seventy five so has a lot of good stories to tell and likes to tell them too. :O)

It’s not raining as hard as I expected it to do today at least not so far. I think I’ll take a ride to town and post this at the library and then go down to the harbor to hang out for a bit and just play lazy for the rest of the day.

I have quite a few Louie Lamoure books to keep me busy.