Guerneville To Quartzsite Looking for Adventure

I woke up Thursday and got the last things in the van and took off stopping in Guerneville to gas up and get a couple food items. I left town on the back roads headed for the ocean but soon was in the thick of traffic going east headed for highway 5 which heads south.

I drove all day down highway 5 through traffic and made it to the Bakersfield area just before dark.

Instead of taking the highway 58 road east from there I went down highway 5 a few more miles and took the 223 road which turned out to also be a truckers route back to highway 58 where I was headed.

The 223 road was called Bear Mountain road and looking ahead I could see nothing but snow up on those mountains where I was going so I was wondering if I’d get stopped by snow.

But considering it was a truck route I was hoping I might get through.

Well the road turned out to be pretty good. I made it to highway 58 where the 223 road comes onto it by a National Cemetery. I stopped there on the side of the road for a cup of coffee and something to eat. It wasn’t raining or showing in this spot.

After a break I got back on the road and hit heavy snow in just a few miles from where I stopped. It was really coming down, a blizzard but luckily it wasn’t sticking. I was also thinking good to have this good set of mud and snow tires on the rig for this kind of stuff.

Well the snow came down hard all the way over the pass but I made it.

Here’s a photo I took going down highway 5. I’ve never seen it so green and lush before. 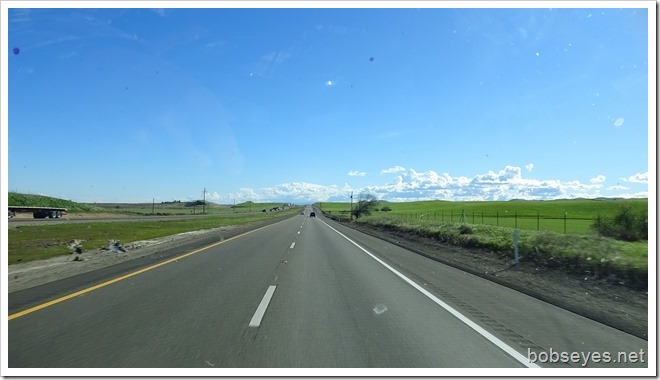 Once I got over the pass and started down the other side the snow soon let up and it was just night driving with only a few cars on the road. 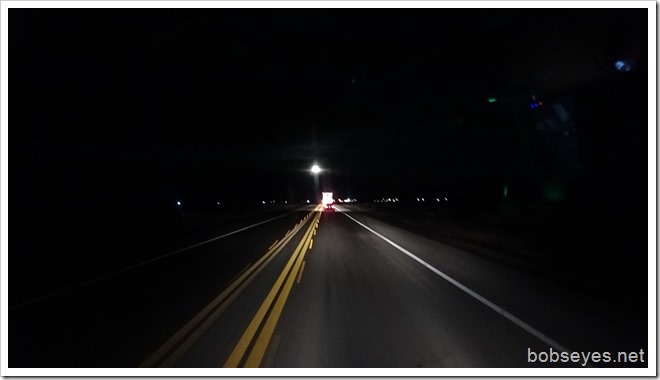 I had about 3 hours to go to get to my camp spot at Essex road. Further than I like to go but I knew there was a camp spot there.

I got to the camp spot about midnight and soon was in bed.

I got up late the next morning and continued east on highway 40 and arrived in Parker about 4PM. I gassed up the rig and did some shopping and got back on the highway 95 south to Quartzsite. It was a bit windy blowing the van around most of the day.

Here’s one of the freeways I traveled today. Not a lot of traffic just the way I like it. I was looking at all that snow on the mountains up ahead. 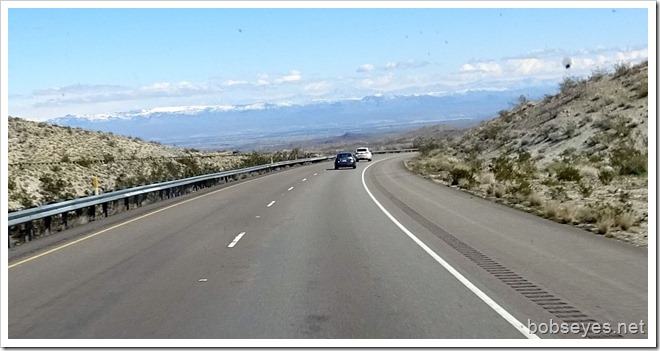 Not too far from Quartzsite here, almost there. My kind of desert. 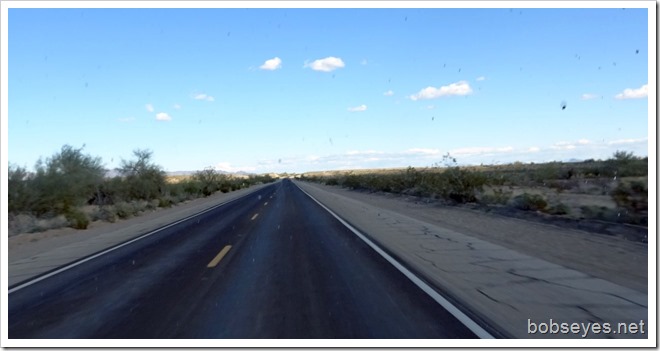 Made it to Quartzsite

I pulled into Quartzsite just about dark and went over to the library to use the internet. But when I got to the library I couldn’t find any open access like there was last year and it was after five so I wasn’t sure if they just turned it off for the night.

A Canadian helps out

A Canadian guy pulled up on his quad and looked like he was connecting to the internet so opened the door an asked him if he could get connected.

Yes he said as he’d gotten the new password earlier which he gave to me so I checked my email.

From there I headed over to Patti and Marty’s. It was real dark  now so I had a bit of trouble finding them but I did.

I found Patti cooking dinner and Marty was where he said he’d be. Flat on his back in bed.

Seems Marty screwed up his back real bad a short time ago and flat on his back is about all he can do right now.

We shot the bull until dinner was ready so I went outside and situated my van in their yard the best I could in the dark.

I’m  always happy to have the driving over with and now I can relax.

(Visited 191 times, 1 visits today)
This entry was posted in Uncategorized and tagged Travel to quartzsite arizona. Bookmark the permalink.

3 Responses to Guerneville To Quartzsite Looking for Adventure