I posted three days worth today at the Quartzsite library. Two days here and the day before on a separate post below this one if you want to read it in sequence. Check Recent Posts in the right column for the latest posts.

I sat around most of the day thinking I’d hike up the side of the hill in front of the van in the afternoon. 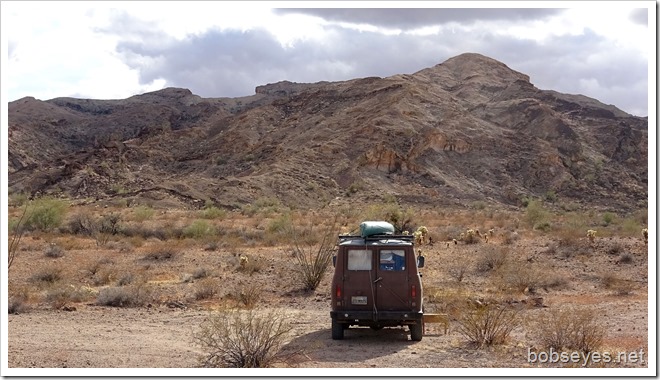 So around 4:30 I headed off in that direction and came across this game trail which I started following and forgot about going up the hill. 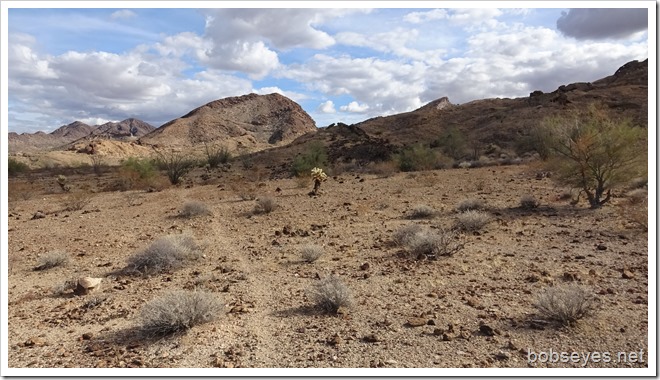 Not far from camp I came across these old Indian grinding holes where they used to grind seeds and nuts and things to eat. They also were to use these for cooking by putting hot rocks in the  holes to cook. They are in the wash that goes by my camp spot. 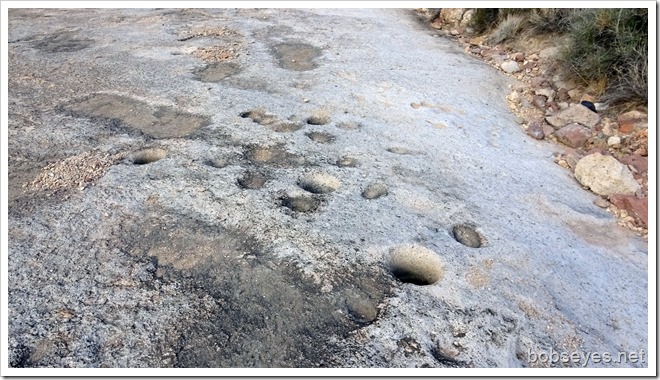 There’s more of the holes up ahead on this exposed rock surface in the dry creek. 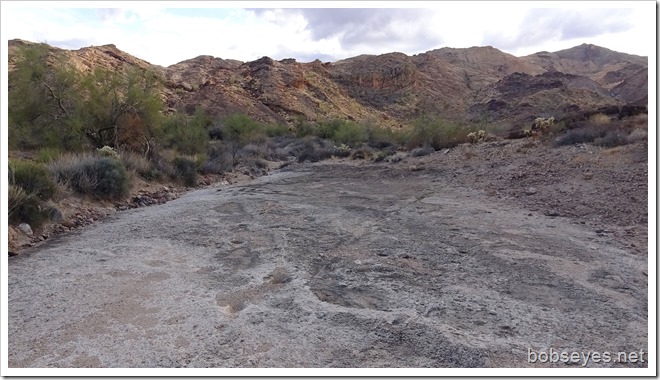 Most people never see these holes. See that truck over there. It’s parked at the cave parking spot just behind it. If you walk to the cave with the holes in it and continue straight another hundred yards or so you will  find another creek with  more holes in it and this spot where I am now is straight off the other two spots, the cave and the holly creek over there.

These holes in the creek, the truck at the parking lot with the cave and the the creek holes behind it. Three sets of holes. There are more holes I’ve seen in places, but these seem to line up below the tanks. 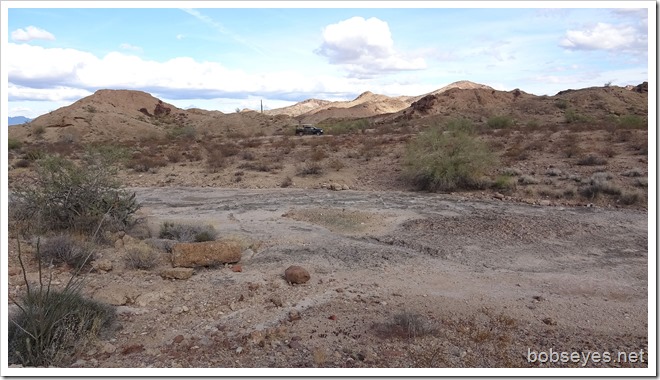 Where did they live

I pondered where the huts might be to live here. Maybe on the creek banks, but more likely over the holes in  the rocks as that is where they will mostly live to cook and eat.  So far I haven’t found any caves where I could say they lived. The source of water would  dictate where they lived. Deferent holes deferent families maybe. Of course maybe the occasional wash out. But most of the time the flat rock where grinding holes are might make a good hut sight. More likely people had huts all over the places over the years. 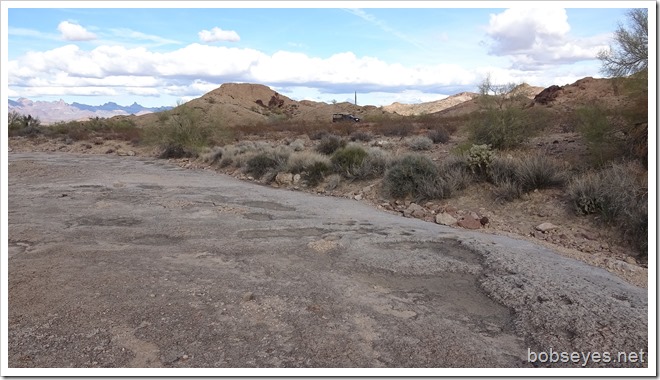 I continued on walking using the game trail as much as possible but it was slowly disappearing and getting hard to follow, but no matter I could see the way. 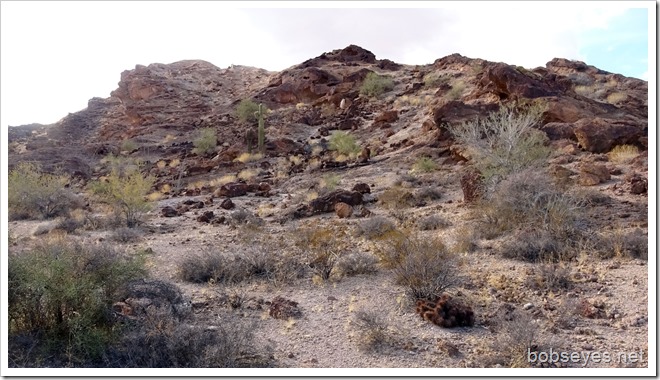 I walked up along here checking out these holes. 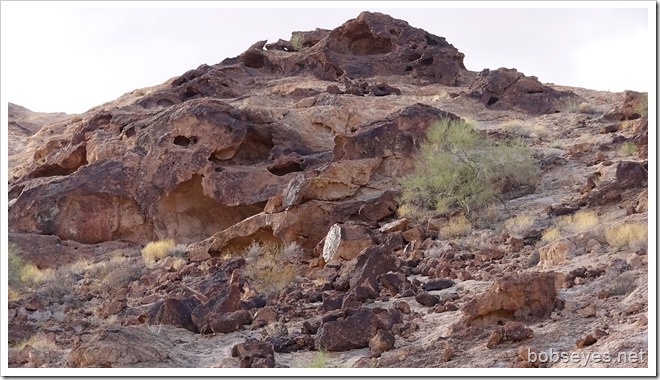 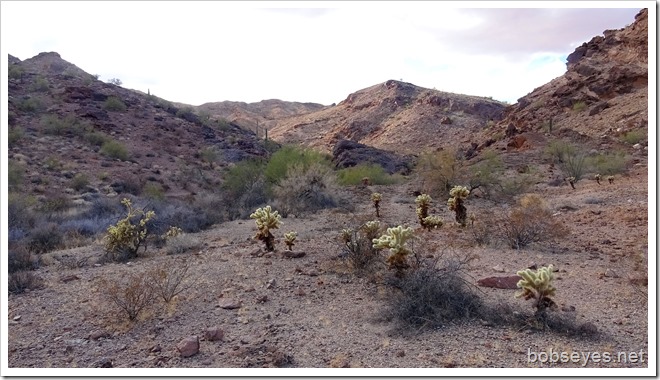 To this spot. A little lookout hut overlooking the Horse tanks below which I soon walked down to after looking around here. 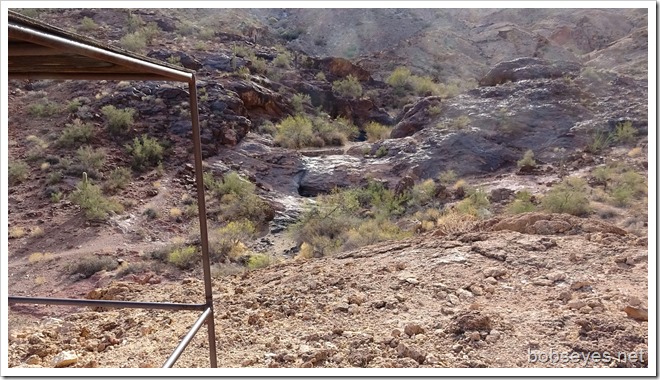 On the way down I went by this cave that I could see by the tracks and the scat that some animals had stood in there likely to get out of some weather.. 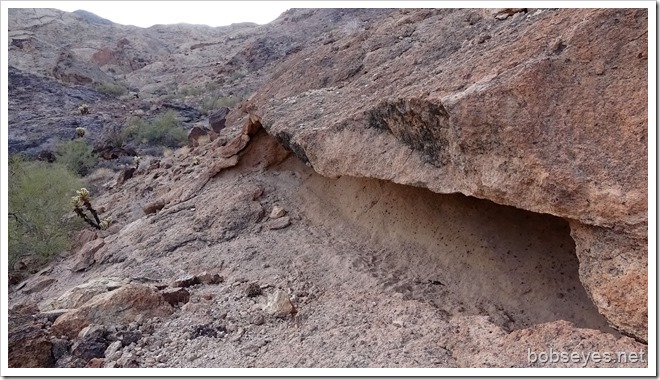 Here is the first horse tank I came to. The water hole is in a creek that only fills when it rains or snows. These are the natural desert tanks that most wild life depends on to survive. 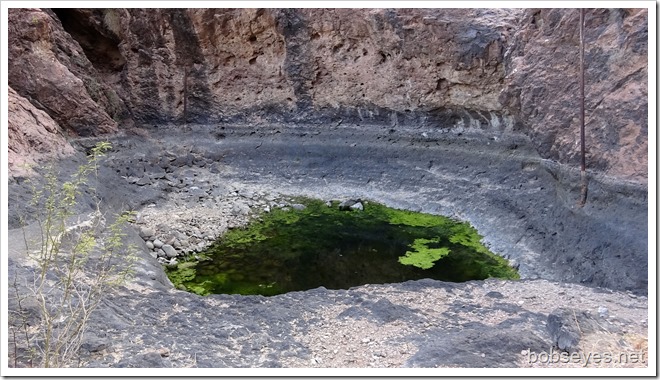 I walked down to the tank to have a look and peered in to see if anything was living there. Some moving surface water had caught my attention. 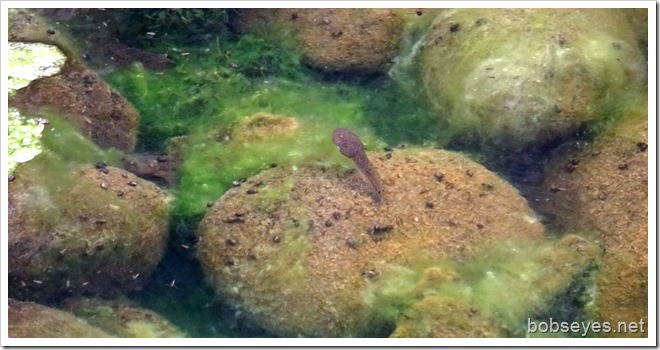 Of course that means frogs too. I saw several frogs and a number of the wogs. Some but not a lot. 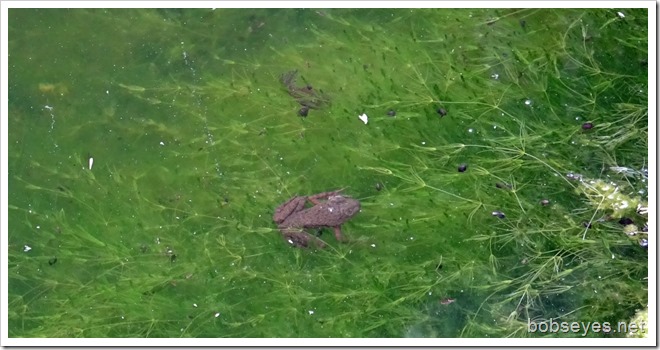 Started on back to camp

I veered off and left the tanks to start back down the other side of the canyon  looking down here where I plan to walk along the rock there in front keeping high. My camp is down at the end of this valley left of center, just out of sight. The road up to the end parking lot comes up here just to my left that’s why I’m staying high on the hill. 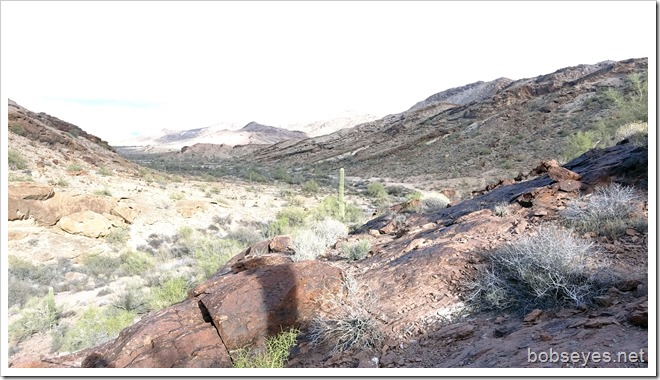 I hiked along here following no trail just nosing around taking my time working my way back to the van. 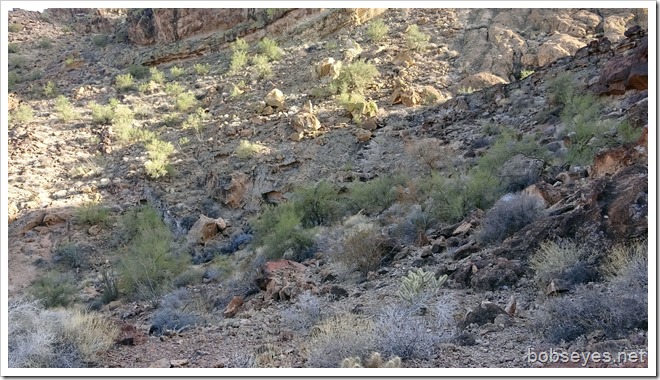 It was getting late in the day but I still had plenty of time and I wasn’t lost which can be helpful. 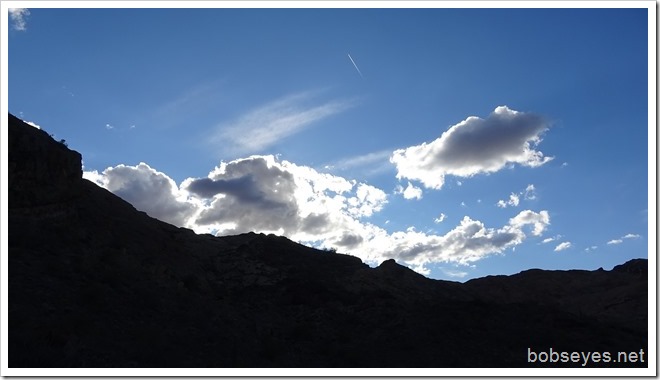 My camp is in sight

As I came off the hill I could see my camp with the van parked down there. I walked down and picked up the game trail that went by my camp. 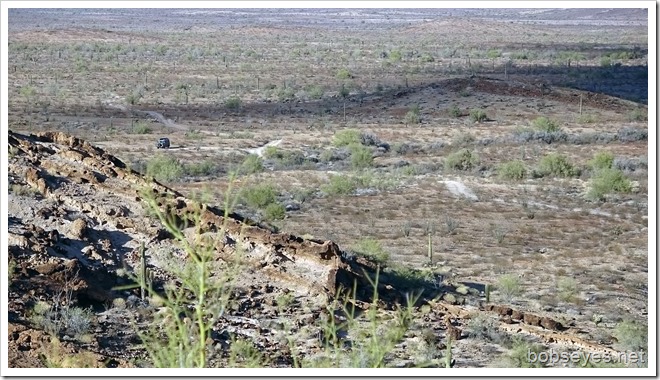 That seemed to tire me out more than I expected so I was pretty beat. I got something to eat and sat around for a bit and went to bed early and that was my day.

Today I was going to take it easy and write some blogs. 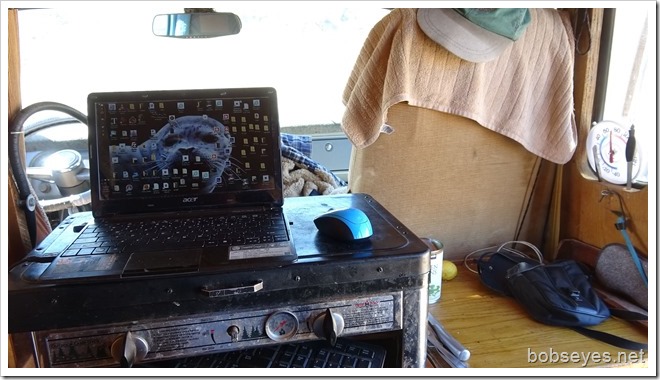 I  mixed some wheat flour and water together to make some yeast for pancakes later.  This will take several days to make yeast from scratch. 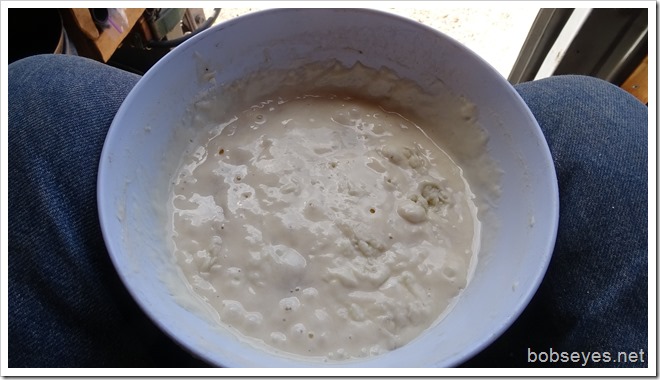 A hill to hike

I was thinking of hiking this hill  which is just outside the van’s side door’s later today. 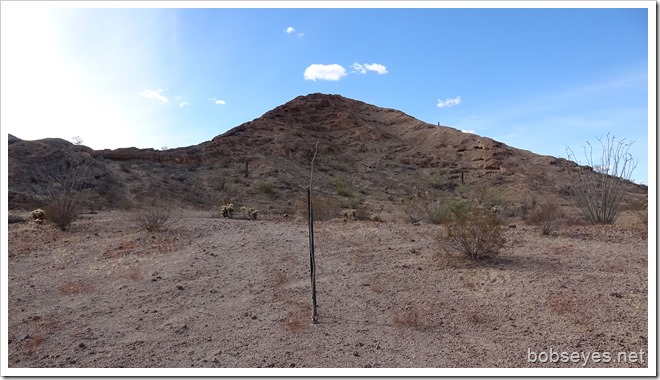 It has lots of holes and caves in it. 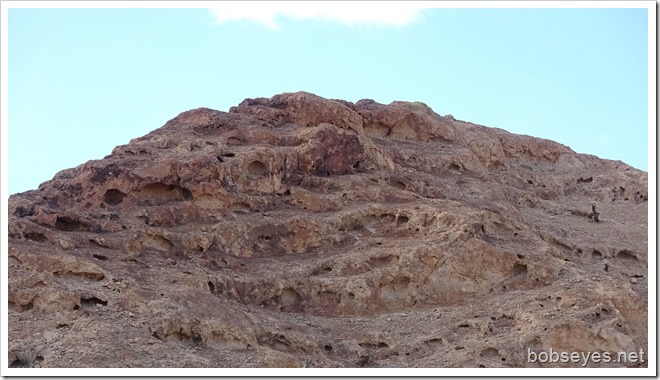 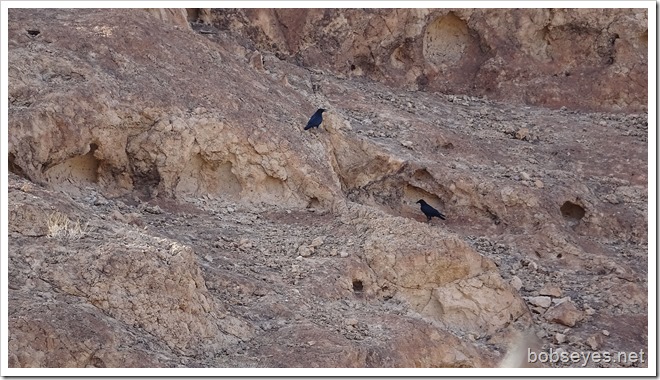 Legs and feet say they are tired out

In the evening I went outside to get ready for a hike up that hill, but my feet and legs said they were tired out, so no walk and some more rest instead. 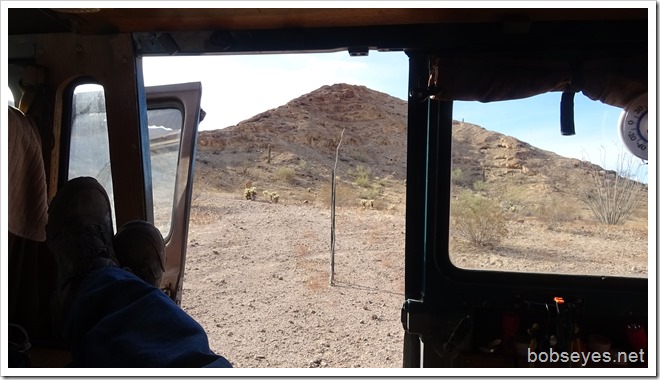 Made thumb crackers instead

I decided to make some more thumb crackers. 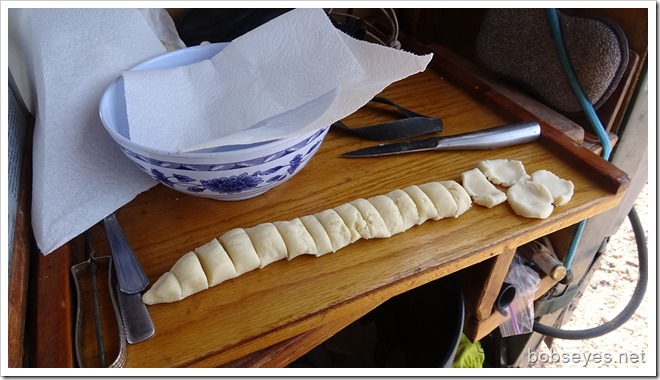 I cooked them in coconut oil in my wok. 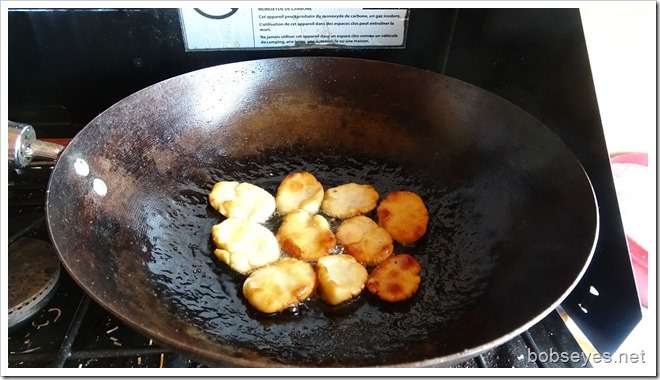 They sure don’t last long. 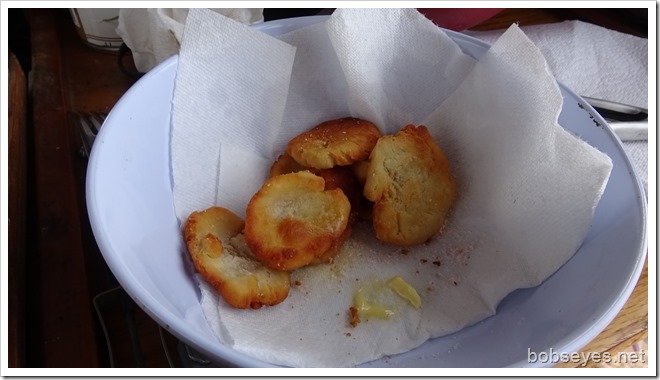 Just before dark this car came up the road crash banging away because it was so low to the ground. It wasn’t’ long before it came back down the road and left for the day, just before it got dark. The girl was throwing rocks off the road, but the car crashed banged just the same. 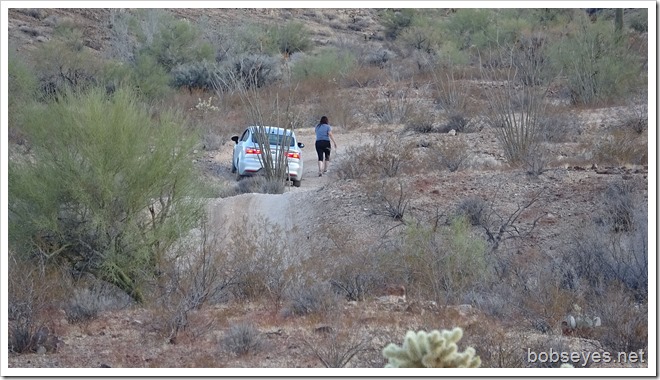 So I had a lazy day with only a few little walks around the van camp area.

Tomorrow I’ll be heading back to Quartzsite to resupply and go on a jeep ride with Patti and Marty on Wednesday.