Green Green Grass and the River Water Is Clearing

Get paddling while I can

Some more rain storms coming in a  couple days so I thought I better go kayaking while I can. The wind was supposed to be down too.

It was overcast when I got to Jenner today and pulled into the parking lot. Only trouble was the boat ramp side of the parking lot had orange cones blocking it off. I stopped my car in front of them and got out as I could see a state maintenance man weed eating by the ramp. As soon as he saw me he waved me to come on through to the boat ramp. Sometimes it’s nice to be a local.

I put my boat in the water to a somewhat overcast day, but the wind was down and the breeze was warm. I headed on up the river about a mile taking my time and enjoying the day.

I stopped by this big redwood log and sat for a spell. 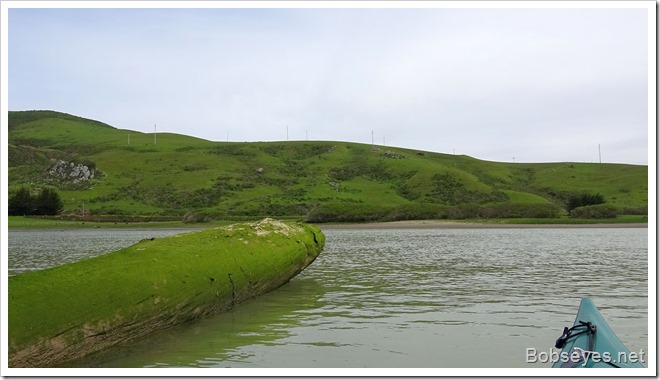 Across the river I could see some cormorants resting on the gravel bar and some cows up on the nicely greened up hills. 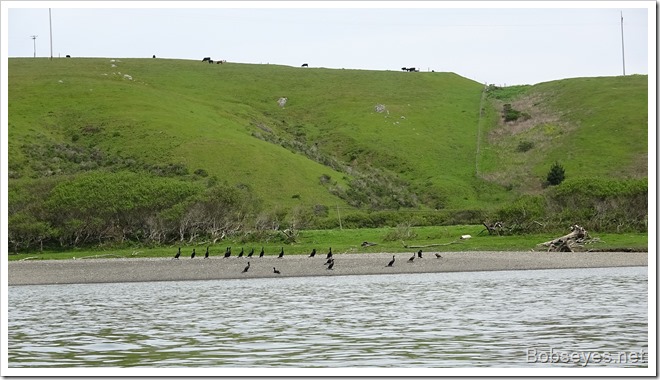 I continued on up  the river to this area just ahead, called Muskrat. 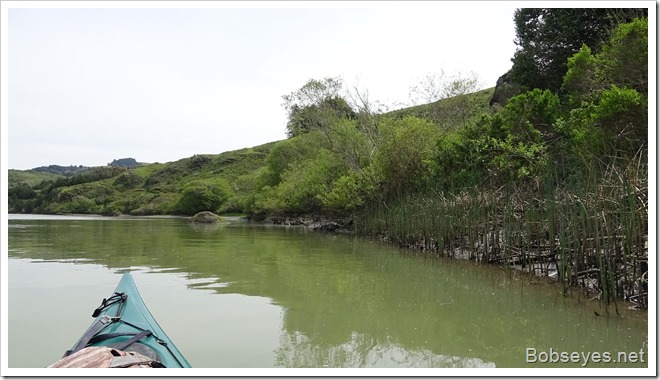 My plan was to put ashore and hike up to Buzzard rock to see if the turkey vultures were nesting there or not.

But it was low tide and there was only mud showing on the shoreline where I needed to get out, here. 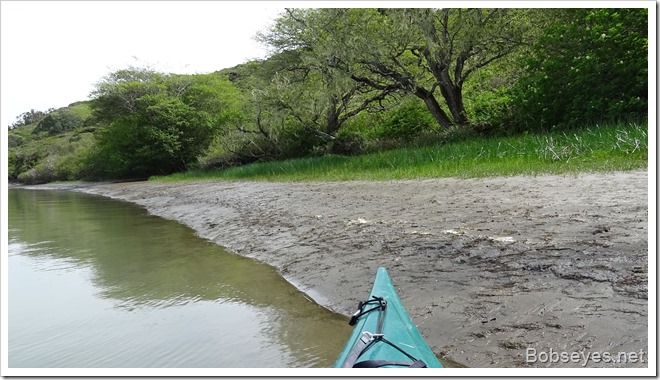 Needless to say, I canceled that plan until the tide is high enough to cover up the mud.

I did sit in the spot in my boat looking back down the river. 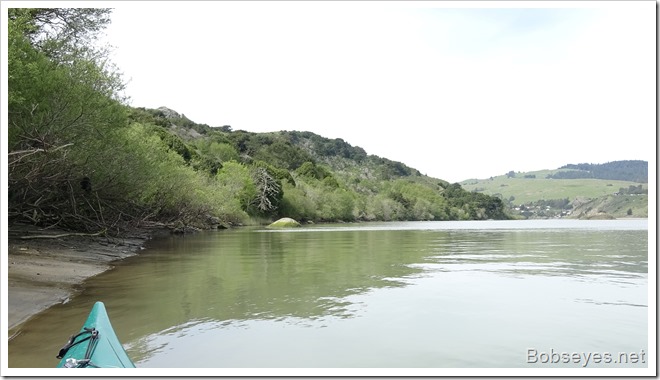 Eventually I crossed over the river to where these cows were up on the hill and headed back down the river in the current, drifting along. 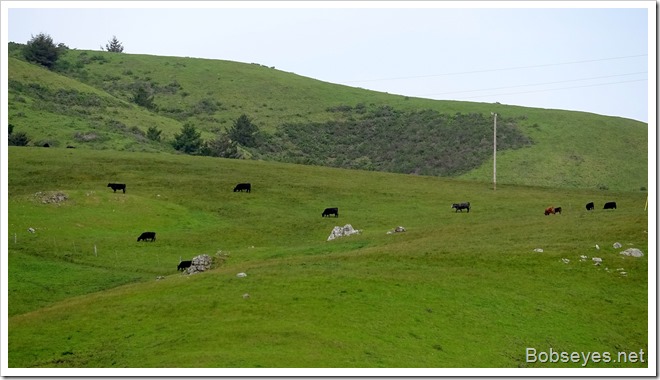 I passed by these cormorants by Paddy’s rock. Most of them flew off, except for these few. 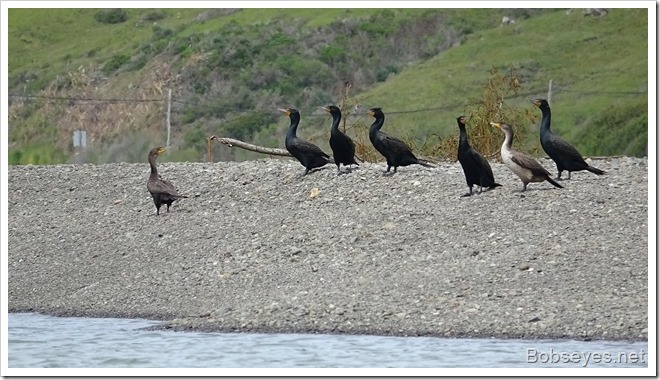 Not enough water in the back channel

I didn’t paddle down the back channel of Penny Island as the water was too low to get through, so I went down the north side headed to the lower end of the channel. I saw an osprey up ahead on the island’s gravel shore and took some pictures and it flew off before I could get close enough for a good picture, but shortly the osprey landed back down even closer so I got this picture. 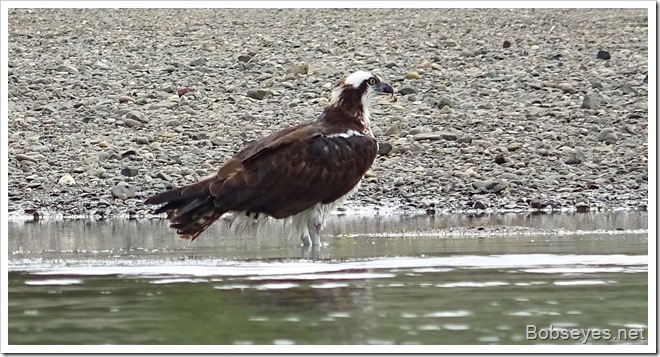 Just past the osprey on the bottom end of the island were some more cormorants resting. 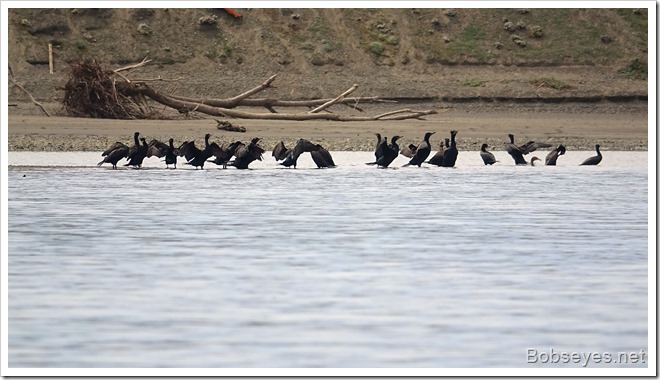 Headed down to the mouth area

I paddled on by them and headed across the river and down to the river’s mouth area. 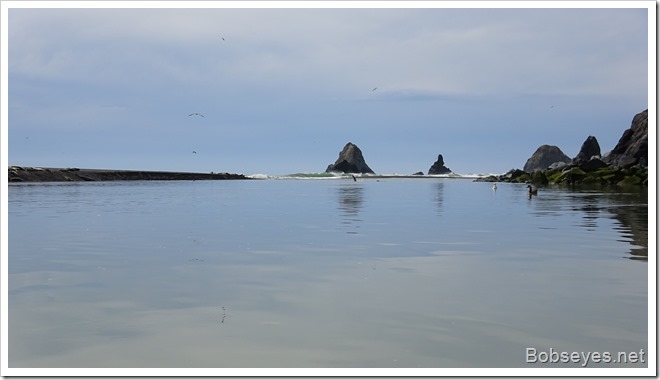 I made it to the open mouth and sat around and enjoyed the day.

Here’s looking out into the ocean through the open mouth. There’s some harbor seals resting there on the sand on the left. 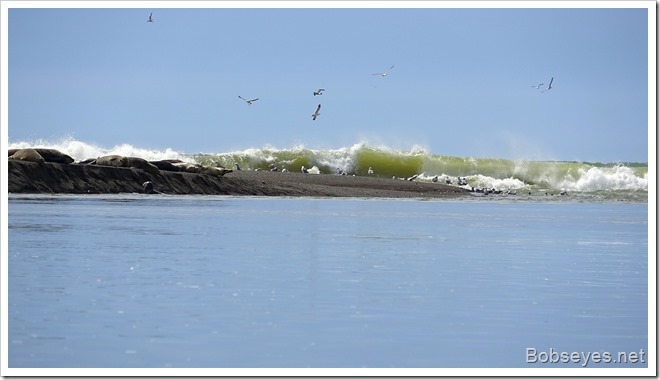 Ken paddled up and we shoot the breeze

I was starting to leave when Ken paddled up in his boat. He came down to see if he could paddle out the mouth into the ocean. He’s knows what he’s doing and has the right clothes on for the job and can roll that thing, which I never do. 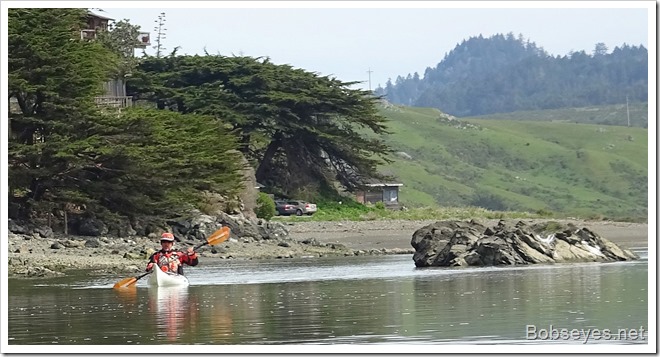 We sat around in our boats and shot the bull for awhile. I saw this tern catch this fish and I was lucky to catch it in flight with it. 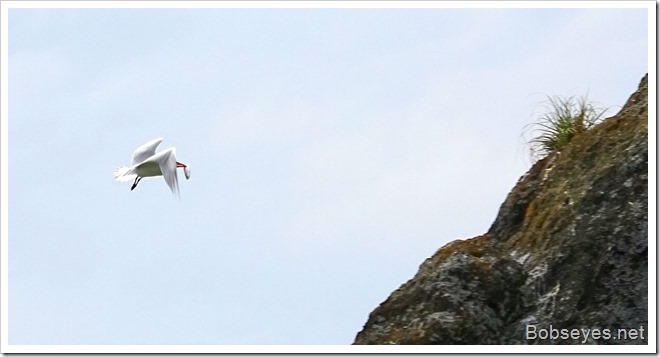 The ocean got rougher as we sat and talked as the tide was changing. Ken noticed that and wasn’t certain he would go out in the ocean now as it’s hard to get back into the open mouth when it gets real rough.

Ken headed out the open mouth to see if he could make it out, or if he even should try and I headed on back towards the boat ramp.

Cormorants are liking the clearer water

Near the boat ramp, I went by these fishing cormorants. The river water is starting to clear up from the winters storms so the cormorants can hunt fish better now that they can see and they are taking advantage of that and starting to hunt more further up the estuary. The clearer water also means birds like the terns and osprey can also start catching fish on the river now, or at least until this next storm might muddy up the river again. 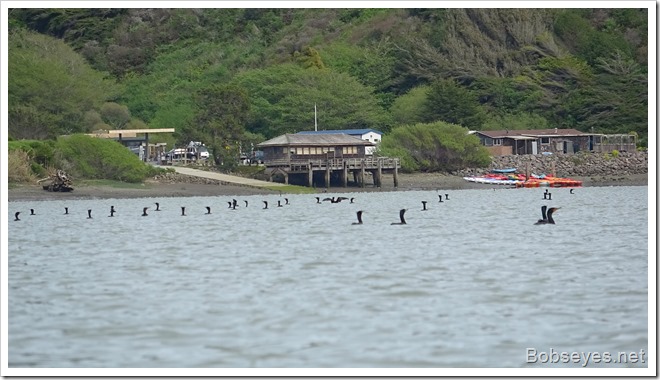 It was just after five as I paddled over to the boat ramp and went on home for the day.

Sat around enjoying the yard

After my usual nap, I went outside to sit around and enjoy the nice day. I didn’t have anything pressing I had to do, so I mostly took it easy until it started to get dark.