That big storm came in last night and boy did it rain and it’s still raining.

My brother’s for apricot trees

I first was headed to Healdsburg to pick up three small apricot trees from  my brother Mike who had started them from seed.

I was going to go the back roads way and stay off the freeway so I took Eastside road which I thought would be high enough not to be effected from high water. I travelled a few miles down the road when I came to a flooded road closed sign so I turned around and headed back and hit the road to the freeway.

It’s raining harder than it looks going up the freeway. 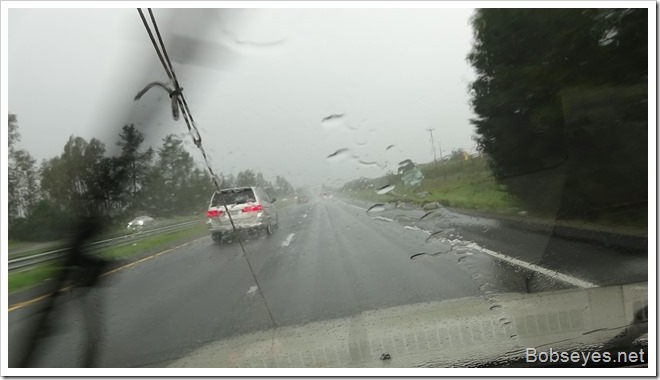 It was raining even harder as I approached my brother’s house. He grows citrus trees for their fruit so I was hoping to get some of those too along with the apricot trees.

This was my view as I turned into his driveway raining hard. 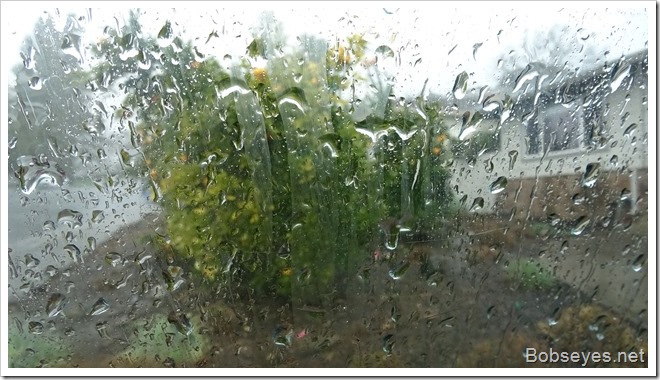 Rounding up the trees

We had to go out into the rain and round up the three apricot trees and it was a a bit muddy. They barely fit into the car and I broke a lot of branches getting them in there but they’ll grow back. I need to get them planted in the next couple of days before I leave on my trip.

My brother offered me some oranges and lemons so I got some of each.

I still had a long time until my afternoon dentist appointment so I went to Santa Rosa to a Chinese market and bought a bunch of instant noodles for my trip.

It was still too early so I went to a large grocery store and did some more shopping for my trip.

After that I headed to Forestville where my Dentist works. I was still an hour and a half early so I pulled into the cemetery there to have a snooze until it was time for my appointment.

I snoozed here along with all the other people here. Of course they all snoozed much better than I. 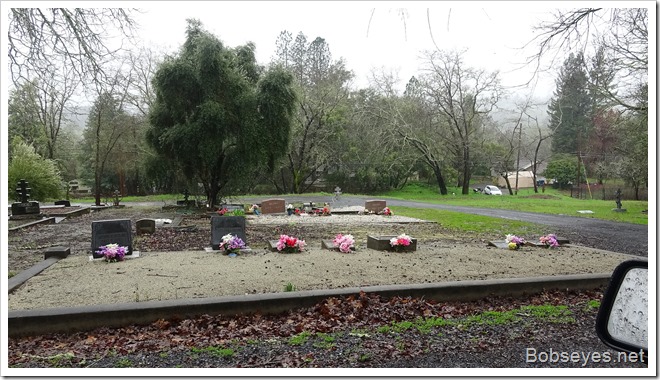 I left there when I had about a half hour to go for my appointment and headed to the dentist office.

Bad news at the dentist

I was hoping to just get an adjustment on  my last crown we did, but no, she had to find another bad tooth that would also need a crown replaced. I scheduled an appointment when I get back from my trip to Arizona.

I thought about getting this done in Mexico while I was down that way, but I don’t have papers to cross the border so that’s out.

It was still raining hard as I drove on home for the day.

Sounds like the area is going to get some flooding

I was hoping to maybe go for a yak tomorrow as the rain was supposed to let up a bit, but I hear it will likely flood around Guerneville tomorrow so if I was to go I’d only have to drive down the road about a mile to put in so the yakking is likely not going to happen.

That was it for me today. I stayed fairly dry most of the time.