Figuring out the old van wires

I started out the day with intensions of working on the van wiring. I called my friend Marty about a few questions on it as he has an old van like mine. He said he had a good van wiring diagram just for our year vans so he said he’d try and take a picture and email it to me which he did and it’s very helpful compared to what I had.

So after that I went outside and realized I’d planned to go up and visit the hermit today as I was also sorta interested in what the chopper people where doing up in the forest fire rehab work area so I decided to go on up there as I’d planned.

The park is closed and they have a guard on the gate as the chopper is flying overhead with debris about every five minutes so one has to wait to move between loads. I shot the bull with the guy until it was time to  move. He said I’d have to follow a pilot car going up the hill when I got to the hill road. 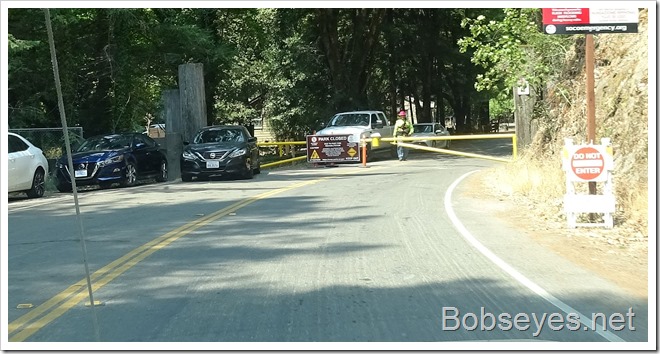 A break from the noise soon

I entered the big trees and drove on in and ran into another road guard just past here which I didn’t have to wait long at, but I did have some time to chat with her. Seems this is the last day of the chopper for a couple weeks which was good as everyone around here needs a break for it’s noise. 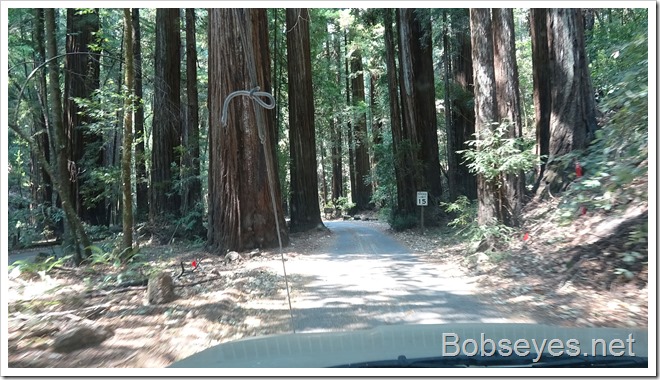 Wait for the pilot truck

I made it through the park to the hill road I needed to take where the guard informed me I’d have to wait until the pilot car could come down which was about a half hour or so, so I shot the bull with him and the other two rigs that pulled up behind me. 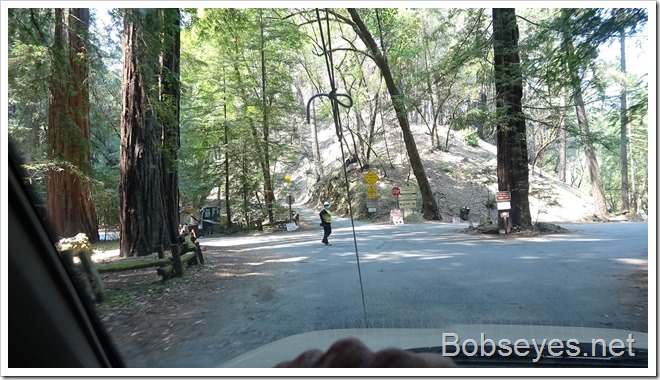 Waiting for the pilot rig here. 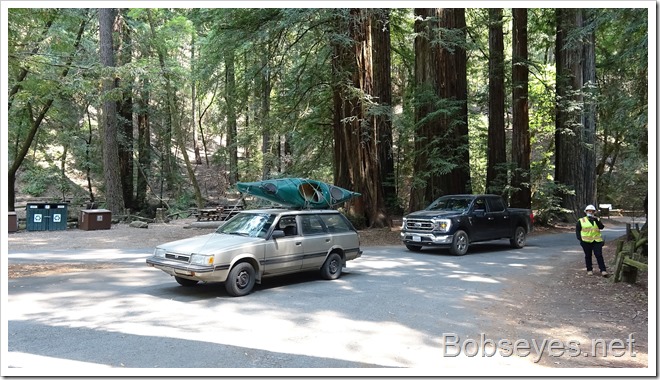 So he finally shows up and decides I can go up the hill without the pilot rig and the other two guys would have to follow him on up. 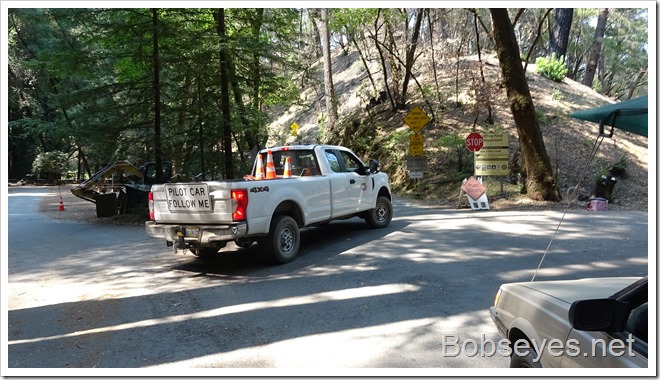 There was another guy at the hermit’s road turn off and I had to wait a short time for the chopper to go by and I drove on over towards the hermit’s house with one more guard at his house entrance. 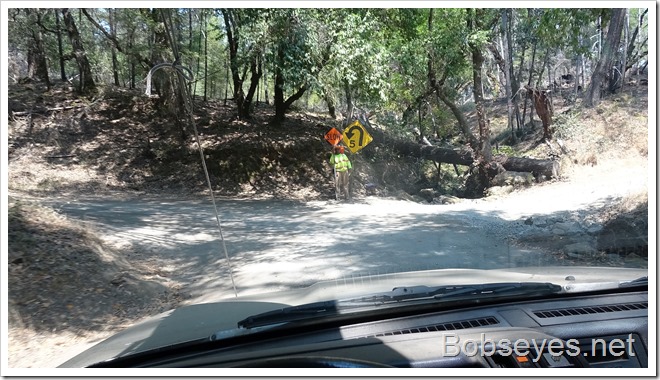 Humm, some new fencing here, rehab work maybe? This is the hermit’s driveway up to his house. 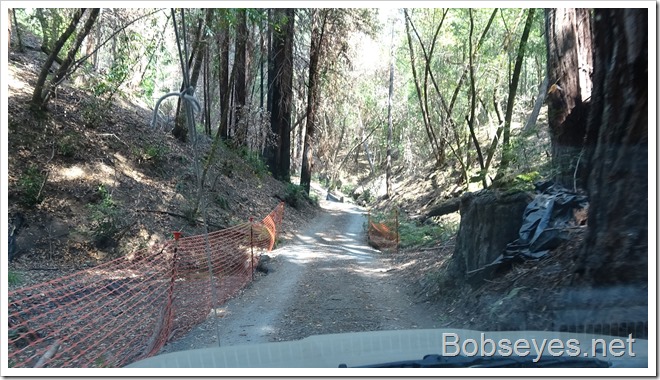 I parked here and could see there was some rehab work being done up behind me. 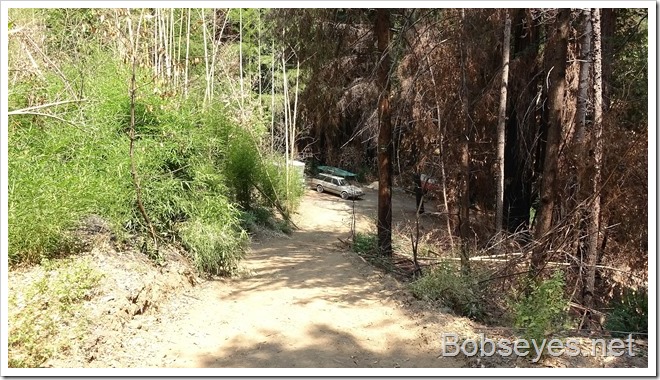 One of the hermit’s houses had burned down in the recent forest fire so the government paid to have the place all cleaned up to get rid of any hazardous materials. The house was here and was not being used before the fire. 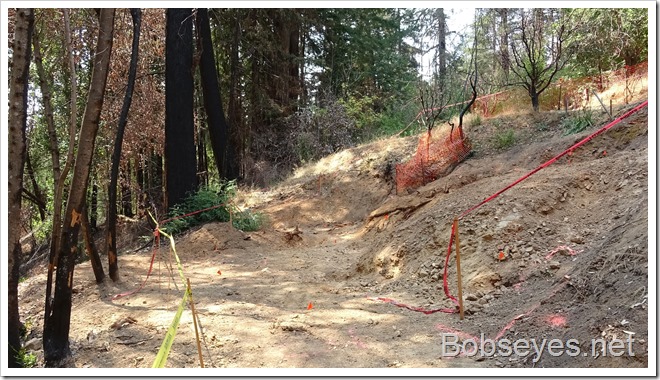 While I was looking at the rehab work the hermit called out so I headed over to where he was. I found him down below his house feeding the wild birds seed. 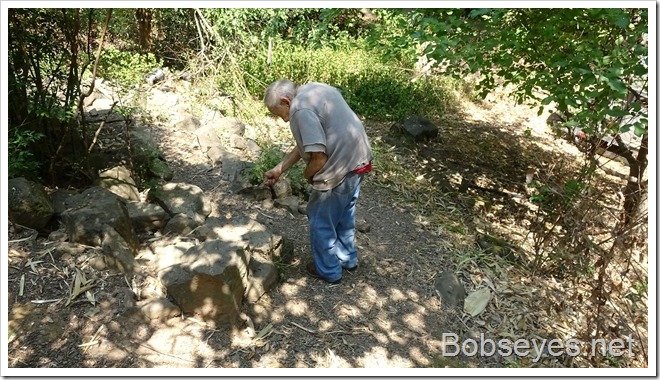 It took quite some time for him to get back to his house. We sat here for some time and shot the bull catching up on what all’s been going on. 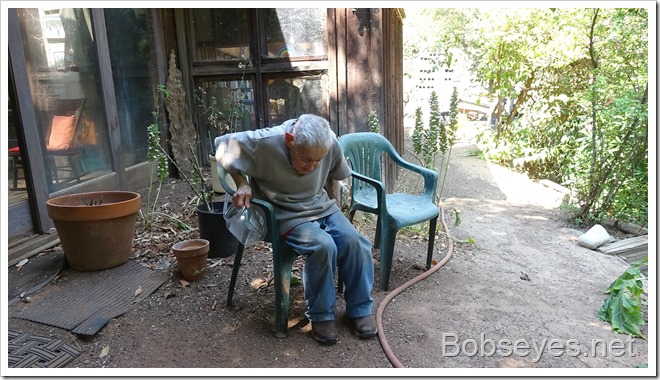 Learn how to check your body for hydration

We got on the subject of water hydration so I asked if he knew how to see if he was hydrated or not as it’s a very important thing for older people to know or anyone for that matter.

When you go to the doc, he may pick up your hand and look at it, then he will do what you do to check hydration. He takes his thumb and forefinger and pinches the sky on the back of your hand as much skin as he can pinch and pulls this skin up into the air as far as he can.

Then he releases the skin and watches what it does. It the skin instantly goes back down to less then an eight inch you are likely hydrated ok.

This simple test can be used if you get tired out or are not feeling well, chick your hydration as it might be what’s causing it. If you are sick or doing any kind of fasting this is also a very important thing to know and use to stay hydrated.

Basically check it often enough to start to find out what your normal is now and you can use this to stay safe and healthy.

Unfortunately  most docs don’t tell you what they are dong when they do this to your hand but they surely should as it’s just too important not to know and also if you need to know if someone else is dehydrated.

Eventually I noticed his eyes drooping so knew he needed a nap. But I got onto a couple other subjects after I said it was time to leave and we made about another half hour of shooting the bull and had a good chat too.

When I headed back down in my car the first guard told me the chopper was out to refuel but before I could take off we could hear him coming back so they let me drive a section to the next guard while he was loading. Here’s my last road guard and I waited two chopper loads before she let me go to the main gate. 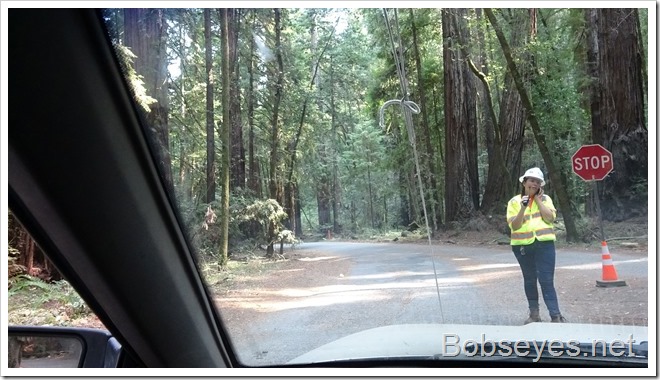 Almost to the main gate I drove by the chopper debris area where the guys were  moving the stuff to a pile to be hauled a long ways away by dump trucks, a three or four hour drive to where they have to take it. So the dump trucks come in in the morning and load up and are gone delivering it the rest of the day. 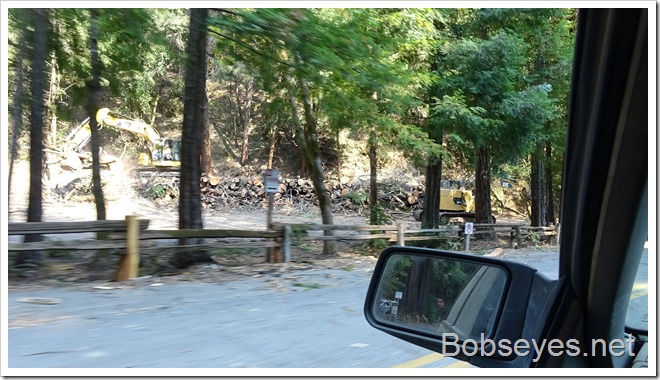 Back at the main gate

At the main gate the lady guard opened the gate for me and was the same lady I talked with the other day when  I came up on the quad runner so I had a good chat with her. I mainly stopped here to take a photo of the parks name. 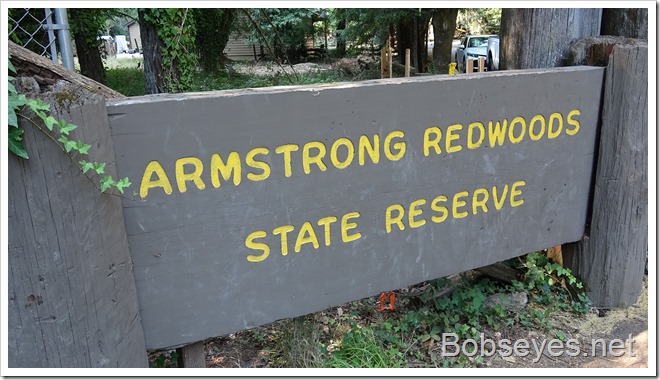 The reason I wanted to see the name as it’s changed since it was first named. It used to be called Armstrong woods state park or something like that before they made the park a reserve and changed the name.

Now why do I want to know. Well Barb in the comments section said she thought the history of the park and our family property might be of interest and it is. All of Guerneville’s early history is interesting.

So I thought it might be a good idea to write a blog on the subject  which I’m doing and will post it as a separate blog when I get it done as it’s pretty long.