We finally got some cell service.

I’ve been wanting to get this done for some time now and the reason we came this far east was to get it done.

It all started when I found this well crafted arrowhead on a gopher mount by a beaver pond in the 1970’s near where I am now. It was the first arrowhead I’d ever found and it was an excellent one at that. 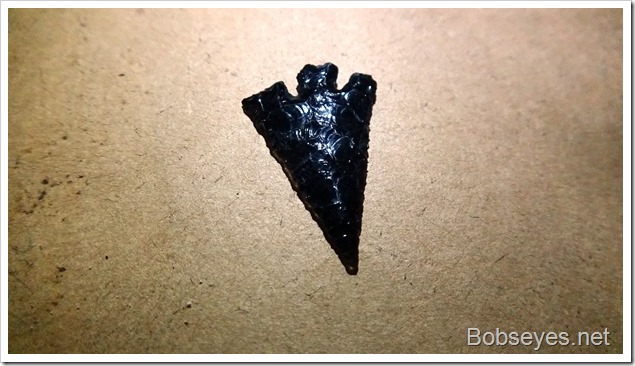 And then through the years I’ve hiked down into big gorges where the enchants lived and the old Indian spirits eventually got me.

I also found a few other arrowheads and this scrapper tool that was also very well made and in excellent shape. 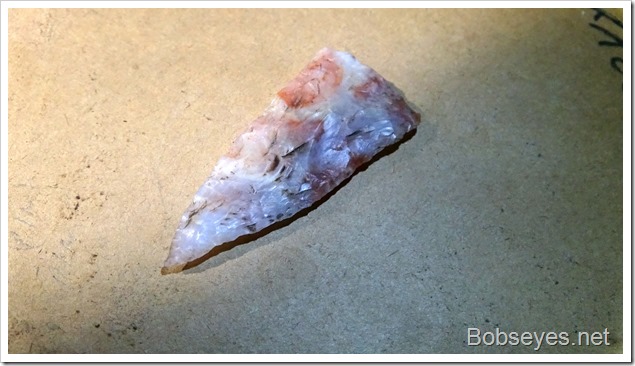 We headed over to his place around 11 this morning but it at first appeared that no one was home except their two little dogs.

I decided I’d just have to write a note and leave what I had on the door step and started hunting up some writing materials when a guy came out of the house.

It turned out Joe wasn’t around but this was his son Irwin that I’d met before.

At first I explained what I wanted to to and could he tell Joe, but soon realized this is even better giving the stuff to Joe’s descendant, where some of it rightly belonged anyway. At least that was my thinking.

I gave him all the old arrowhead stuff and told him to do whatever he wanted with it, as I’ve gotten all the enjoyment out of it all these years and wanted to pass it on as they were of no use to me anymore.

Then I got out my bag of silver and showed him the silver arrowhead castings I’d made, earrings, pins and just loose arrowheads.

I asked him to give a set to his mom and any of his sisters he had, especially young ones that the Mom would have to save the set until she was old enough for them. Then I said just spread this stuff around and give it to anyone that he thought deserved it and would appreciate it.

I gave him about twenty pairs of earrings and 20 or so arrowhead pins and about 50 silver arrowheads with a few bronze ones mixed in too. The stuff was worth quite a lot of money but what I was doing with them was worth even more. 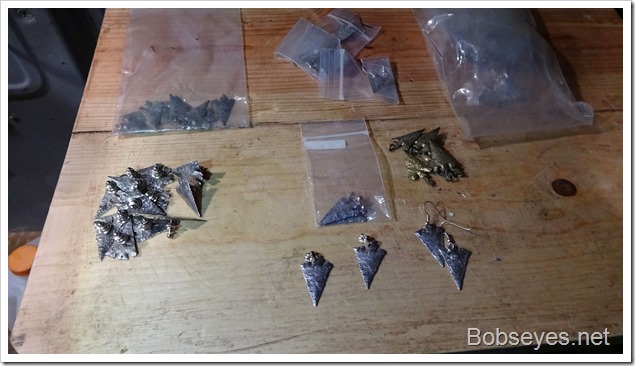 Close up of some of the earrings. 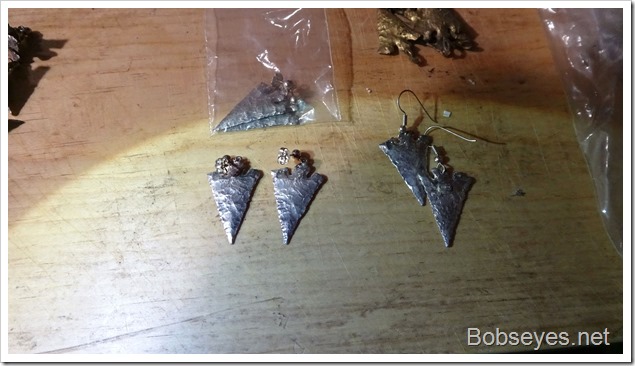 It would be interesting to hear all the stories these will likely generate in this area.

I planted an arrowhead in a guys hole where he was looking for gold and I was amazed what that one little arrowhead generated  and the stories I heard about what happened to it.

Anyway, since the original arrowhead came from this area, I thought all this stuff belonged with this tribe. And by the way, all the years I’ve come into this area, all the Indians have been real friendly and all smiles.

Our water supply was getting low and we would need some in a few days so I asked Irwin if his water was any good. Yes, it was, from a deep source so he let us fill up with water.

Here’s Irwin explaining to Marty what he needs to do to fix a problem he’s been having with his van’s fuel injection unit. They got along real well. Irwin was likely the best mechanic around here as he had about a hundred wrecked rigs around his house and put the parts together for his transportation. 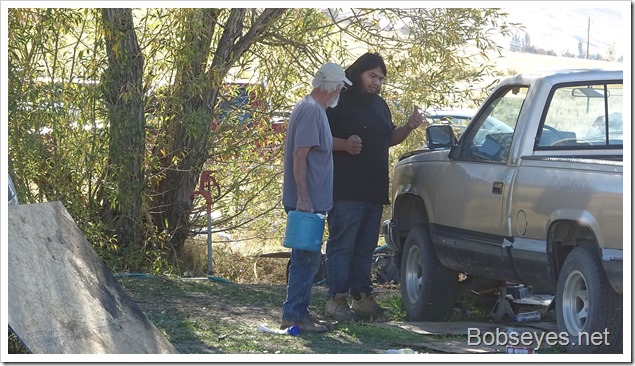 I was happy to get that done and I think Irwin was an even better choice to give the stuff to then his Dad. :O)

And now I have a good place to get water when I’m in the area.

We need to start working our way back west and have plans to cut through a real rugged area for about a hundred miles I came through there about 40 years ago, but don’t remember which way I went.

We drove north on highway 51 from the Duck Valley Indian Reservation about 12 miles to our turn off road at Riddle, onto Battle Creek Rd.

The Riddle Ranch was a couple miles down that road . It’s a rather large ranch. We drove 33 miles across it today to get to it’s far corner at a stone cabin. 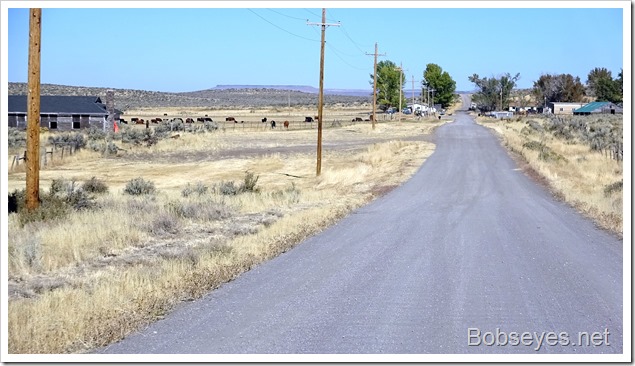 Just past the ranch we got in the middle of the ranch cowboys and cowgirls rounding up some cattle. I asked a lady about the road ahead and she said if we had time to wait a bit until they got the cows across the road, she’d have one of the cowboys that knew the road talk with us. 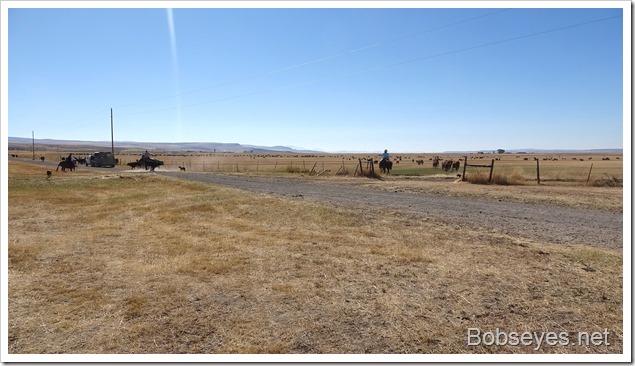 They roped a calf and did something to it before they had time to talk. We weren’t in any hurry today so we waited. 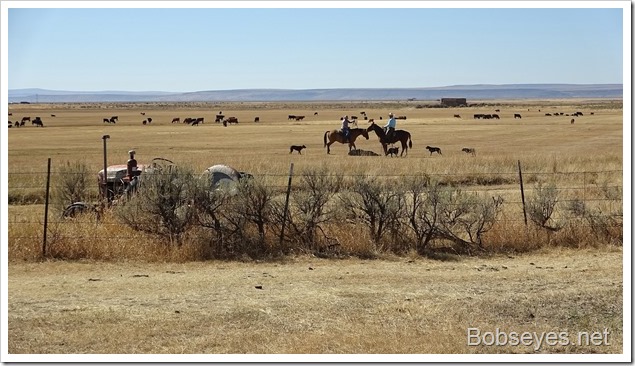 The lady and a cowboy rode on over and we chatted and had a good bull session before taking off. Real nice people.

We headed on down the road which was in fairly good shape on this part. 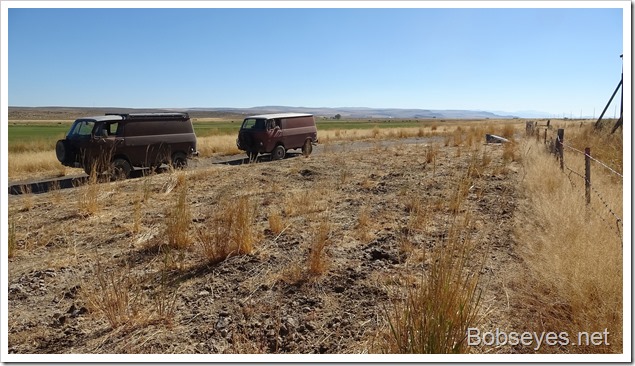 We passed a  couple of pickups on the road which where Indian ranch hands and always stopped to ask what they knew about the road we were taking. No one really knew that much as they didn’t have reason to go as far as we were going.

We were stopped here when this guy and a Indian lady drove up because they saw us. The guy was really friendly and know a bit about the area. I watched his Indian wife hunting around the road for rocks with a knife while we chatted. He said she likes to find heart shaped rocks. 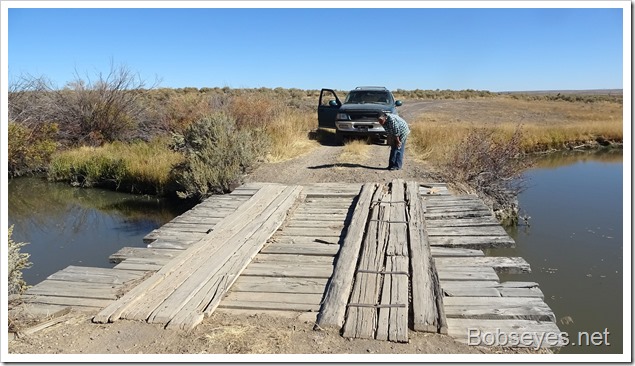 That gave me an idea. I still had a couple pairs of those arrowhead earrings so I asked if her ears where pearsed. Yes, multiple times , so I gave her a set explaining a bit about them and that I’d just given the tribe a bunch of them. She knew Irwin too.

She was delighted and said she’d wear them down to the local bar tonight and show them off. I said good, you’ll be the first and she was real happy about that. Like I said, you just never know just what stories these things will generate.

So, really, we spent a good deal of the day visiting with a lot of real nice people.

Heading out that road to some real boonies

We headed out that road, stopping often to open and close the wire gates that control the cattle.

Some of the road was nice and smooth and easy going. 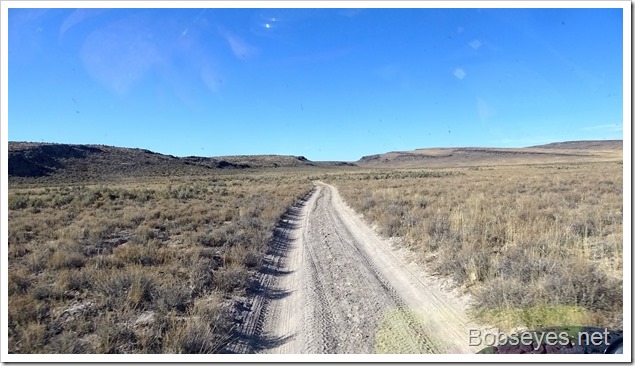 Occasionally we drive by some water sources which were mostly for the cattle up here and of course the wild animals too. We did spook some antelope along the way but they were too fast to get a picture. 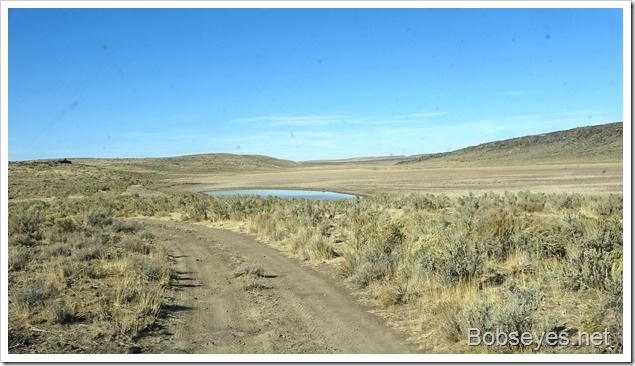 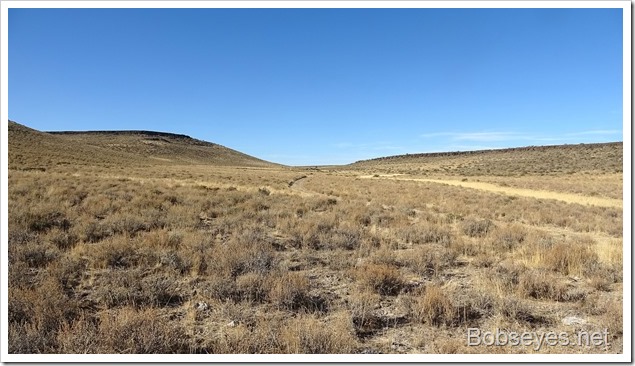 Further out we began to hit some rough parts of the road with lots of rocks to bounce over. Very slow going. Lowest gears, idling, and bouncy, bounce. 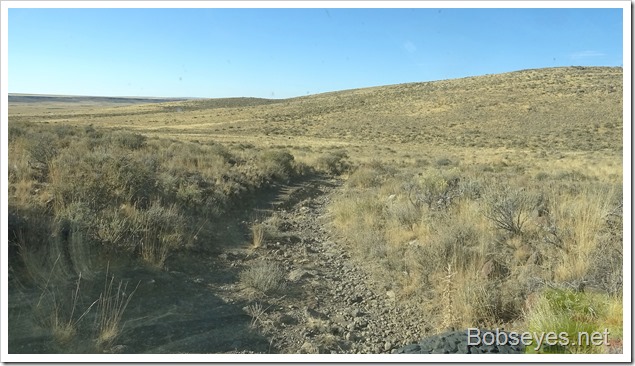 It was after 3 and we were looking for a camp spot when we came up on this stone cabin with a spring by it with cattle. Marty remembered that the cowboy said this stone cabin was at the far corner of their ranch and we traveled about 33 miles to get to it. 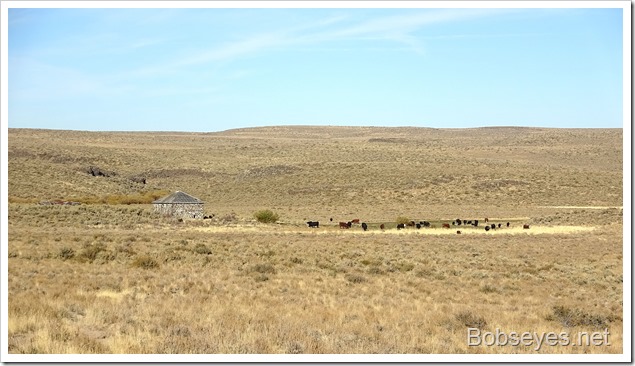 We had stopped to have a look across at this place and it was very nice and peaceful. When all of a sudden there was a very big explosion abut a quarter mile from us. We both  jumped into the air about ten feet. At first there was no reason for that huge big bang, but then we heard a military jet but never saw it. Broke the sound barrier right over us.

The cabin was very well built in it’s time and we checked it out before making camp just past it. 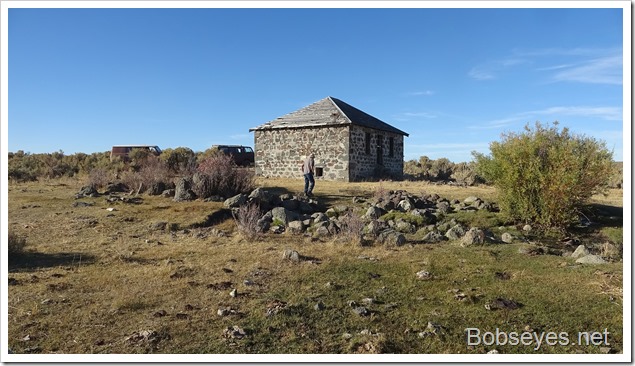 We found a spot to pull off the road, just in case someone might drive by, not likely. 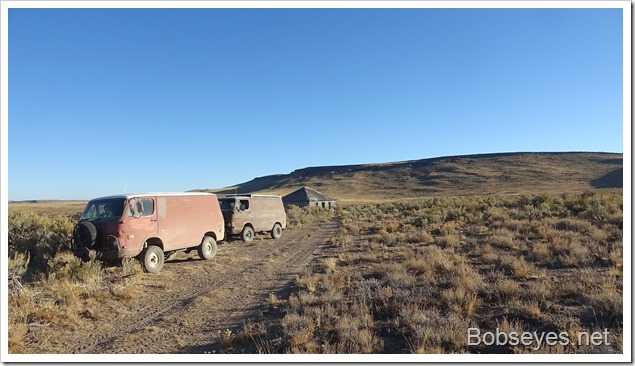 We throw our chairs out and camp is made and we sat and enjoyed the day and discussed today’s happenings and what might be down the road tomorrow. 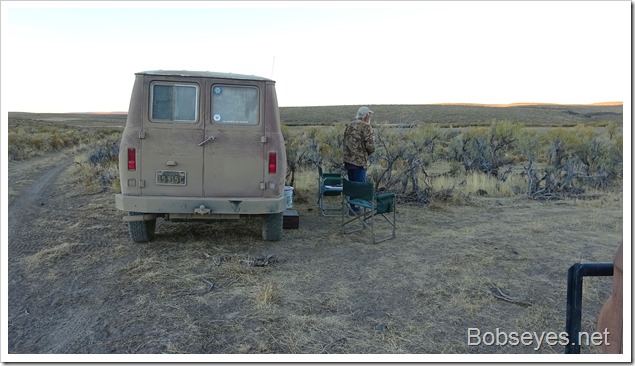 Pleased with the day

I was very pleased how the day went with my stuff and Marty and I just love this road, even with it’s rough spots. The GPS says we have another hundred miles of it before popping out on the other side. Great stuff.