Today I wanted to get a battery into my old 1968 Toyota Land Cruiser that has been sitting around for a number of years not being used and falling apart. What I wanted to know is would the engine turn over or was it frozen up from sitting too long. The outcome of that test would determine what I do next, so it was important to check this out.

This rig has memories

I’ve had this vehicle since 1968 and been a lot of places with it through the years and it has a lot of memories. It’s been around the western mountains and a lot of deserts in the west including Death Valley and to Baja and we did the Rubicon one time too. I almost sold it once but came to my senses and decided it could die with  me. It’s a good vehicle so I need to get it going before it falls apart any more.

I’ve had this project on the to-do list for a couple years now, but other projects have kept me from getting to this one. 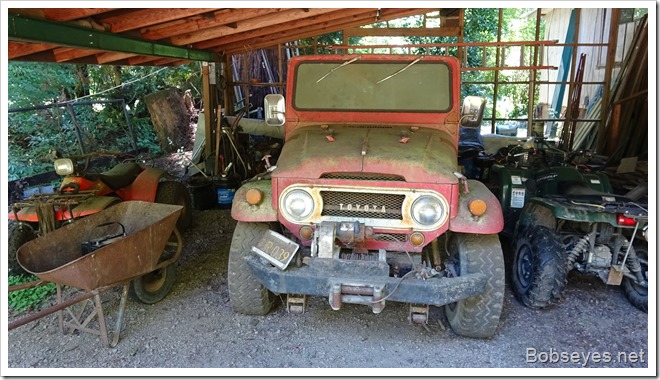 As you can see things are mostly a mess, but it will all clean up with some elbow grease. That’s a messy Chevy 327 V8 engine. 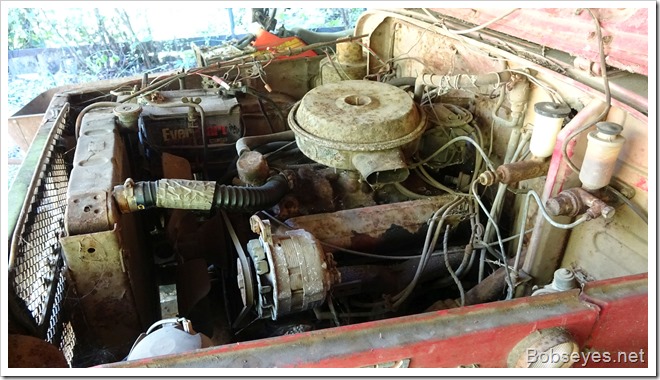 Out with the old

The old battery was pretty shot, so I removed it. 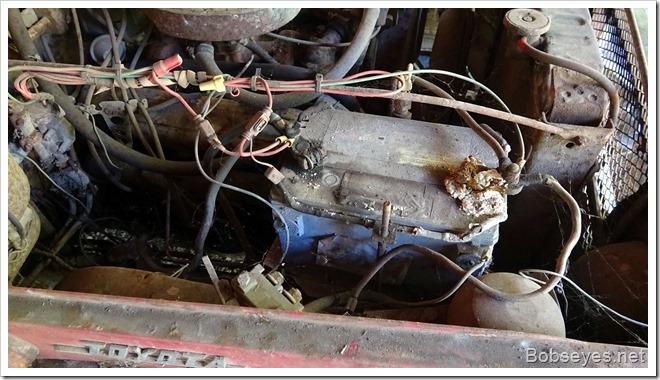 I was going to go up the hill and get the battery out of the bull dozer for the test, but my brother Tom said he had one I could use on a table over at his house so that meant I didn’t have to go up to the dozer, remove the battery and come back to try it out, which saved a lot of time and got the process all going sooner.

I hooked the battery up and tried the start button and it turned over just fine. Step one done, now I needed to get it over by my garage to work  on it. We tried my brother’s quad there, but it was too light to move it, so he got his trunk over and pulled me over by where I needed it. We tried to push it by hand the last distance, but didn’t quite get it as far as I wanted when we hit a little hill in the drive.

Later I was thinking about how I’m going to move it the last ten feet without a lot of trouble and realized I could just put it in gear and use the key to turn the starter and move it to this spot. That worked. 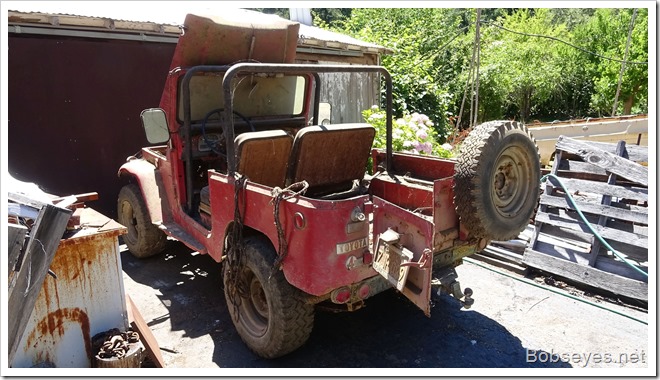 Eventually I’ll get a tarp over it so things will be out of the sun as I expect this to take some time.

Started to clean up a bit

I got the hose out and washed it down, but really need a pressure washer to do the job right. My brother has one of those too, but.

While I was thinking about that my brother’s truck also needed some attention. Seems he has a noise coming from this tire area. Sounds like metal scraping, so we had jacked it up to have a look. I found the wheel could be moved from side to side a tiny bit and thought the bearings was too loose, so I took it apart, but that wasn’t it,  no sir it wasn’t. 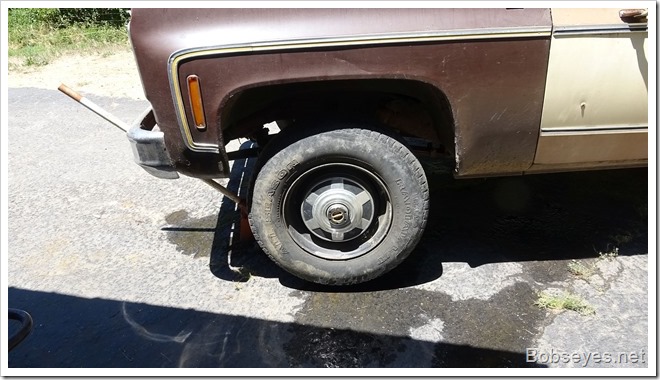 I took the hub apart and undid the axle nuts but the wheel wasn’t loose as I had thought. 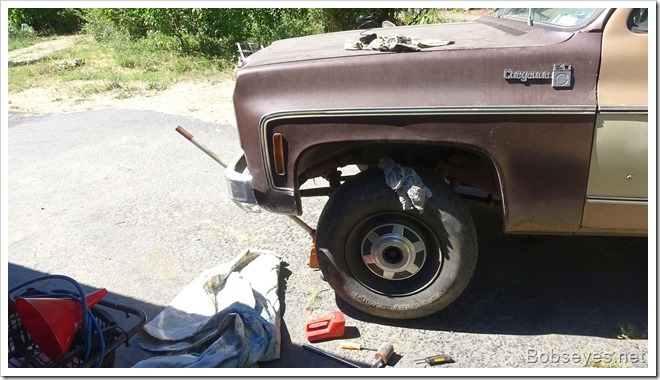 It has to be something

If it wasn’t that, it had to be something so I got my blanket to lay on and started looking around a bit and found this, unfortunately.

It’s an axle u-joint that is missing a bearing cap which the mechanic that installed this for him may have forgot to put that together properly? I don’t’ believe my brother has used the four wheel drive part since the repair as if he did, the end of the u-joint would have been buggered as it was laying against that bolt on the bottom when I found it, which means the axle could not have turned without locking up the tire.

Here’s the axle u-joint with the missing bearing end cap. 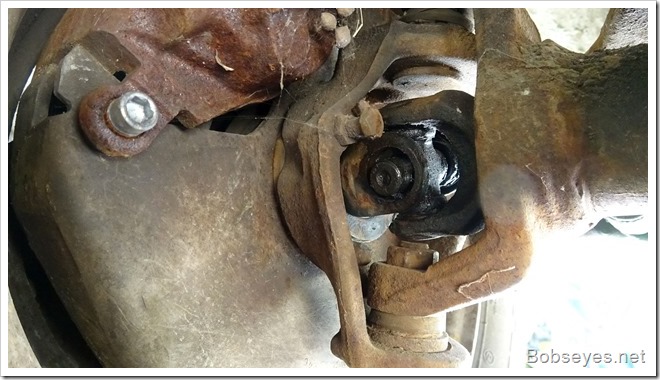 Here’s the u-joint a little closer, no end cap, but the joint is not beat up at least so I may be able to  buy another u-joint to get a new end cap and repair this. The end caps seem to be pressed on with no keeper in these u-joints. 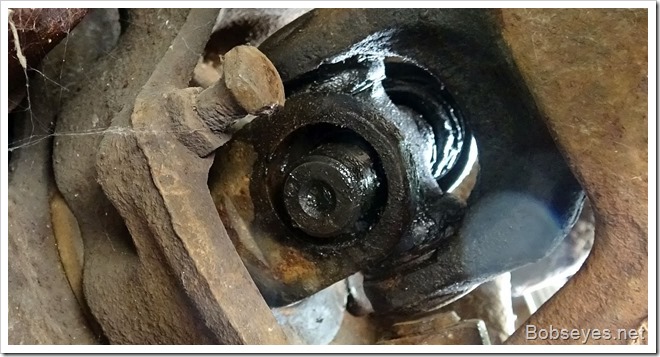 I set that job aside for now, but I did put the hub parts back together.

And the pressure washer doesn’t work either

After a break, I went over to my brother’s house to get his pressure washer. He indicated it wasn’t working last time he used it. I set it up and hooked the water to it. It started right up, but every time I would reeve it up it would die. I could start it again, but it would die again.

I got some tools out and took off the gas tank so I could get to the carb and cleaned out the float bowl and checked the high speed jet to make sure it wasn’t plugged. Put it all back together and that didn’t fix it.

This one has me stumped and I didn’t get the pressure washer going.

I finished out the day chair hopping and that was my day.

2 Responses to Getting the Toyota Land Cruiser Project Going