Getting the Chainsaw Stuck In a Tree and Rats

What to do today?

I wasn’t feeling like doing much of anything today. So I did some chair hopping and thought what if I didn’t do anything?

After some more chair hopping I decided to at least get one thing done and that was to try and fix the chainsaw chain. I’ve been doing something wrong when I sharpen it and it goes sideways and binds up when I try to cut a big log.

I got to the chainsaw in the late afternoon and had a good look at the chain and decided I’d filed one side of the rakers wrong. The rakers are the teeth that set how thick of a chip the saw cuts and my chain needed to be filed down so the saw teeth could get a good bite.

Well, of course after getting that done I needed to give it a test out.

I filled the saw up with gas and oil and put it on the quad runner and headed up into the hills as I knew where there were some larger trees down across the roads up there.

This is what the first one looked like as I arrived to get it off the road. It died and fell over, a tan oak tree. 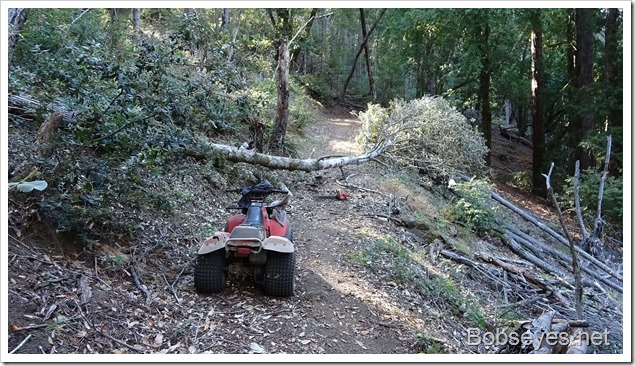 I tried the saw out to see how I did sharpening the chain and it was much improved but still not perfect, but at least it cut pretty good. I had to cut the logs small enough to push them off the road. 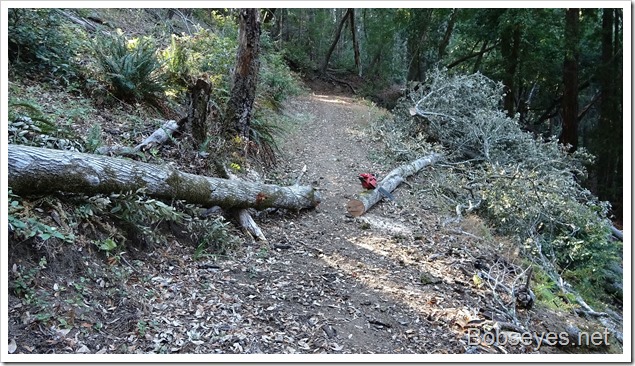 I got that done and worked up a bit of a sweat and rested a bit before heading out to the next one over at my cousin’s place. Cleared and ready to pass. 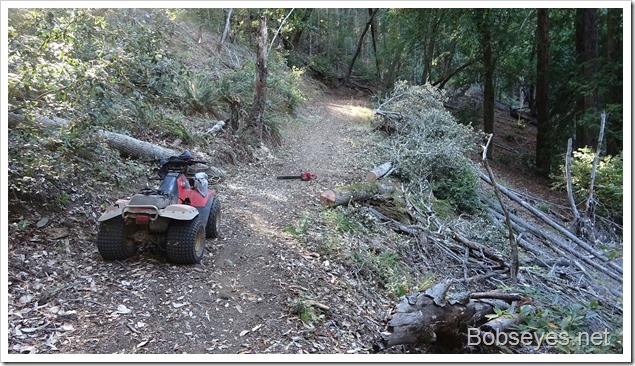 I knew the downed tree at my cousin’s place was a big one and almost turned around and left when I saw it. 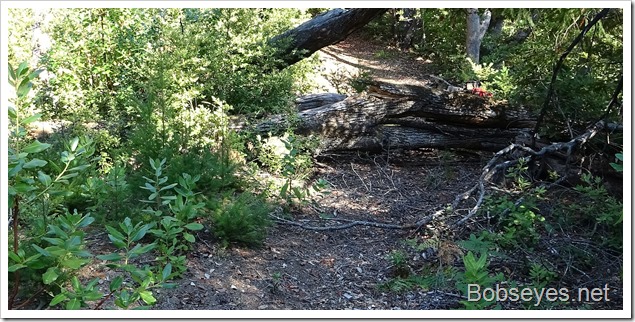 The chain on the saw could still use a bit of improvement but I was able to get through the logs, getting the top one off first,…………… But.

I almost had the bottom log cut but when I cut thought it, the log fell just enough to pinch my saw blade in the log real good. I couldn’t move it, it was stuck good. 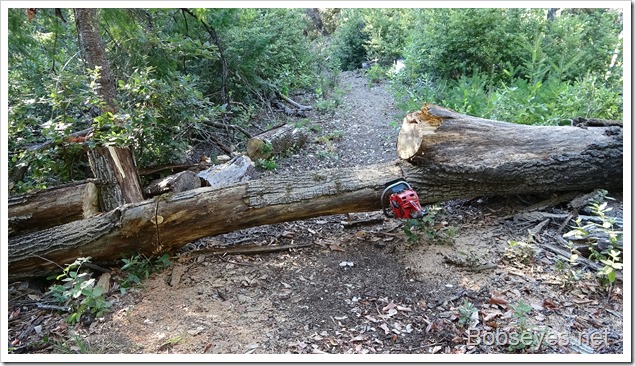 I didn’t have any tools to help out with getting the saw unstuck, so I looked around for a block and a lever after thinking about it for a bit. Most of the lever stuff was a bit rotten so I tried to find a good one.

But the first lever turned out to be rotten and broke on me as most of the stuff on the ground was rotten. 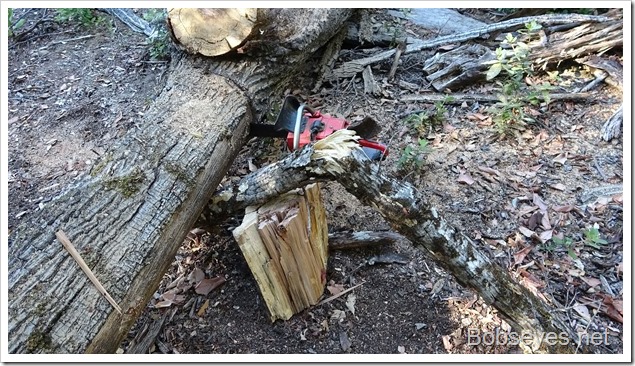 I found another lever and was able to  move the heavy log a bit but still not enough to get the saw out. 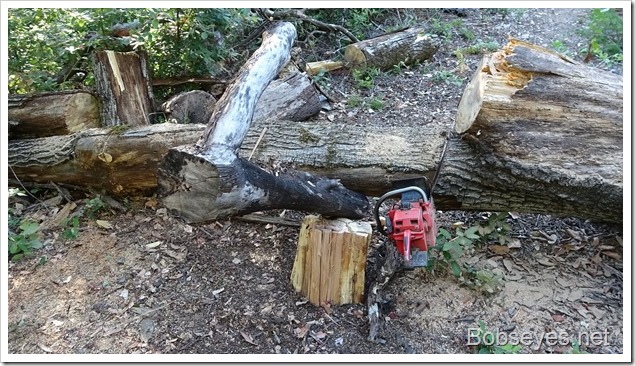 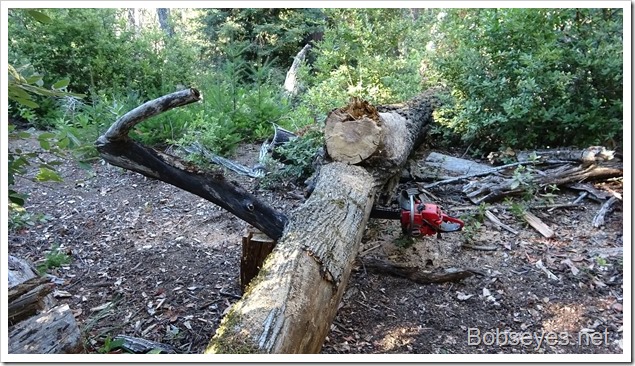 I got the saw out and finished cutting the logs and got them on the ground. 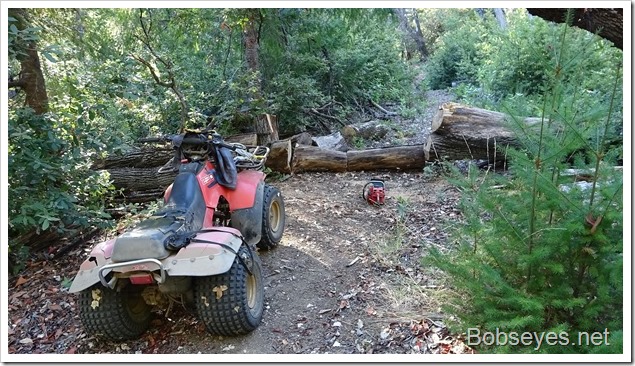 I cut the one log in half so I could roll it off the road which took a bit of work, also known as exercise. :O) 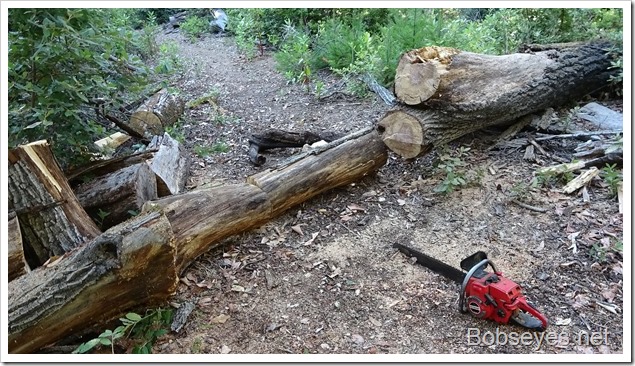 I’d pretty much had enough for the day, so I continued on down the road and took the lower one headed back when I ran into some more down trees. 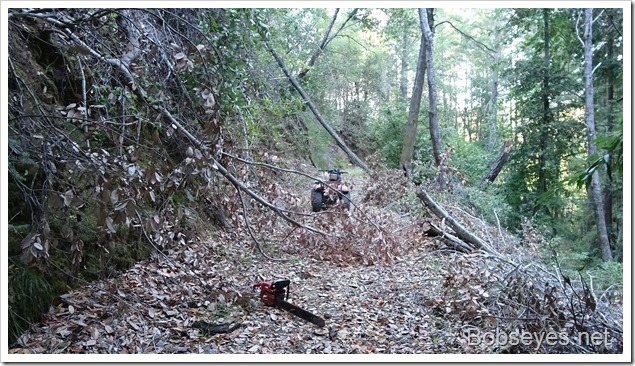 And just past those ones there were even more, so I loaded back up the saw and turned around and tried the middle road. 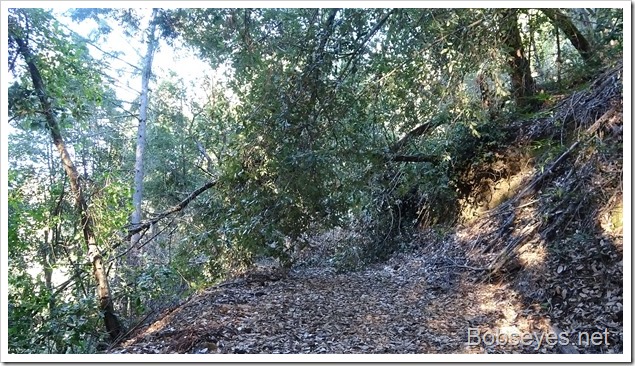 But the middle road  had more trees down on it and I didn’t want to get any more exercise for the day so I turned around again and rode back up the hill going back the way I’d come. 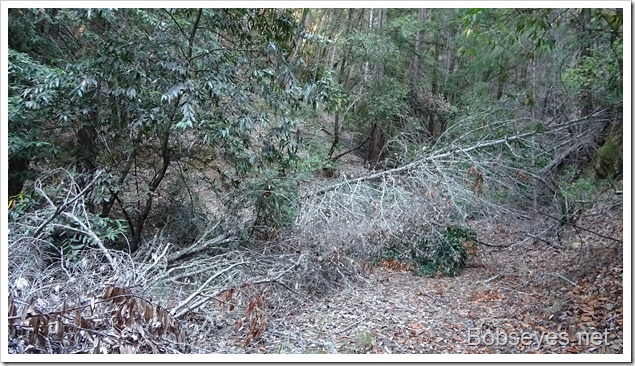 Seems I got a bit more accomplished today then I thought I would.

I’ve been watching the rats in my chicken pen with the onion soup and baking soda bait I set out for them. They were going by it but not to it as they were being real couscous. After watching for the second night I went out and put a few oats in front of the can and when I went back in the house they were on those oats. It seems they are more willing to go to what they where there for in the first place without being so couscous. I think they’d make it to the onion soup if given enough time. I put that batch in the garage for them. No cam on that one.

So, tonight I mixed a new batch up with ground oats and baking soda and put a few oats outside the bait can. They came to the oats in a short time and seem to be interested of what’s in the can so I’ll keep watching them to see what happens. I think at least one of them is hooked, or should I say highly interested in what’s in the bait can.