Getting My Real ID Didn’t Go So Well

Today I had an appointment to go to the California driver’s license place to get what they call a Real ID driver’s license. I’d filled out all the stuff about two months ago online and made the demanded online appointment for ten in the morning. That’s a little early for me but doable just barely as I’m a night owl and don’t get to bed very early or get up early either but I thought I could do it.

So I got it going and grabbed my folder full of documents that I’d put together two months ago and for sure I don’t remember what’s in that folder but hopefully what is required for the license.

Sure I have a birth certificate

I arrive at the DMV

Anyway I drove on over there with time to spare, a little and walked on in and looked around. What to do? I hadn’t been in there in a number of years and things change.

Luckily they had a lady walking around picking people off like me and so she asked for my 8 digit number that they assigned for my appointment. What? It’s been a couple months since filling things out for this as California is so backed up. At my age things don’t get remembered anymore. :O) Just the way it is.

Anyway after fumbling a bit I said maybe it’s in this folder and looked and found a sheet of paper I’d written stuff down on.

So she copies stuff down and says get in this line and they’ll check out your papers to make sure you have what you need.

I didn’t have what I needed

So I did and I didn’t have what I needed. They didn’t like my original birth certificate from the hospital and said I’d have to go over to the county recorder’s office and get a certified copy of my birth certificate.

And we’ll extend your appointment until 3 today if you want to go get it.

Off to the recorders office

OK, the county place is across the city so I headed there and I hadn’t been there in a long time either, but I found the place without too much trouble or at least the address but where the recorders place was I had no idea but I was sure it was close as I was at the right address.

They don’t seem to like to put out many signs to help you out. A lady walked up the walk as I was looking and she looked sorta business like, so maybe she knew what was going on so I asked and she pointed me off to the right of the building where I looked but didn’t see any signs, so I thanked her and headed that way.

I walked into this new place, past the computers and was looking around when I saw someone and told them what I was about. Just go to one of those computers over there and fill out the stuff and then we’ll see you. OK, I can do that.

They don’t have it

So I did and then went to the counter where the lady started looking for my birth certificate on their computers but no go, so I showed her a copy of my original hospital birth certificate that I had but was no good and she looked some more then asked the person behind her and that person started looking. After about ten minutes the person behind her says we don’t  have it, we’ll have to send to the state which takes about two weeks and we’ll call you. OK, whatever has to be done.

Just the way it is

So in some ways all this was a flop, but then again it’s just what all needs to be done to get things done, sometimes that’s just the way it is. :O)

All that messed up the rest of my day, what to do. I eliminated some of my shopping across the city that can wait and drove over to a friends house where I was to leave some kiwi wood for smoking fish that would get up to Oregon to a fisher buddy that wanted it. He wasn’t home so I left the sack of wood on his porch and drove to Home Depot where I bought a new shower valve repair kit that I hope is the right one.

Then I went next door to Walmart and bought a new battery for my Quad Runner.

That done I drove on home. I needed to unload the feed but a nap was in order after dealing with all of that.

Around 4 I started to go out to unload the feed but a rain shower decided it was time to fall so I went back in for another nap until about 5 when I couldn’t hear any rain so went out to get the chicken feed from my car to the feed shed.

I had about 8, 50 pound sacks to unload into the shed. 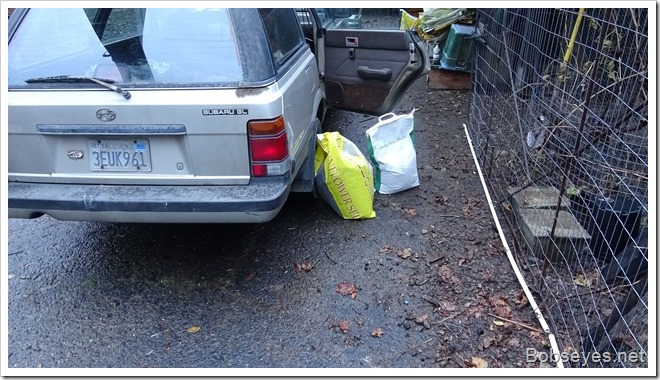 I’m glad they are not 100 pound sacks like the old days. 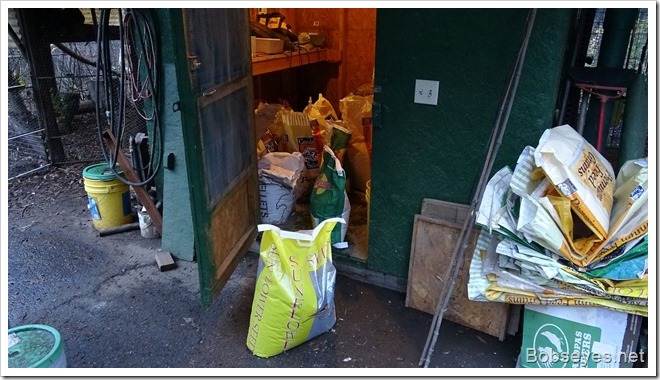 I got them all into the shed. 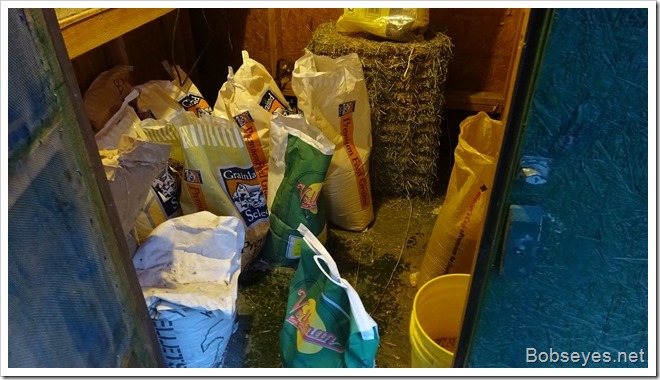 I was thinking I need to rearrange things with the sacks so I moved them around some. Somehow I need to figure out how to move the new sacks in so they are in the back without moving all the other sacks to get the new sacks behind them.

Not sure how to accomplish that but I did move stuff around a bit to make it a bit better.

That was my day. It certainly didn’t go as planned but I guess it did go. :O)

Nice day otherwise. I hear we are in for some more rain showers which is fine with me and it’s starting right now as I hear it pelting on my metal roof.