I got a phone call early this morning saying the diesel delivery guy would be by in about a half hour.  That meant I had to get it going and go out and open the driveway gate and move some stuff out of his way as his truck is pretty big.

He showed up right on time. 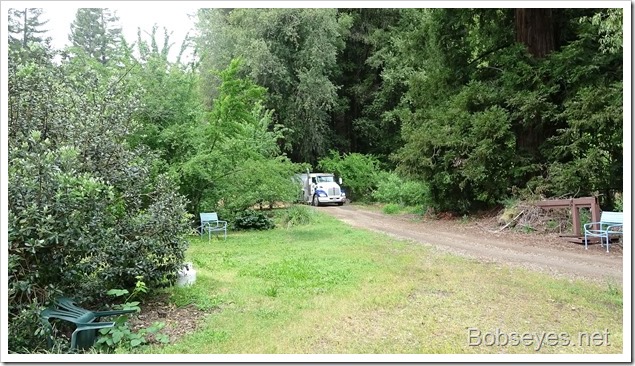 I keep an eye on him so he doesn’t run into stuff, but actually he’s used to pulling into country places and ranches as he delivers up along the coast where there’s lots of backwoods ranches.

He fills up my diesel barrel and storage tank, about 175 gallons. I bet that’s going to cost me a lot. :O)

He’s winding up his hose. 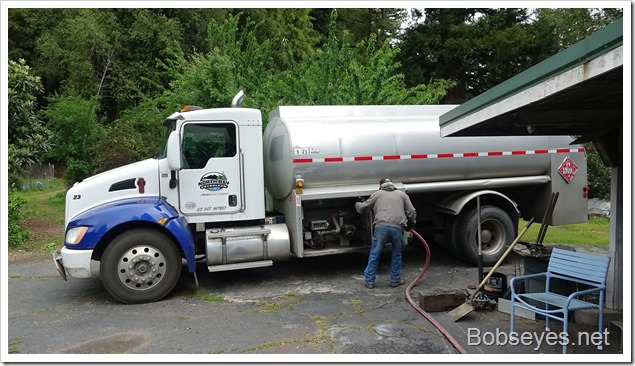 Frank is a local guy of one of the old families here, like me. So we sat and shot the bull for a bit, mostly about local stuff.

I made sure he got out of the yard ok and went back in the house for something to eat as I didn’t have time to do that earlier.

It was trying to rain today, but only a light mist was coming down that didn’t even wet the ground. I thought it would pick up so didn’t have much planned for the day and mostly chair hopped with the chickens.

I did want to check out my brother’s golf cart battery charger he said wasn’t working as I thought the relay might be bad but needed to check it out to be sure. I had jumped the relay and my brother had the charger on the batteries, but said when he tried the cart it still didn’t move. He thought it wasn’t charging.

Here’s the insides of the charger I was checking out. 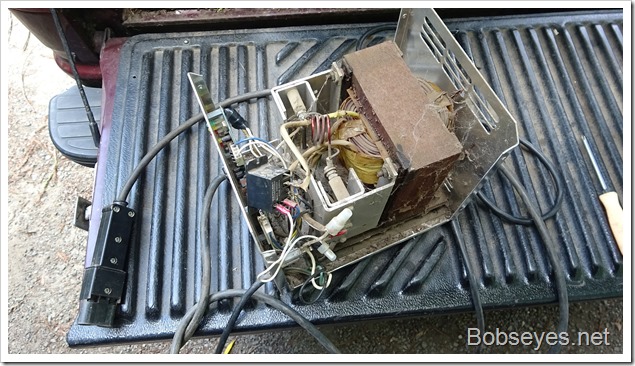 After checking out the relay I found it to be good so I took my jumper off the relay and hooked the charger up to his cart and turned it on and it worked.

About that time my brother came by and I said the charger was good. He said the cart doesn’t go so I said it must be something else then as the batteries and charger were working just fine.

He messed around with a switch that he said should click when he switched it but no click but after doing that several times it clicked to our surprise and now the cart worked just fine. The cart had been sitting around for a long time not being used so it seems something corroded a bit but worked it’s way out while we messed with things.

Towards evening the mist picked up just a little barely wetting the ground and the day cooled down so I went in the house where it was warm.