Getting a Root Cannel Fixed and Taking Care of Kitty Kat

Well, not really a dentist but an endodontic, or what is known as a root cannel specialist.

I  had to get up early to get over to Santa Rosa for my appointment which was the hard part, or maybe the paying was. :O)

I did have to take care of my chickens and my brother’s chickens before I left and that was part of the reason I had to get up early.

I drove on over to Advanced Endodontics which is in Santa Rosa CA.

I’d had a root cannel done about a year ago and it was still hurting, just a little, indicating something was wrong with it.

Dr. Wu did the work and I must say, he was very thorough and very matriculate. He found the other guy had missed one of the roots so he needed to go in and remove it which he did. He said the root he missed was one that is often missed.

He was able to drill through the crown so at least they could put a filling in it and I wouldn’t need another crown, so I saved some money.

All his staff were very nice and real good at what they did. I was in there about two hours to get the job done.

After that I went to Costco to get some much needed supplies as I hadn’t been in there since before all the recent rains started and my supplies were running real low. I loaded up my basket and paid and was on my way, stopping at a hardware store on the way home.

By the time I got home, it was late in the day, so I didn’t get anything else done, partly because all the pain stuff was wearing off and things hurt a bit for a few hours. I napped a bit, but wasn’t feeling too good until the pain subsided in a few hours.

Kitty Kat is my neighbor’s cat and stays with me when she goes someplace, so she will be with me for about a week. She knows the routine and takes over my bed, at least until I need it when she moves to a couch.

Here she is, just waking up from a nap. 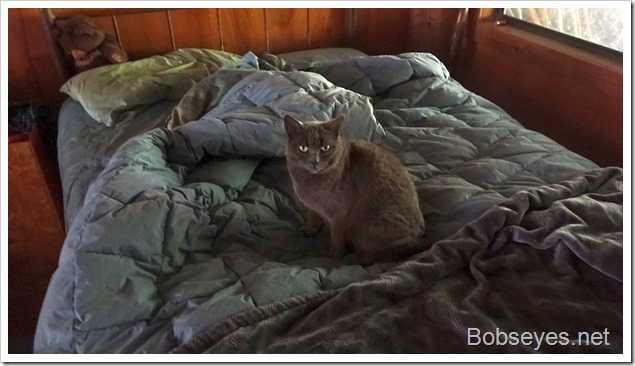 She has it good as she has the run of three houses and three yards and is a pretty good mouser, but no good on rats. Smart, as most cats don’t mess with rats as they are just too mean.