Generators, and Cutting Storm Fallen Trees Off the Forest Roads.

It rained about three inches during the night. But now the sun was out, hopefully for the day.

I had a look at the creek behind my house and it was flowing fairly fast, but wasn’t really up that high, mostly because of the breaks between the rain storms. 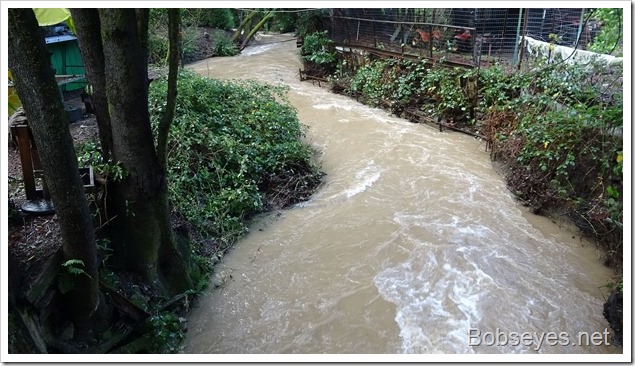 The generator we’ve been using is real hard to pull the start cord and is leaking oil into the electrical generating unit so we brought over another generator Tom had to see how it would work. We got it hooked up and after some trouble shooting, getting everything turned on, we let it go for the day. Tom has this years harvest of potatoes in his cooler worth some thousands of dollars and he needs to keep them down near 38 degrees F. to keep them from sprouting. That’s the main generator use. It also keeps our freezers and fridges going. 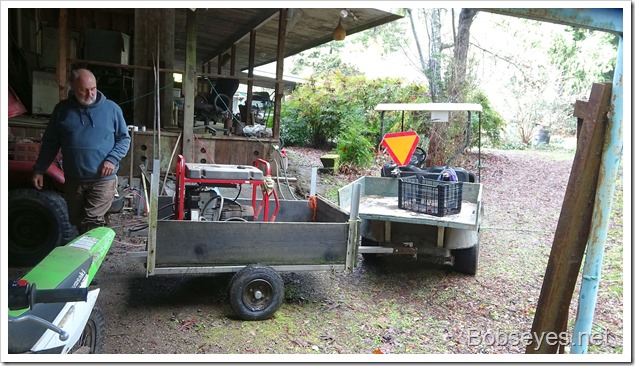 After that we put in an order for a new larger generator as these ones are a bit small to run his cooler. The new one will also have electric start. Yeah.

After we had the generator stuff all taken care of I gassed and oiled my large chain saw as today, I needed to cut some  larger trees off the forest roads. I took a shovel too as there is always something that needs ditching especially after a big storm.

I knew Tom ad Dominique were going to walk to the waterfall today, so when I got to this little creek I figured they’d have a hard time getting across it without getting their feet wet. 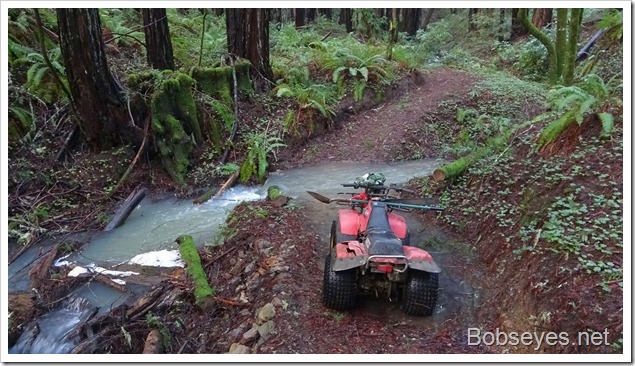 I built them a rock and log crossing which they’ll likely fall off and get their feet wet anyway. It’s  not that cold so wet feet shouldn’t really be a problem. 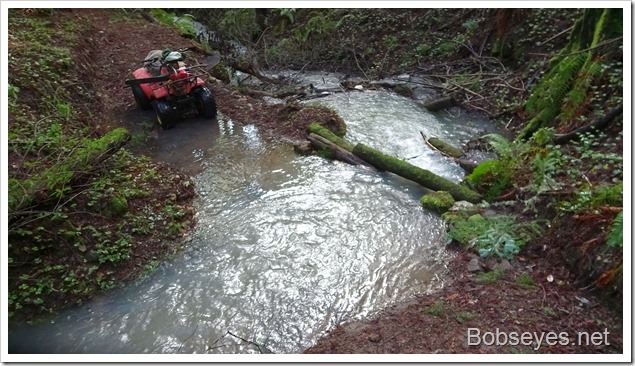 Headed to the waterfall

I continued on up the trail headed for the waterfall to have a look. 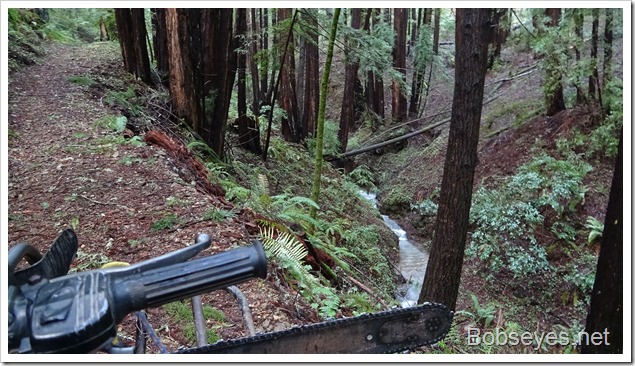 The quad runner got parked here, just below the falls. 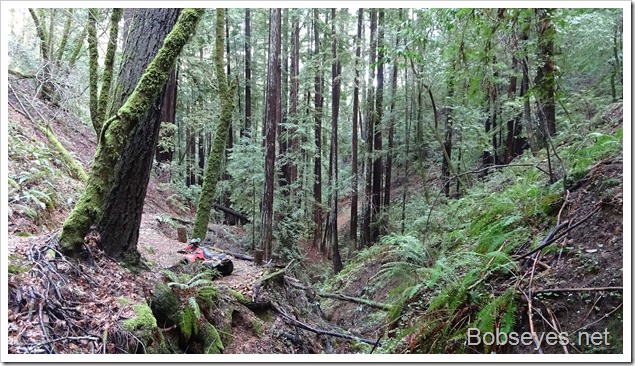 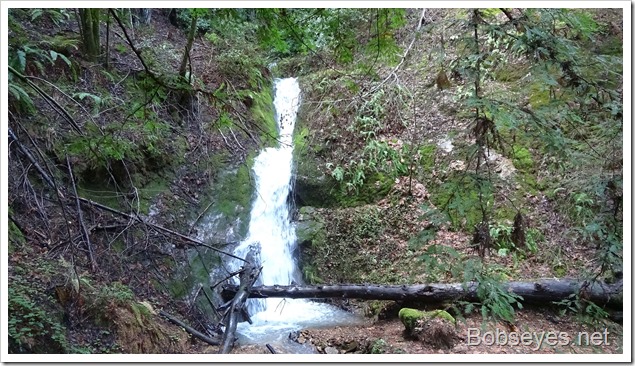 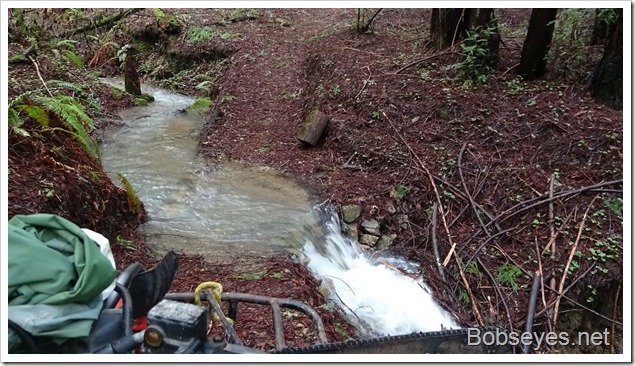 This was the first tree I stopped to cut off the road. 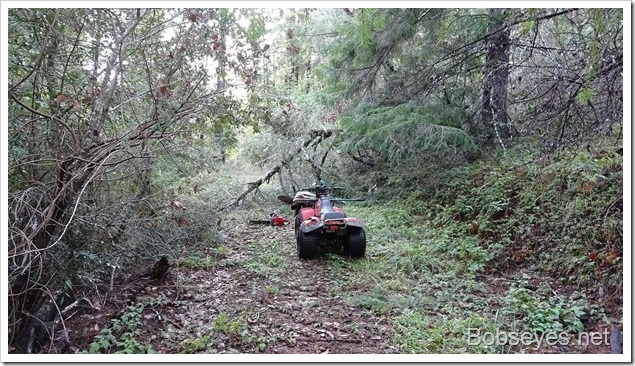 And then I went up to the main forest road where I knew there was a fairly big fir tree down that needed some work. The tree is in the air on the left, so I have to study the tree a bit before cutting it to make sure it doesn’t get me and also to make sure I cut it right to use it’s weight to help move it off the road as these logs are heavy. 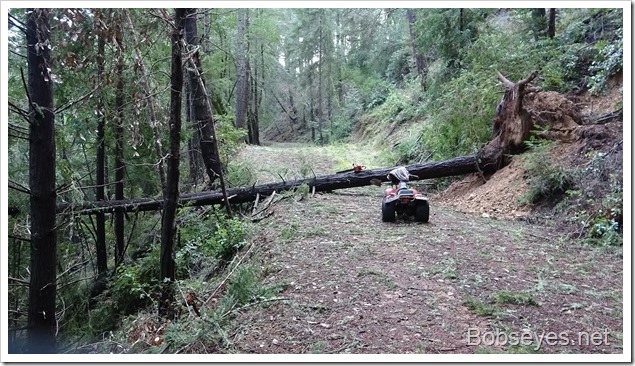 I made my cut and was hoping the log would go down the hill but it didn’t. I did expect it to go up in the air like that so was careful doing the cut. 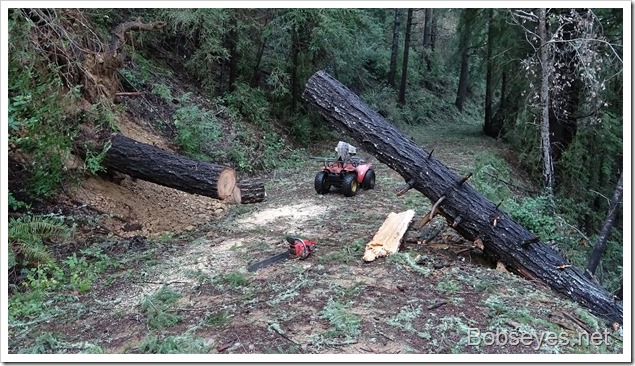 I cut the log up enough to get a truck through there. 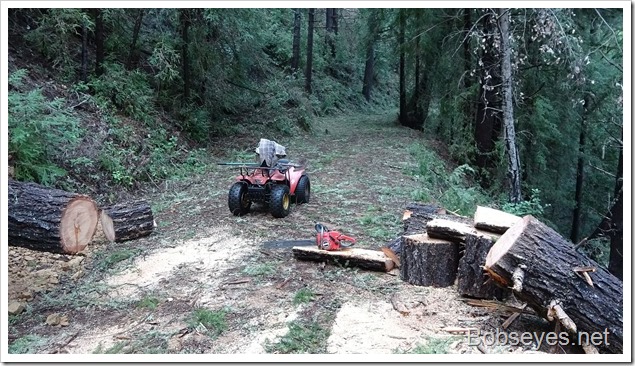 From there I went over to my Cousin’s place and checked the road around there. All was good with that, so I rode on over to the other side of the property to another neighbor’s place. I thought there were one of two trees down on his road, but I was wrong, there were  more like ten of them. I started with this madrone tree and cut it up into small pieces and only removed enough of the cut wood to get by and would let my neighbor finish the job of getting  the rest of the cut pieces off the road so he could get  his truck by it. 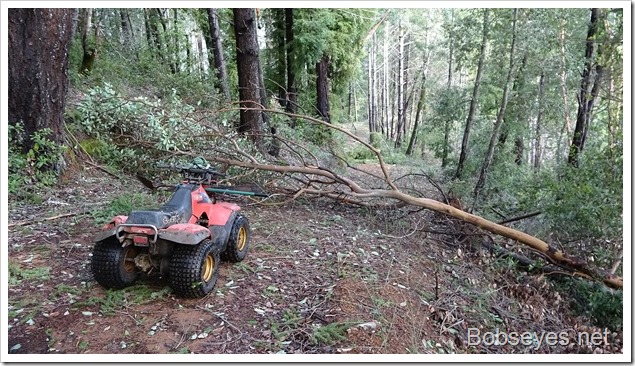 Just past that one, was this big mess. I did the same thing and cut it all into small pieces and only moved enough of it to get by. 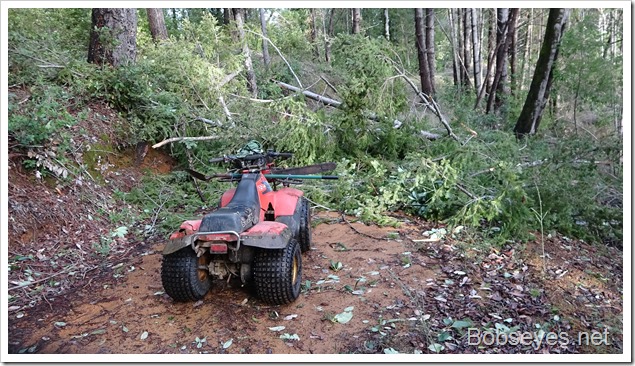 This one, I cut into four foot pieces and just moved one piece to get by. I’m running out of energy, so I’m trying to conserve enough of it to get all the trees at least cut up. 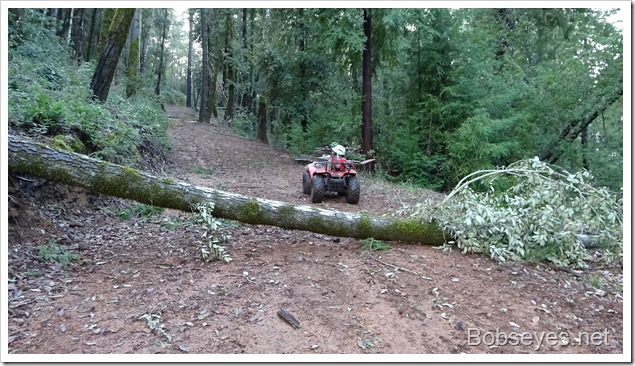 I cut a bunch more trees off the neighbor’s road. When I looked at my watch it was ten to five and thought I better get on home before it got dark. It’s a good thing the days are getting longer.