Gates Up and Poo Dirt Moved to Some Fruit Trees

It was drizzling this morning when I woke up so I stayed in bed for a bit longer just because I could.

The drizzle stopped by the time I got it going and the sun was out nicely as I went outside to see if the chickens needed any feed. I put some feed in their feeders and checked their water which was ok.

Today I was going to get the wire on the three new gates I’ve been working on constructing so I got the tools out, took some measurements and cut the wire. 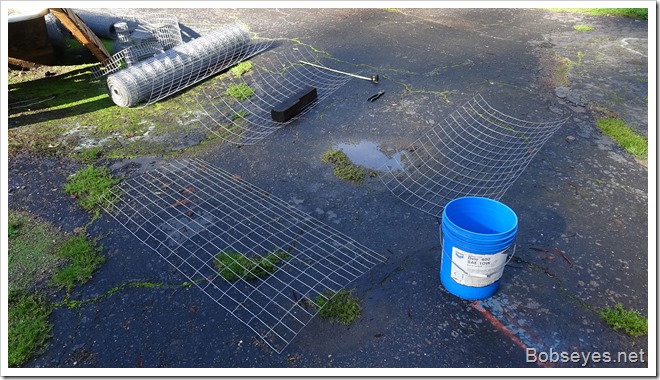 When I went to cut the new roll of welded fence wire I found I’d gotten five foot high wire instead of the six foot wire I paid for which was totally my fault as I loaded the wire. Five foot would work ok for the gates so I was good to go on that so I used hog nose clips to fasten the wire to the rebar frames I’d made. 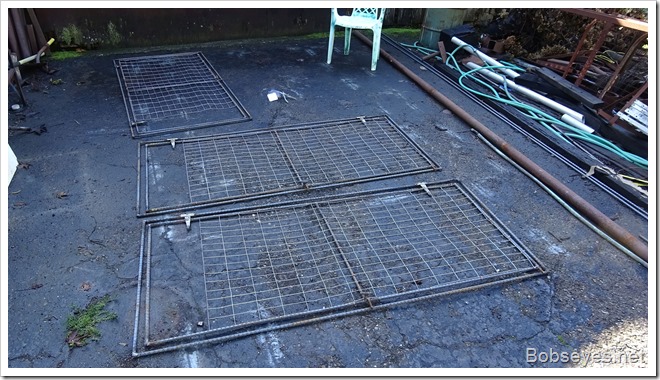 After a break I installed this gate. the fence wire was already up so I just needed to stick the gate in there and wire it up. It’s nice to be able to walk through here instead of walking all the way around. 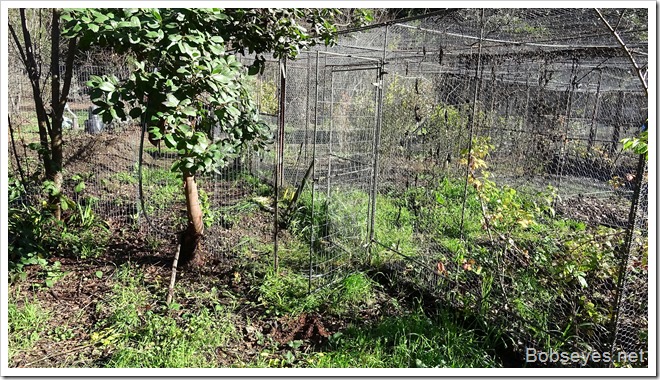 This is the second gate I installed. The fence wire was already up on that one too so I made quick time getting it up and functioning. 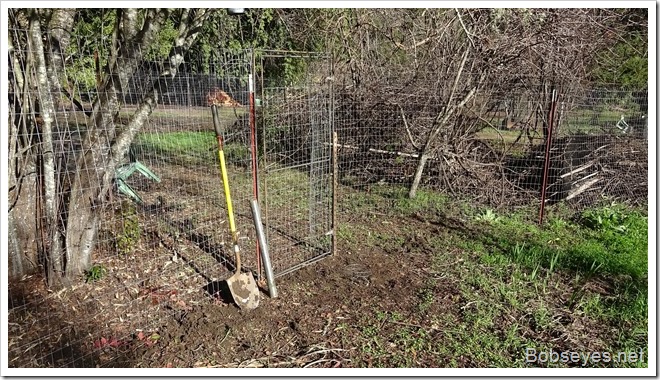 I was going to use the fence wire I bought to fence the raspberry patch, but decided it was just too short and I needed to get some six foot fence to do it but that didn’t stop me from installing the gate for now. 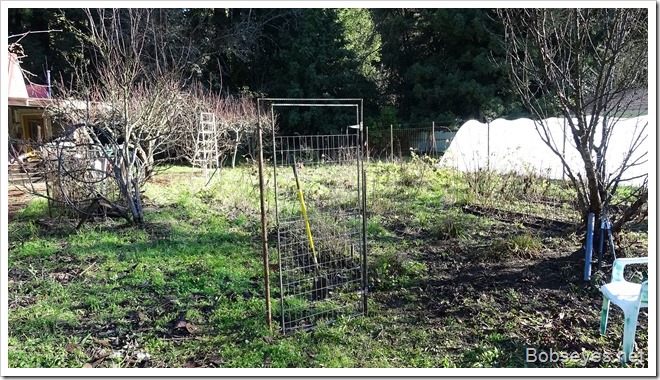 After another break I took all the roofing material down that I’d been checking out on the new bigger chicken coop roof. I decided I needed that roof longer. I had 4 feet up but decided I really needed 8 foot lengths but all I had left of my old scrap roofing was too short.

So I laid all the roofing pieces on the ground and rounded up enough pieces to extend each piece to 8 feet. I found I just barely had enough roofing material to do the job and some of it wasn’t in real  good condition, but, hey, it’s just a chicken coop roof and all it had to do was stop most of the rain water from coming through so it would work. I’m sure I’ll have to use some silicone to seal up some of the old holes in it.

I drilled and used pop rivets to  fasten it together to make the 8 foot lengths over lapping it a bit. 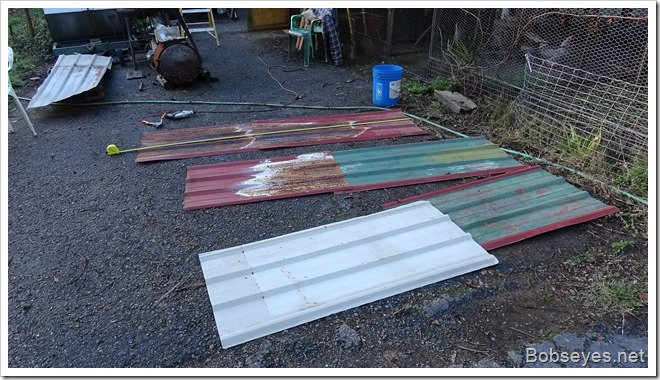 I got all the pieces riveted together and put them aside for now as I  have to make the roof frame larger now. One thing always leads to another.

It was time to let the chickens out to graze in the yard so I opened the gate and got out of the way.

Here they are rushing over to graze in the raspberry patch. 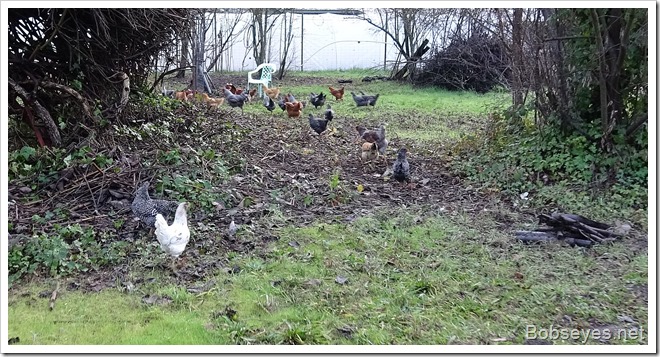 The new gate didn’t stop them. :O) It’s ok as the raspberry plants are dormant and they are eating all the bugs and weeds and putting a bit of poo on the ground which the berries should like in the spring. 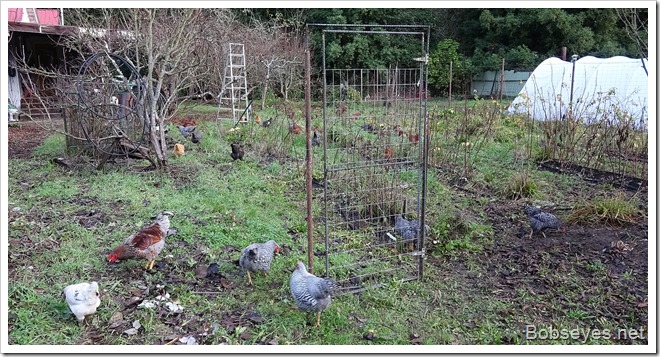 While the chickens were out of their pen and out of the way I got the shovel and wheelbarrow and removed about three inches of dirt full of poo. It was getting too wet and I wanted to put some woodchips in there to make things nicer and I think it would be a better collector of the poo.

Here’s the part that was getting wet with the poo dirt replaced with the woodchips. 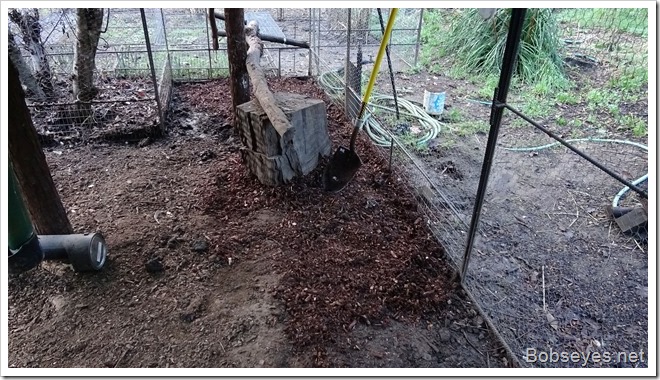 I wheeled the poo dirt I dug out of the pen over to some of my fruit trees and put some around the trees sparingly as the stuff is likely hot as it hasn’t aged much.

This winter the rain will slowly wash the poo stuff into the ground ready for the trees when they start to grow in the spring.

After that I was ready to go in for the day but I had to wait for the chickens to get up on their roost for the night so I could lock them in  so I waited a bit until they did. I closed the gate and then I try to give each one a pat on the back while they are on the roost just to get them more used to me.

Now I could go in for the day and I did.

Nice day, especially since it didn’t shower all day like the weather guys said it would.