Gate Extension, Marty Visits and a Toyota Ride Up the Hill

I have a gate I want to extend. I decided to extend it two feet and so I had to make the extension cutting some rebar and welding it up.

At the last minute I decided to make the extension three feet instead of two feet as long as I was doing it as a bit longer would be good I think.

Here’s the extension so far. I need to add some kind of latch to it so I’m still thinking about what kind to build. 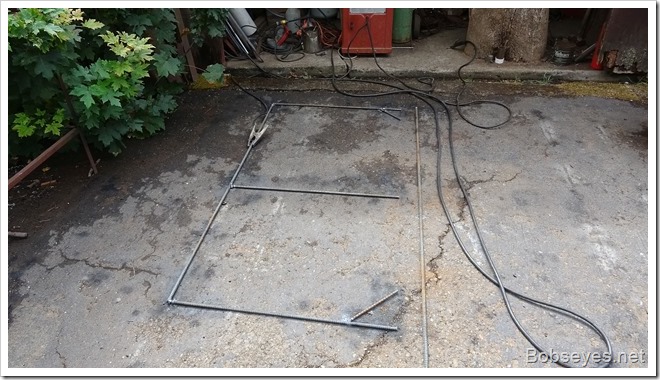 Watering and Marty shows up

So I moved on to some other stuff. I set two sprinklers to water some of the yard. And I did some chair hopping and some yard puttering until Marty showed up in his van for a visit. 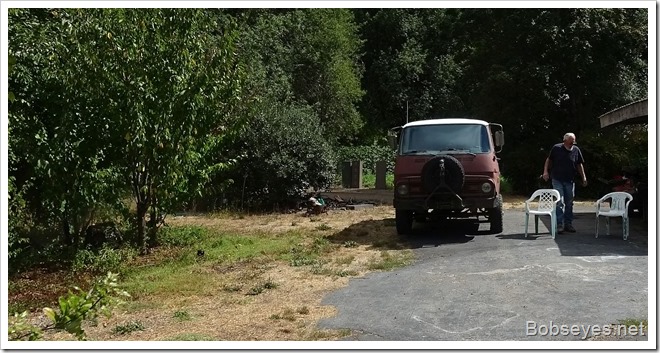 We sat around the yard shooting the bull for a bit then moved into the chicken pens and sat some more and more bull flew.

Then I said we can do two things. Go for a little walk to my brother’s garden and then go for a Jeep  ride up into the hills and visit my brother’s strawberry patch on the way back in another garden.

He decided he could handle a little walk so we took off through this apple orchard sampling some apples as we went. 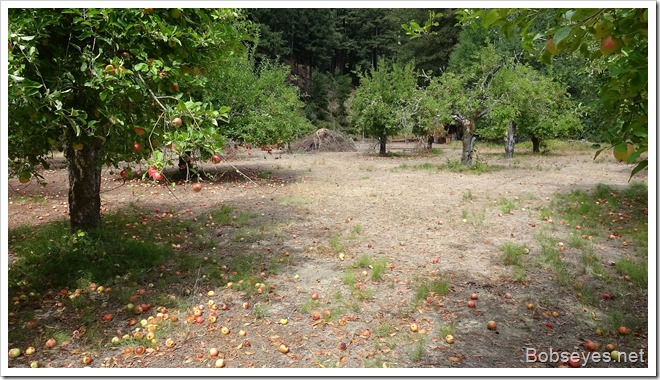 We walked around the garden but didn’t really find much to eat in this one so ate some more apples. 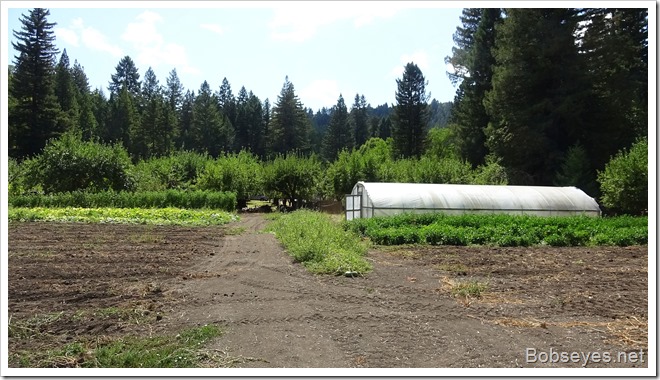 A jeep ride up into the hills

We made it back to my house and after a break we got the Toyota started and I drove up into the hills to check out my spring work.

Here’s one of the roads we drove up. 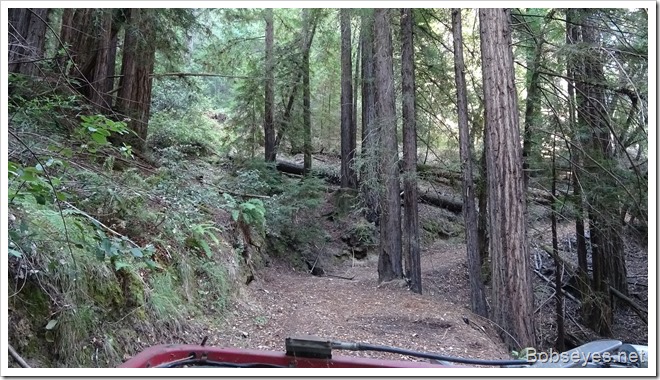 Can you make it 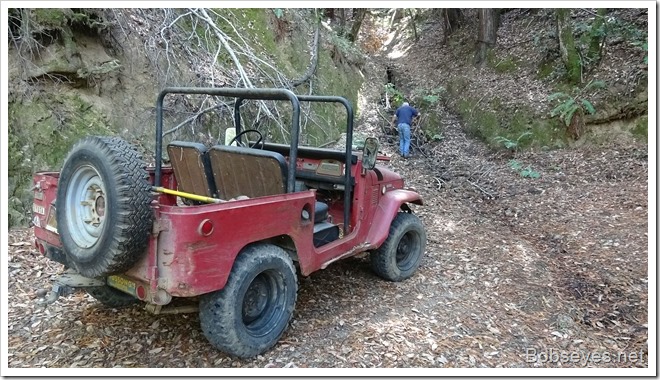 We stopped here to have a look at the cracks in the road which I need to close up before the winter rains. 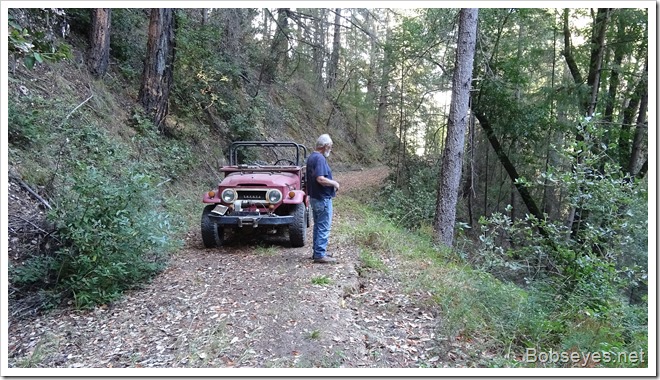 We made it to the ridge top overlook of Guerneville with this view. 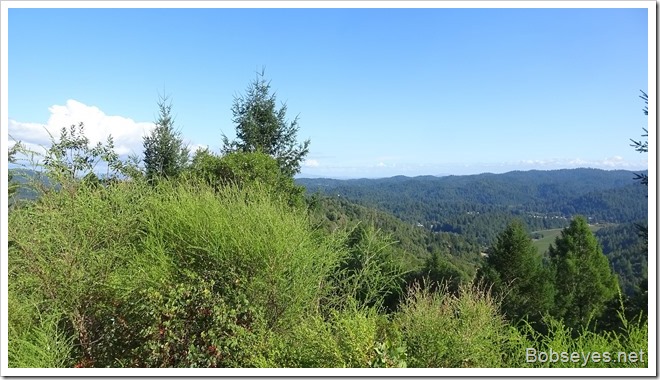 And then headed back down the hill taking another road down through here. 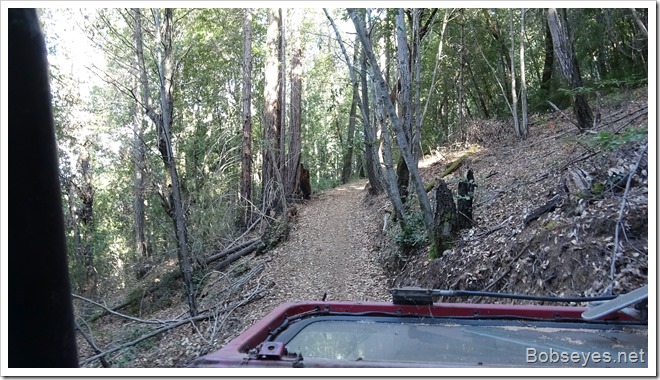 Cleaned out a spring

We went by one of my springs where’s there’s also a hog wallow that should be dry but it was full of water which meant my spring just above it was clogged up. I pulled off the pipe and about a quarter gallon a minute came out so I blow in the pipe to cause bubbles to clear the spring tap. We were both surprised that after it cleared there was more then a gallon a minute coming out of it so that’s more water for the tanks.

By the time we got back to my house it was five so Marty took off for home and I had a break.

Picking up apples for the chickens

A bit later I picked up a pile of apples off the ground and put them in the chicken’s mulch pen for them to eat. It’s funny but they only eat them a little under the tree but when I put them in the mulch pen they gobble them right up. 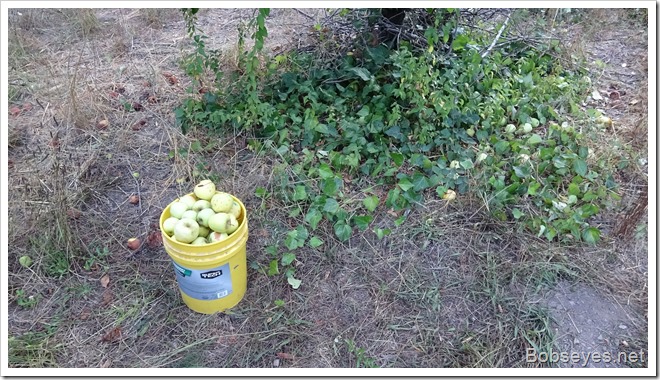 I ate a few raspberries. The second crop is just starting. Yummy. 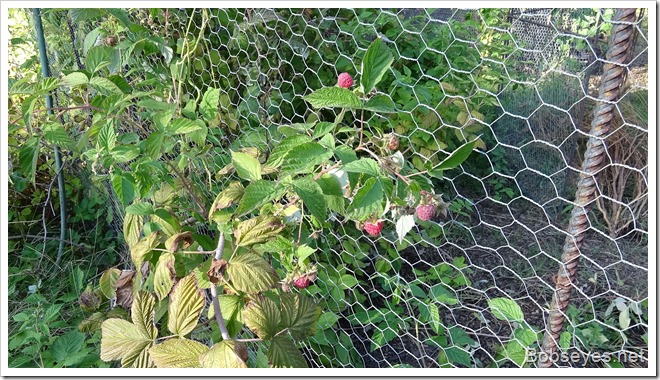 Just before dark I decided to move this fence a bit. It divides the yard for one of the chicken’s grazing pens and moving it would improve things a bit. I just pulled it back to this and then pulled it back to where I wanted it. Ill need to put in a couple posts and tie it off to finish the job. 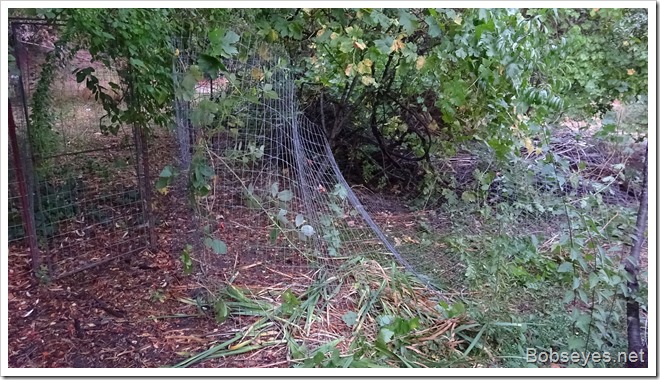 About dark I went in to shut the chickens up for the night.

Chicks up to the nest

The mother hen was sitting here under the next box up above. I added the chick only feeder and water cage on the right just for the chicks as they really need their own place to eat where they are not pecked by bigger chicks.` 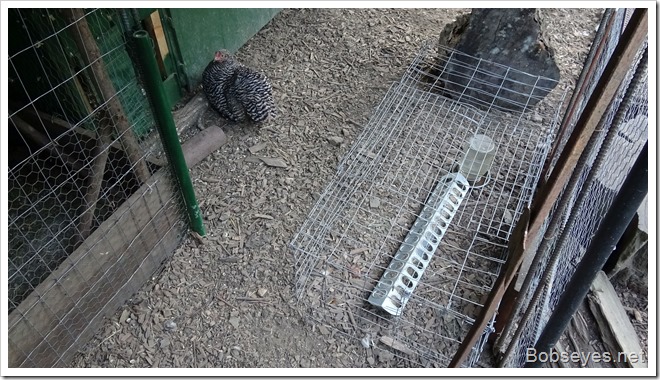 I went to lift the three chicks up but they were under Momma and I couldn’t get to them so I finally decided to lift up Momma first and the three little guys were sorta surprised Momma left and just stood there while I picked up one at a time and put them in the nest. That went well.

1 Response to Gate Extension, Marty Visits and a Toyota Ride Up the Hill