Fuel Oil Delivery, A Big Hole, No Work and the Cat Comes By

I had some good intentions today of cutting up some down tree limbs in the yard and picking up some brush.

But before I got out of bed the phone rang. It was my heating oil fuel guy who said he’d be there to fill my fuel tank in two hours, so I got up and got it going.

The guy must of snuck in

Once I got it gong I went outside and there he was in his big truck. I was surprised as I hadn’t heard him drive in. 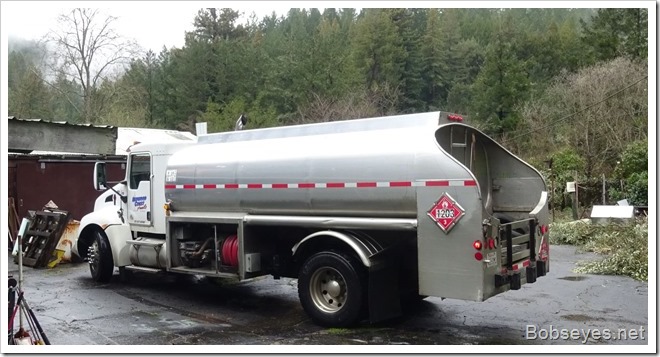 We shot the bull some

Here he’s just leaving in his big truck going out my driveway. 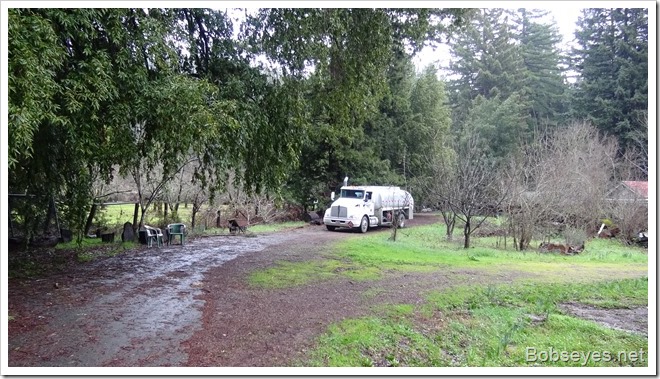 Raining too much to work in it

At this time I was going to cut up some downed tree branches, but it was raining lightly, just enough to get wet if I worked in it.

Hole in the driveway

I did notice his big truck tires had put a hole in my asphalt. Not his fault as old redwood roots are decaying down there in places so I never know where it might sink. He did the same thing last time in the same place which I had put some gravel in before, so it just needs some more gravel.

I went back in the house and puttered around a bit thinking the rain might let up soon, but it didn’t. It just rained real light all day so I never made it out there to do any work.

Cat comes by for a snack

That all meant I spent the day in the house mostly doing very little. The cat came by and wanted in for something to eat. Even though her owner has come back off a vacation, the cat comes by for a snack in the afternoon. By now it was raining a bit harder, so the cat curled up and had a good nap until the evening when there was a bit of a short break in the rain so it wanted out. I opened the door for her and she scooted out into the dark.

It’s still raining fairly hard as I write this blog.

1 Response to Fuel Oil Delivery, A Big Hole, No Work and the Cat Comes By