Waiting for a delivery

This morning I was expecting the fuel oil truck to come by to refill  my tank so I had to be up a bit earlier than usual.

I made it up ok and went out to open the gate so he could drive through when he showed up.

But my wireless remote control didn’t open the gate. I fiddled with it for a bit before I pushed the  manual button and it opened.

Seems I need to work on the gate sometime today.

Anyway I went back in the house for coffee.

We are still getting some rain, showers on and off so it’s a bit damp out.

I though maybe water might have gotten into the new antenna unit as I just installed the new system not very long ago but I was sure I installed the unit so water couldn’t get into it. I needed to take it apart and check things out after the fuel guy gets here and leaves.

As it was he was about an hour later than he said he’d be so I didn’t really have to get it going early but that’s how things go.

He filled up my tanks and we shot the bull for a bit and he took off so it was time for me to get tools together and see what’s going on with the automatic gate opener.

Working on the gate opener

Here’s the unit where the gate control lives. 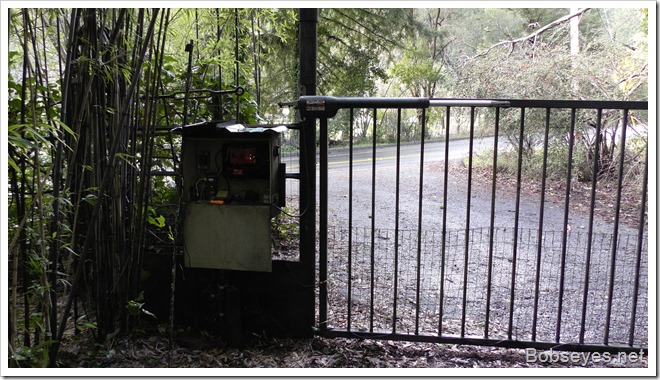 I took the antenna unit apart and looked at it. No water in there and I couldn’t see anything obviously wrong with it.

Getting some gate information

I needed to test things out but first I need to know what to test and what things should read so I needed some more info.

I called the gate people but there was a long hold time and they mentioned their support on their web page so I hung up and went there until I found what I needed to measure and what the meter should read on a good unit. The internet can be very helpful for things like this.

Chickens at the door

While I was doing this I thought I heard my chickens at the front door but they should not be there as they were out in another pen. I opened the door and there were about a dozen chickens. Maybe they just wanted to see me. To get them back where they belong I got some scratch out and called chick, chick, chick which means come on I have some goodies. I got all my three of them back in and would just get the other’s back later when they got tired of being by themselves or at least by roost time as they would com in to roost on their own.

I rounded up my voltage meter and went out to measure things to find out what was wrong for sure. 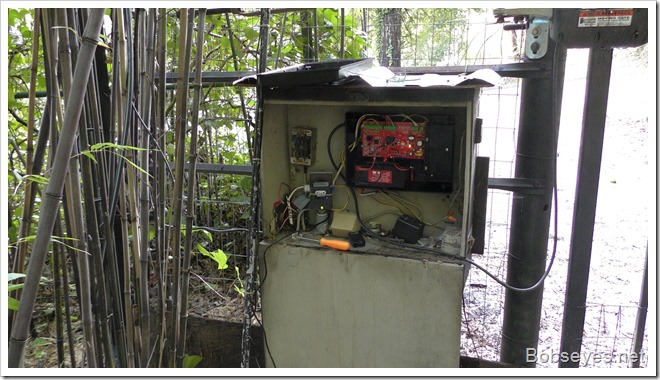 Sure enough the  antenna unit didn’t measure right so for some reason that went out.

I went back in the house and went to Amazon and found the antenna for about 70 bucks, not cheap. That’s why it’s a good idea to measure things to be sure what you need.

I went back out and closed up the box and put my tools away although I had to stop for a bit to wait for a hard rain shower to complete it’s business.

Too rainy to work outside

By this time the showers where picking up so there wasn’t much I could do outside today. I went back in the house and decided to cook instead.

What I wanted to cook was some cake or some cookies and I decided to make some cookies out of my cake recipe which means just put the batter in thin and cook it up and you have cookies. I’m always sorta experimenting when I cook so I wasn’t sure what to expect. My recipe was an old cake one. A  cup of flour, a cup of sugar, a pinch of salt and three eggs. The eggs make it rise fairly well. Of course I made more than that and put more eggs in than it called for but with chickens that’s what I have, just like the old timers.

My first batch baked up to about three quarters of an inch thick and came out of the pan hard, or I should say soft and it all hardened up when it cooled down and was quite good.

My second pan I used a cookie sheet and put the batter on thin and browned it nicely. I let this one cool and when I flexed the steel pan the crisp cookie cracked off the pan which was good. This was a more crisp cookie and good.

I made some more of each while eating a lot of what was already cooked. With my corn problem I don’t get to eat much in the snack department so when I get a snack I over indulge. :O) Maybe next time I’ll put some frosting on some.

Maybe a bit of snow tonight

Messing with the cookies took most of the afternoon. As the day progressed I noticed the day was getting colder. We may get a bit of snow tonight which is a real rarity around here. If we do it won’t likely be much which is also good.

I had a good time cooking cookies today and eating them too.