I heard a knock at the door this morning as I was getting it going. It was Barry. He had a fresh crab he had caught for me. Yummy.

He said he had to hydrate three of  his wine barrels that were leaking from lack of use. Barry has been making his own wine for a number of years now. 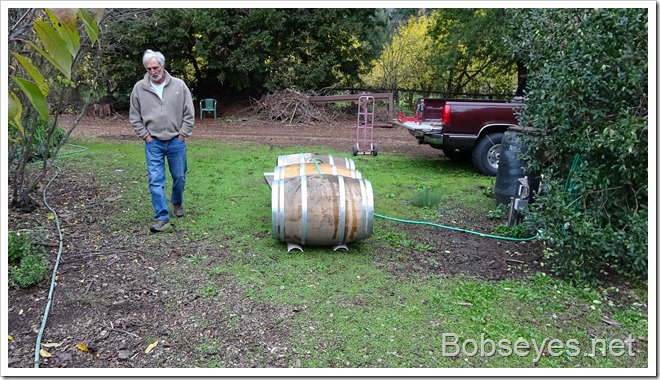 Brother Tom came by and said my main gate wasn’t shutting automatically so I went out to have a look. 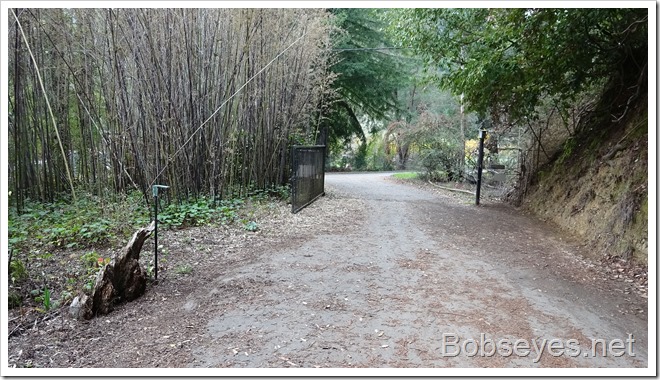 I opened the control box to have a look and eventually found a blown fuse. I tried a new fuse and got another blown fuse. The control arm has been a bit shaky for some time now and I had another new one that I could install later today and see if that would fix the gate. 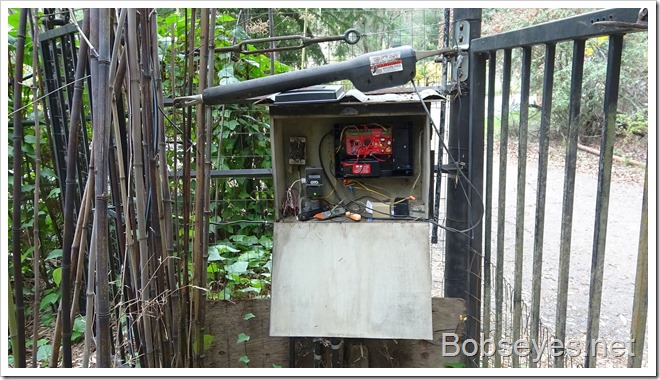 I went back to see how Barry was doing with his leaky wine barrels. This was the worst leaker. I asked him how much a new wine barrel costs thinking around 150 bucks, but no, he said they start at around 550 bucks and on up into the thousands of dollars. 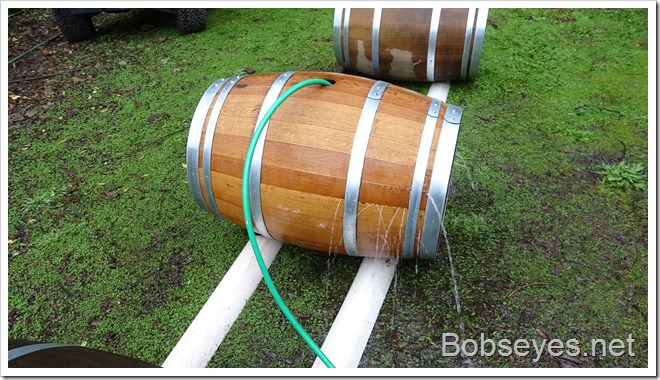 The water should swell up the wood and stop the leaks in time.

Justin from Stewards of the Redwoods meeting

At 1 Barry and I went over to meet with Justin from the Stewards of the Redwoods. He’s just taken over the lead position for that organization and they are running the state park here.

He wanted to check out the family property the State is interested in acquiring so that’s what the meeting was about.

Justin showed up pretty much on time and we went on a hike around some of the property going up by our water tanks. 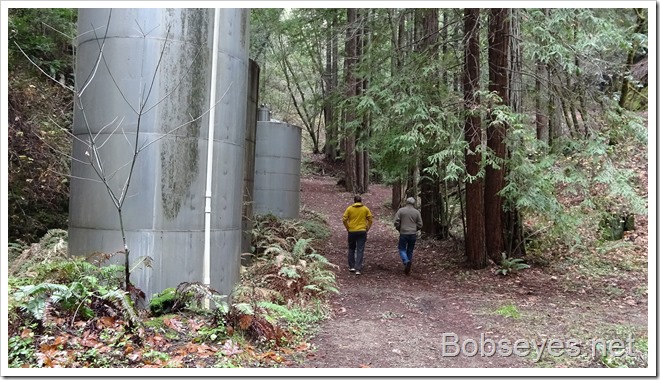 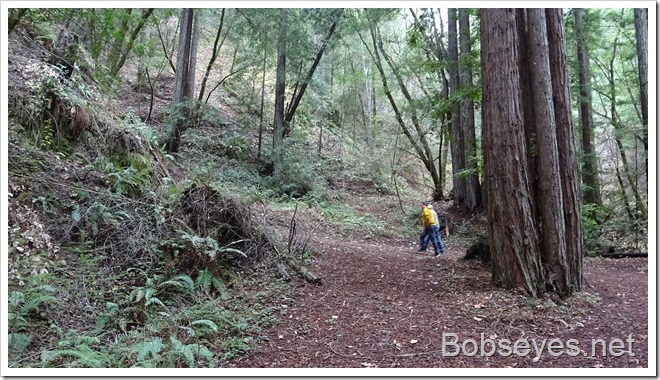 You can see some of the rain mist as we hiked along this rode shooting the bull, a, I mean talking business. :O) 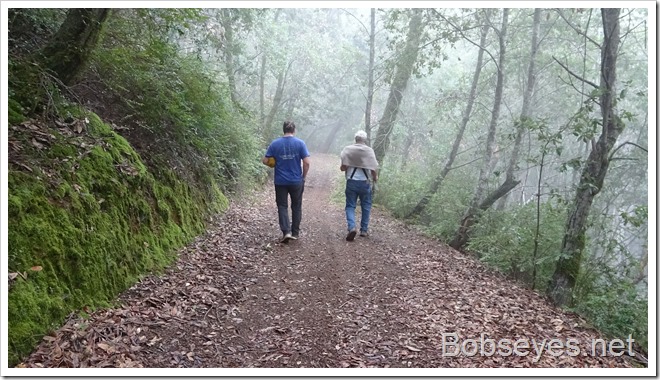 Actually we did discuss a lot about how the State may go about acquiring this land.

Here we are headed back down the hill and the rain has mostly held off. 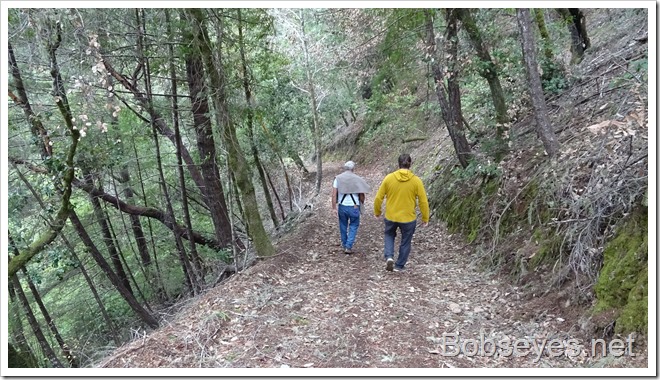 When we got back to Justin’s car we had a bit of a discussion and he took off and Barry and I went back to my house as we had stuff to do.

Barry needed to pull the corks out of all the wine bottles in these cases as the wine was bad. He said he wasn’t careful enough when he first started and the impurities messed up the wine.

He’s empting out the bottles and will take the empties to the dump.

Barry does make excellent wine just for the record, some of the best. 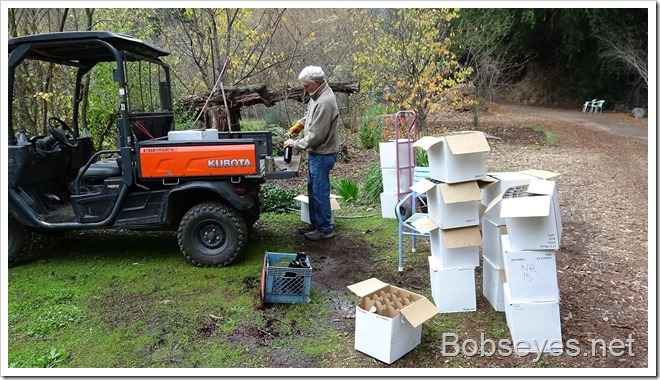 Back to the gate repair

As for me, I got the new gate control arm and installed it on the gate hoping it will fix the problem. 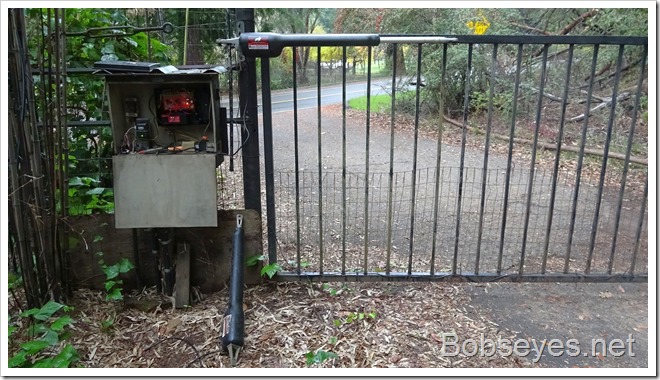 This is the new control arm I installed. 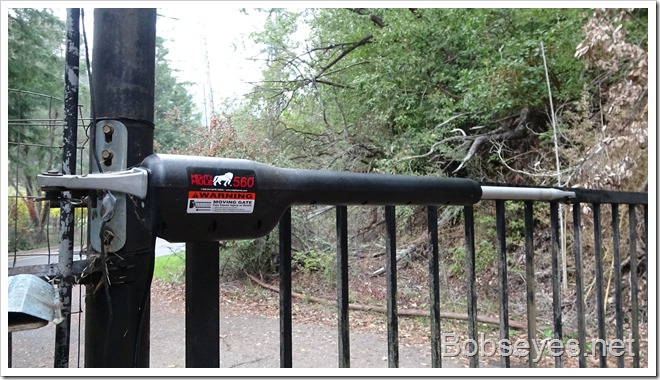 I replaced the blown fuse and hit the button and the gate worked properly which was good. 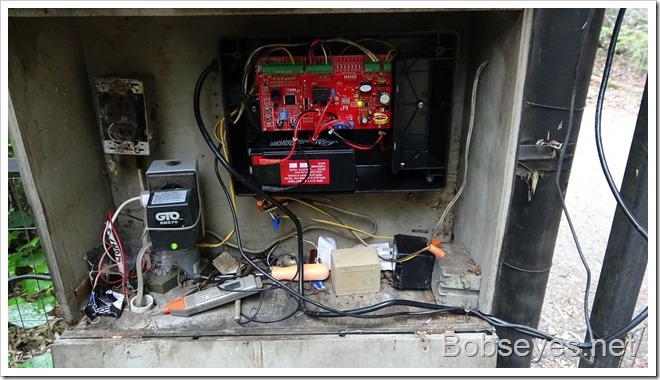 Barry loaded up all his stuff and headed for home just before dark.