Last night I set the box trap to catch the other fox,……….But.

The fox came by to check things out. 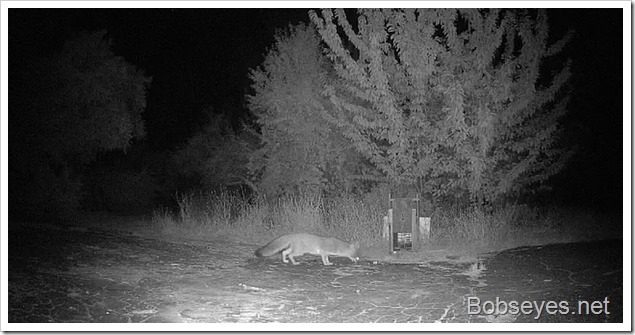 It grabbed up some food I had on the outside of the trap and took a look inside the box. 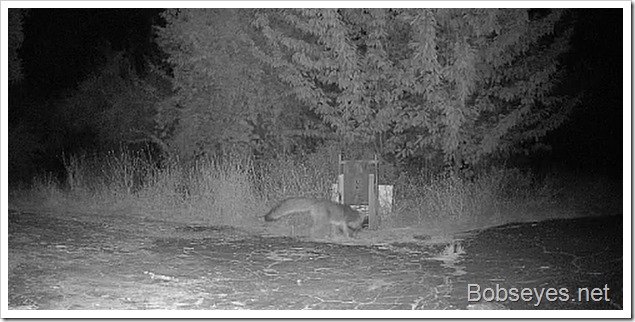 But  this one is cagey, so wasn’t gong to be caught which was ok with me.

Earlier in the day I was talking with my neighbor Dominique. She said I should change my ways with the chickens and only let them out later in the day when the foxes weren’t out and about. That way the chickens would be safe and the foxes could eat the rats and mice.

I was thinking about what she said while I watched the fox and decided she was right. If I keep removing them there will always be another one that comes around, so it would be a never ending battle and take a lot of time.

I decided even if I caught this one I’d let it go.

My problem is I’m a night owl

My main problem is I’m a night owl and it’s almost noon when I get it going in the day so the chickens don’t get fed or out until then. That’s why I made a door they can step on and open when they get up. They get up too early and become prey when they go out too early in the morning.

I need to devise some kind of clock that I can set to only let them out a bit later in the day to open the door and let them out. I’m thinking on that and have some ideas. I’ll make something once my ideas settle out.

So no more fox dealings for me unless they really get out of hand somehow. Things should be ok as I’ve been able to live with them up until now.

I wanted to hike around the ridge top where I’ve been exploring up in the hills to see if there was a better place to put a trail through the area than where I was planning it.

So, around 1 I rode the dirt bike up into the hills to the area I was interested in.

I parked the bike and walked up on the ridge top and through this jungle. 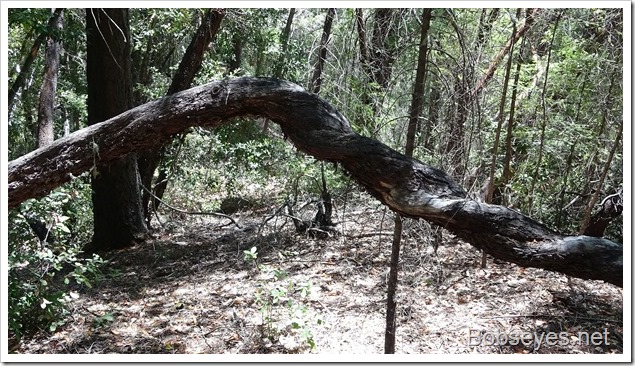 It was pretty wooded and overgrown so I had to work my way through it. 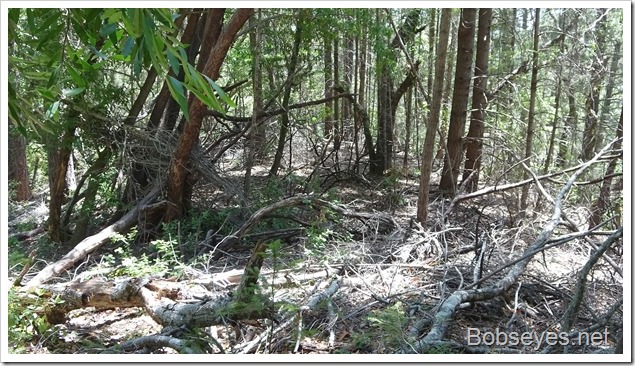 Some places were easier to get through than others. 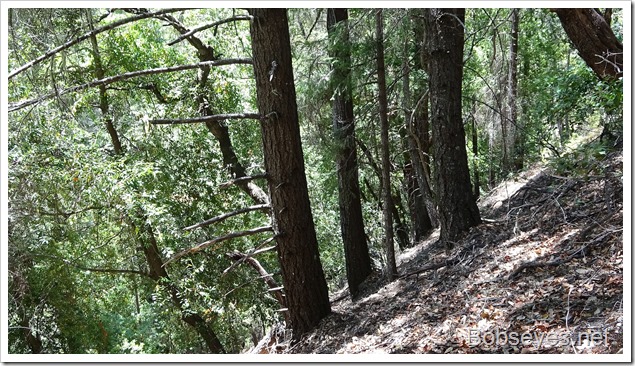 But most of the area was more like this. 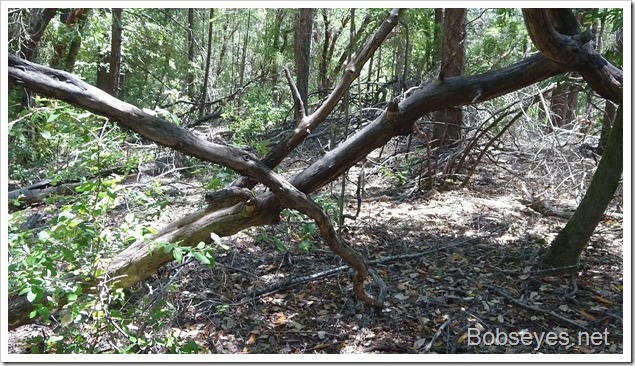 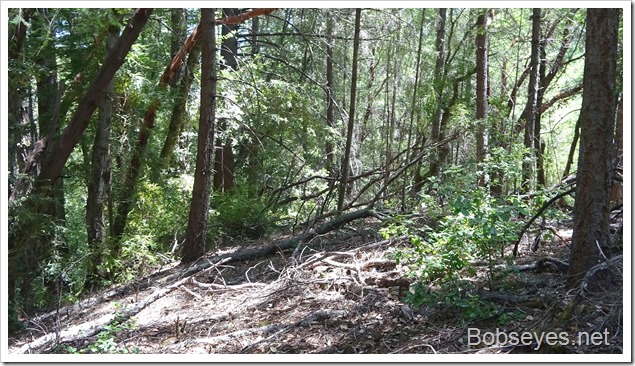 I decided against this ridge top area, not because of all the brush but because I felt the other way I had planned was a better way.

I still  want to check out the other side of the ridge to see if that way might be better, but not today.

Took the trail back

I took the other way back through here which was much easier going. 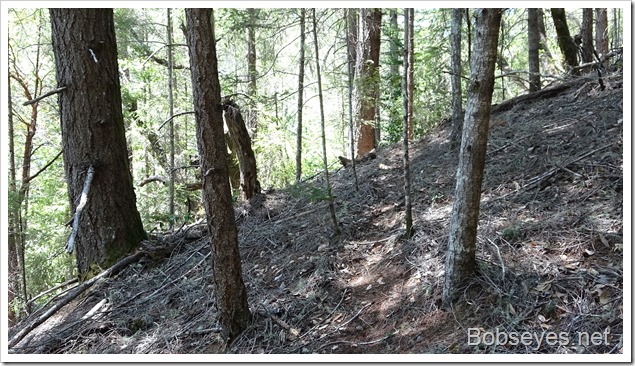 And that way led to this chair which I needed by now so I sat and enjoyed the view and the day for a bit until I was rested up. 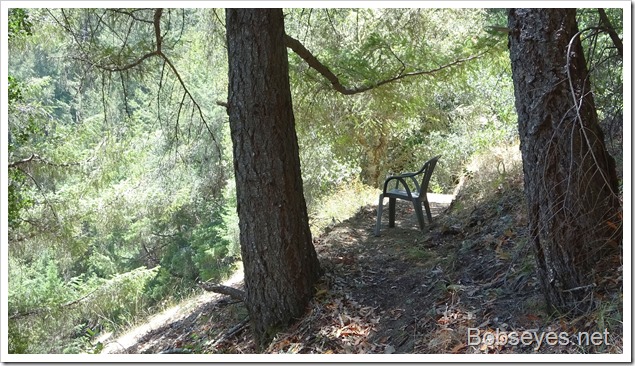 The view from my resting chair. 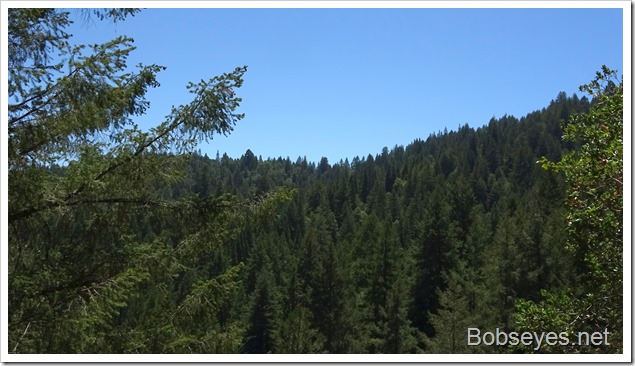 When I got back home I needed a nap and rested up until my bother Tom came home from fishing in the ocean. I’d said I’d help get his truck in for repairs as he needed a ride back home.

I need that grate

Once that was done I needed to get these weeds cut as they were on a wire panel and I needed the panel to help dry some prunes soon, but the darn weeds were holding it down and they were real hard to cut as there was chicken wire under them which prevented easy cutting of the weeds. 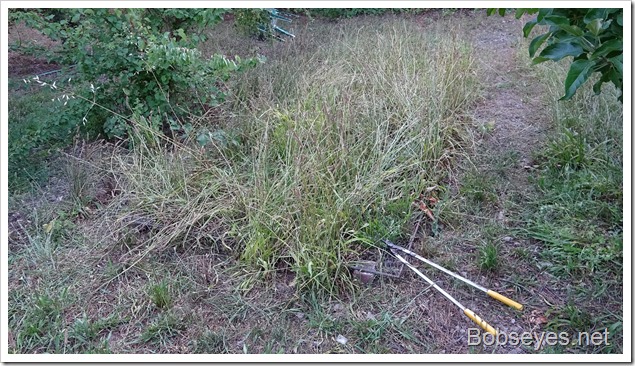 I worked on cutting the weeds but it was slow so I got tired out and ate some mulberries. They tend to do this to one’s hands and can be very hard on clothes too as that red stuff seems to squirt every where. 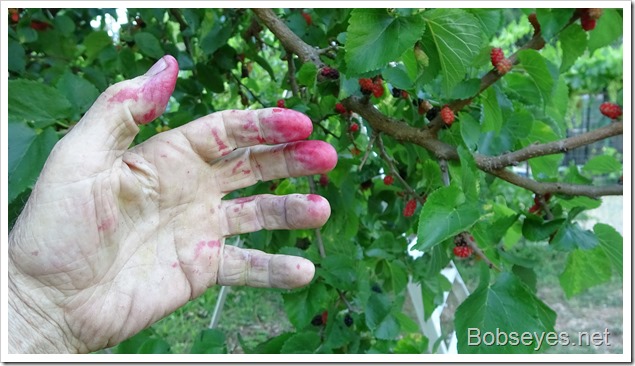 Didn’t get it done

I worked on cutting the weeds some more but didn’t get too far before my back needed a break for the day. A little at a time should do the trick. 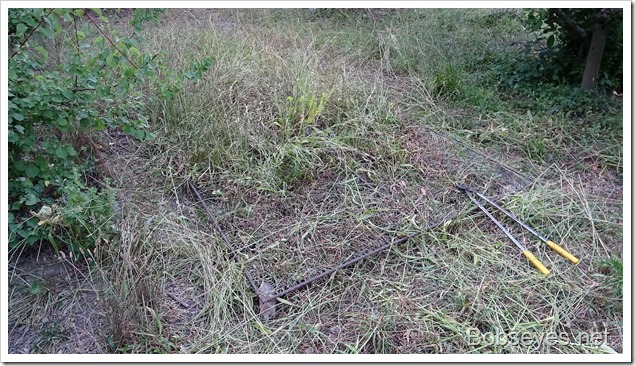