Forest Work and Yes, We Got the Power Back On, Finally

The power guys didn’t get the power back on yesterday, so it was going to be another day of generator noise.

The best thing to do was head on up to the forest to get some peace and quiet, so I loaded the chainsaw and headed on up there to cut more trees off the road.

I also wanted to go by the stuff I cut the other day to look for the chainsaw’s oil cap I lost somewhere.

Right away I ran into another downed tree that wasn’t there the other day. Most of the downed trees are dead ones that have rotted and finally fallen down. I cut this one out of the way, then continued on up the road. 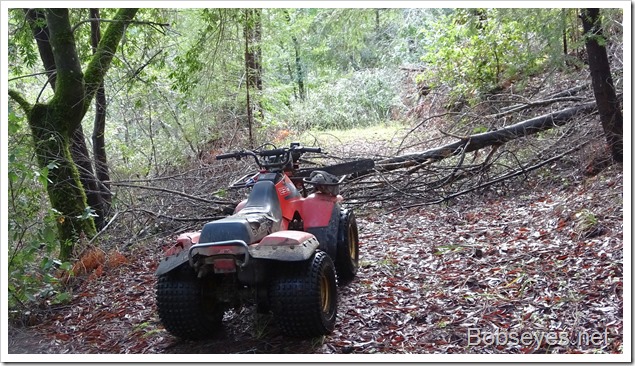 Pitch but no cap

I did a lot of cutting on this fir tree the other day and thought maybe the oil cap was here. 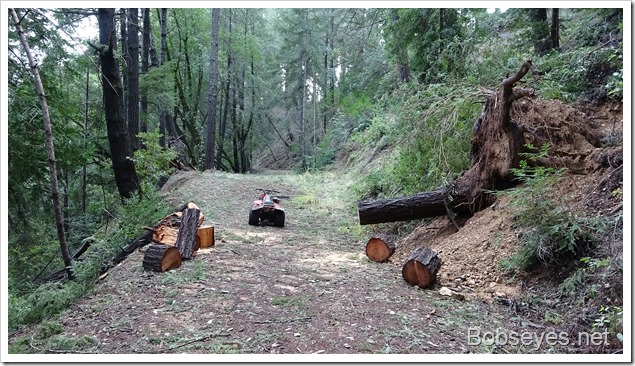 I figure when the oil cap fell out, a lot of oil also drained out of the saw, so I was looking for some signs of oil as the cap should be close to that.

I thought there might be some oil under that log hanging out as it looked like this. To test it out, I stuck my finger in it and I was sorry I did. It turned out to be fir tree pitch and  now I had the sticky stuff on my finger and every thing I did to get it off, just spread it around more. Sticky stuff. I finally had to rub my hands in the dirt and that got most of it off, but not all of it.

Pitch, not oil and sticky stuff. 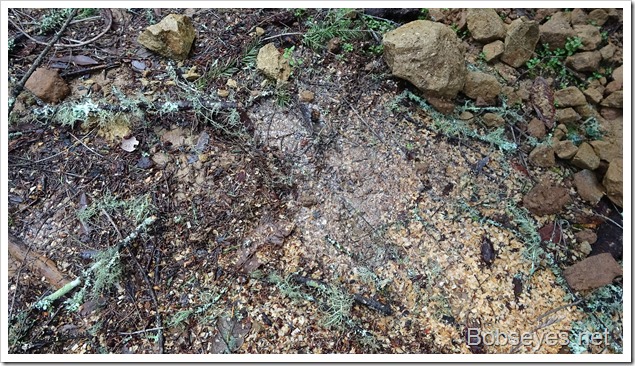 I ran into another small tree and cut it out of the way, an easy one. 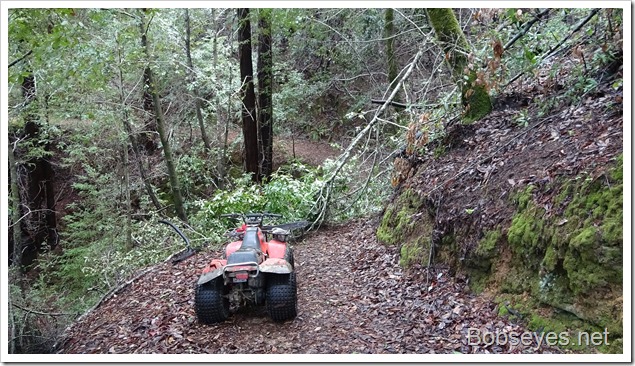 Then I rode on over to the neighbors place where I cut a lot of trees off the road and had a look, but I couldn’t find any oil spots.

I rode on up to the hill top and had a look at the town of Guerneville. The only flooding I could see was in the Korbel’s vineyard. Guerneville was safe for now. 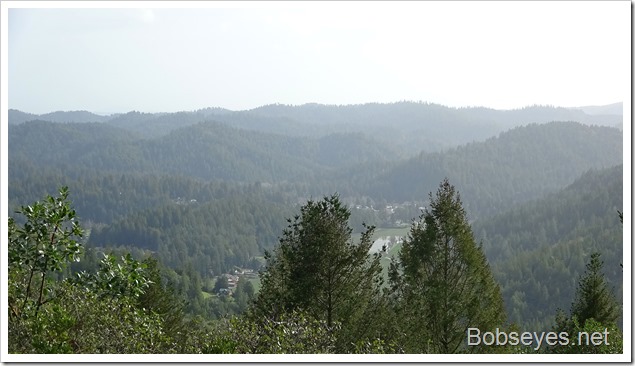 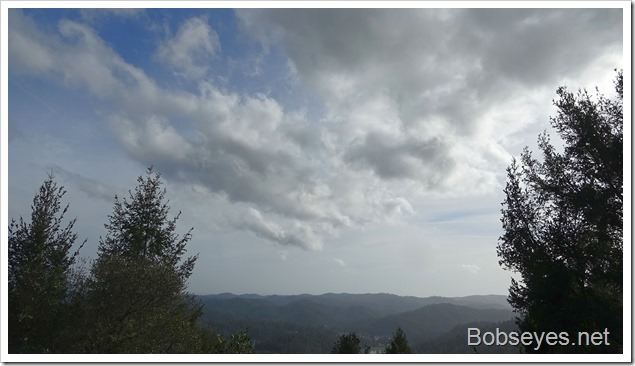 No oil spots so far

I was starting to think, maybe the oil plug came out when I was riding the quad so I had a look under where the chainsaw is and there was some oil by the electric start decal. So maybe I’ll eventually find an oil spot on one of the roads somewhere. 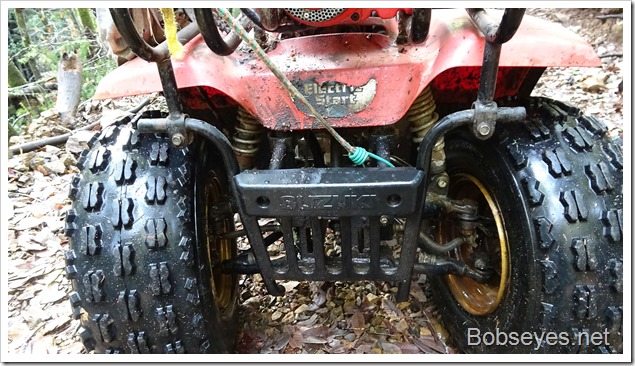 I knew were some trees were down going down to the Oil Can Flat area so I headed down the road going there and ran into this big jumble of trees and stopped and worked on getting them out of the way. I just got most of it sawed when a small branch caused the chain to come off the saw, so that was it for sawing today as I didn’t have any tools to fix it. 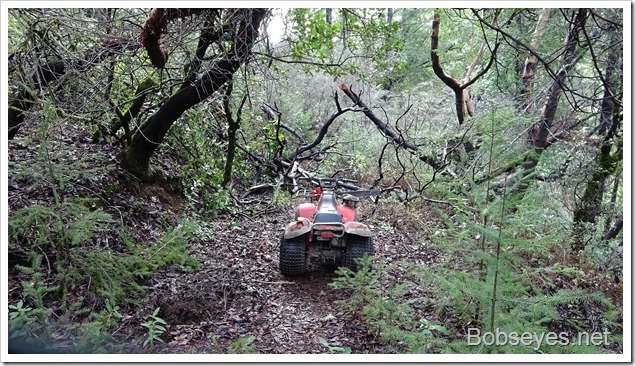 As long as I was down by Oil Can Flat, I went over to check out this creek crossing I’d repaired not long ago. It looked like it was working well and didn’t wash out. 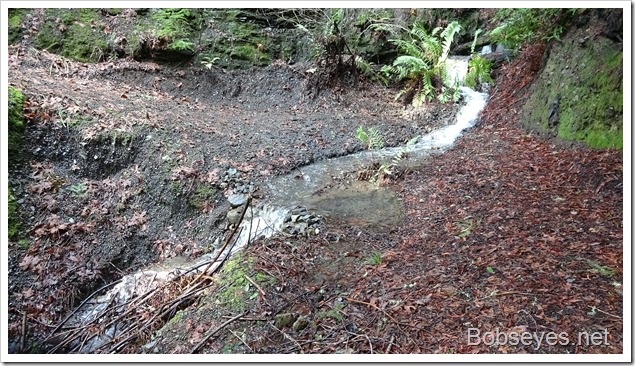 I’d built this rock dam to keep the dirt and rocks from washing out and it was working well. 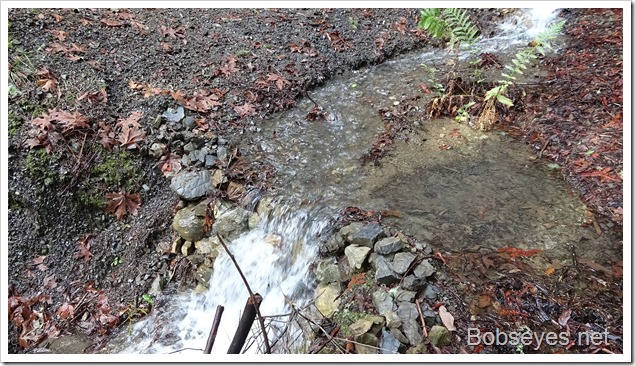 With the chain off the saw, I headed towards home, still watching for that oil spot on the roads, but didn’t find any oil.

I ran into my brother Tom and he said the power guys were out on the road, so I parked the rig and walked on out to see what was going on.

We got power back on

These guys were down from Oregon. Did you get things fixed up yet? They said they did but they couldn’t turn the power on as a local guy had to do it and it should be on soon and it was. 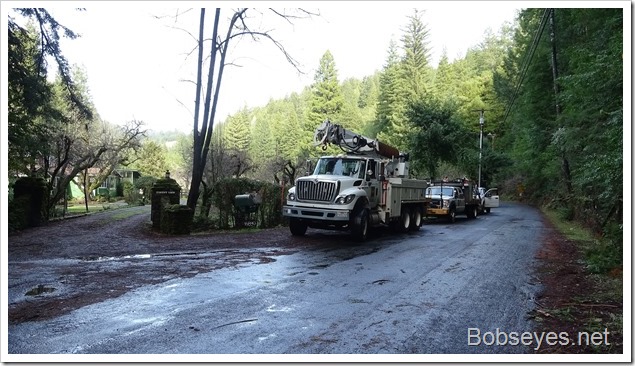 I went back over to  my yard and turned the generator off and checked on the chickens that were doing just fine grazing around the yard.

I was surprised to see the daffodil plants had buds on them that were about to pop out. 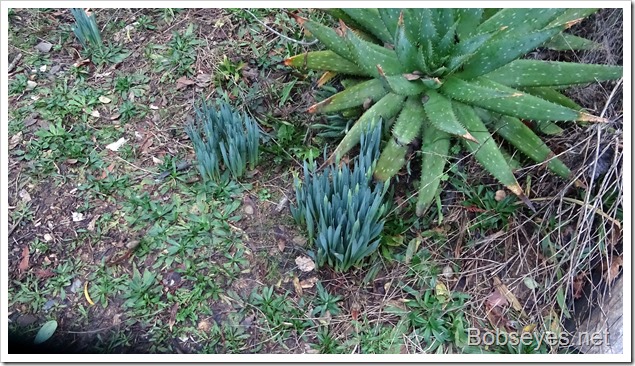 A bit of digging

After that, I went over to Tom’s place and helped him do some more digging in his yard, which we did until almost dark.

1 Response to Forest Work and Yes, We Got the Power Back On, Finally