Forest Work, After the Big Storm and a Boo Boo

It was still raining a bit when I got it going today, but it was turning to light showers.

My brother Tom has a lot of stuff in his freezers and vegetables he has to keep cold so we got the generator going this morning as there still was no power and no one said when we’d get it back. 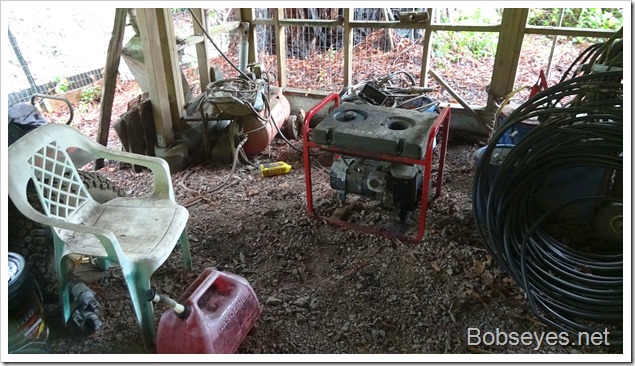 Go for a ride

That seemed like the thing to do today, so I hopped on the bike and rode on up in the hills to have a look around to see what the storm did.

I rode up to the overlook. Town people are likely getting ready for the river to flood, which it is supposed to do soon. 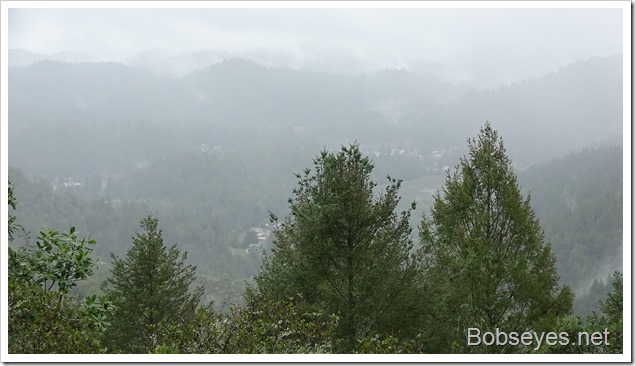 For this area, it wasn’t the rain that did much damage, but the strong winds knocked a lot of trees down. This road has a lot of small fir tree branches down on it. 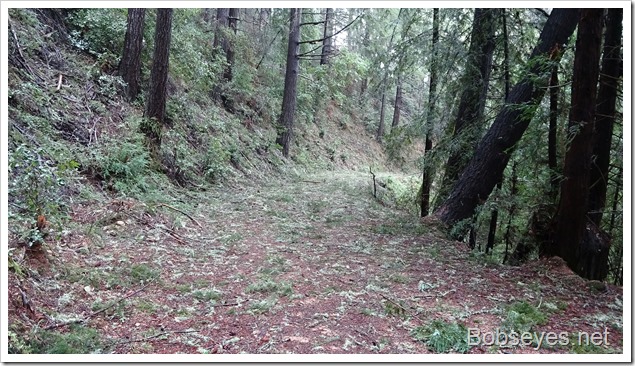 There weren’t a lot of larger trees down but this one stopped me and I couldn’t get by, so I turned around and tried another way. 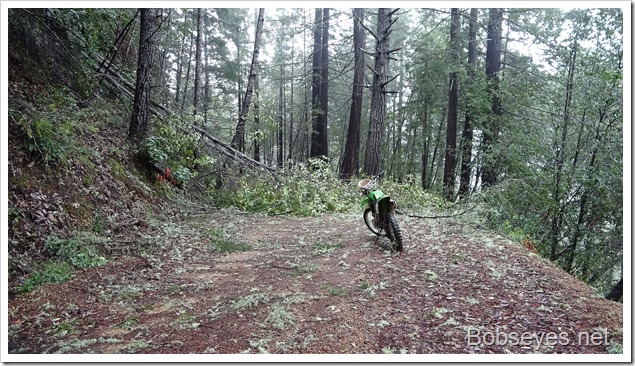 But the other way had some trees down on it too, so I went over to see how this trail faired.

Looks pretty good with just a bunch of small stuff on it. 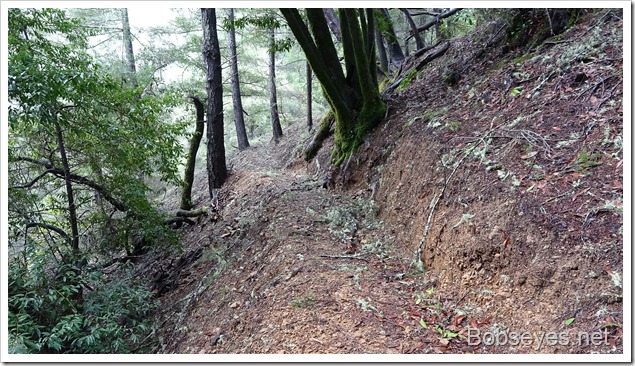 I was going down the road and making a turn onto another road when this redwood limb got in my way and I had no time to avoid it. The problem is if you hit one sideways, the wheel slips out and you go down as I did. Things sometimes just happen too fast. 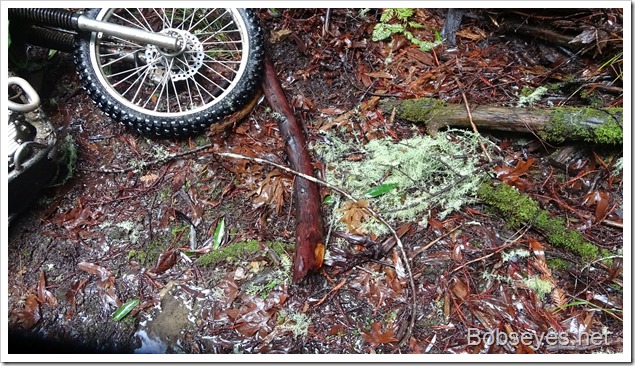 I wasn’t going fast but the bike just tipped over on my leg and I were pinned a bit. 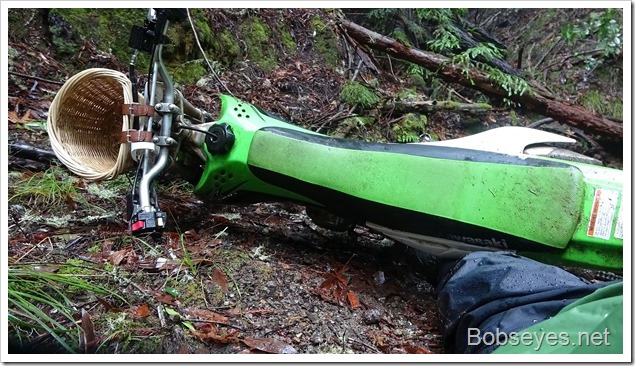 The bike had my foot pinned under it and the hot muffler was on it, but at least I wasn’t getting burned, thanks to my shoes.

Now, older bodies don’t like this kind of stuff much and it takes a bit of time to get it together, aches and pains, you know. After about a minute or so, I was able to get my leg out from under the bike and stand up.

Now, I had to get the bike back up, hurting body and all, but I did it. 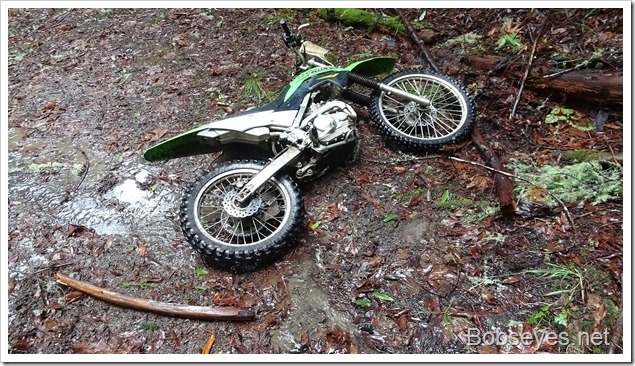 I continued on down to a trail above the waterfall and checked it out for damage. The trail was fine. 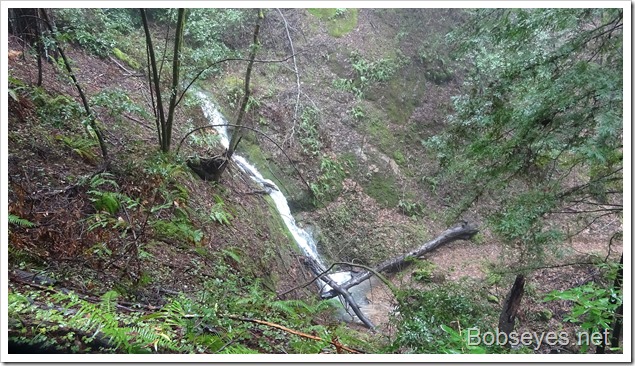 I decided I needed a chainsaw, so I  headed for home to get one, down this trail, but I had to stop to get some redwood sticks off the trail. Not taking any more chances as I hurt enough already. 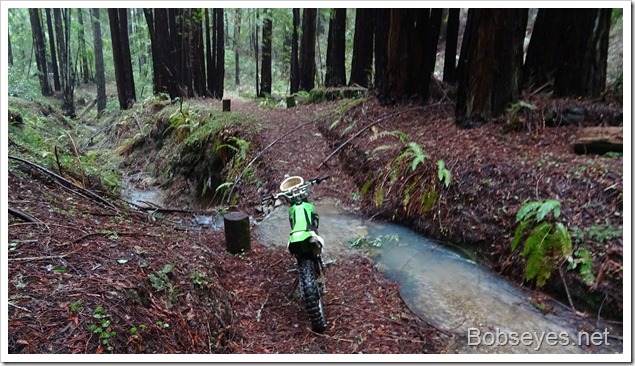 I had to ride over this, but I’ll be back to get it with the chainsaw. 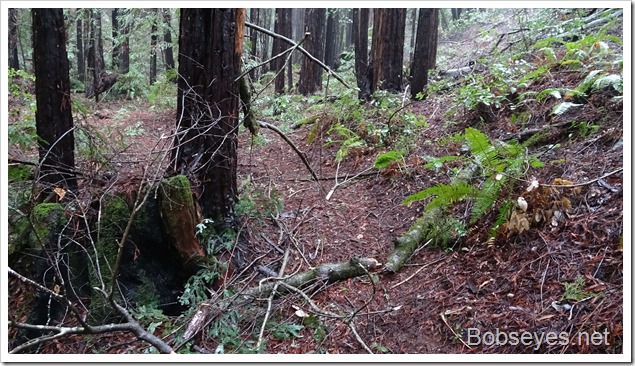 I put the saw on the quad runner and rode on up into the hills and started with this one. 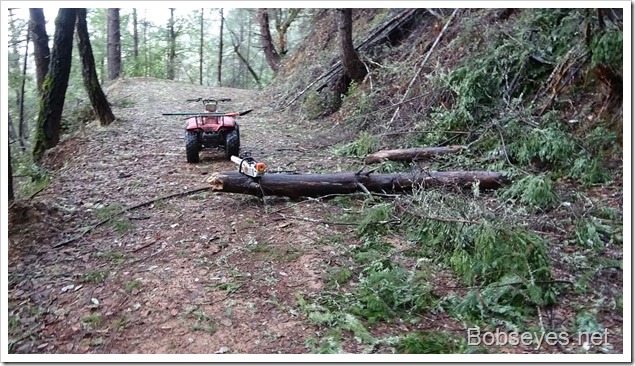 Next was this one which took some time as it was a bigger mess. 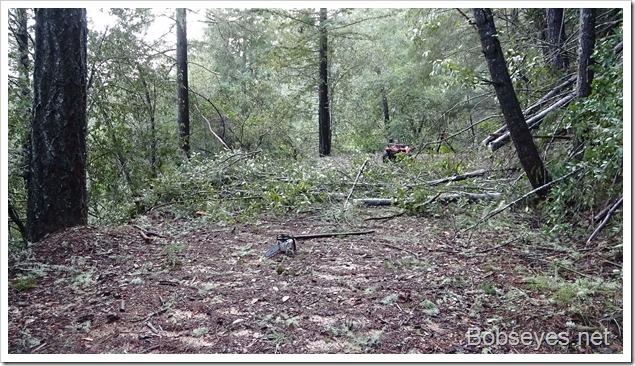 My back was starting to scream as I got to work on this mess. 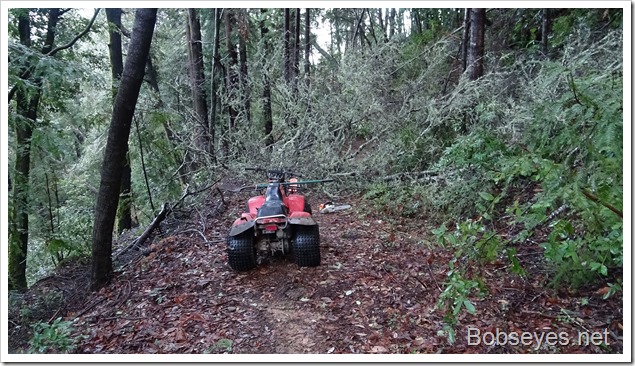 I could  barely move after getting this one off the road. 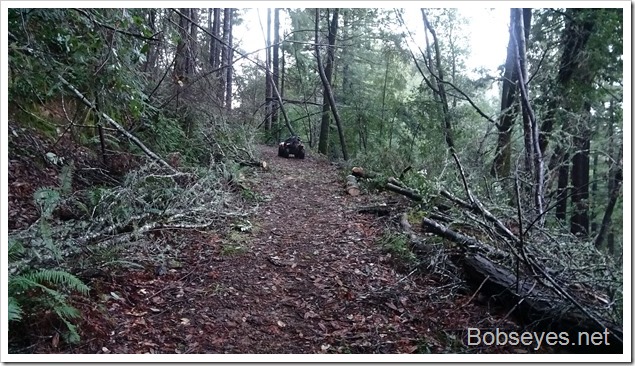 I headed for home after that one, but had to stop three more times to cut smaller stuff up. It got fairly dark on me before I made it home.

Still no power and still no phone, so no internet, but I use my brother’s cable.

(Visited 153 times, 1 visits today)
This entry was posted in Uncategorized and tagged Dirt bike ride in the rain, forest road work after the storm. Bookmark the permalink.

3 Responses to Forest Work, After the Big Storm and a Boo Boo