Forest Fire Is Out Except For the Mopping Up Part

It was real smoky when I went outside this morning. I could hear something big roaring up Sweetwater Springs Road so I went out to see what it was. They call these things macerators. They cut brush and trees. They grind them up. 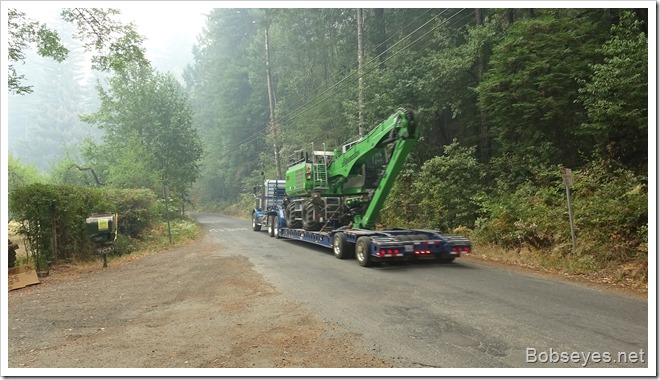 They are moving the mop up stuff in and maybe some rehab stuff to start cleaning up the mess. The fire is basically out in our area but there are still a lot of spot fires they have to put out and cleanup which they call mop up.

I wasn’t sure what I was going to do today as everything about the fire was changing, from fire fighting to mop up. The fire fighters that were here left and new fire guys were coming in to mop up.

It was pretty cold this morning and I  had to wear an extra shirt, especially when I hopped on the dirt bike.

I decided to go up through  my neighbors place to get up into the hills today. I had a hard time on the road as it was soft dirt and dusty. I worked at it and got up the hill and soon caught up to why the road was so soft and chewed up. I’d been following 3 fire trucks and this fuel truck or it might be a water tender which supplies water to the fire trucks when they need it. It’s real smoky this morning. I continued following these guys holding back a bit to avoid at least some of the dust. 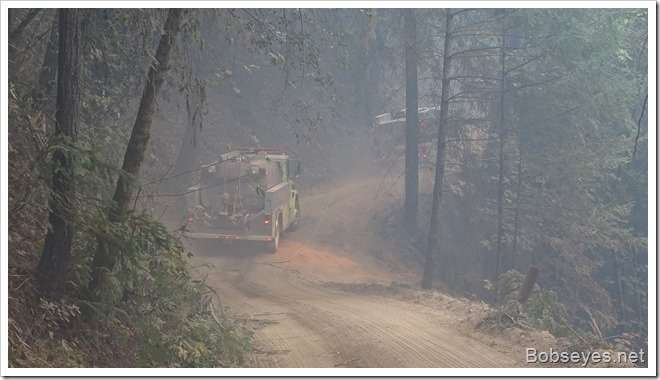 I made it to what we call the turn around where some mop up crew where parked and sorta watching this little spot fire that sprung up. These are the kinds of things the mop up crew deals with putting them out 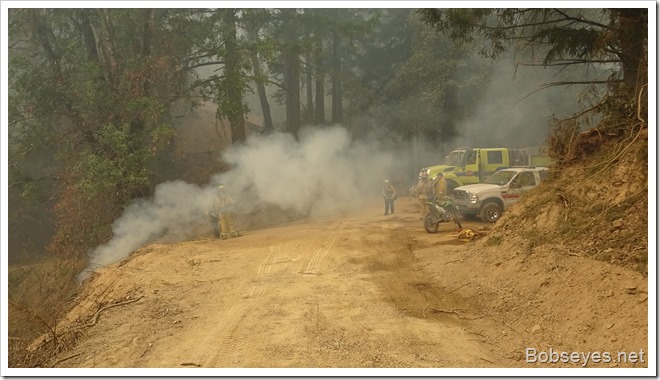 Chatting with Robert’s gang and a big hug

From there I rode on over to the Robert’s place where I got a big hug from his wife that had returned home. I chatted with them for a bit and then rode out to say high to Robert that was on his tractor fixing some roads up. After shooting the bull with him I rode down the road towards the park and headed for the bridge that had a log fall across it to check things out.

This area is above the park floor and looks to me like it got hit the hardest or at least one of the hardest places that got burned as several big trees came down knocking down other trees. This is just before I got to the bridge. 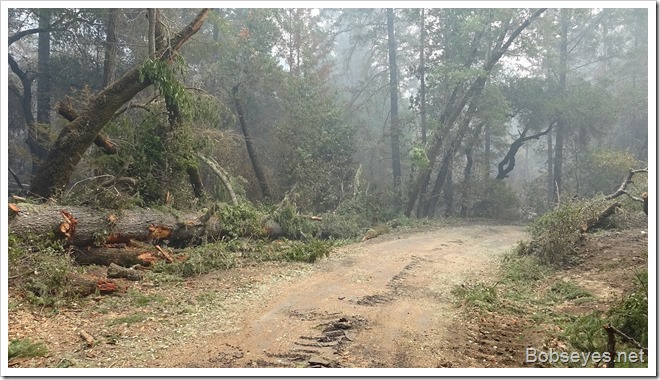 They’d cut the 3 foot log off the bridge and cleaned up a bit. 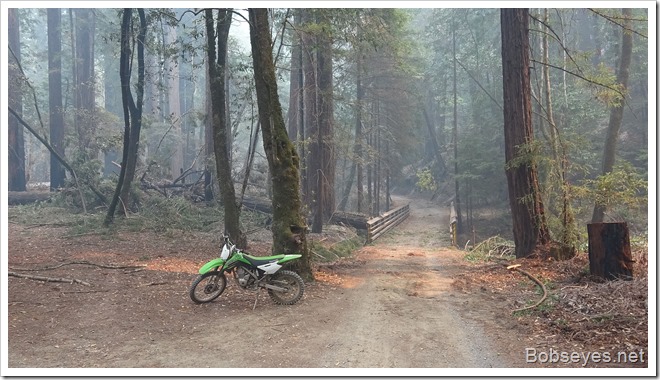 This is looking up the creek from the bridge showing some of the downed trees. Smoky eh. 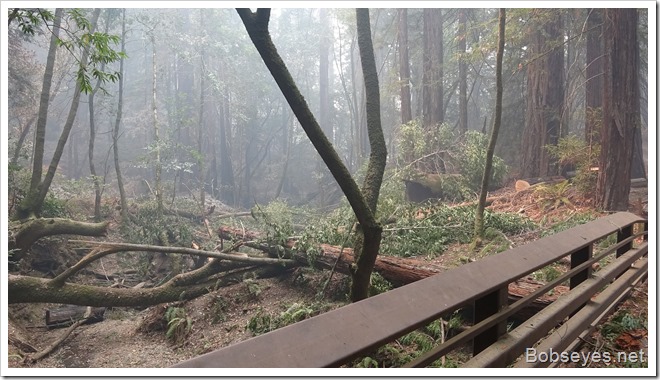 This was looking down the creek. Note the bent steel rail that the big tree fell across. 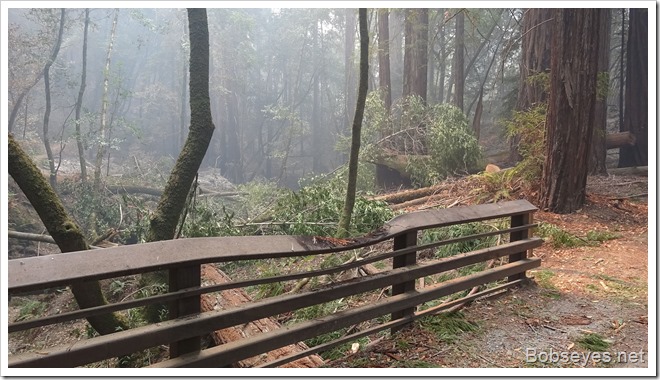 This is looking up where the trail goes up the hill. Several trees got fire in their bottoms and fell  over knocking other stuff down. 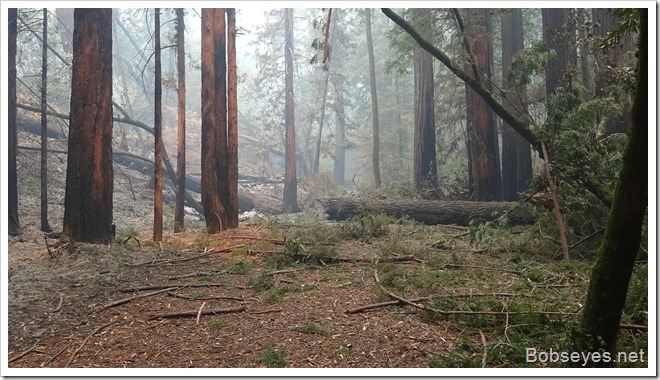 From there I rode on down into the main park area which looks like this. Not much damage. 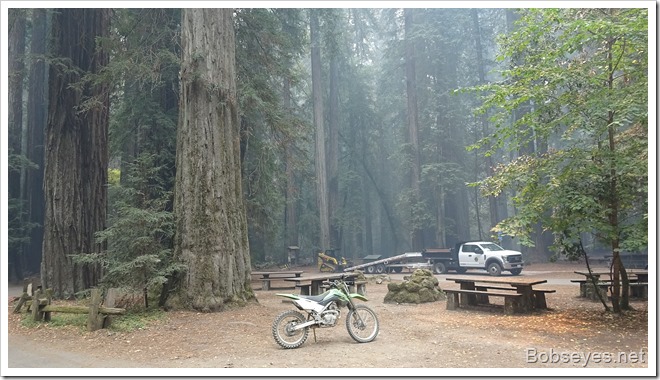 This was the most damaged area but the fire didn’t burn those downed trees. I think they were too close to the road so they took this opportunity to clear them so the road didn’t block big trucks. 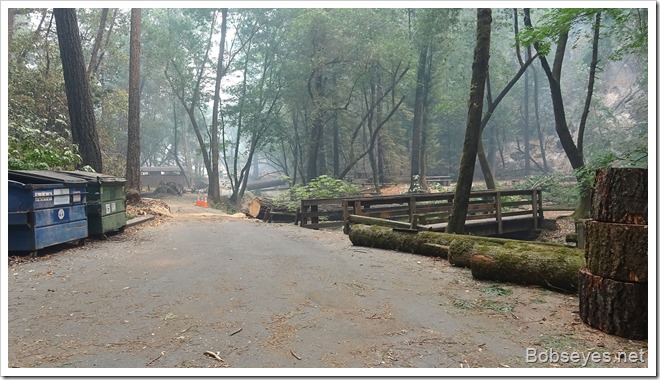 I headed down the road towards home and ran into this truck doing some mop up in the park. 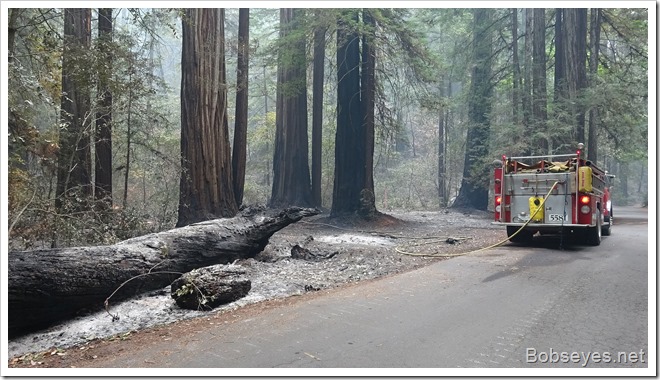 At the parking lot in the park front I waved to the park captain as I went by and he waved back.

Back to the house

I was pretty tired out from all the exercise I’ve been getting. Nine days or so of riding that dirt bike around the hills gave me plenty of exercise. It’s actually made me a lot stronger and I feel great except for being tired out.

I took care of my chickens and napped and did some planning and visiting when neighbors came by. 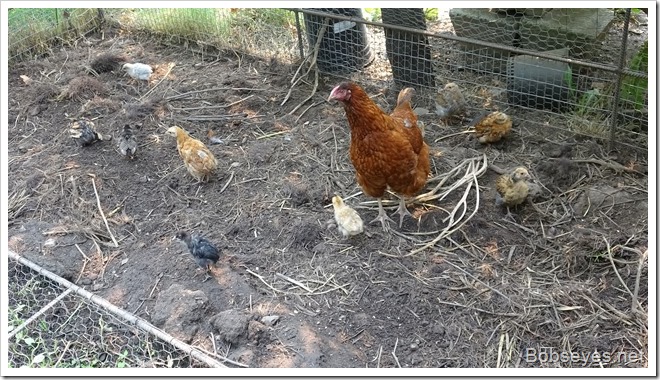 Late in the day I heard something going up into the hills so I decided to take a dirt bike ride, just up and back keeping it short.

It turned out to be the fuel truck or water truck. I never did figure out which it was, but no matter. 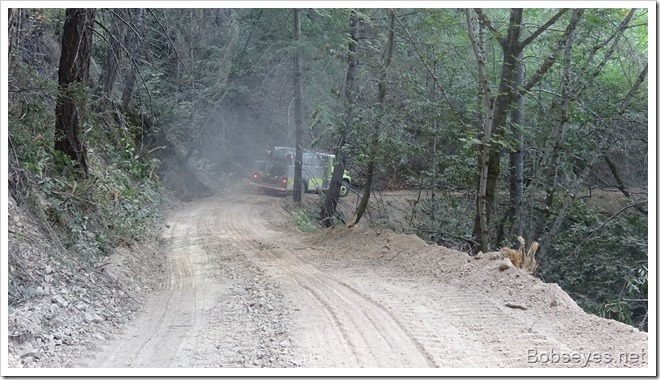 I followed behind him for a ways until he saw me in his mirror. He stopped and let me ride on by.

I made it up the turn around where I was this morning. There was another new fire crew there from Sebastopol. 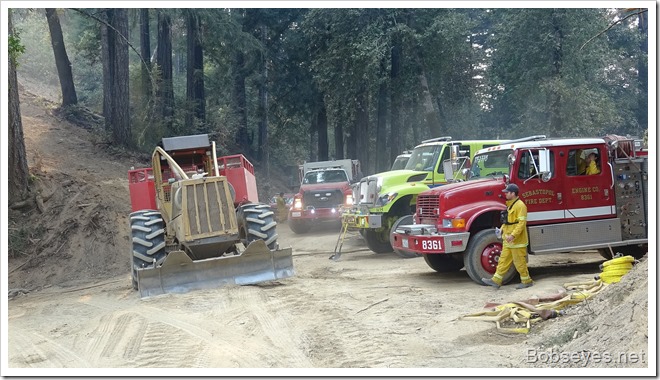 I started chatting with one of them and he asked where I lived and wasn’t sure about me. But then he said his name was Castleberry.

Ha, I got him. I went to school with his mom and dad. He was all smiles when I told him. He’s talking with a commander here. 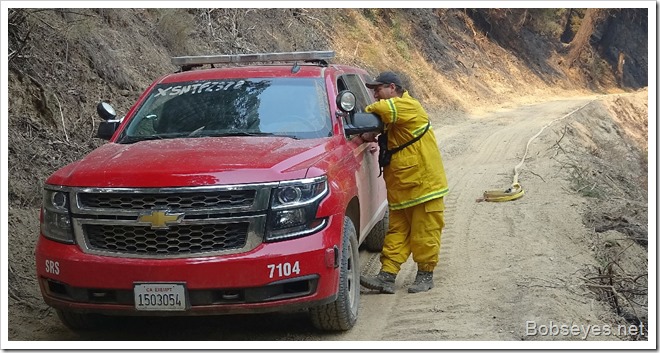 Here’s another shot of the spot. 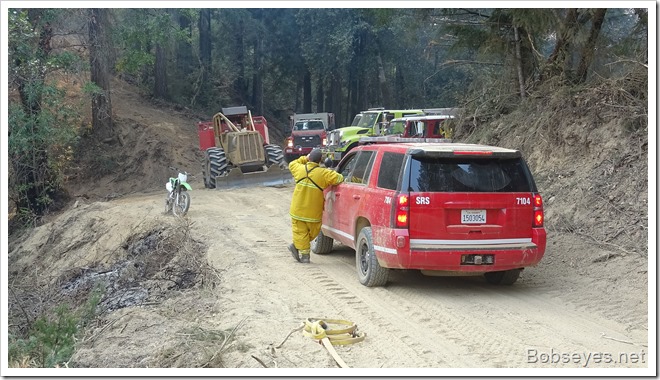 I was looking at the four wheel drive fire truck. It’s a log skidder with a special tank installed on it to get into the hard places which most of this area is. 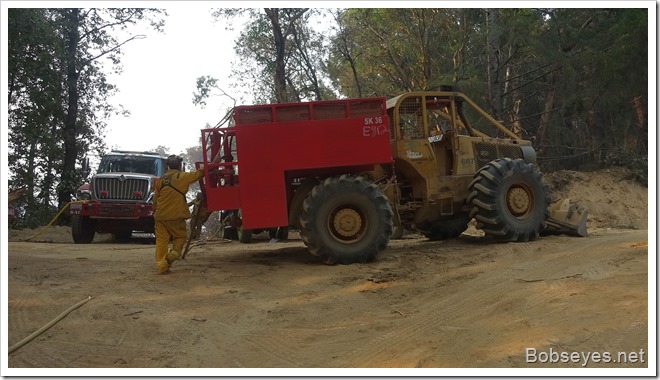 He took off somewhere.

The fuel truck that let me by showed up and parked. 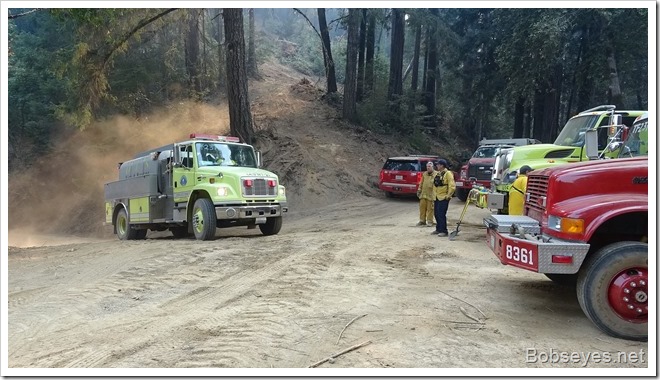 I rode down the road a bit and heard something coming so I pulled over. The dirt bike is good as I can get out of the way of the fire guys and not block the road. He was headed down the hill to refill with water. 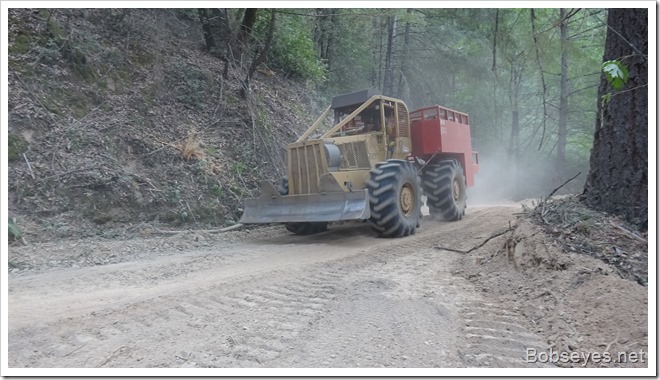 I rode on down through our place checking out some of the fire break area that will need some clean up work before winter.

Then headed over to our water tanks to check the water level. They were full to the top which is good.

I spent the rest of the day chair hopping around the yard doing not much and that was it for me today.

Nice day as the fire is out except for mop up.