Forest Fire Is Bearing Down On Us, But Then the Wind Changed

Last night I was up late keeping an eye on the approaching forest fire that was started by lightning a couple days ago.

About three in the morning my neighbor came by and said come look at this, so my brother Tom and I followed him over to his house where we could see flames peaking a ridge top a couple miles north of us.

It looked like it was burning good but staying to the north. I said to my neighbor is he sees it come down about half way come over and let us know. We shot the bull for a bit then went on home but with all the excitement I didn’t get much sleep.

Checking on the fire

In the morning I went over to the neighbors to have a look and see how far the fire had come towards us.

Looking over my neighbors place it was looking like it was getting close about a mile away. The wind was blowing our way. 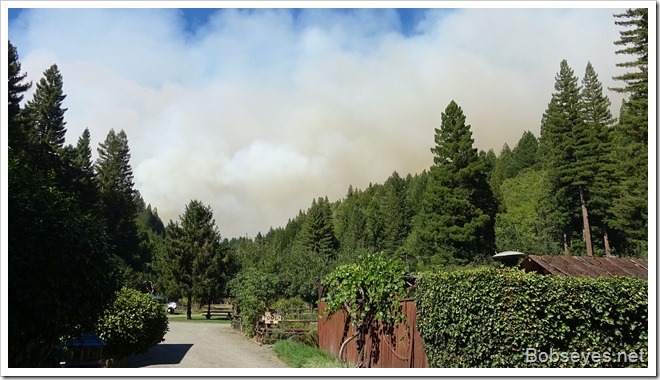 Shortly after that a bunch of fire trucks showed up to see about protecting our houses and properties. They had some good suggestions which we worked at. I wanted to blow off my roof of debrie and I did some other stuff. They moved on up the road and said the fire could be here within the hour. Lucky they were wrong.

Dirt bike ride up the hill to check out the fire

I needed to use my brothers air blower but he was using it so I hopped on the dirt bike to ride up into the hills to see how the  fire was up there compared to what I saw yesterday.

I checked the water tanks on the way up and  they were half full about ten thousand gallons which should be enough to fight this fire if it gets around our houses.

Once I made it up into the hill tops I was happy to see the fire from yesterday didn’t burn east towards us but went north which was a good thing but still dangerous to us but at least we won’t be hit from more than one direction which is a real good thing.

As long I was up there and most of my neighbors were evacuated I rode around a bit on some neighbors places to check things out before heading back down. Might as well have a nice dirt bike ride while you can as  I usually can’t ride on most of the neighbors places.

I made it back home and gave my neighbors a report of what I saw.

Lot’s of noise down the road

I heard a bull dozer operating just down the road from us so I went over to see what was going on. They were cutting a fire break across the valley to protect the fire from going to Guerneville. I shot the bull with those guys for a bit and we passed what information about the fire we knew to each other. 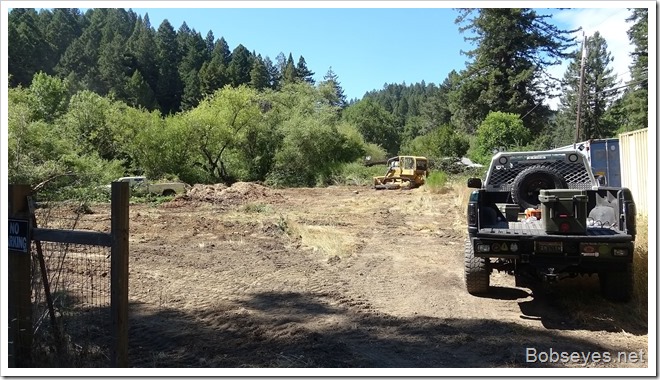 The fire was just north of us making these big smoke clouds. The wind was blowing our way which wasn’t good. 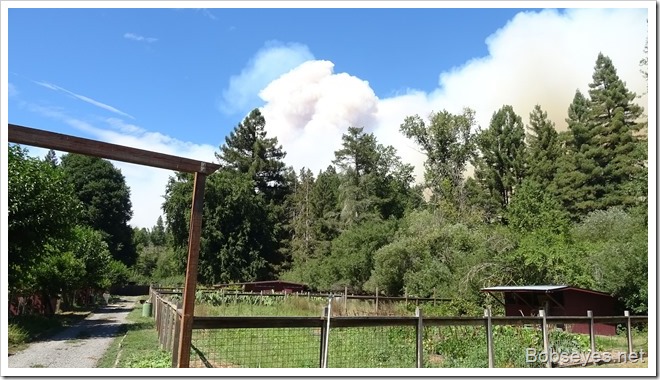 But just after noon, the wind changed blowing up the valley away from us and a lot of the smoke clouds blew out which showed the fire hadn’t got as close as they thought it would. There were lots of fire fighters up in that smoke working away for us.

You can see the big smoke clouds have blown off, but there’s still plenty of smoke. This all  meant the fire was going around us so we had a chance. This is looking over one of my brother’s gardens. and to the north. 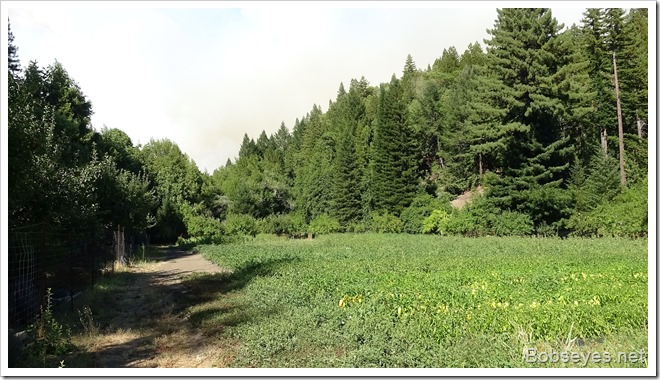 We were fortunate the wind had changed and saved our butts. Other people would have to be concerned about getting burned out but for now things are looking good for us, just before dark. 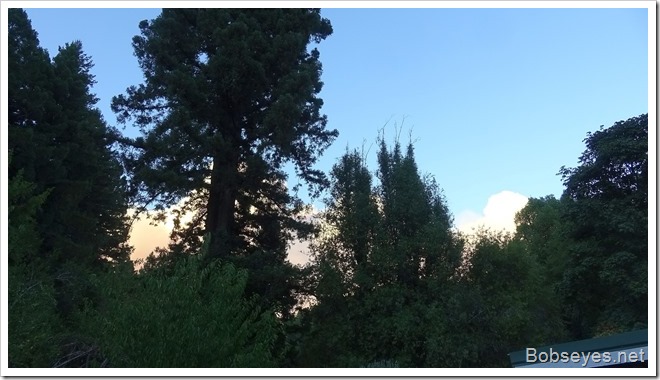 There were fire trucks and bull dozers going by and big water trucks with extra water for the fire trucks so lots of excitement for sure.

Not sure about the hermit

My hermit friend I visited the other day that lives up behind the state park, his house was not in a good location as far as the fire goes as it went right through that area. I think someone would of gotten him out but I have no idea if his house faired well or poorly. It’s probably a couple days before things calm down enough to find out what his fate was.

As for our fate things are looking good right now but there’s still at least a small possibility the fire can come around from another direction but I think we are good. At least I hope so.

Nice exciting day but not too exciting.

5 Responses to Forest Fire Is Bearing Down On Us, But Then the Wind Changed