The wind was down today for a change so I went on down to the river for a paddle.

I put my boat in the water noting the fog was waffling around and trying to come in.

Getting ready to put in at the boat ramp and looking at the fog down where the ocean is. 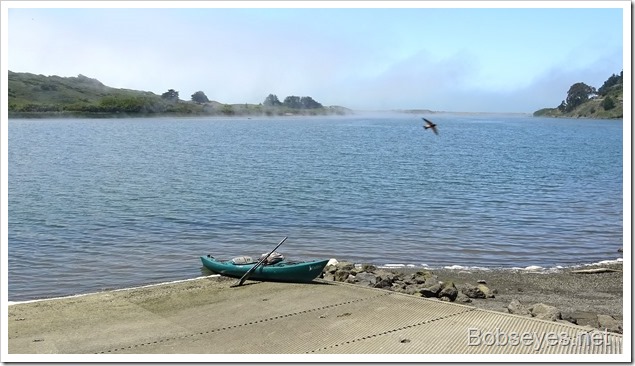 Headed for the ocean

My plan was to paddle down towards the ocean to have a look around so I paddled across the river and started down that way going by this great blue heron fishing. 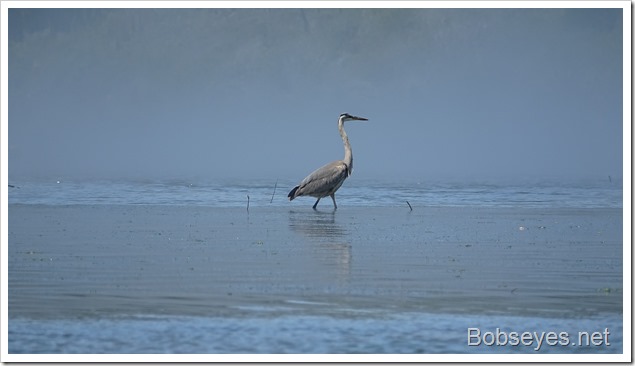 And I pasted by these two birds feeding along the river’s edge. 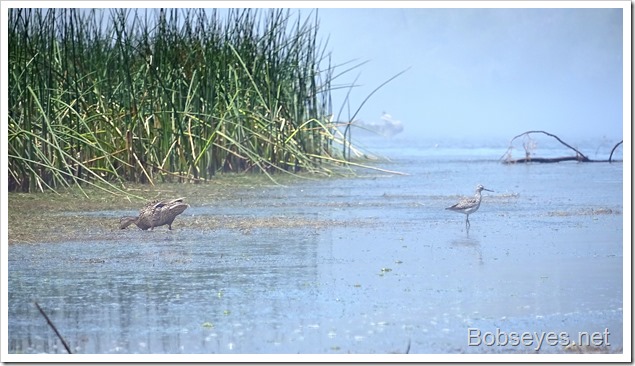 Too foggy to see

But just gong a bit further I noted the fog was thickest and getting thicker where I wanted to go especially on the right there. 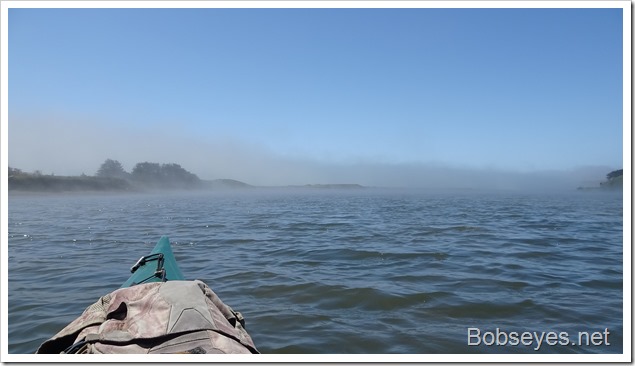 Since I wouldn’t be able to see anything once in the fog I changed my mind and turned around and headed up river instead, going by Penny Island on the right. 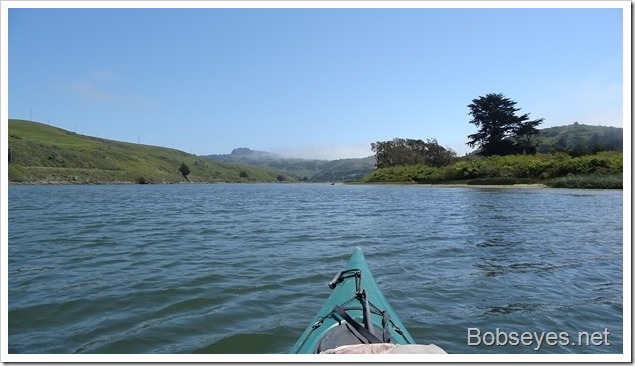 That fog was moving in and out so I didn’t escape it as I paddled along. 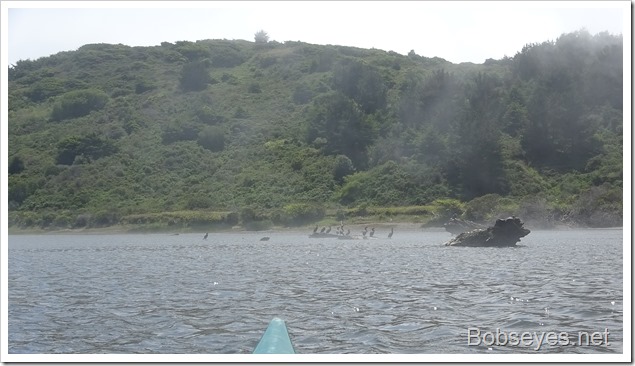 I spooked these cormorants as I went on by. 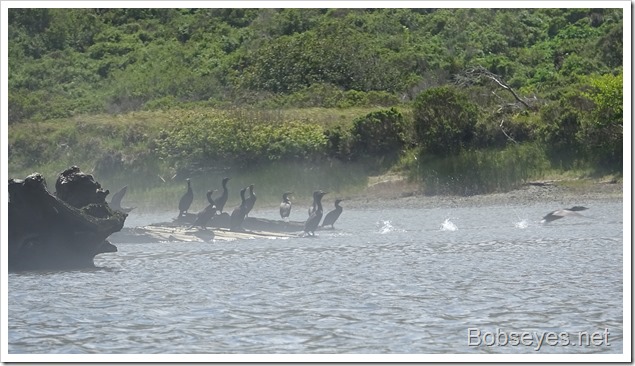 With the fog moving all around I decided to go for a hike up to that rock on the hillside which I call Swamp Rock. 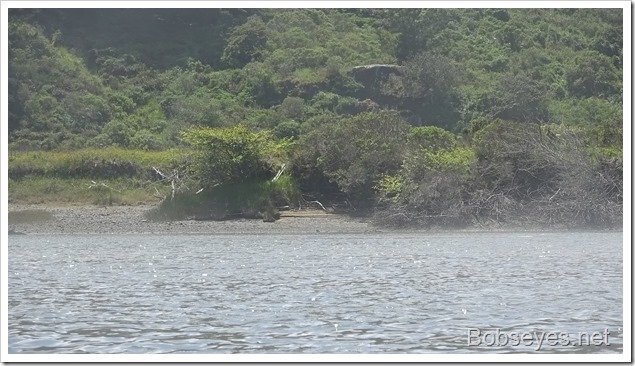 I found a place to land at the Swamp Rock Beach and landed and went to shore. 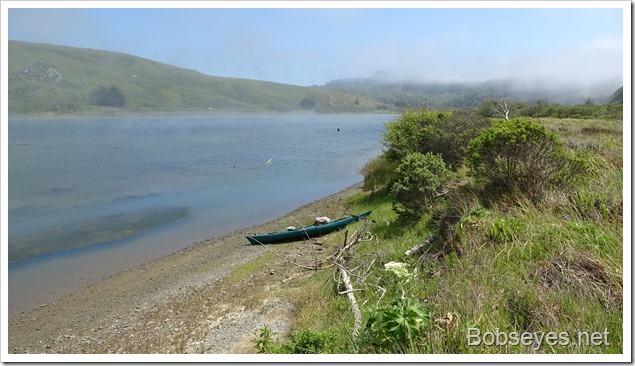 I was hopping the swamp had dried up by now,……But.

I had to cross this swamp area which at first looked encouraging like it had dried up. 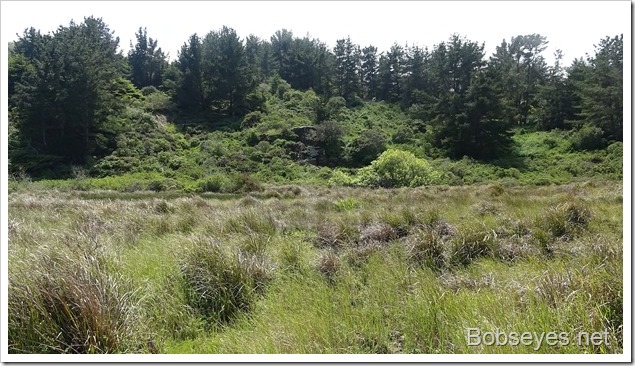 I found the trail to get to Swamp Rock but on the way I ran into this water which blocked my way unless I wanted to get wet, which I didn’t. I hunted for a way around the water but couldn’t find one so had to abort the rock idea. 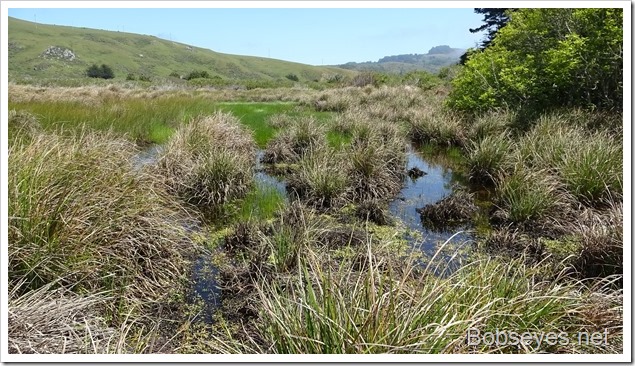 Now this is an interesting area as if you don’t know where the trail is or can’t find it you aren’t getting out of here. It’s a fairly easy trail to find on the way in, but finding it again to get out isn’t so easy. I thought I knew where it was and went to that spot but I was wrong. 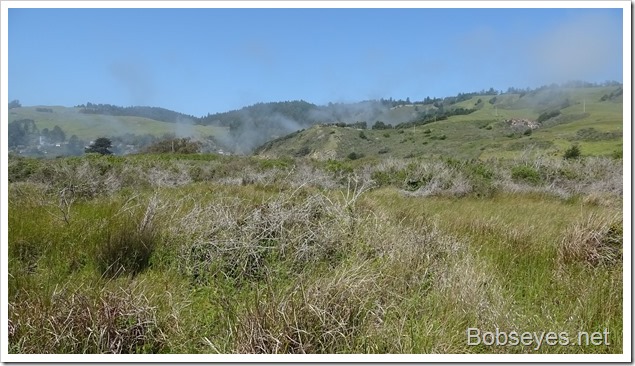 This had happened to me before so I had an idea where that trail was and looked a bit more and found it, otherwise I wouldn’t be writing this blog. :O)

I went by this big spouting fern coming out with the new stuff for the year. 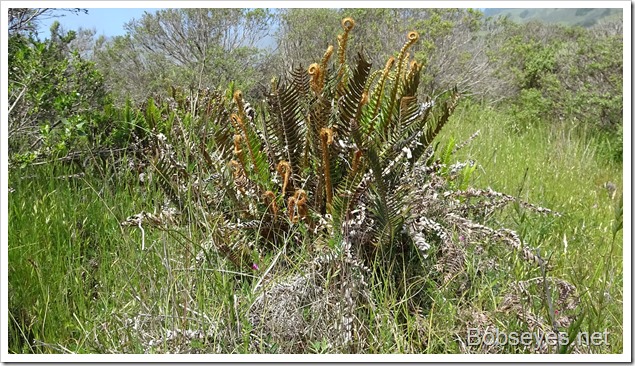 When I got back to my boat I noted the fog had moved in even more looking down towards the town of Jenner. 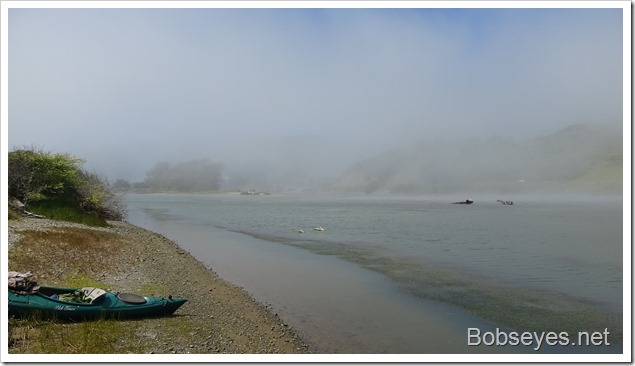 Since I didn’t get far on my walk I found a nice place in the grass by my boat and had a good rest for about an hour.

That gave the fog some time to move out a bit and I headed on in to the boat ramp at Jenner. 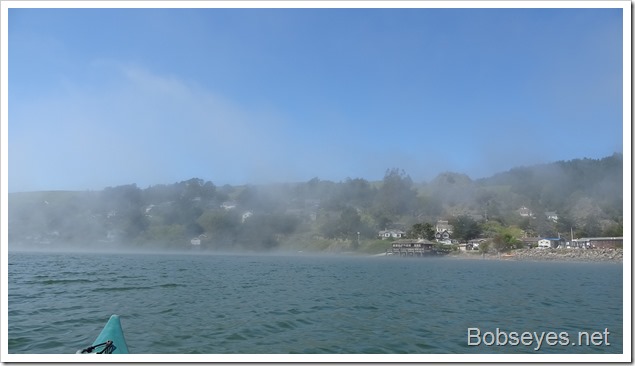 I  made it to the boat ramp and loaded up and went on home where the sun was out and it was nice and warm. The fog can be a bit on the cool side.

Even with the fog it was a nice paddle and even a nice little walk.