Fixing Stuff and the Strawberry Reward

Once I got it going today, well after sitting around in the yard doing some chair hopping I decided to do something I thought would be an easy fix.

Just replace the burned out bulb for the brake light………………but.

It wasn’t so easy as it wasn’t the bulb that was out. The wire that headed towards the brake peddle switch wasn’t getting any power when the brake pedal was pushed but the other brake light on the other side of the car was working just fine.

I got out my tester and tracked things down as much as I could but the wires disappeared into the bawls of the car and I didn’t know where they came out so I checked things on and off all day looking at the manuals too but never did get this fixed.

I decided the easiest way to get this fixed is just to run a new wire from the side that works to  the side that doesn’t, maybe tomorrow.

That’s the tail light on but I never could get the brake light on. 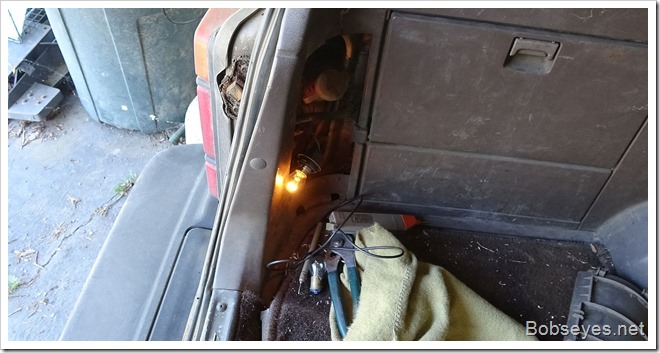 Since I wasn’t doing good on the brake light thing I put it aside for a bit and drove up to where our bulldozer is parked. My brother Tom said it won’t start again after I replaced the fuel shutoff solenoid. He was able to run it for 4 hours after I fixed it but when he went up to use it again it wouldn’t start.

I got my tools out and drove on up to the dozer. 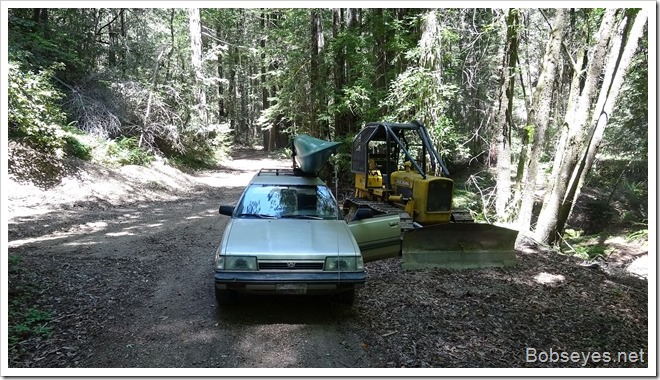 I suspected the fuel shutoff solenoid I replaced went bad but it didn’t which I found out by measuring it. After a bit of detective work I found out there wasn’t any power coming from the key when it’s on. I had to take some stuff off to get to where I knew there was an electric connector and unplugged it and plugged it back together and tried the key and it started so I put it all back together. 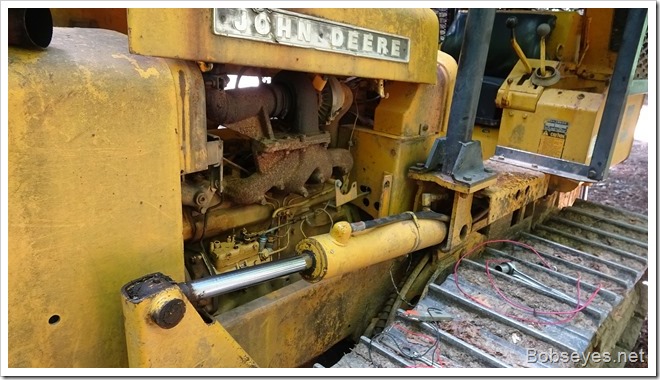 On the way home I stopped at my brother’s garden and walked on in. 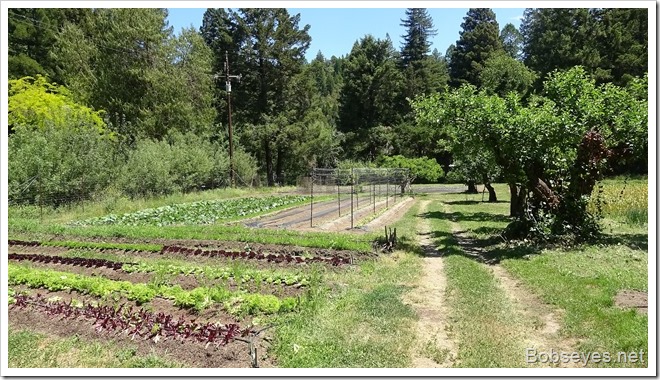 Of course I was headed for the strawberry patch for a reward for my work. 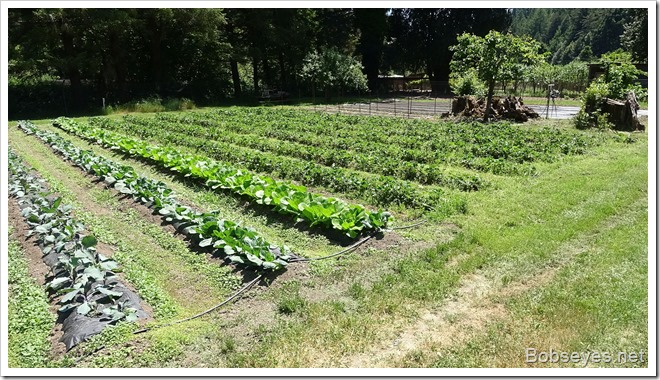 His strawberries are really coming  on and I ate a few. :O) 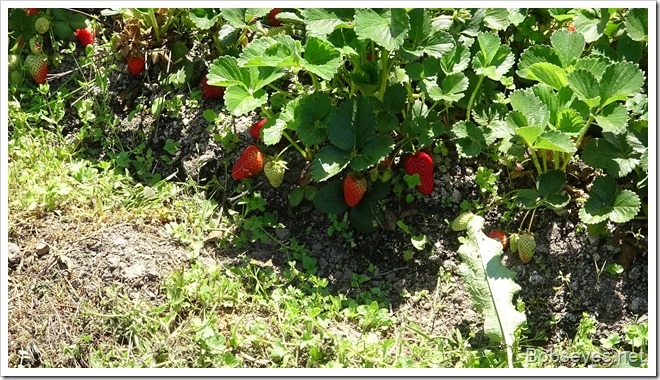 Back home I took a break and did some chair hopping then worked on the car problem some more but still couldn’t fix it.

After some more chair hopping I decided to fix one of the chicken nest boxes. 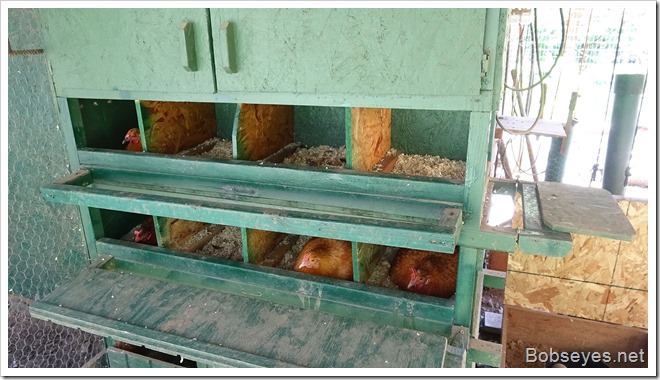 They don’t seem to like to use the one on the end there that is open on the side. 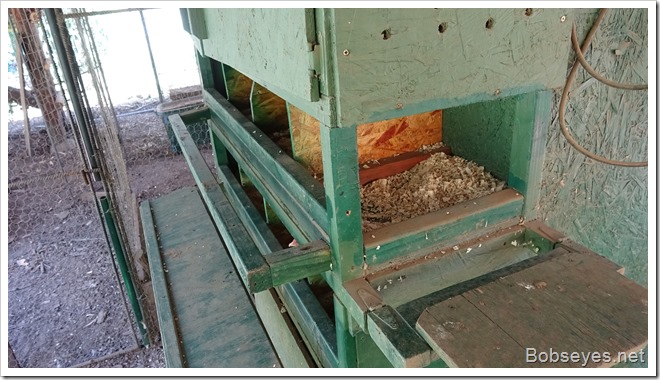 I’ve been having a little problem with some of my hens as they’d like to hatch out some eggs and have little guys. When they do this it’s called broody and they sit on the nest all day and also at night instead of on the roost.

What this does is jam up the nest boxes and makes it hard for the chickens that just want to lay an egg.

I have 56 eggs in the automatic egg brooder so I don’t really want any hens making their own chicks. I take their eggs away each day and at night move each one from the nest box to the roost to hope to break them of being broody. All the eggs under each hen aren’t  their own as other chickens also come into the box and lay eggs for the broody hen to hatch out. It’s how they get their eggs fast for nesting.

Anyway here’s my repair made out of smelly cedar. 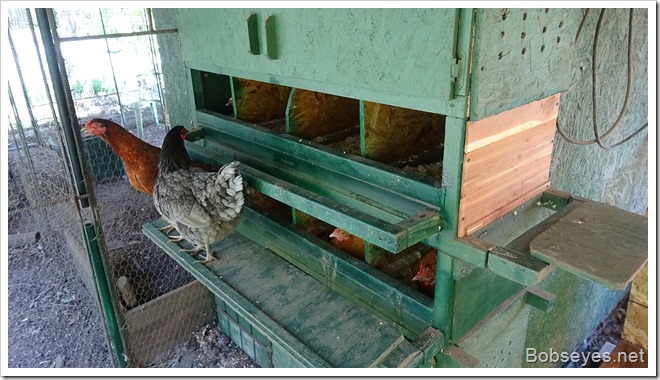 Dirt bike to the water tanks

In the evening I jumped on the dirt bike to go check our water tank’s water level as Tom is using a lot of water for his newly started vegetable plantings.

The tanks were down another foot from when I checked them last time about the same time.  The level varies around during the day so what I look for is the level continuously going down or up or staying the same each day. Right now I think it might be going down each day but not sure so I will watch the tanks for a few days and see.

That was pretty much my day for a good one even if I didn’t get the car fixed as least I think I know what to do. Seems I sure keep busy fixing stuff all the time.

1 Response to Fixing Stuff and the Strawberry Reward