Fixing Ray’s Rusted Out Lawn Mower, Cherries and the Reason I Need to Raise My Own Food

This morning I received an email from Ray asking if he could bring his lawn mower up so we could put some braces on it. The mower body was mostly rusted out from using it for so long. It was all rusted out around the motor and the motor was sagging down.

It was supposed to rain some today so I thought it would be a good time to do his project. I emailed him to bring the mower on over.

I went outside and was sitting around trying to get it going for the day when Ray showed up in his new truck which I did manage to get a picture of. 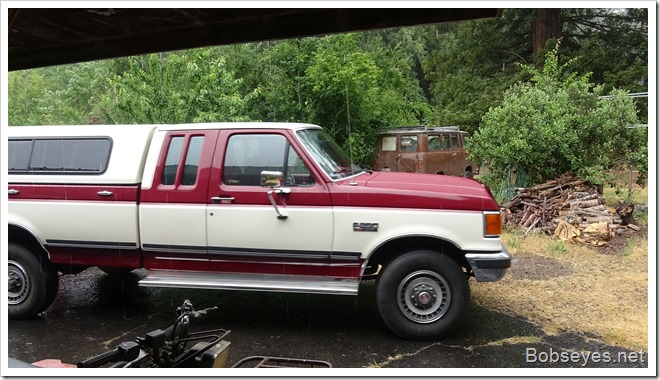 We started working on his mower checking it out and cleaning it up. I’d decided what to do when the light rain started, very light at first but it slowly built up to a heavy drizzle so Ray went on home and I said to him if the rain stops this afternoon come back.

Shortly after that my brother Barry came by on  his motorcycle, a dirt bike.

We shot the bull in the yard for a bit. He’s going to help me haul some materials down from the forest to build my chicken roosts out of next week some time.

Eventually, the rain stopped so I went outside and built the braces for the mower. I was having a hard time finding enough bolts for the job so I called Ray to see if he had any and come on back and let’s get this done.

Ray had what we needed and we mounted the brackets on the mower, but I didn’t get around to getting any pictures of it all.

Ray went on home with a mower that should last a long time as it already has, it’s an old Craftsman.

Paid off in an artichoke plant

Ray left me an artichoke plant which I planted in the ground. It’ll take a year or so before I get any  chokes on this plant, but it’s a start. 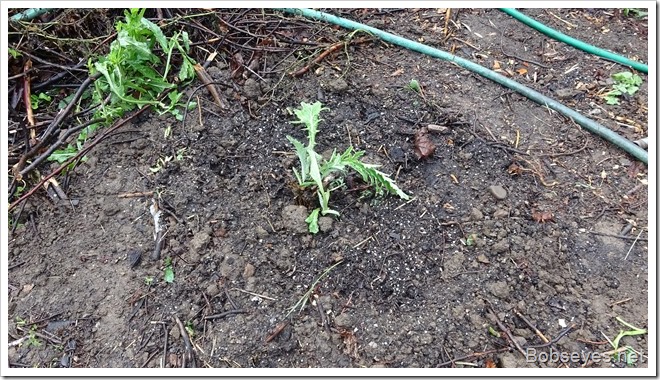 I wasn’t much in the mood to start any other projects, so I mostly chair hopped around the yard.

I did eat some cherries as they are starting to ripen up. 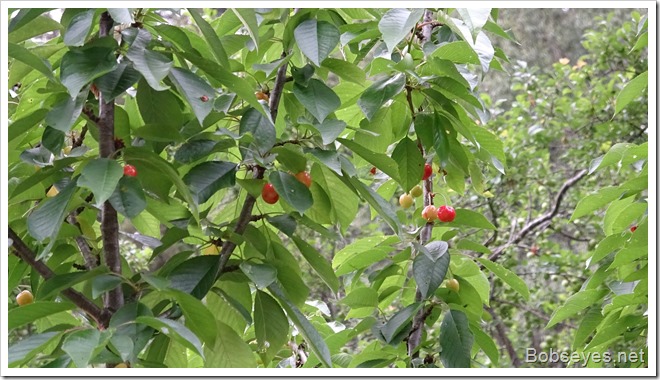 Beat the birds to them

I have to eat them as soon as they get to this stage to beat the birds to them. If I tried to ripen them like they sell in the stores I wouldn’t get any as the birds would get them first. 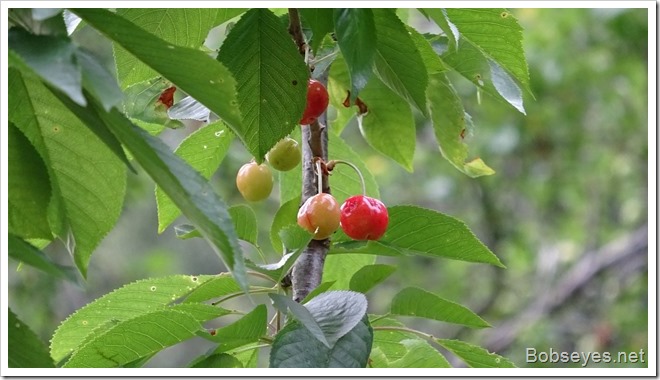 My potatoes are growing nicely in my blueberry patch. They are planted in straight forest leaf mulch, redwood, pepperwood and tan oak leaves. 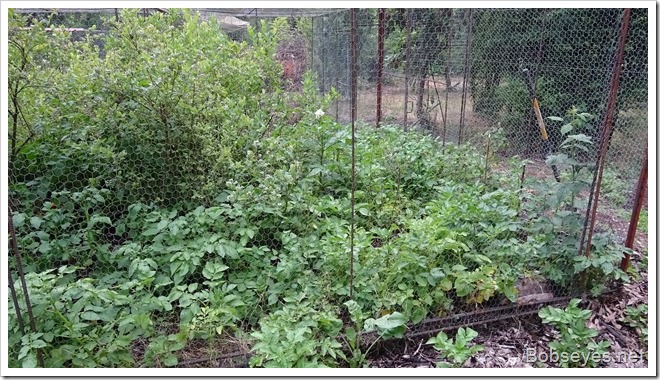 We should be getting some peeps pretty soon, little chickens so I’ve been getting things ready. I shoveled up this redwood mulch which is mostly chewed up redwood balls, cones. The red squirrels chew up the balls to get to the seeds and drop all the stuff under the tree. This should work out well on the coop floor to keep things tidy. 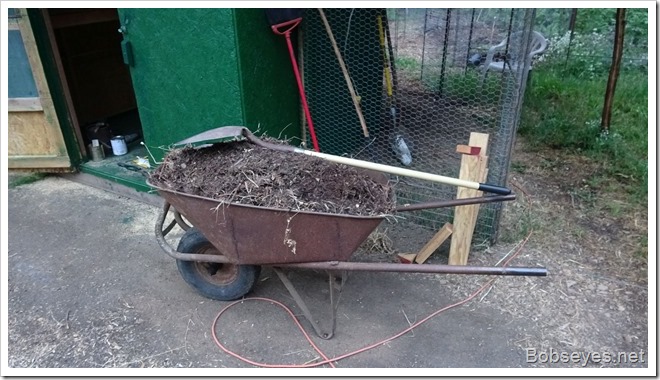 Speaking of chickens Mr. Ed said in comments why not just go get one of your brothers range chickens to eat.

Well, that would be too easy. :O) The reason is more complicated and has to do with  my corn sensitivity problem. I’ve been working to get the corn stuff out of me for over ten years and I think I’ve gotten the big stuff out so to speak, but the food with just a little which is hard for me to detect but still affects me seems like it might still be a problem.

So my only chance to find out for sure is not eat anything except what I grow for awhile to see if the rest of the symptoms clear up.

Most chicken feed has corn in it

My brother feeds his chickens corn as do most other people that raise chickens and I don’t think it is passed in the eggs or meat, but I’m not sure, so to do this test, I must eliminate any corn possibilities 100 percent. That means I need to raise my chickens with no corn stuff and eat only out of my garden, not eating or drinking anything from the store or taking any meds as most of them also have corn type stuff in them and most of them are also not good for healing up what I  have, but cause things to get worse from what I’ve been lead to believe anyway.

I don’t want to be a vegan

Right now to rid myself of most of the corn stuff I’m almost a vegan but I don’t wish to be. Here’s one of the problems. FDA requires meat carcasses to be washed down with acidic acid, which is sorta a strong vinegar type solution. The problem is they grow the stuff on corn and there is always some corn carried over in the product. This means that anything I was to buy in meat  would have gone through the acidic acid bath, so anything I buy that was from chickens is suspect and likely contaminated with corn stuff.

That’s the reason I’m doing all this elaborate building because eating is much better than starving and really you wouldn’t understand as you can eat most stuff. I understand only because I’m so limited in what I can eat which is also the reason I know that you can’t really understand. :O)

Unfortunately I think industry has screwed up our food chain and it’s causing big food sensitivity problems with people.

Unfortunately it seems that no one really cares. If this was happening to some animal group, say deer, it would be an environmental disaster and they would do something about it. It’s not hard to look around and see all the problems people are having with foods these days that they never used to have problems with.