Fishermen and River Otters Fishing Away After My Chiropractic Appointment

So yes I made it to my chiropractor’s appointment in Forestville on time today. He’s basically adjusting me to make sure all my nerves are functioning properly for the treatment of leaky gut, which can be caused from my  corn sensitivity problem. He didn’t find much today so said I was good to go for now so I didn’t make any more appointments with him.

I did ask him if he had any other corn sensitive people as I’ve asked this of all the western type doctors I’ve come in contact and they say no, no corn problem people.

His answer was yes, he has multiple people trying to rid themselves of corn which was a surprise to me.  I advised him to tell his patients about Dr. Bergman on  You Tube if he wanted to help them out. I didn’t tell him he might learn something from the guy also as a chiropractor. :O) He will learn that for himself  when he checks him out. :O)

Stopping at the parts store

Anyway from there I drove on down to Monte Rio to kayak for the day stopping at the parts store there. I wanted to get some heater hose for my van  project and as long as I was there I asked if he had any gas caps in stock as I left mine at a gas station about a month ago. He had one and my heater hose so I was happy.

From there it was only a short drove to the boat ramp on the river where I put my boat in the water to a nice day.

Paddling down the river

Just leaving the boat ramp. Some fishermen up the river. 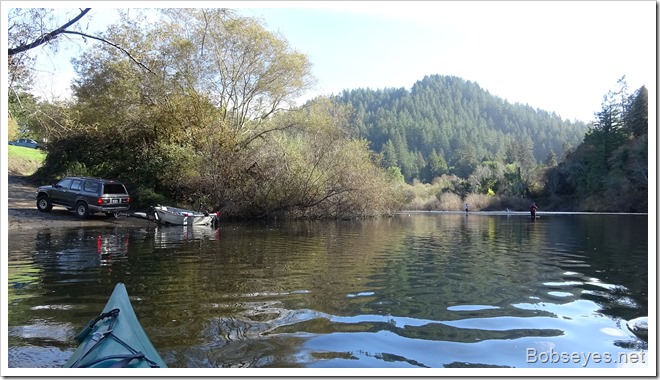 Shooting the bull with Darwin

Going down river I could see a fisherman in his boat in what they call the  slot fishing away so I paddled down to talk to a guy called Darwin who fishes the slot a lot. 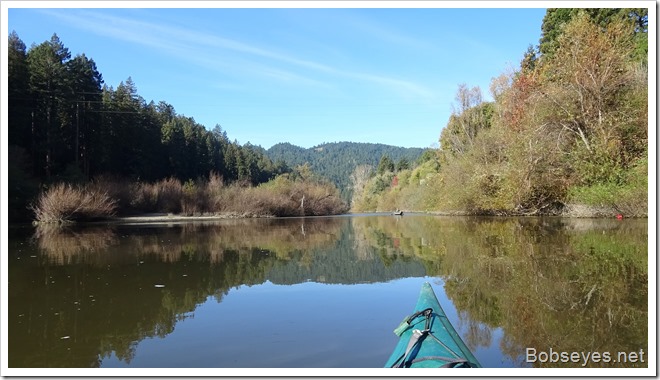 I stopped and shot the bull with  him for about a half hour. Not much in the way of  fish action today.

I think this old guy knows me well

I passed by this great blue heron fishing away. I’d see it fishing with the otters on the return trip. 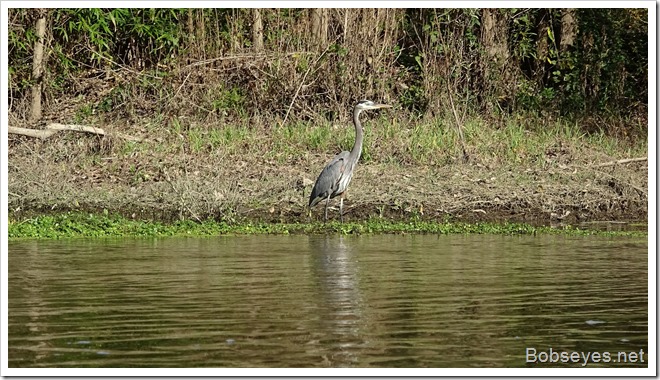 I continued paddling on down the river slowly looking like this. I could see a lost boat up ahead that  has been down here for over a week. 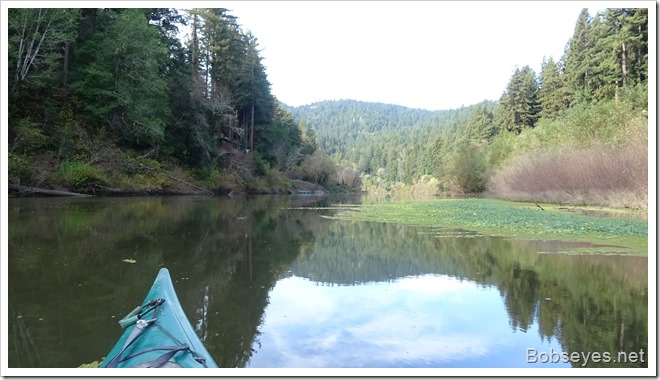 This Seaeagle has been down here for awhile with no one claiming it. It’s loose and the bow rope is stuck on the trees. It broke loose from someone up the river. It’s fairly new, maybe a year old and costs about 8 hundred dollars. I don’t need one or I’d pick it up as river salvage if I wanted it. Maybe the owner will see this or hear about it? 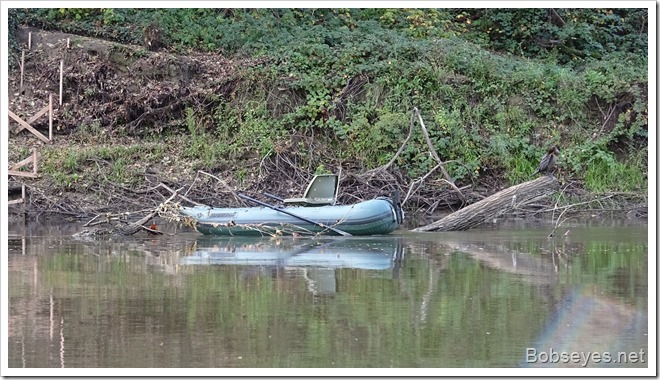 I made it down to the Villa Grande Hole and sat here for about an hour watching things. I did see a big salmon roll just above here on the way down. 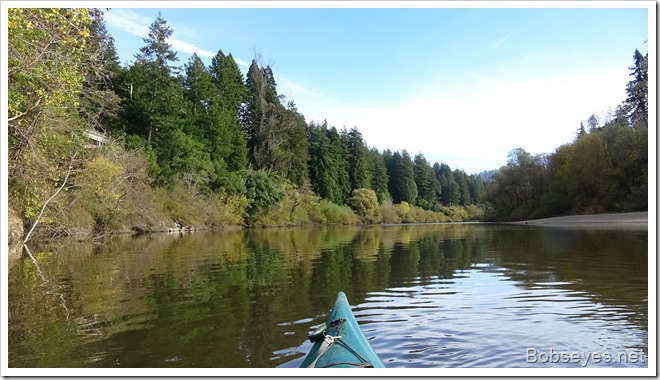 Eventually I started back up the river and was sitting when some otters approached from down river. 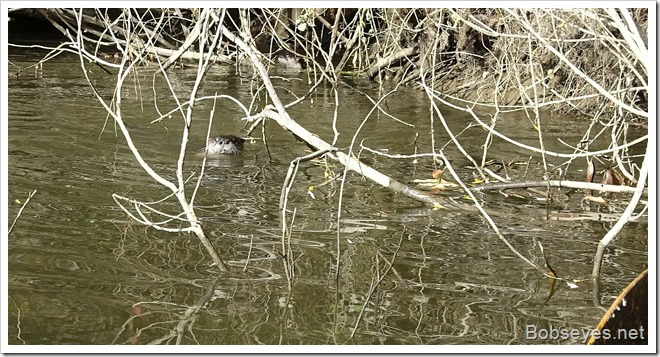 Waiting for the otters to pass

They were fishing along the sides of the river headed up river the way I was going. From past experience I knew if I pulled ahead of them and waited for them to pass by I might get some good pictures of them.

So I was looking ahead at that green patch up ahead. If I pulled into the dead tree ahead and waited, the otters would have to go by me and maybe I could get some decent photos of  them. 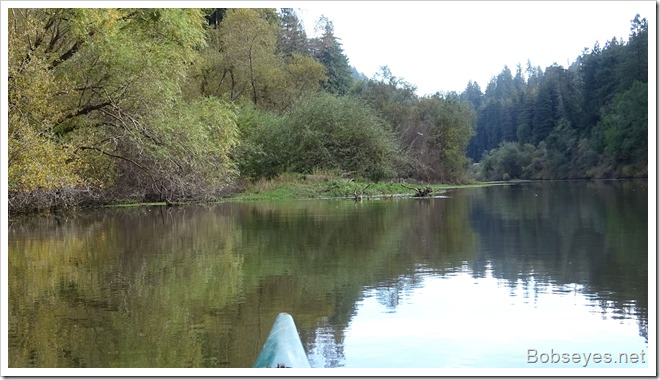 Pulled onto this spot to wait for the otters

I puled onto the dead trees and grounded my boat on the gravel there which would also help get some good photos as the boat would be still and not moving on the water which makes for clearer pictures of things. So I wait for the otters to come by and pass in front of me maybe. 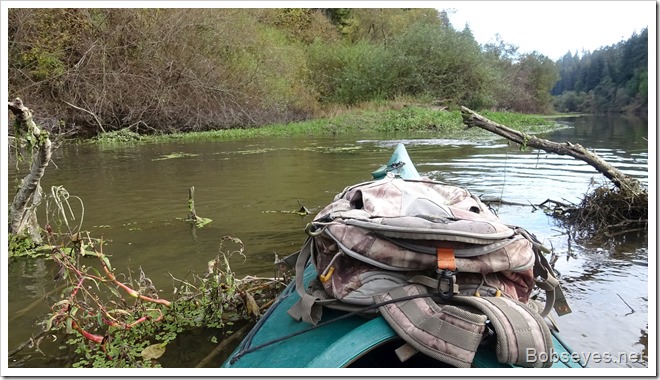 The otters did come by me and passed right in front of me. Here’s one of them checking me out. 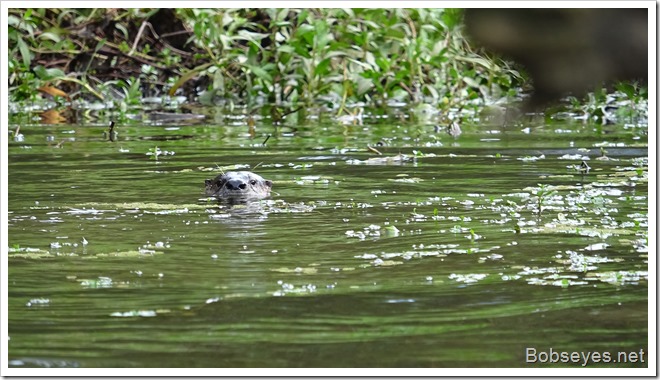 There was a commotion just to my left as one of the otters caught a fish just over a foot long and took it into the brush and started  devouring it. 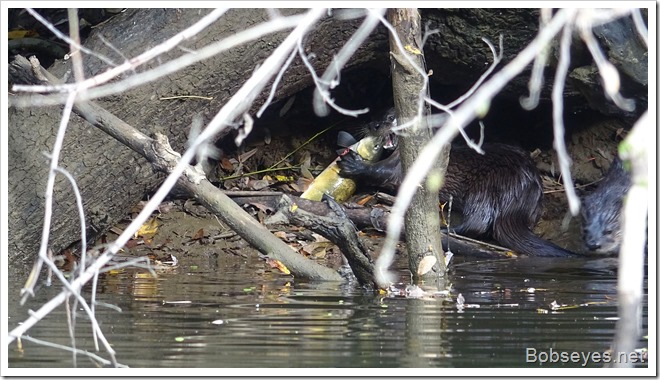 Just a bit closer. It was hard to get these shots as the camera wanted to focus on the sticks in front so I took a bunch of photos to try and get these clear ones. 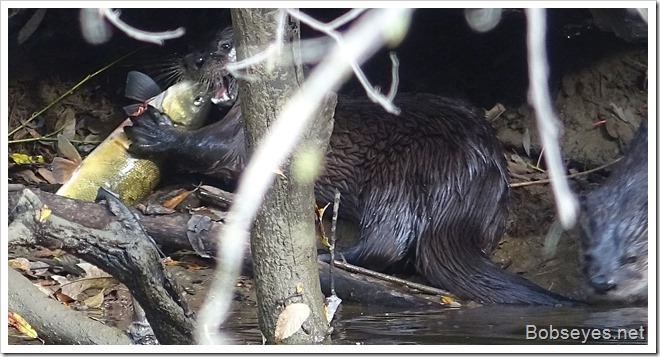 Gave up on the otters

Most of the other otters continued up the river so I did  too. I was going to try and catch them but I realized they were moving too fast and I didn’t want to go up the that fast so I gave it up and stopped in these weeds for a bit. 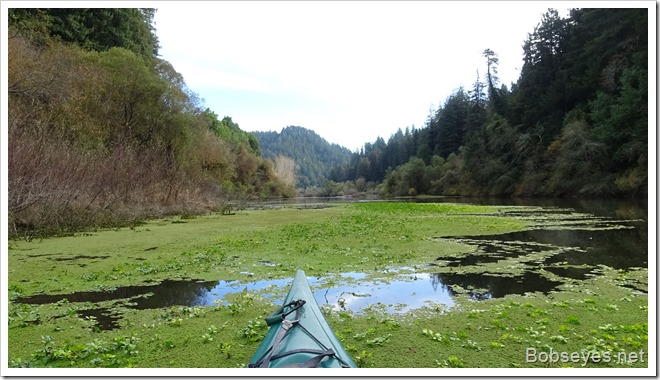 I was watching this great blue heron when it started to move like it was after something. 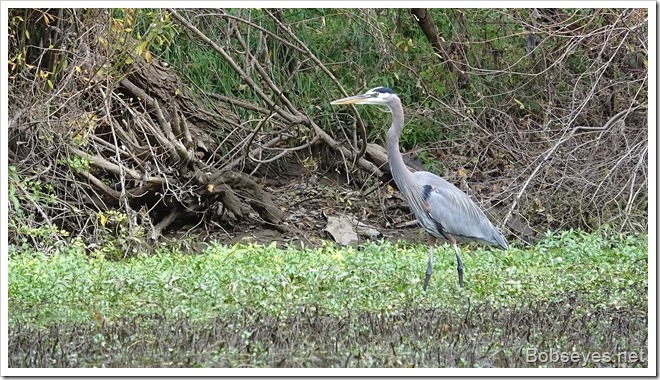 Aha, the otters have returned back down the river maybe to get back together with the one eating the fish.

Herons fish off the otters

There’s some otters on the left and the great blue heron is walking over to get close to them.  The herons know the otters will spook some fish out of the weeds so they fish off the otters often. One way I find the otters is to watch for the herons doing this and then I will spot the otters fishing away in the weeds. 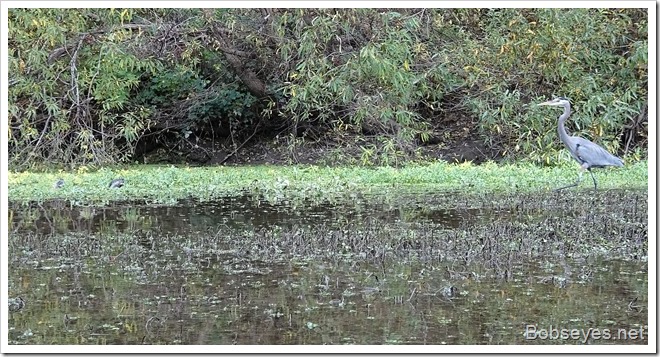 See what I mean. 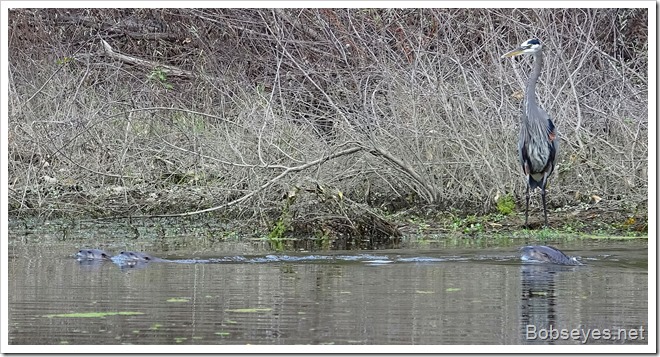 The otters continued back down the river so I left them and continue on up the river stopping in these weeds for a bit. Stopping in the weeds keeps my boat from drifting down river in the current so that’s one reason I pull into them. 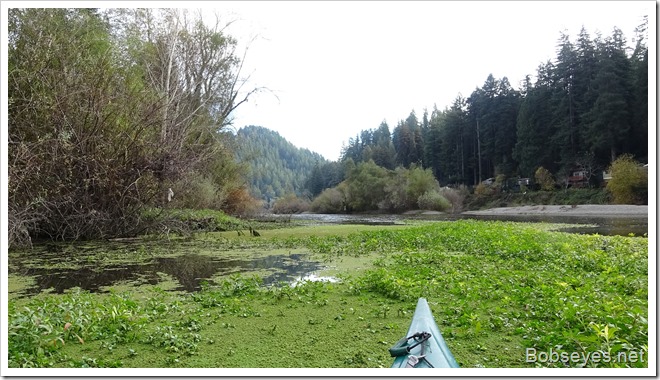 A place to rest you wouldn’t expect

I continued on up the river going through this current at the bottom end of the slot. I know if I pull my boat up behind anything that is poking up in the water I can stop and rest as the water pulls the boat right up to the protrusion so it’s easy to rest the boat a bit. 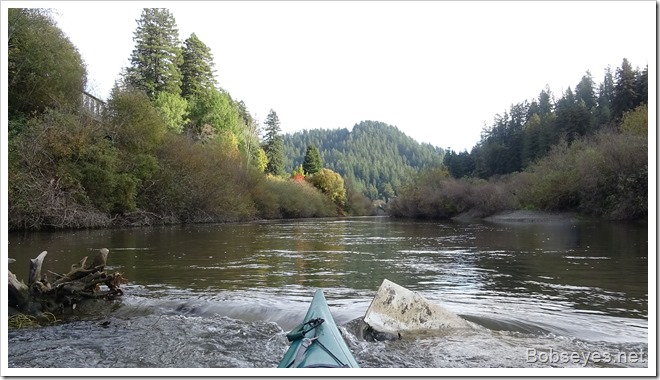 It wasn’t far to the boat ramp from that spot. Here I’m just paddling up to the Monte Rio boat ramp. 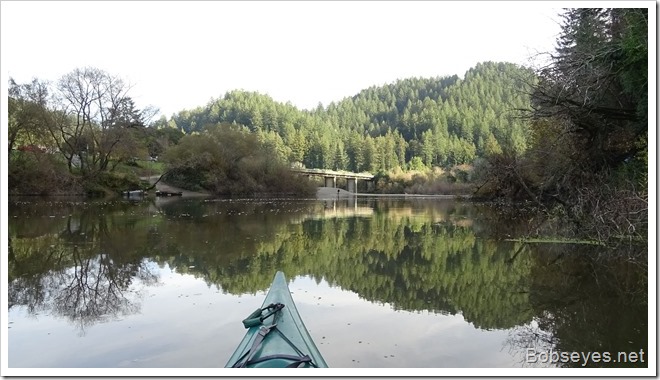 I took my boat out and went on home for the day and that was pretty much my day.