Fire Guys Broke My Gate, a Dirt Bike Ride and Shooting the Bull With My Cousin

After being out in the desert for about a month the snow and the forest was a welcome sight. I stopped at this spot for lunch on the way home up in the mountains. 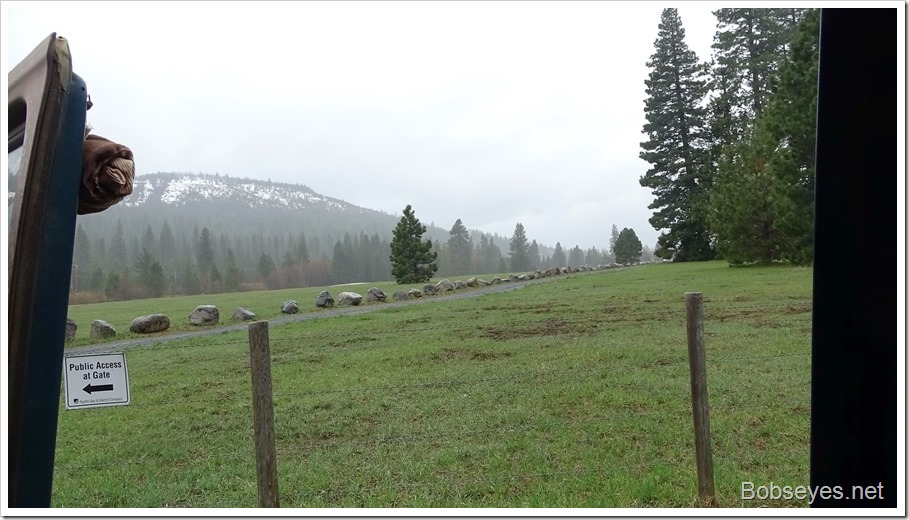 And I had to stop a few times on highway 20 as they were clearing a lot of trees, likely for passing lanes as this area could sure use some of those as a lot of this road is double lined for miles……. It was snowing lightly and raining lightly off and on. 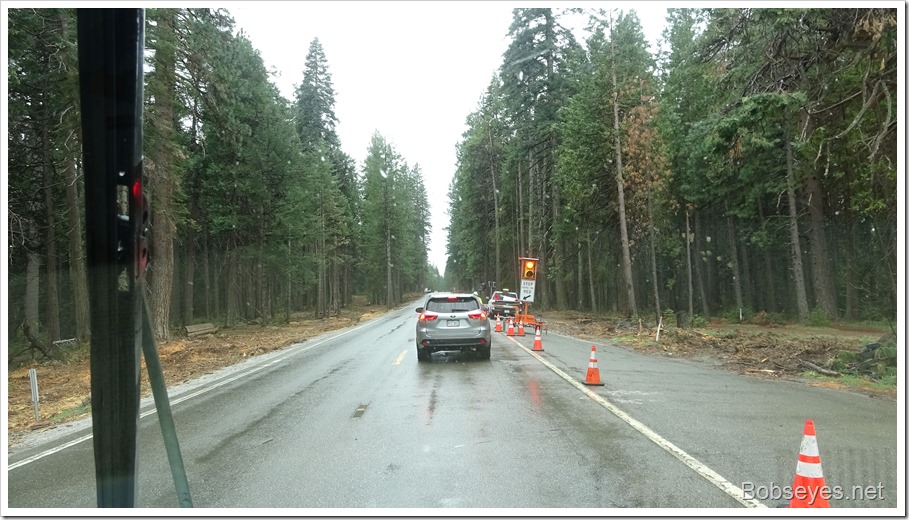 Once I got it going today I headed out to check out the damage on my front gate’s automatic opener as my neighbor started a small fire in the forest recently while I was gone. The fire guys pushed the gate open and broke the opener. This is the second time my neighbor did this and the second time the fire department broke my gate getting to his fire.

This is my front gate and you can see the push arm going up into the bamboo as it’s broke and doesn’t work. 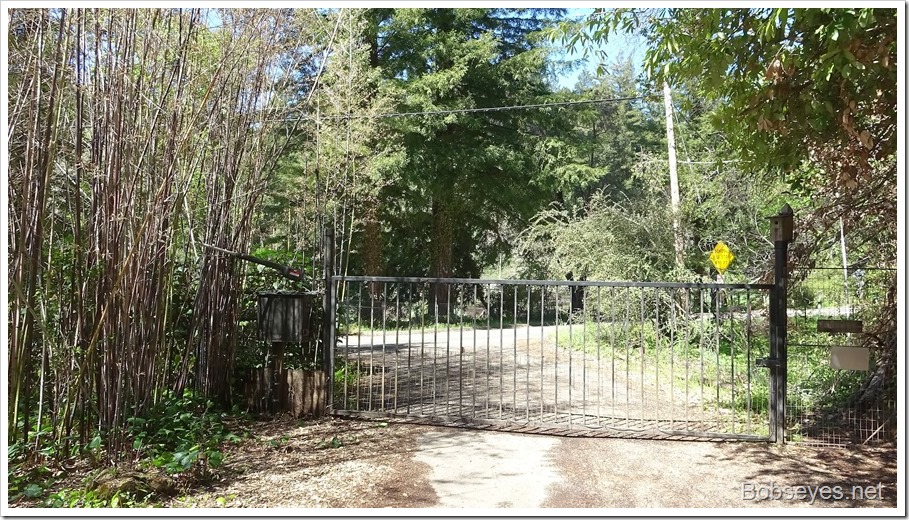 I checked out the control arm and it was bent and broken and not going to get fixed. I was able to fix the other bent metal brackets with a big hammer. 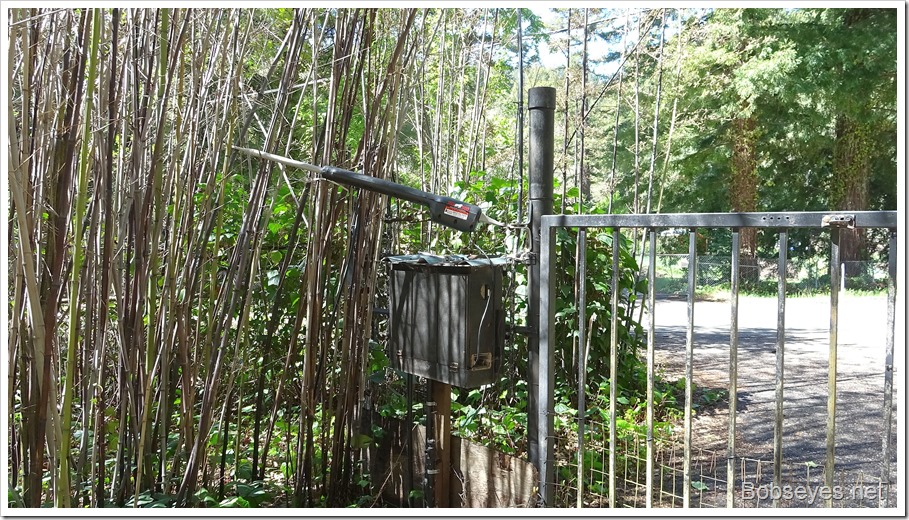 Last time my neighbor called the fire department they broke my gate getting into his place and he paid for a new control arm and I’m sure he’ll do it again. I’m just out the work to get it fixed back up.

I’d just done what I could do on that gate controller when my brother Barry pulled into the yard with his truck and dirt bike in the back.

That meant we were going for a dirt bike ride up in the hills.

But first we sat in the yard and caught up on what’s been going on around here.

Then we hopped on our dirt bikes and headed on up into the hills headed for my cousin’s place who lives up on top of the hill with her husband.

We took the round about way to get there and found them home.

Barry wanted to talk to her about some white water rafting with her son up in Idaho. We shot the bull for about three hours and didn’t have much time left to go for a ride but we did just the same as the dirt bikes can cover a lot of ground.

Here’s Barry taking off from my cousin’s place. 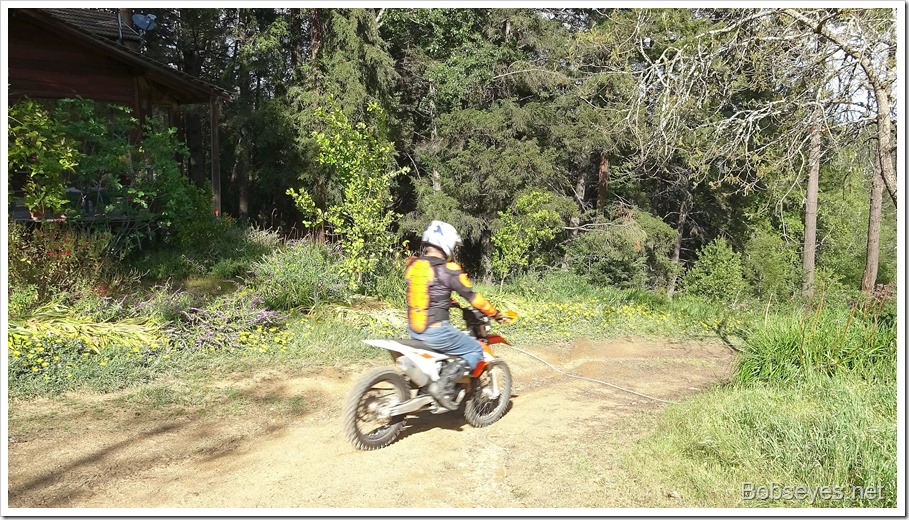 Barry almost ran into this downed tree as it was around a turn. I watched as Barry removed enough broken branches to get by it so we could finish up our ride. 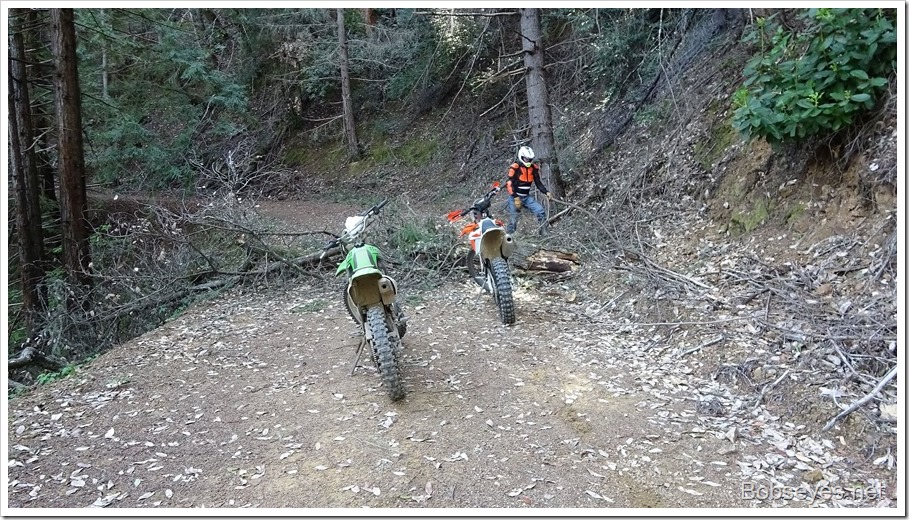 When we got back to  my place Barry took off for home and I started unloading my van a little bit at a time and did a lot of chair hopping too.

I’d planned to look at my car’s radiator as it was leaking when I left on my trip but that just didn’t happen today, maybe tomorrow.

(Visited 233 times, 1 visits today)
This entry was posted in Uncategorized. Bookmark the permalink.

2 Responses to Fire Guys Broke My Gate, a Dirt Bike Ride and Shooting the Bull With My Cousin