Finishing Up Working With the Forest Fire Rehab Workers

Once I got it going this morning and fed the chickens I hopped on the dirt bike and rode on up into the hills to see what the forest fire rehab guys were doing.

I followed my brother Barry’s dirt bike tracks to find where they were working. 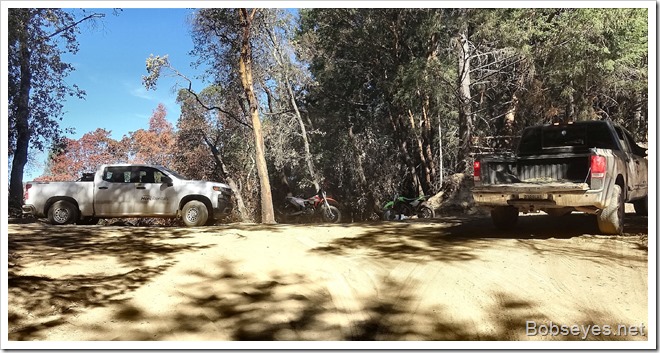 Here’s the excavator going down the road making a bit of dust. 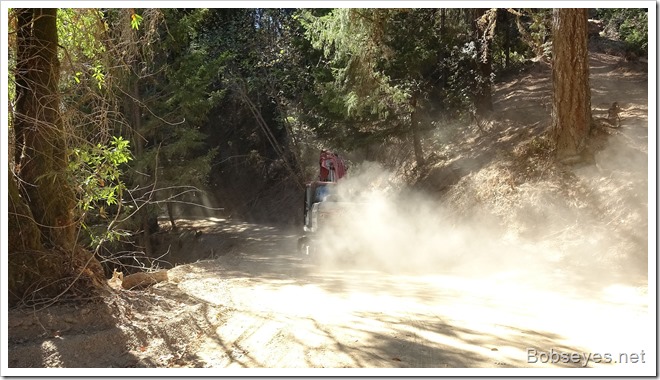 He didn’t have to go far until he came to this plugged up culvert that they had to unplug. 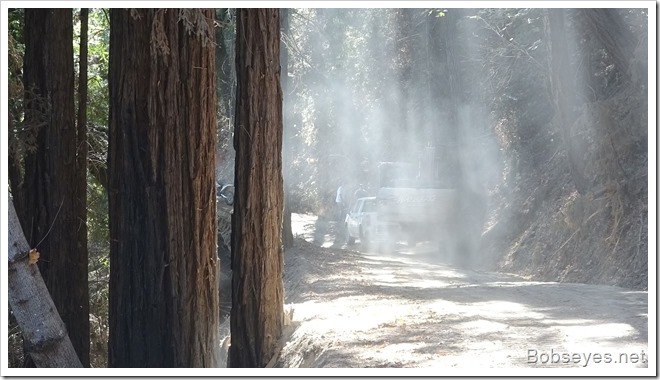 They stopped the machine and the guys all checked out what had to be done to unplug the culvert pipe. 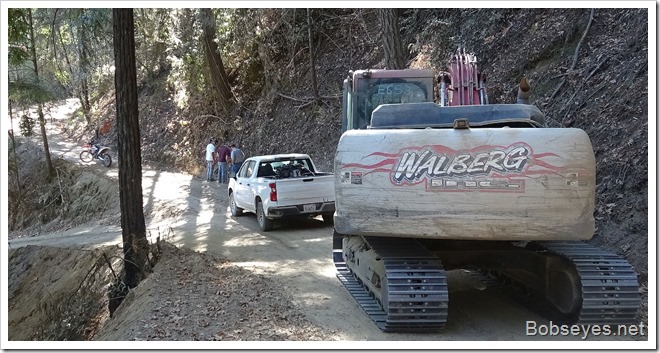 The excavator dug down to clear the upper end of the pipe. 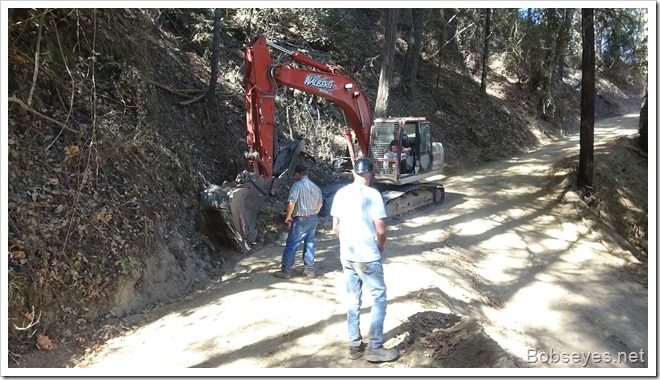 And dumped the dirt over the bank. 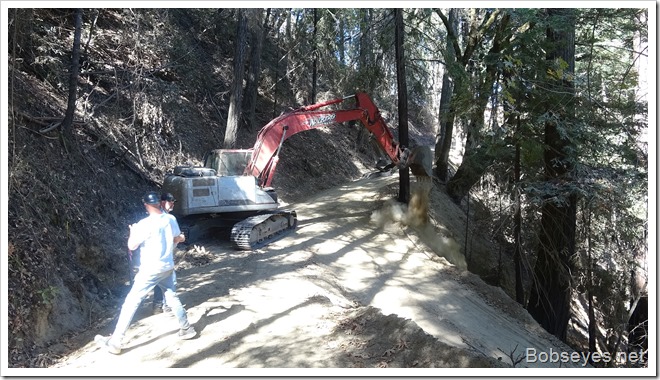 Next my neighbor wanted them to right a metal gate post one of the bull dozers had hit while clearing the road for a fire break early on in the forest fire. The big metal pipe is hard to see in the background. The neighbor is checking to see if the gate cable will reach the post and it didn’t, but that could be fixed up later with some cable added. 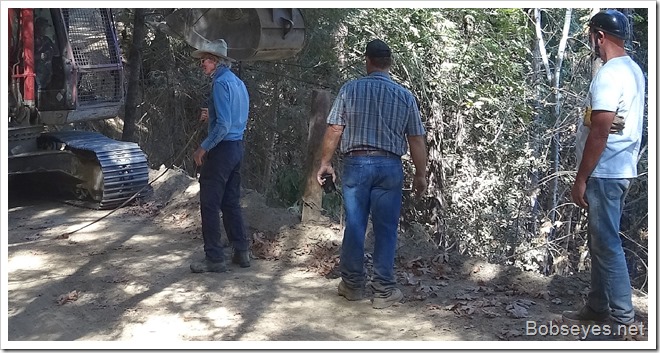 Another culvert to unplug

Next we moved down the road to this spot where another old culvert was buried which they uncovered. 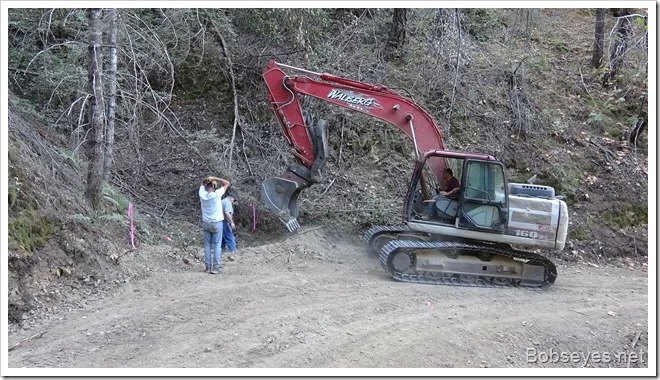 They found the cement where the culvert started which was good enough for us. A little shovel work in the rain will finish the job this winter. 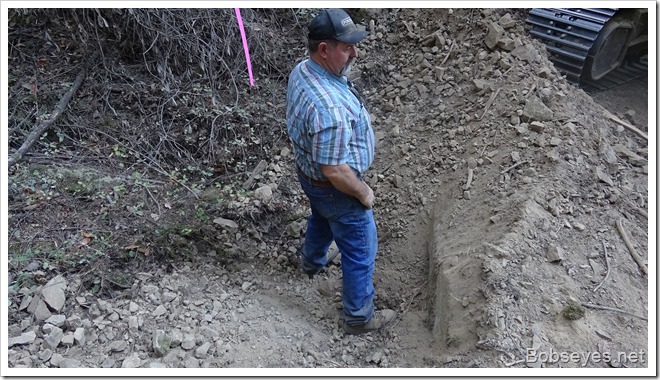 They get to our place

From there they moved to our place which we’d been waiting them to get to as the fire break they put on our place needed some rehab work and the roads needed brush and dirt removed so we could use them.

The excavator guy started down the fire break which was a bit steeper than the picture shows. He put in some water bars and moved some down  trees and brush onto the firebreak which had been piled up by the bulldozers while making the firebreak. 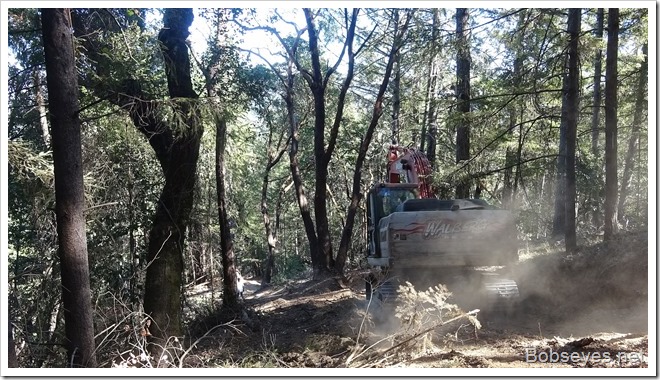 We moved down below the excavator as he worked down the hill cleaning up the fire break debrie and dirt piles. 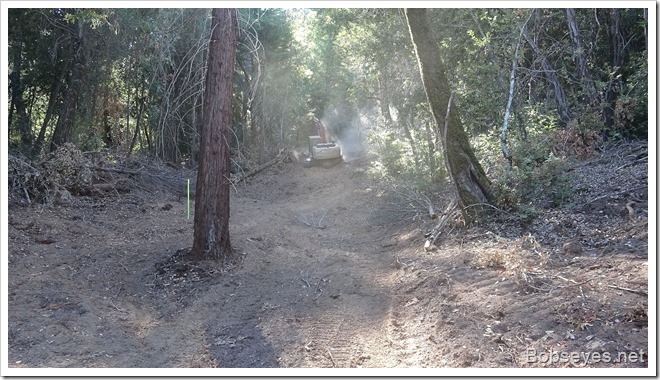 My brother Tom came by on his quad runner to inspect the work and shoot the bull a bit. 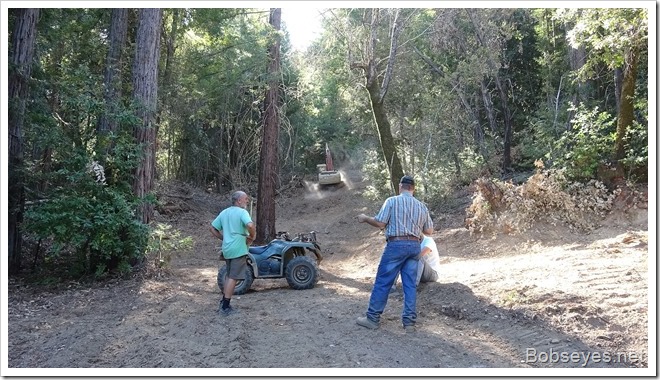 The excavator moved a lot of the trees and brush back onto the firebreak to rot in place and help hold the dirt in place when it rains. 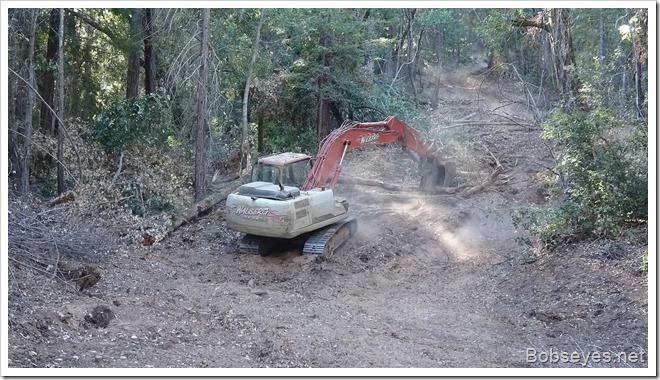 We also had him open up our roads they’d blocked when they built the fire break which he is doing here as they had trees and dirt piled up in them. When the fire break is made by the bulldozers they are in a great hurry as the forest fire is approaching so they don’t have much time to fix stuff up. 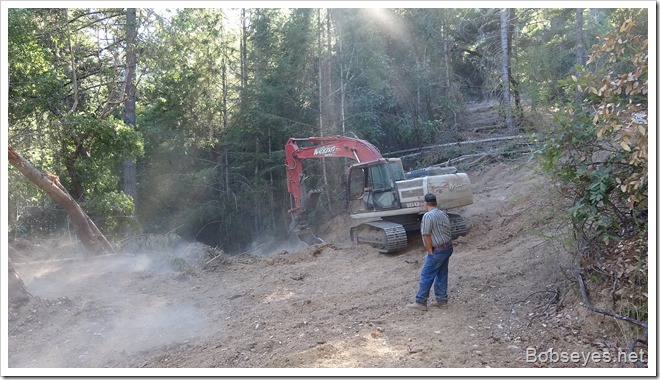 Made it to the bottom

From  here they went down a very steep part and ended up at the bottom where there is a creek that needs some cleanup which they will do tomorrow morning when they show up and they then are hauling the excavator off for some repair work and then back to forest fire rehab work as there is a lot of it to do in this state which should keep them busy until the rains start this winter.

From there I rode on home. All this standing around shooting the bull really wore me out so I didn’t do much except pen the chickens up at dark.

Nice day playing in the woods while the other guys worked.