The first thing I worked on was the cart. I needed to measure and cut the handle extension metal I found that would work and weld it up so that’s what I did. I extended the handle about a foot. 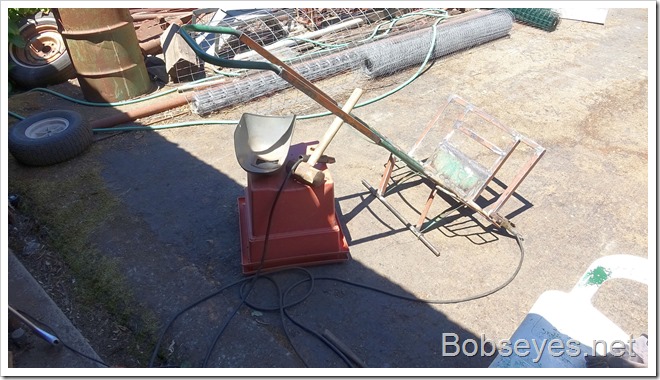 Use what paint I had

Once that was done I checked my spray paint supply. I wanted to paint it green but I only had a little part of a can of that but I had lots of red primer so red it was 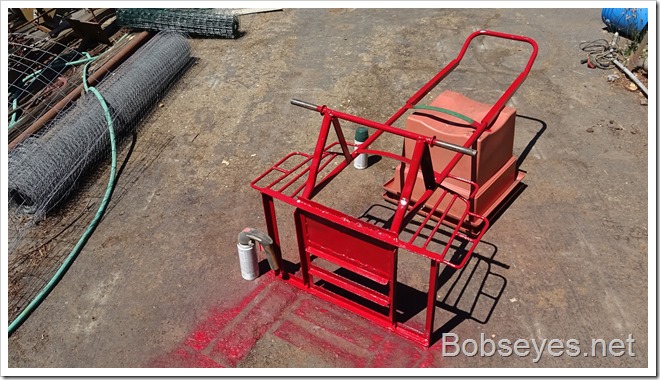 I put the little bit of green paint I had on the handle as I’d rather look at that than red.

And then I greased up the axles and installed the wheels. 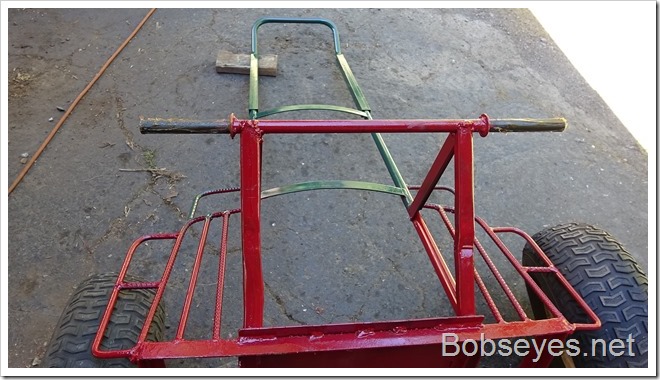 Here it is. I wheeled it around the yard a few times and I think it will work real good for what I want to use it for. Most of my designs are dictated by what materials I have on hand to do the job. 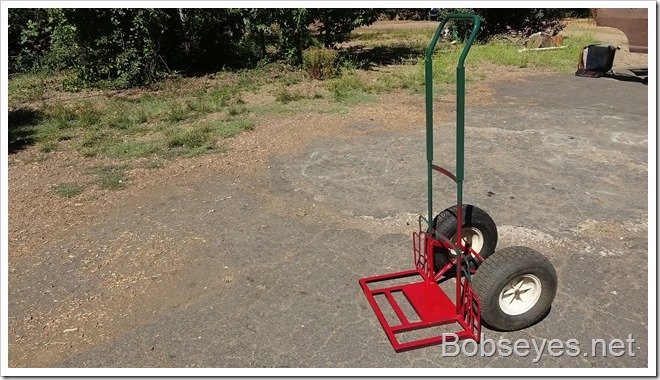 My brother Barry came by with his dirt bike and was going for a ride so we sat around a bit and shot the bull for awhile.  I decided not to go for a ride.

Having a look at the van’s burned engine

Next I cleaned the stuff out of the way in the van so I can remove the engine cover and compartment. I got the hood open from the back and I can take the bottom part out but it was late in the day so I didn’t want to remove the bottom part just yet as I’d have to put it back on because of possible rodents at night. 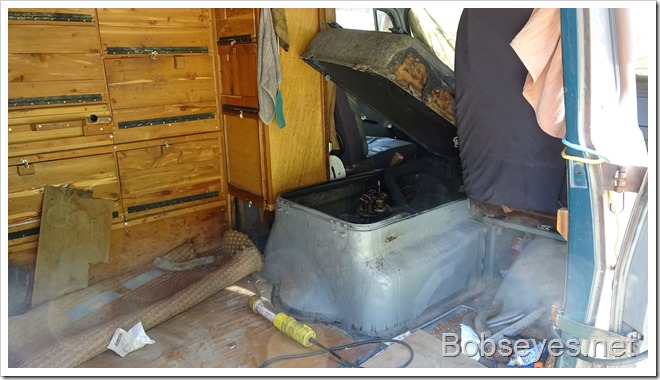 It doesn’t look too bad. 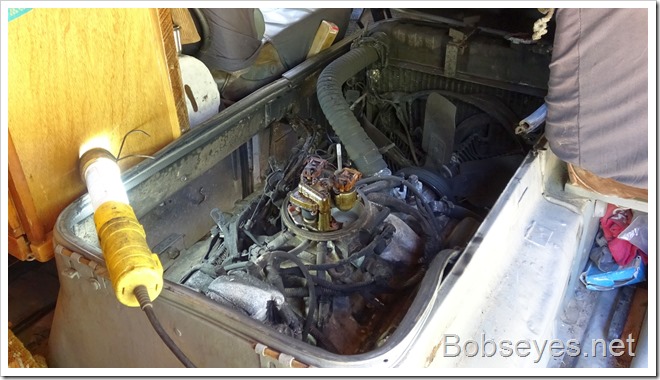 Except for this. Burned spark plug wires and my electric fuel pump relays and fuses. 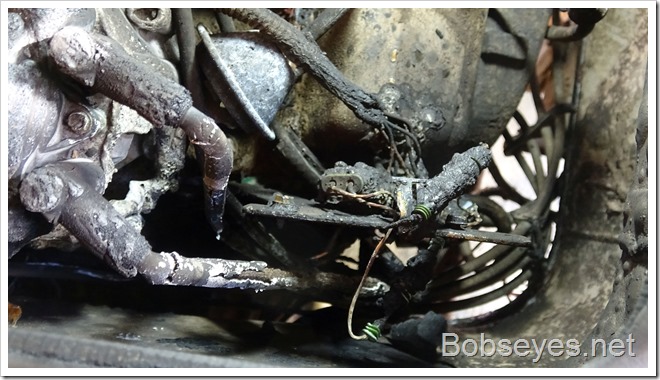 And of course the distributor is fried with a big hole in the side. 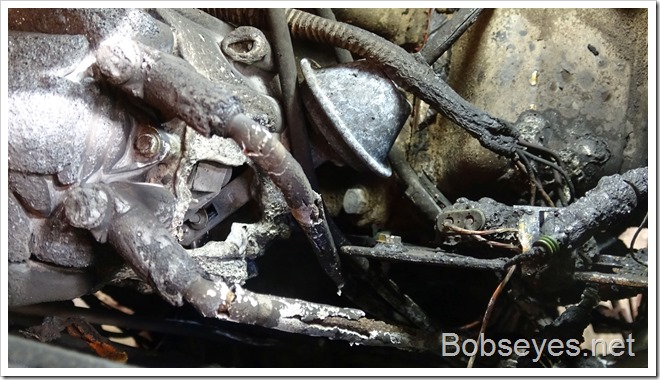 I still can’t see exactly what happened until I remove the engine compartment and can see all the gas lines which I’ll likely do tomorrow.

Right now it looks like I’ll need a new distributor and a new computer harness with the relays and sensors and I might need two injector pods as they got pretty hot. Two new electric radiator fans as they got hot and melted and some burned up wires need replacing and gas lines. That should do it, it’s doable. Good thing for the government stimulus checks. :O)

Late in the day I started working on the rodent trap improvements.

I needed some sheet metal to cut some strips for the trap. I found this piece of metal and cut off what I needed. 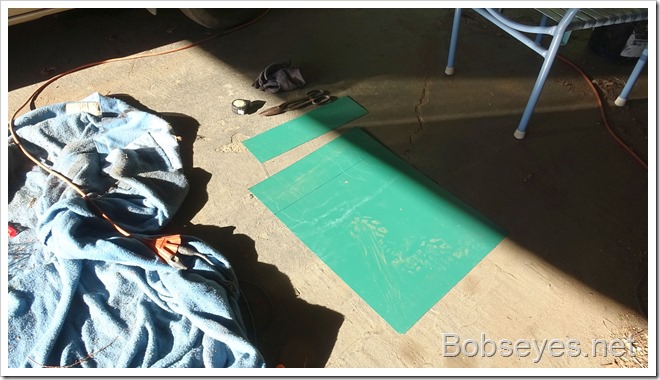 The piece needed to be bent so I took it to my bending machine and bent it. 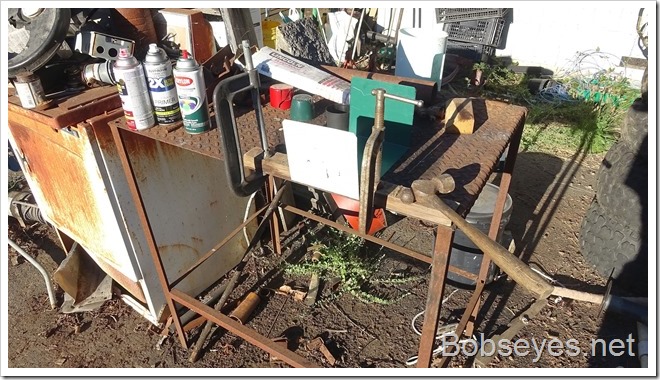 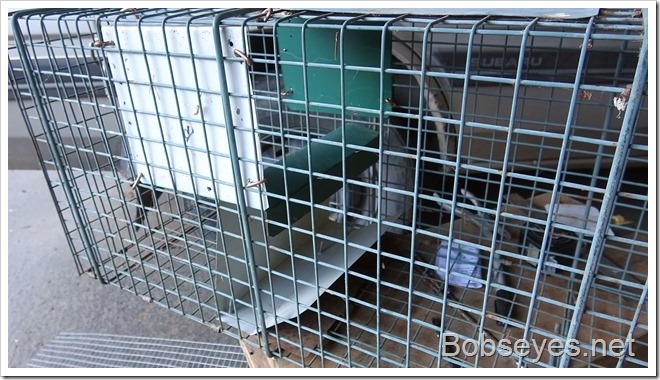 Here’s an end view looking at the trigger tray extension and the piece of metal over it to keep rats from crawling over. 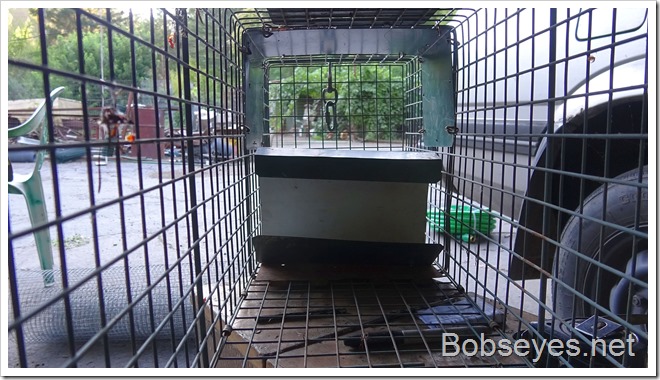 Another improvement was to hinge the normally closed end so it can be opened to bait the trap much easier. I have one latch but I think it will need three of them to properly keep the door closed a those big ol coons are pretty strong sometimes. 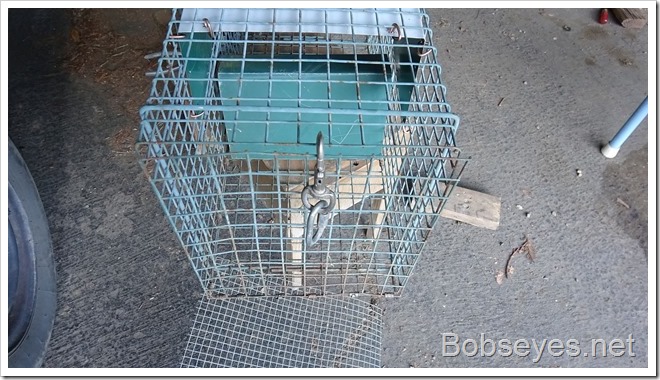 Then I cut out the half inch wire mess I will cover the cage with as the one inch holes it now has won’t stop small rats and big mice.

I put all that aside and will finish it up tomorrow, likely

While walking around the yard chair hopping I noticed my apple trees have way too many apple on them and will cause the tree to break off limbs if I don’t thin the apples out. I worked on it a bit but think I have to do it again as there’s still too  many apples. 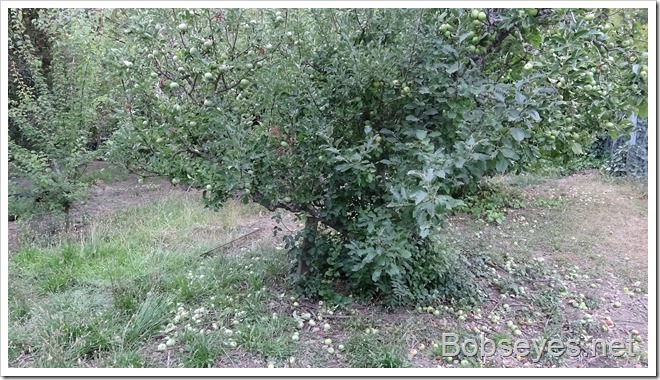 2 Responses to Finishing Up the Hand Cart, Burned Van and Rodent Trap Improvements