Finishing Up Chores, One Last Hike and an Elk Calf

Started out finishing up chores

I wanted to finish up my chores today as I wanted to leave towards home tomorrow morning. I needed to put a board in front of the chicken nests to keep the eggs from falling out so I took care of that first.

After  a short break the next thing that needed done was to repair a leak in the roof where the rain was coming in.

I climbed up on the roof which had a nice view. 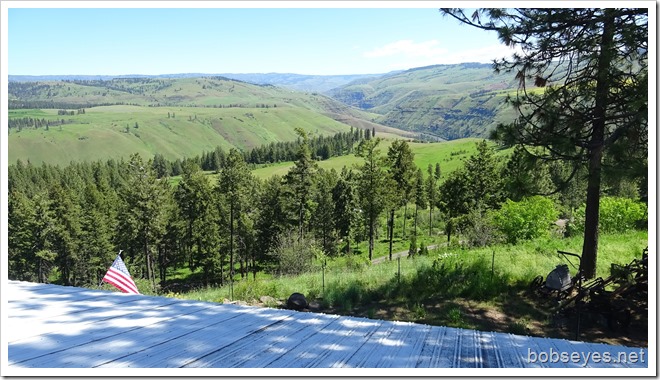 The leak wasn’t where I expected it but just above that spot. The old goop was cracked so I put some silicone on the cracks and called it good. I’m getting old enough where I’m no longer comfortable on a roof. I never really was. 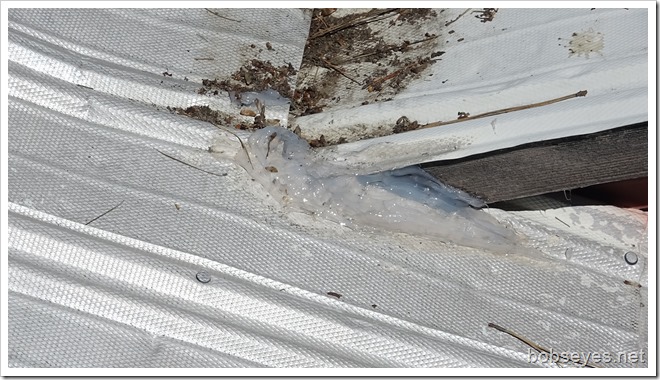 One last hike in elk country

After some lunch I went for a hike. I wanted to check out a new piece of land just off the driveway and down instead of up. I left the end of the drive and walked down the hill a little when I ran into this rock quarry with a nice road going by it and leading in the direction I wanted so I followed the road which was also an elk trail, fairly well used. 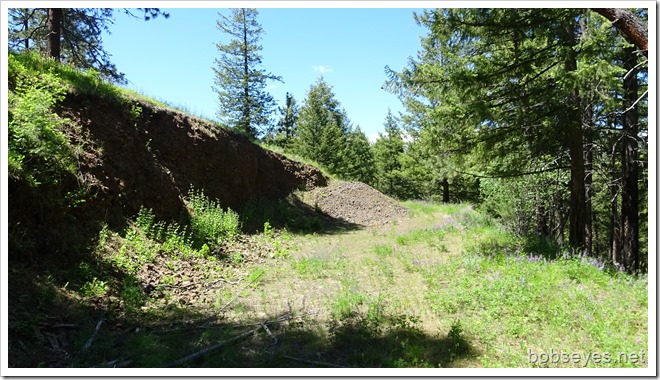 Like I said the road was more of an elk trail and very lush. 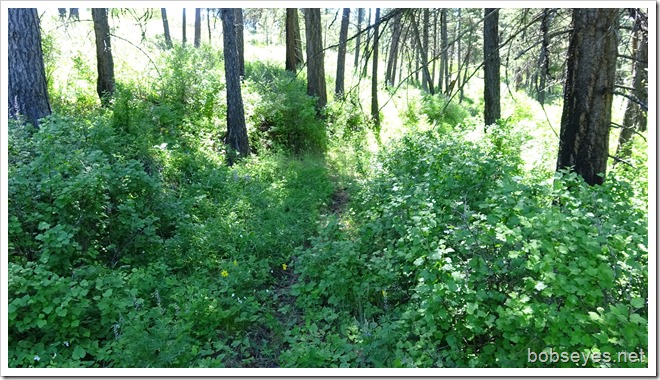 I walked up to this area in the trees just ahead. The area was so lush I stopped to look and take some pictures and it’s a good thing I did, just in time. 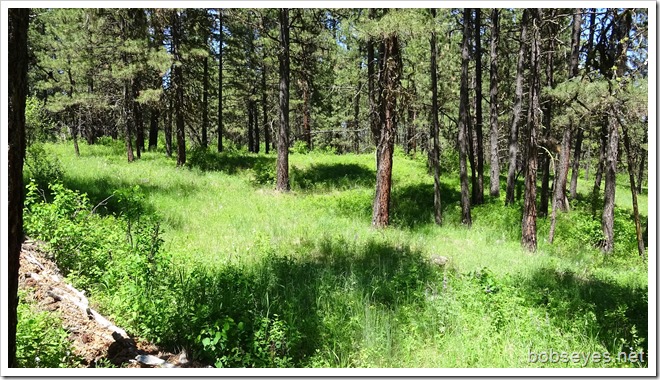 I was taking some pictures when I spotted what I thought was a dead calf about twenty feet from me right where I was going to walk. Now if that thing was alive, it would have spooked as I would have almost stepped on it scaring the heck out of both of us, so it was a good thing I saw it first. 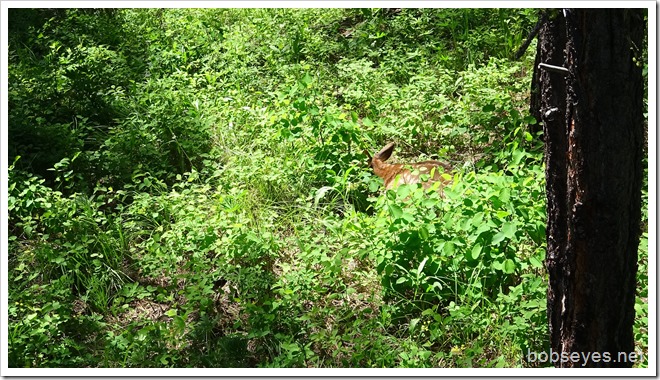 Looking at the ears I could see that young elk was alive and just laying real still not to be seen. It never moved while I was there except for twitching it’s ears. 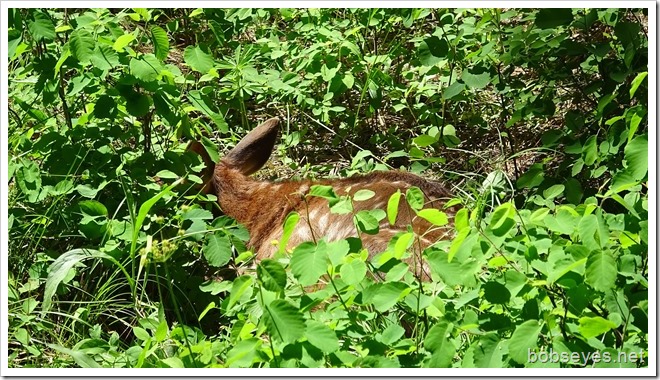 As soon as I realized the elk calf was alive I scanned the area for it’s mom. I knew if this calf gave a distress call it’s mom would likely be all over me and elk are rather large and I wouldn’t fair well with only a pocket knife and a stick for protection.

Why I haven’t seen any calves with the herd

Now I understand why I haven’t been seeing any calves out with the elk herds I’ve been seeing.

Apparently the female elk bunch up in herds for calving season. When a cow is ready to give birth, she goes off and has it alone. This is safer for the calf and the herd as the herd can not protect a calve from a mountain lion and if all the calves where out together in the herd the problem would be even greater, so they have the calves off by themselves and feed them until they are large enough and fit to be with the herd. So by the time we see calves with the herd, they would be a bit older and able to keep up with the herd. Safer for all.

I skirted around the little guy

I used the camera zoom as I was close enough and then walked around the calf and that was the last I saw of it. It never lifted it’s head as that would in most cases mean death. 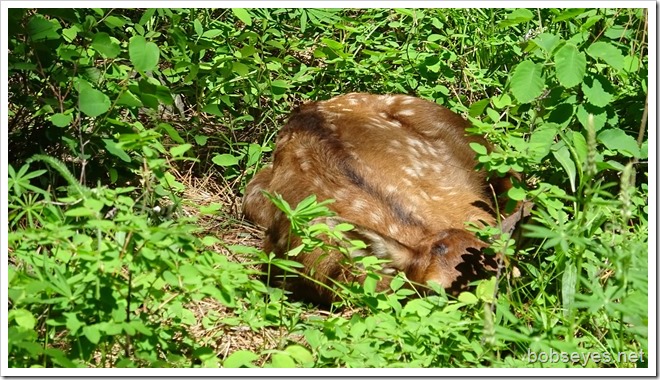 Headed for the old barn

I continued out the trail and veered towards the old barn out there. 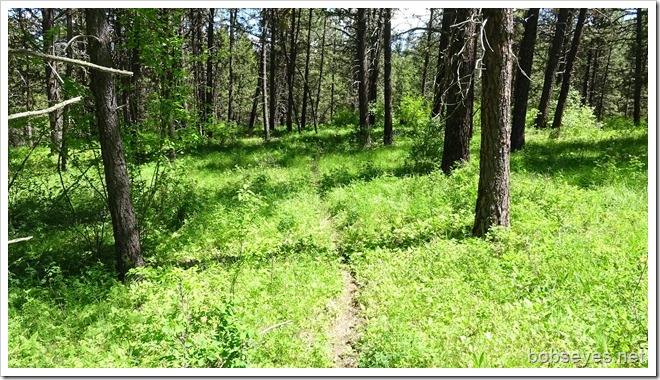 When I hit this big grassy area, I know the old barn was just around the corner to the left so I walked along the trees to help keep me out of sight, just in case there were more elk out there. I saw one more elk which took off across the field and it was gone. 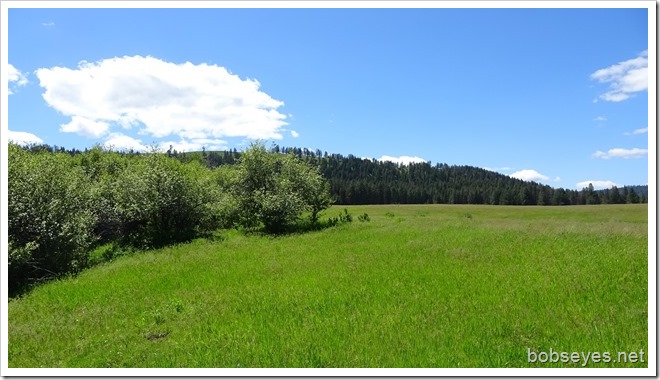 I rounded a tree and there was the old barn just up ahead. I headed for the barn and then down the road towards home, about another mile. 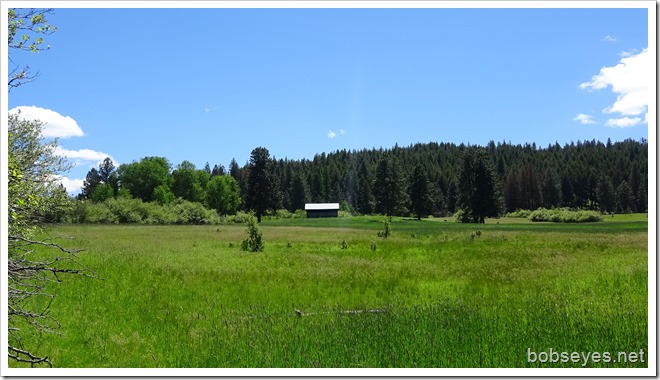 Getting the van ready to travel

Once home it was time for a little nap then I spent the rest of the day getting the van ready to travel towards my home tomorrow morning.

I plan to take two or three days to make it home as I plan to check out a couple places on the way, so internet access may be hard to come by for a day or so.

I likely will post the next time from Lakeview Oregon.

1 Response to Finishing Up Chores, One Last Hike and an Elk Calf