Today I planned to take the van out into some hills to see how it performs with all the work I did on it. I was particularly interested in the engine dying and hesitation problem and if the radiator baffles I added helped the van from overheating going up long hills.

Lightning and a little rain

Last night after midnight we had some lightning and a little rain so I stuffed a lot of stuff into the van to keep it dry.

So the first thing I needed to do was tidy this stuff up, putting some of it away as I went out and put this stuff inside when it started to rain. 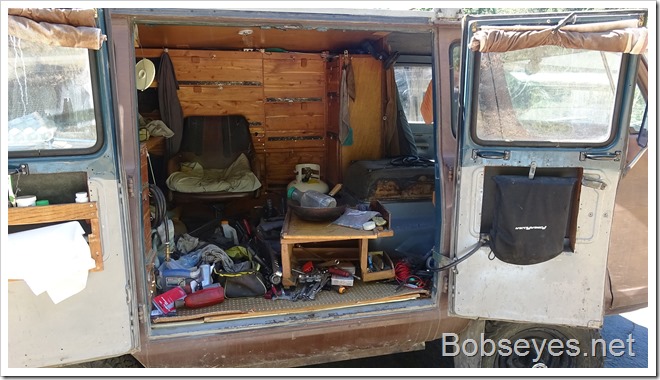 My plan was to take a drive out to a place I used to live for about ten years on some ranches as the recent forest fire burnt over this area as well as near us and I hadn’t been out this way in years. With the steep hills it should give the radiator baffles a good test. This is a place by Warm Springs Dam of which I was living there when they built that dam.

So off I went. About 3 miles from home the engine did it’s thing and died so I pulled over and cranked a bit and it started up so I continued on about a 45 minute drive until I got to the dam where the steep hills started.

Up until now the temp gauge was reading real good at about 190 degrees F. which is real good showing that  maybe my baffles had worked.

I just started up into the steep road past the dam here and the temp of the engine is starting to climb a little which it should. 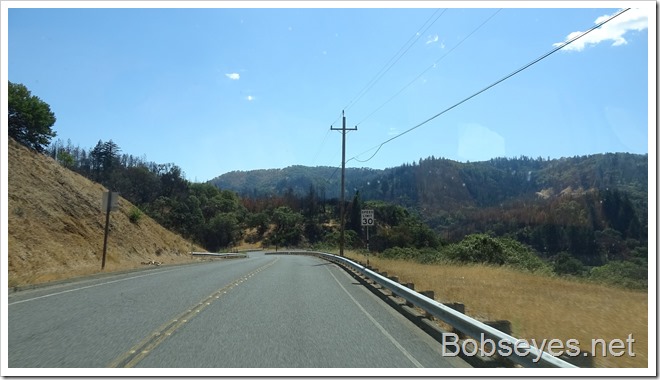 This is the steepest part and the temp climbed to about 220 at this point still very good from what it used to do going up hills. 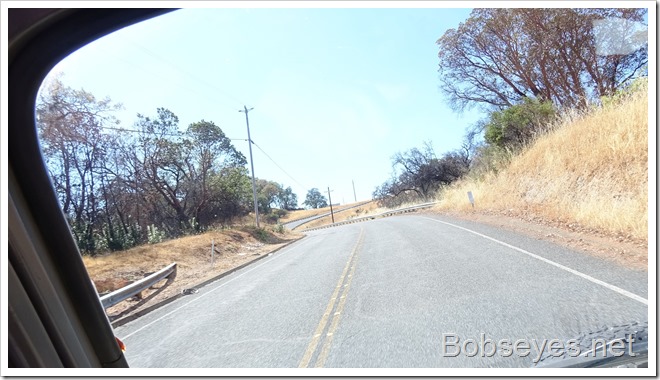 The engine did a hiccup once going up one of these hills, but was very brief and the engine didn’t die.

It was real steep on the last part and I was in second gear winding it up when the temp went over 225 and as soon as I hit this flat spot just over the top it started to drop fast, which was a very good sign and the 225 was also very good as before it would some times hit 250 or higher and I’d have to pull over and let it cool. 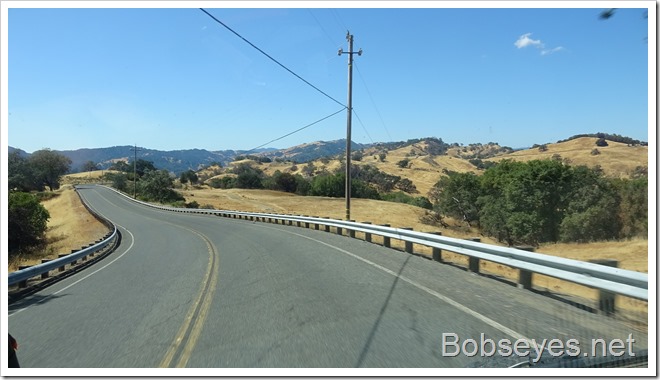 So for now I’d say I fixed the old van heating problem that I’ve had since I bought the thing many years ago.

The up coming trip through the desert will give it a final test.

Stopped here for a look see

I pulled over at this gate that went to the Clary Ranch where I used to live in a hunter’s cabin down below. There’s now a big house up on the hill to the left and the paved road used to be dirt. Lake Sonoma is down in the valley behind the gate. 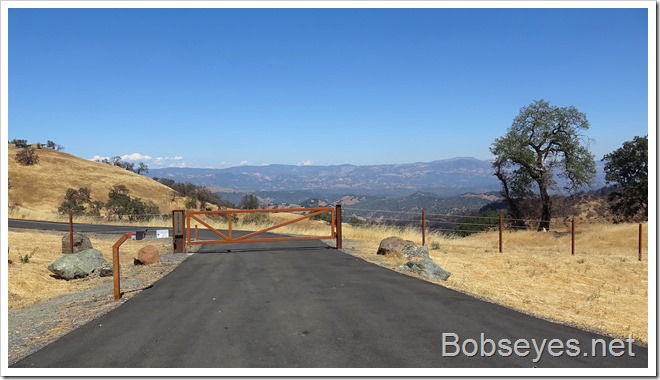 I walked through the gate just a bit to have a look over the side into that canyon where I used to live where the forest fire burned through and burned the house down. I could also see the Clary  house which was still standing and didn’t get burned but I bet the other houses on the ranch did.

I lived down in that canyon which is above the lake, for about ten years. 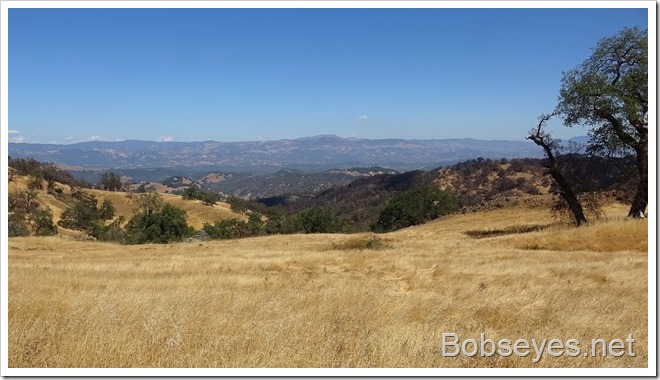 Here’s the old van parked by the gate. You can see this area is at the Top of the World. 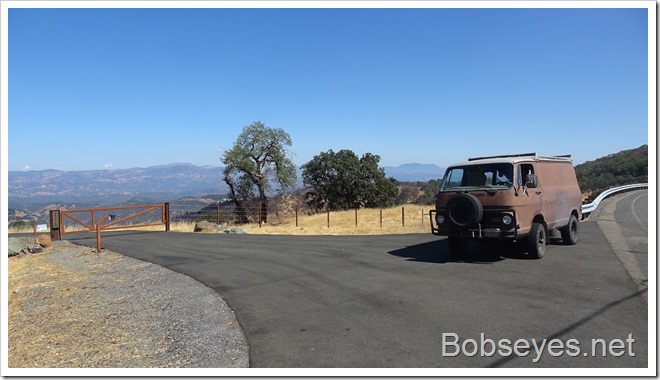 I turned around there and headed back down the hill and stopped here at the Merlo ranch where I also worked for about 4 years building roads and ponds and stuff like that. 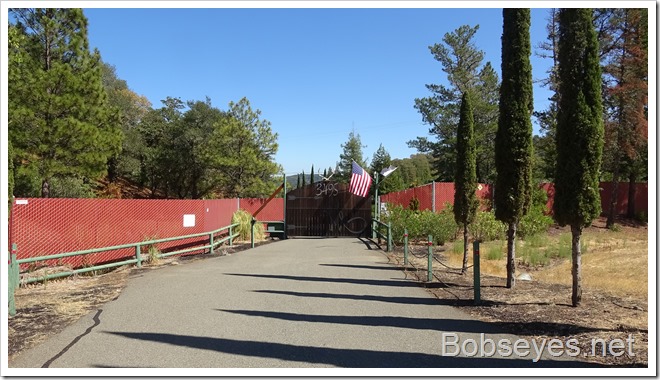 I stopped and got out but I didn’t see anyone around so decided to go down the road a bit more where I saw an open gate on the way up.  I drove in there and by their shop but no one was around. They grow grapes here now and are likely harvesting.

I didn’t have enough time to drive down into the ranch to look for Harry as I needed to visit one more person today so I turned around in his vineyard and left.

I hadn’t seen my friend Joe for quite a spell so I headed to his house which was on the way.

Joe was home making coffee so I joined him for a couple cups and we shot the bull for an hour or so before it was his dinner time so I headed on home stopping at a local gas station to fill up the van so it’s ready to roll for this trip next week.

All in all I was very pleased how the van worked out. I’m pretty sure the heat problem is fixed. The engine dying problem is not fixed……..but.

Carl in comments suggested the engine dying and hesitation problem may be the fuel pump as he had a similar problem for years until he changed the fuel pump which cured the problem. Thanks Carl.

So I’m thinking it may be the fuel pump alright so I will purchase a new fuel pump and fuel filter to take with me on the trip just in case. The problem seems to clear up mostly as I used it so maybe it will clear up using it.

Once home a nap was in order and I let the chickens out after my nap.